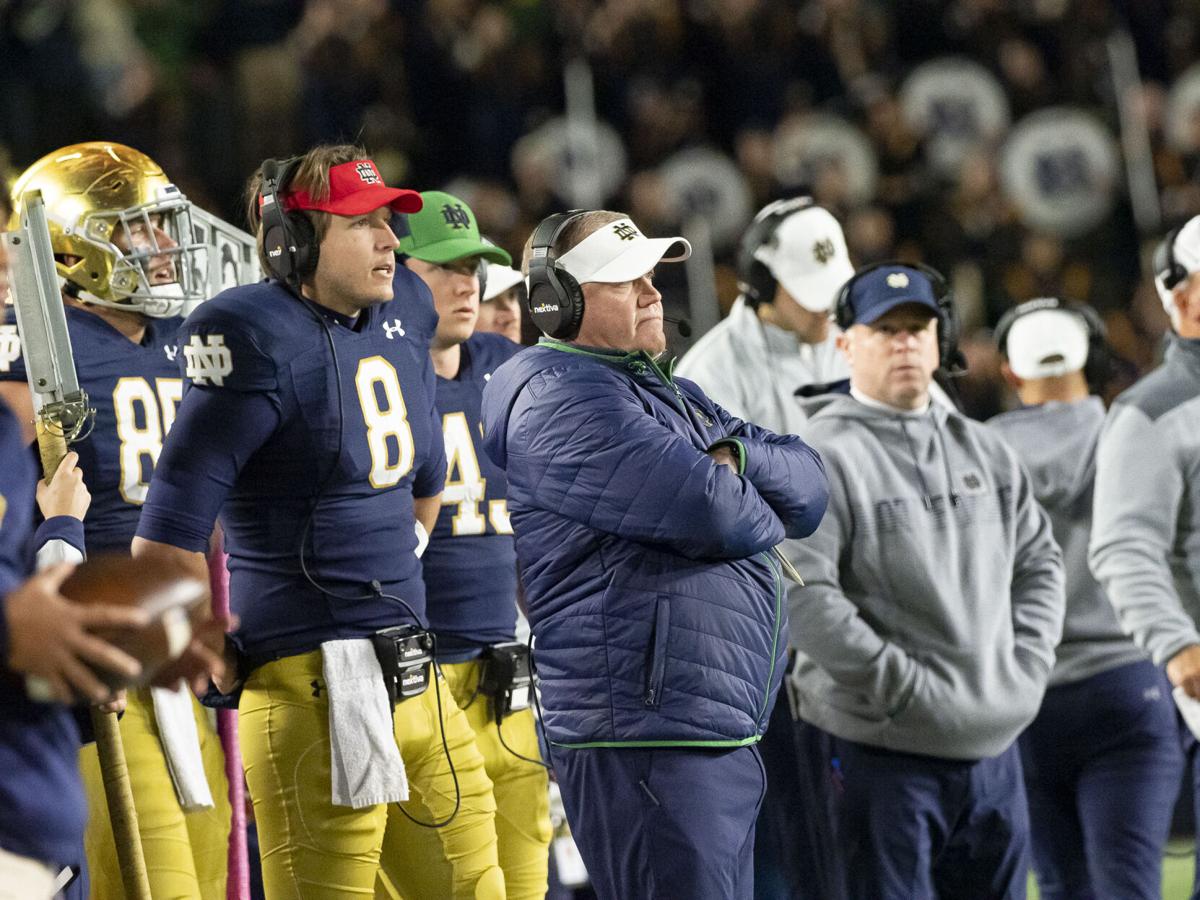 Notre Dame head coach Brian Kelly looks on during a game against USC on Oct. 23 at Notre Dame Stadium in South Bend. Kelly, 60, has agreed to a new 10-year, $95 million contract to become the head coach at LSU. 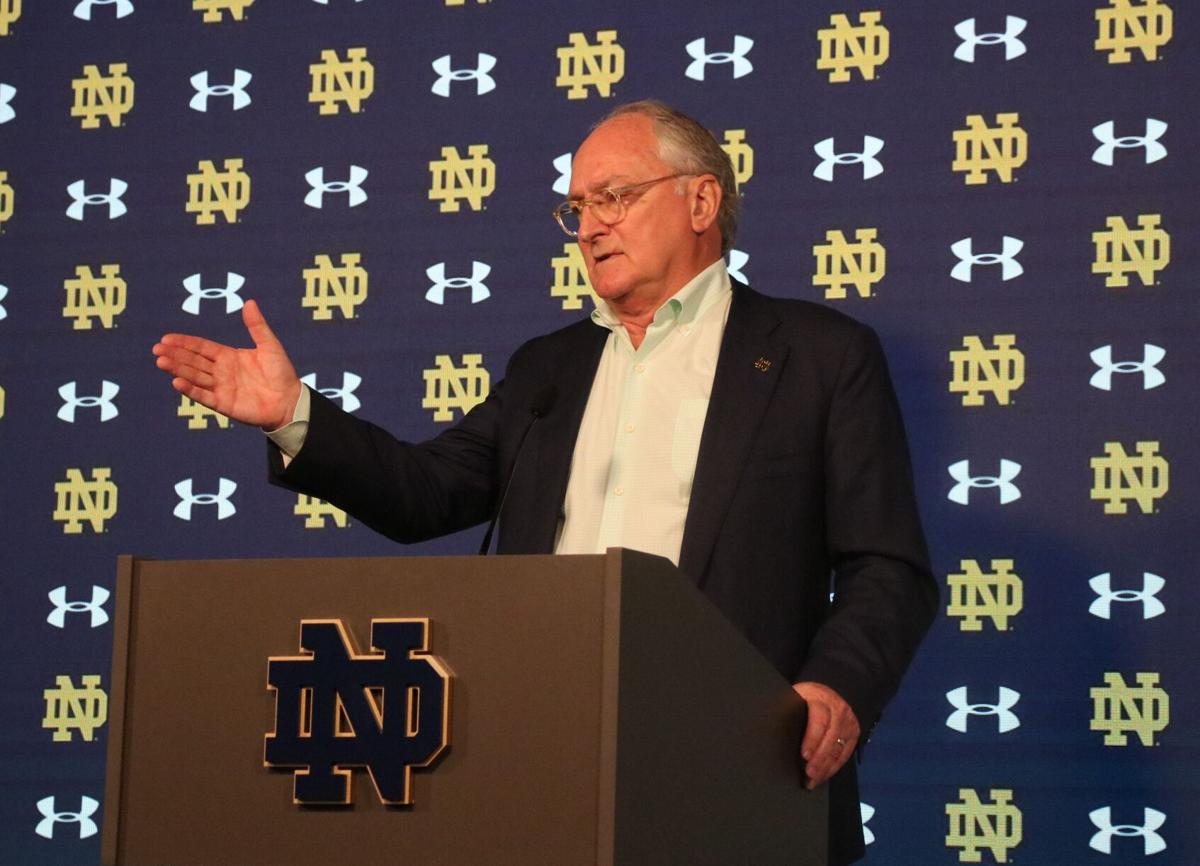 Notre Dame Athletic Director Jack Swarbrick speaks at a news conference Tuesday about the departure of Brian Kelly as the head football coach at Notre Dame.

Notre Dame head coach Brian Kelly looks on during a game against USC on Oct. 23 at Notre Dame Stadium in South Bend. Kelly, 60, has agreed to a new 10-year, $95 million contract to become the head coach at LSU.

Notre Dame Athletic Director Jack Swarbrick speaks at a news conference Tuesday about the departure of Brian Kelly as the head football coach at Notre Dame.

Kelly is leaving the Fighting Irish program to take the head coaching job at LSU. A press release from LSU Tuesday morning announced that Kelly, 60, agreed to a 10-year, $95 million contract, with incentives that could bring Kelly more than $100 million total over the span of the contract.

“I could not be more excited to join a program with the commitment to excellence, rich traditions, and unrivaled pride and passion of LSU Football,” Kelly said in the statement released by LSU. “I am fully committed to recruiting, developing, and graduating elite student-athletes, winning championships, and working together with our administration to make Louisiana proud. Our potential is unlimited, and I cannot wait to call Baton Rouge home.”

Kelly became the winningest coach in Notre Dame history this season, amassing a 113-40 record overall in 12 seasons with the Fighting Irish. During that time, Notre Dame had three undefeated regular seasons during that span (2012, 2018 and 2020), all of which resulted in either a BCS Championship Game or College Football Playoff appearance for the Irish. He only had one losing season, 2016, and Notre Dame has won 10-plus games in five-straight seasons since then, the first time that’s been achieved in program history.

“Brian Kelly is the epitome of a winner,” LSU athletic director Scott Woodward said. “He has built and sustained success at every program he’s led, from multiple undefeated regular seasons and National Coach of the Year honors to national titles and College Football Playoff berths. His credentials and consistency speak for themselves.”

The news of Kelly’s departure was first reported Monday night by Yahoo Sports’ Pete Thamel. Other media reports then confirmed Thamel’s report, with The Athletic’s Pete Sampson reporting a message Kelly sent to his players Monday night saying he was leaving Notre Dame. A meeting between Kelly and the players was held at 7 a.m. Tuesday, with reports indicating the meeting lasted less than 10 minutes. According to Tyler Horka of Blue and Gold Illustrated, Kelly left the Notre Dame facilities at 7:11 a.m.

“On behalf of the University of Notre Dame, I want to thank Brian Kelly for a wonderful 12-year run as our head football coach. He led our program to great success and we wish him and Paqui the very best. Notre Dame football is one of the most storied programs in the nation and our next coach will continue a winning tradition that reflect the university’s values.”

Notre Dame Athletic Director Jack Swarbrick held a press conference Tuesday morning, answering a variety of questions about why Kelly left and who the next head coach will be. Swarbrick noted how different the job search is for him this time around than the one he conducted to hire Kelly in 2009.

“I couldn’t be more pleased with the difference I see today as I embark on another search,” Swarbrick said. “In my 14 years (as athletic director), this program has never been in better shape. We have never been in a better position to take the next step in building this program into a consistent contender for national championships, and I am excited with the opportunity to attract the next leader to do that.”

Swarbrick also mentioned that he wasn’t surprised that Kelly decided to leave now.

“There’s just a sense you get when you work closely with someone for 12 years that there’s a certain restlessness, and I could sense that,” Swarbrick said. “I could sense that in some conversations. There was a Freudian slip or two along the way that sort of grabbed my attention, and whether that was intentional or not, you just felt like somebody who may be open to a different opportunity.”

As far as an interim head coach was concerned, Swarbrick said he didn’t have one lined up as of Tuesday morning. Swarbrick actually mentioned that they might not name an interim head coach; rather, have the current assistants on staff work cumulatively to fill that role. The Notre Dame assistant coaches have been out visiting recruits all week, and Swarbrick insisted to them to stay on the road for the time being and keep doing the work they’ve been doing.

The timing of Kelly’s departure seemed to be the most shocking, as the Irish still have a chance to make the College Football Playoff this season. They were ranked No. 6 in last week’s CFP poll and are expected to either stay there or move up a spot when the new poll comes out Tuesday night. With an 11-1 record, Notre Dame could find itself getting one of the top-four spots should there be upsets during conference championship week this weekend.

Swarbrick confirmed that Kelly will not be coaching Notre Dame in a bowl game, whether that be in the College Football Playoff or not. Swarbrick also said there is no set timetable for when the next coach will be hired and that an outside firm will not be hired to help conduct that search.

Swarbrick said he hadn’t contacted anyone about the opening as of Tuesday morning, but there had been plenty of outreach to him. Some of the top reported candidates for the job are Iowa State head coach Matt Campbell, Cincinnati head coach Luke Fickell and current Notre Dame defensive coordinator Marcus Freeman.

“Fit at Notre Dame is number one,” said Swarbrick was the top characteristic he was looking for in the next head coach. “This is a unique place, and it is important that you understand and appreciate the uniqueness, so that’s a critical element of this. Increasingly, the role of college football head coaches is a CEO role, and so clearly understanding your approach to building and managing staff becomes very important.

“Next, what’s your approach to playing the game? What’s your style, what do you do, how do you achieve victory on the football field? And then a whole list of things that relate to attracting and developing great student-athletes, and especially the development part of it. I’m really pleased with where our recruiting is today and the improvements we’ve made in it; the resources we’ve put into it. But I still want to be a great development program, and so, what are your ideas on developing young men to be great players, great champions and great parts of our community?”

This story has been updated with reaction from Kelly, Woodward, Jenkins and Swarbrick.