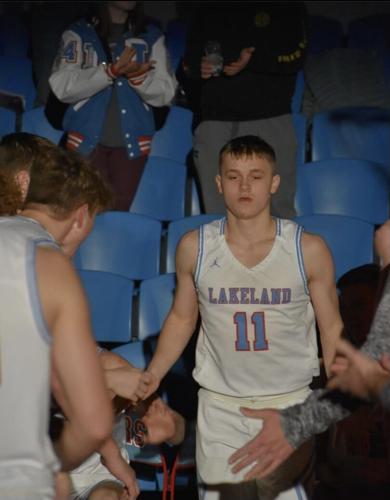 Lakeland’s Mark Wells is introduced before a game last season. While he’s taken breaks from football and baseball in the past, basketball is the sport he’s played the longest. 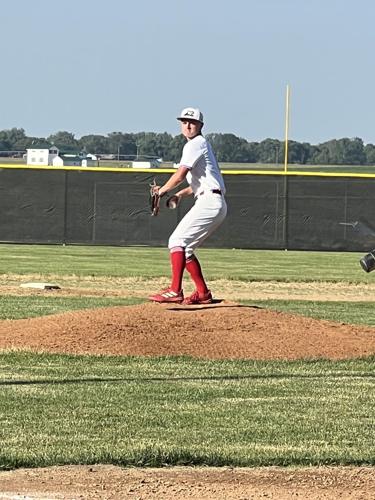 Lakeland’s Mark Wells pitches from the mound during a game last season. Since returning to the sport his sophomore year, Wells has played multiple positions, including left field and third base.

Lakeland’s Mark Wells is introduced before a game last season. While he’s taken breaks from football and baseball in the past, basketball is the sport he’s played the longest.

Lakeland’s Mark Wells pitches from the mound during a game last season. Since returning to the sport his sophomore year, Wells has played multiple positions, including left field and third base.

Lakeland’s Mark Wells wants to go into his senior year without any second thoughts.

That’s why for his final year as a Laker, he’ll be a three-sport athlete.

Wells has been involved with baseball, basketball and football on-and-off throughout his life, but he hasn’t played all three simultaneously since he was in middle school.

Of the three he’ll be taking part in this year, Wells labeled baseball as the one sport that means the most to him.

“Baseball’s definitely my favorite sport,” Wells said. “I played growing up until my sixth grade year. I stopped playing because of the amount of time it took away from my family. But as the years went on, I just found myself missing it more and more.”

Wells didn’t have much of a chance to shake off any of the rust he’d built up during the gap from sixth to 10th grade. His first year back, he was thrust right into the starting lineup.

“I actually started right away,” Wells said. “To be honest, I picked it up again really fast. Baseball’s been something I’ve always excelled at. It helped with the way my teammates welcomed me back. I kind of ran with it after that.”

Over the last two seasons since his return, Wells has been plugged in at spots all across the diamond. He’s seen time at all three positions in the outfield, at third base, and he’s even had the opportunity to take the mound and pitch here and there.

Of all the positions he’s come to know, he has one in mind that outweighs the rest.

“I’d say playing left field is my favorite spot,” Wells said. “It’s just one of those spots on the field where you can make a lot of the diving plays and kind of hype your teammates up. It’s a position that I’ve just really grown to love the most.”

Similarly to baseball, Wells will be making his return to the gridiron this year simply because he misses being involved.

Wells has a history of playing football, but he’s been away from the game since he stopped throwing on the shoulder pads in seventh grade.

With just one year left in his high school career, he wants to give it another go before graduating.

“It’s going to be my senior year, so I guess I might as well go out doing what I want to do,” Wells said.

While Wells has taken breaks from both baseball and football during his athletic career, the one he’s stuck with the longest is basketball.

Wells – a point guard on the court – credits the competitive nature of the game of basketball for his commitment to the sport.

To him though, the biggest influence to his longevity with the game are the relationships he’s built along the way.

While playing three sports is the plan this year, the future was unknown for Wells just six months ago.

Toward the end of his basketball season his junior year, Wells started experiencing some health problems that didn’t allow him to perform up to his maximum potential.

“It all started with high blood pressure,” Wells said. “A healthy kid at the age of 16, you wouldn’t think would have high blood pressure issues. I’d be running down the court, and all of a sudden, I just couldn’t go anymore. It was just really weird.

“I ended up getting some doctor’s appointments set up. I got an EKG done, and they cleared my heart, which was good. I still have higher than normal blood pressure, but we’re figuring out slowly what it is.”

Wells still doesn’t quite know what caused the high blood pressure, but he was able to play the entirety of the baseball season without any problems. He hopes that’ll continue to be the case as football season begins this month.

“It’s been on and off, but I think it’s gotten better,” Wells said. “During basketball season, it was giving me problems every practice. After that though (during baseball season), it didn’t really bother me much at all.”

Some people venture off to various colleges, while others take a different route.

Wells won’t rule out the possibility of college for himself, but currently, he has something else in mind.

“Going to college for a sport wouldn’t be a bad option, but I’ve always had a dream of starting my own business,” Wells said. “I want to maybe do lawn care, if I decide to go the business route.”

His interest in lawn care is a recent endeavor for Wells, but his passion for helping others, while also wanting to do something he cares for, has him set on the idea of a lawn care business into the future.

“My interest with it started pretty recently,” Wells said. “I started mowing lawns and doing some yard work about a month ago, and I’ve been thinking that I’d really like to do it as a full-time job. I just want a job I’m not going to regret doing every day. That’s my biggest thing, I want to enjoy life, and I want to enjoy the work I do. Sitting in an office isn’t really for me. It is for some people, but not for me.”