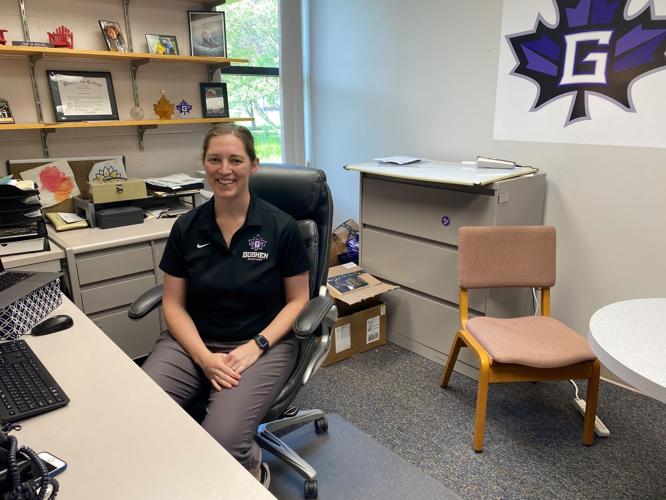 Erica Albertin has been the permanent athletic director at Goshen College now for more than a year. She said she is proud of the growth the athletic department has made in the past 12 months, both on and off the competition fields. 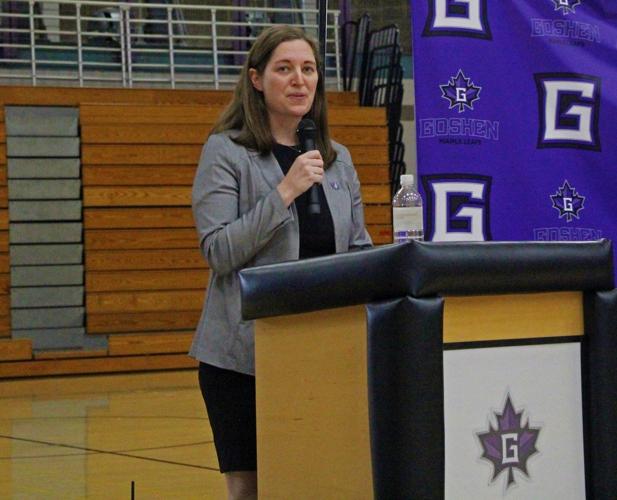 Dr. Erica Albertin speaks to the gathered crowd after being introduced as the new Goshen College athletic director in this April 19, 2021 file photo.

Erica Albertin has been the permanent athletic director at Goshen College now for more than a year. She said she is proud of the growth the athletic department has made in the past 12 months, both on and off the competition fields.

Dr. Erica Albertin speaks to the gathered crowd after being introduced as the new Goshen College athletic director in this April 19, 2021 file photo.

GOSHEN — Erica Albertin has a lot going on these days.

The Goshen College athletic director has officially been in her role for a little more than a year now after serving as the interim AD from late February 2020 to mid-April 2021.

Along with her day time job, she’s busy at home raising two children under the age of five with her husband, Matt, and their two dogs. The chaos within the Albertin house has even led to injury, as Erica is currently wearing a walking boot to heal a broken foot sustained while chasing children and dogs around the house.

Through the busyness of her life, Albertin found time to sit down with The Goshen News Thursday to talk about her first 12 months as athletic director, her short- and- long-term goals of the position and much more.

Albertin: “Even as the interim in 2020-2021 with the pandemic, it was kind of like survival mode; like, let’s just keep trying to play and keep having students going to class and all of that. And so, in my first year as official athletic director, it feels like we’ve been able to get to a spot of, ‘Alright, this is really exciting, the potential we have.’ (Sports Information Director) Justin DeWeese was just looking up all these stats for me for a different project, and he was saying almost every single team has a more successful record than what they had a year ago. And, for me, that’s really exciting.

“It’s not all about winning, of course, but there is the element of the student experience. We’re trying to get on a path here to move up, both athletically and academically. We just got spring term grades and we have a higher overall department GPA than what we had in the fall, and that’s just a testament to the hard work of our 240 student-athletes, both in the classroom and the competition. For me, I can’t take the credit of that, but it’s been fun to sit in the chair of athletic director and be able to support our student-athletes and our staff like we have.”

Q: Is there anything you have done differently? I know you just said you can’t take credit for it, but are there things that you’ve tried to do or programs to set up to try and encourage that better academic and athletic performance?

Albertin: “With my athletic training background, there’s this holistic development and care of our students. The biggest thing for me was we partnered with RealResponse; it’s an online anonymous reporting system. Every first day of the month, it sends out a question to all of our student-athletes and asking if there’s anything, whether it be positive or negative, that administrators should know. And for me, that’s been super helpful to just get a pulse on where are those areas that we’re either really excelling in or an area that we can start fixing and making better. To be able to give our students access to that has been really helpful.

“Another one: we hired a yoga instructor (Karli Wendorf). She comes in and has been doing Zoom things; like team-specific things working amongst all of our teams. I’m not a huge yoga person, but I definitely understand the health benefits of recovery and the mental care, emotionally and spiritually, of yoga. I love that Karli is on staff now and able to help out our student-athletes in that way.”

Q: You’ve also had a chance now, as a woman in leadership, to do some talks on campus and gone other places as well to give speeches. How have you tried to use your platform for that, too?

Albertin: “There’s not many female athletic directors across the divisions, whether it be NCAA or NAIA. I’m part of a group actually called Women Leaders in College Sports, and that’s just been great for networking and getting to meet people. It’s just been so fun; like I have a lot of our student-athletes come in and sit in my office and say things like, ‘I never thought I could be an athletic director, but now I see you here being a mom and also doing athletic directing and being able to merge these things together.’

“That’s part of why I love working at Goshen: the people’s support. It takes a village, and it’s not just me and my husband and the kids. Instead, it’s all of us at Goshen, and for them to help me be joyful as much as I can on a day-to-day basis really allows me to be the best athletic director.”

Q: You kind of talked a little bit about how the on-field success has improved a little bit in the last year. How important is that? I know you want to compete in the Crossroads League and things like that, but where are the next strides taken in that regard?

Albertin: “I think it goes back to doing the little things right. What does it look like to be excellent on a day-to-day basis? It’d be awesome to go out and win the Crossroads and win a national championship, but to get to the next level, it does look different for each of our teams. And so, the winning piece — I was an athlete when I was a student, and it’s not all about that — but there’s definitely an element of where that’s fun. It’s fun to be able to have someone like Ri (Koteles) set all of these softball records or have some of our runners that became All-Americans. So, there are these different pieces, and so for me, that’s been really fun to lead the department.

“And having (DeWeese) here to help tell the stories and elevate what we’re doing, how we’re doing and how we talk about Goshen Athletics — I want GC athletics to be known in the community, and not just as, ‘Oh, it’s just Goshen.’ We’re giving back to the community and trying to build this foundation of a culture of connection.”

Q: Part of what might help with that community involvement is getting some of these local kids to commit to the school, such as Goshen’s Drew Hogan, Concord’s Anthony Roberts and Fairfield’s Caleb Wright. How much do you think that’ll help grow that community reach and help Goshen College become more integrated within the community?

Albertin: “I’m definitely excited to have some of the local talent that’s coming up. It’s really fun to have that connection with the community and the families to where they know where Goshen has been. I think that some of these student-athletes coming in can really play a piece in developing and setting this culture of success that we’re trying to do. And then hopefully, more and more local students will be able to come and be a part of what we do here.”

Q: Specifically more about the on-court success, you’re currently searching for a new men’s basketball head coach. Any insights on what you’re looking for with that position?

Albertin: “It’s definitely a big hire, but I’m excited for it. Of course, Jon (Tropf) did a lot of great things for us and we really appreciated having him on staff here. But moving forward into the future, we’re trying to find the best person and the best fit for Goshen College and specifically for the men’s basketball team. We’re just trying to bring someone in with a high level of character. Someone that can step in that has their vision that aligns with mine, both as the athletic director and with the school, and be able to develop our students into future leaders is important.

“I’m really excited about the candidates that we’ve interviewed so far just on Zoom. We’re planning on some on-campus visits soon as well. So, I’m excited to see that.”

Q: What are some of your goals for next year, as well as the bigger picture? What do you hope for the future of Goshen College athletics?

Albertin: “Long-term, I envision Goshen College athletics to be a place where we can bring in students — both local students and from all across the country and the world, too — and be known as a place where we develop not only great athletes, but great students who can turn into people that actually impact the world. Really, I’m just excited how Goshen athletics can play into that.

“For me, being a former soccer player, the soccer field served as a great learning lab. I learned how to be a really good teammate, communicator and being able to set those goals and vision. I want to continue to see us at Goshen bring in those types of athletes that can contribute not only to the athletic department, but to the school as well.

“In the short term: obviously, this new men’s basketball head coaching hire is important; getting the right person and the right fit here to really start developing that program. And also, continuing to raise the tide. There’s been some bits and pieces of it with the success that we’ve seen, but to try and get more and more success to our staff … that’s one of the biggest goals.”