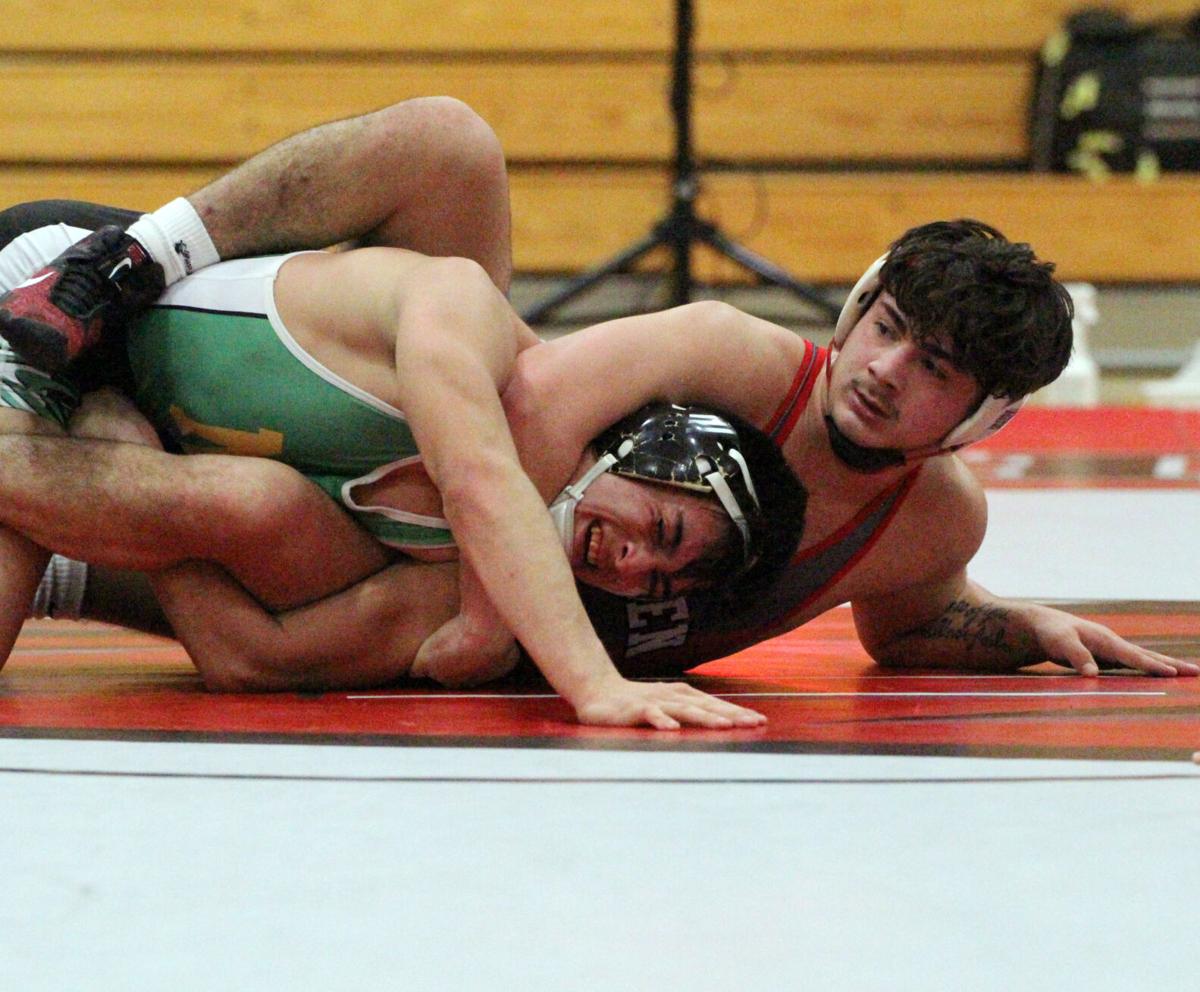 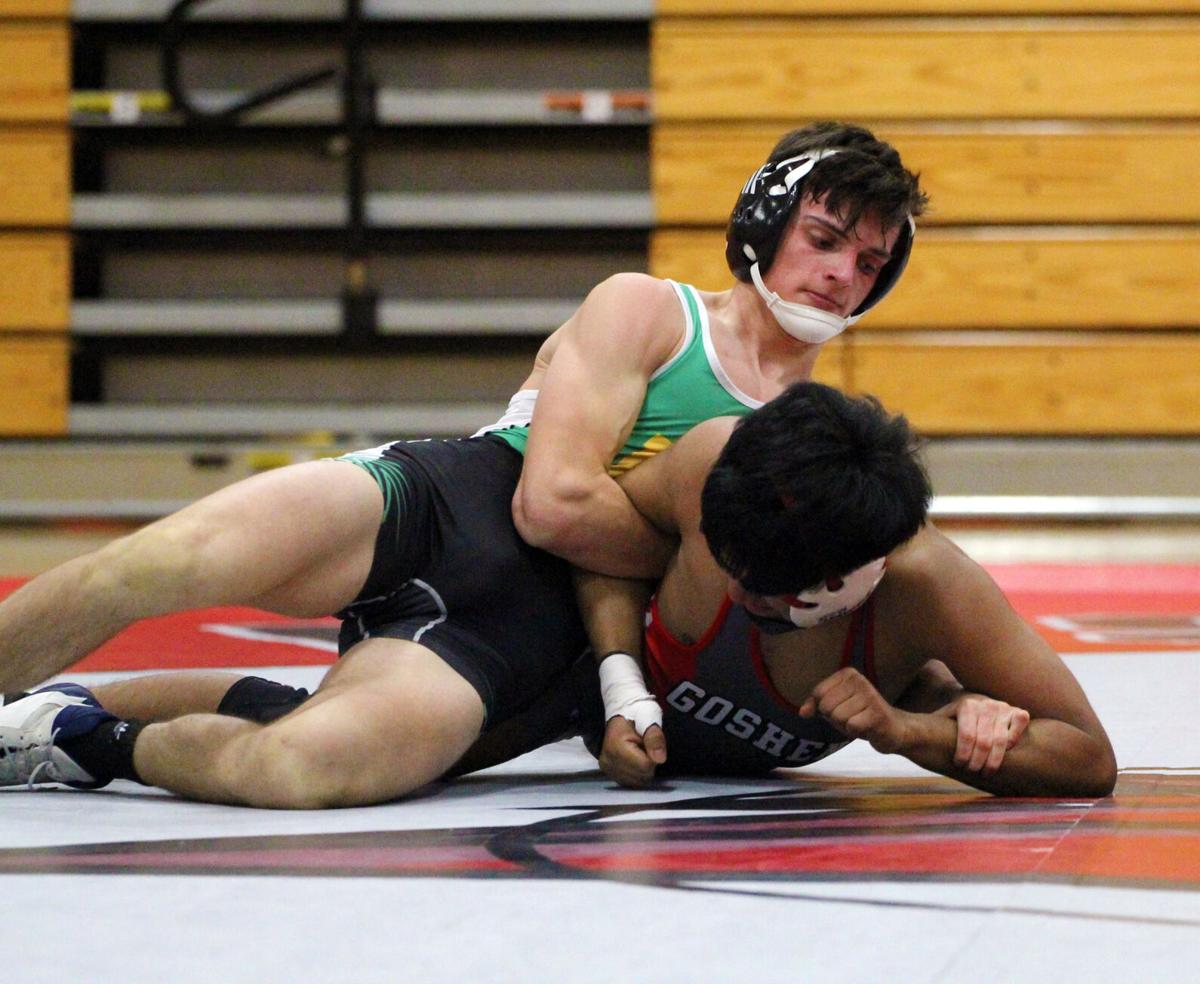 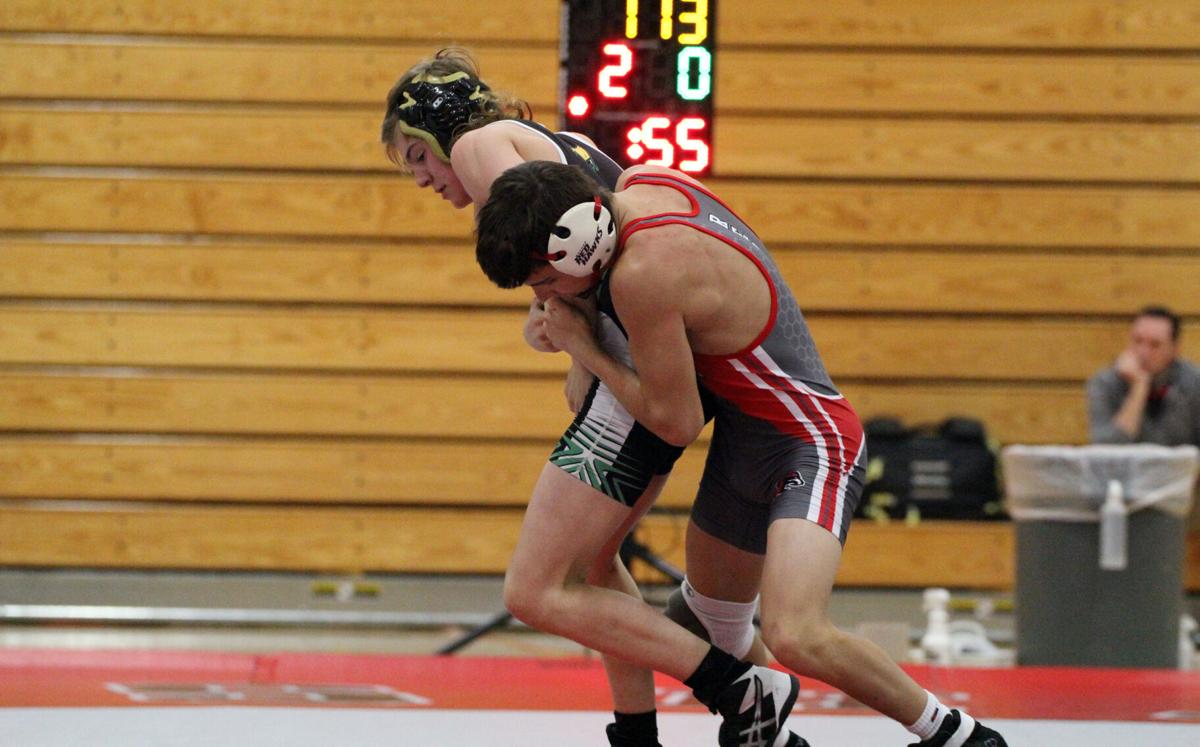 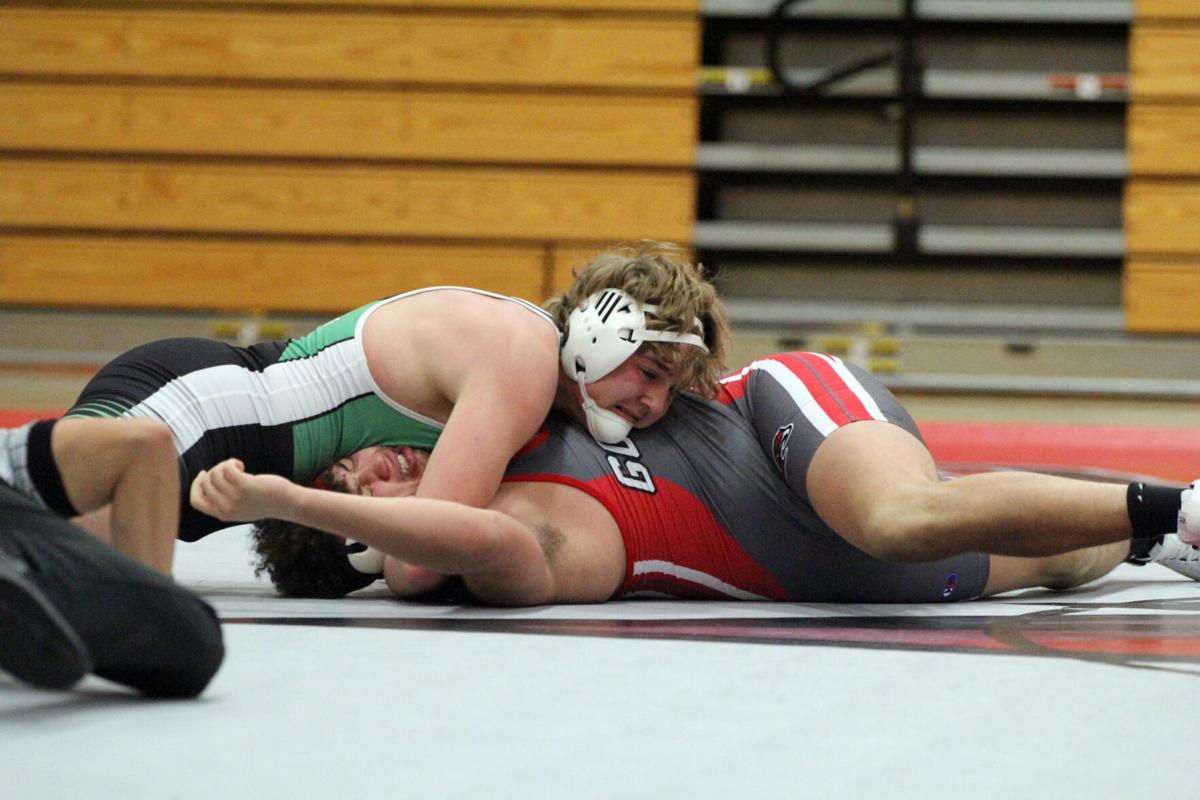 GOSHEN — In the 11 weight classes wrestled between Goshen and Northridge Thursday night at Goshen High School, the Raiders emerged victorious in six of them.

Unfortunately for the visitors, the three weight classes that didn’t compete — 106, 120 and 285 — all ended up going down as forfeit wins for the home RedHawks. This gave Goshen 18 free points, which was enough for them to win the overall team dual by a score of 40-27.

Given the wrestling started at the 182-pound weight class, the scoring set up where Northridge trailed in the team score 33-6 heading into the second half of the dual. From there, though, the Raiders chipped away at the RedHawk lead, winning five-straight matches to cut the deficit to six.

It started at 126 pounds, as sophomore Graysen Beasley scored with 10 seconds left in his match to win, 4-2. Senior Jasper Graber then gutted out a 3-2 win at 132 pounds to make it a 33-12 contest. A pin at 138 pounds by junior Jeffery Hill made it 33-18. Junior Garrett Von Gunten cruised to a 9-2 win at 145 pounds, making it 33-21. The 152-pound match featured one of the more dramatic endings of the evening, as junior Cael Arroyo squeezed out a pin with two seconds left in the match.

This left the team score at 33-27 heading into the final two weight classes of the night.

“All of them are wrestling really well,” said Northridge coach Trenton Bixler of his middleweight wrestlers. “All of them are hitting their strides, and that’s a good time to, especially with the postseason right around the corner. I’d say if I had to pick one (that stood out Thursday), I’d have to go with Garrett. He’s a team captain this year, and he’s done great. It’s his first year in the varsity lineup, so a lot of this is a new experience for him. So, for him to wrestle as hard as he is with the competition and all the adversities, it really sticks out to me.”

Goshen would go onto win the final two matches, though, to escape with the team victory. Junior Alex Parga clinched the win for his team at 160 pounds, scoring two points in the final round to win 4-2 over Northridge junior Jaiden Medina.

“He came through,” said Goshen coach Jim Pickard of Parga’s performance. “He wrestled a very smart match. The kid was getting physical with him, and he usually gets hot-headed. He controlled that. He’s just got to control things and let things happen. He wrestled well.”

RedHawk sophomore Laish Detwiler then closed out the evening with an 11-1 major decision victory.

Goshen started the contest with a 7-6 win from sophomore Jonathon Flores. Sophomore Samuel Vargas-Ortiz then picked up Goshen’s first pin of the night in the 195-pound match to extend the lead to 9-0.

The 220-pound match featured the biggest swing of momentum from the contest, as Goshen senior Braxton Burns built up a 7-1 lead after the first round — only for Raider freshman Travis Henke to storm back in the second and pick up a pin fall victory.

“For a freshman, he shows a lot of grit,” said Bixler of Henke. “That’s something that we’re very proud of because you can’t teach that. … Just a tough kid. He wrestled his heart out in the second period and got the pin.”

Sophomore Cole Hinkel’s pin at 113 pounds was the only other pin for Goshen, putting the RedHawks in firm control of the match and setting up the events of the second half of the dual.

Northridge is finished with dual meets for the season, closing out at 8-12 overall and 2-5 in Northern Lakes Conference contests. They will now get ready for the NLC championship meet, which begins at 9 a.m. Saturday at Wawasee High School.

“Just have fun, learn from our mistakes that we’ve made all year and hopefully make some noise Saturday,” said Bixler is what he’s hoping for out of his team at the NLC tournament. “That’s all there is too it.”

Goshen is now 16-6 overall and 2-2 in NLC duals. Even though they have the NLC championship tournament Saturday, the RedHawks will still have two more regular season conference duals next week against NorthWood on Tuesday and Wawasee next Thursday, Jan. 20.

“It’s never been like this,” said Pickard of his team’s upcoming schedule. “… This has been worse than it was last year. We have not had a full lineup yet. At least we weren’t missing six of seven guys (Thursday) like we have been. It is what it is, and it’s just be a long year. … Hopefully we can compete (this Saturday). We came through and competed last Saturday; wrestled a lot better. We got some confidence.”