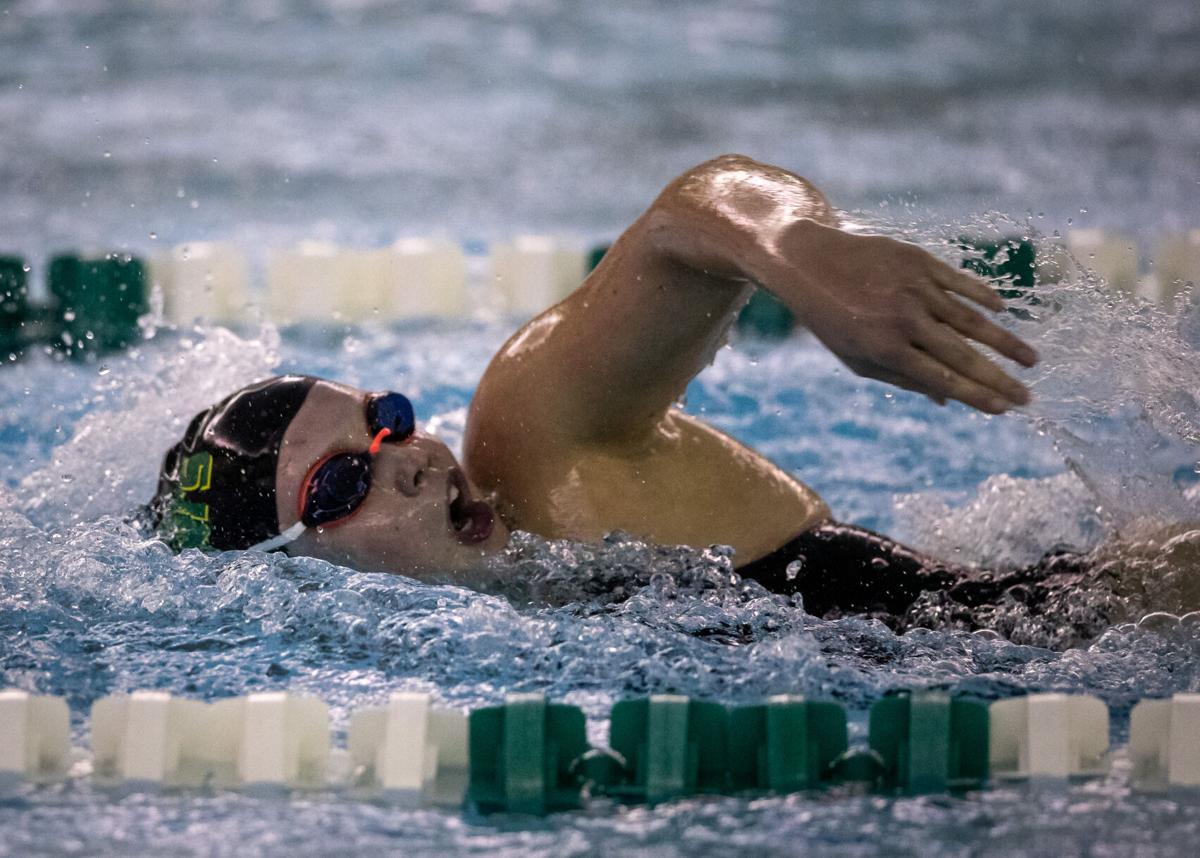 Northridge sophomore Sydney Nethercutt wins the 50-yard freestyle race against Concord last Thursday at Concord High School in Elkhart. The NLC girls swimming championships this week will be contested under a unique setup, with Northridge and Concord both hosting prelim races this Thursday. 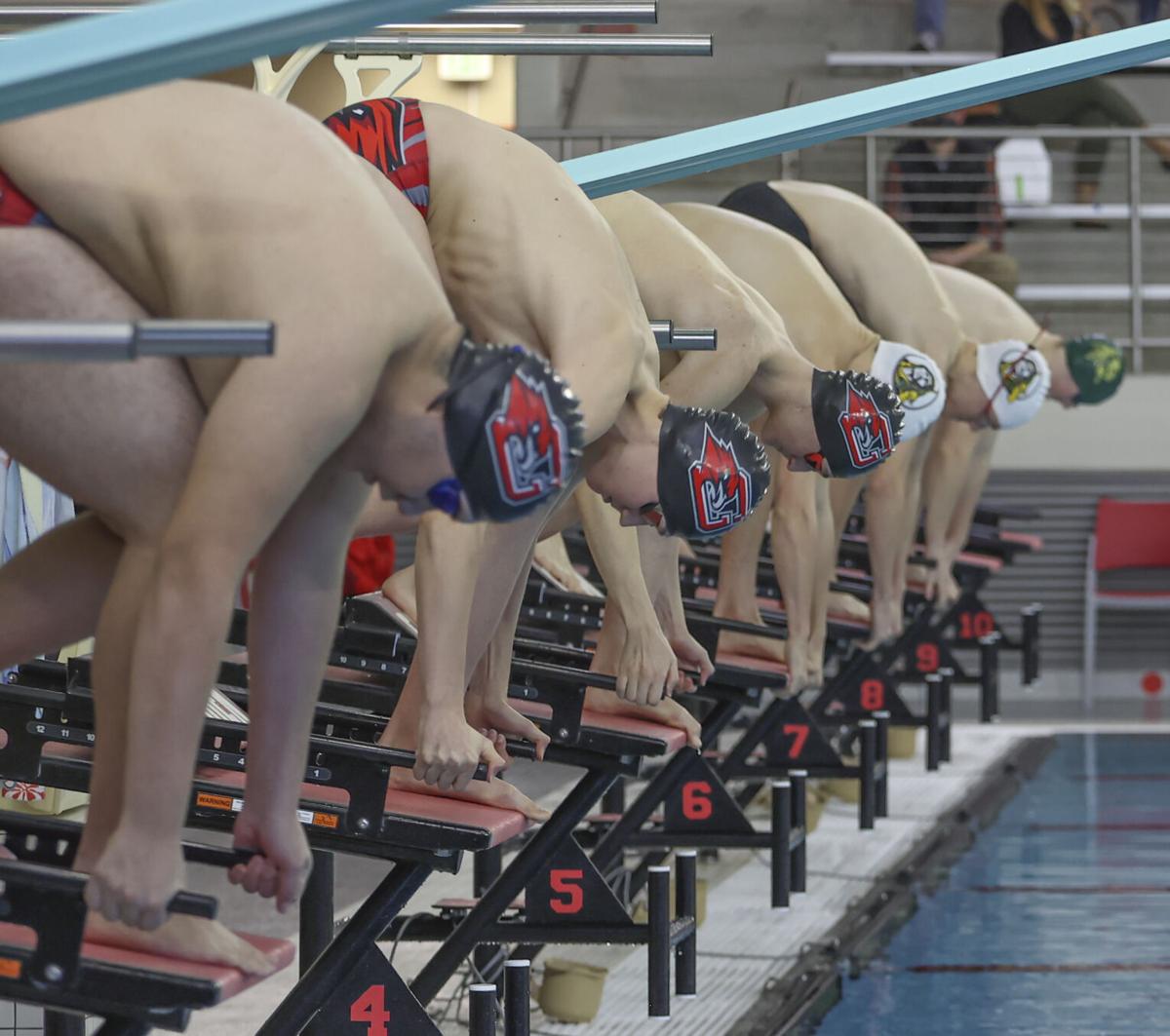 Boys swimmers from Goshen and Wawasee get ready to race during Saturday’s meet in Goshen. The NLC boys swimming championships, contested from Jan. 28-30, will follow the same format as the girls championship races this week.

Northridge sophomore Sydney Nethercutt wins the 50-yard freestyle race against Concord last Thursday at Concord High School in Elkhart. The NLC girls swimming championships this week will be contested under a unique setup, with Northridge and Concord both hosting prelim races this Thursday.

Boys swimmers from Goshen and Wawasee get ready to race during Saturday’s meet in Goshen. The NLC boys swimming championships, contested from Jan. 28-30, will follow the same format as the girls championship races this week.

In a year where mostly everything has been changed, the Northern Lakes Conference swimming championship meets will be altered as well.

That means this week’s girls swimming championship will look as follows: swimming prelims at Concord and Northridge on Thursday, diving prelims and finals Friday at Concord, and then swimming finals Saturday at Concord. The Thursday and Friday festivities begin at 6 p.m., with Saturday’s finals starting at 1 p.m.

The boys swimming championship races are Jan. 28-30. They will be held at Concord and Northridge as well, but Northridge will host the Friday and Saturday portions instead of Concord.

The format was changed this year in an effort to accommodate social distancing protocols brought on by the COVID-19 pandemic. For the prelims and diving portions, each school will be given 20 tickets that can be allocated to parents and fans.

Unfortunately, due to all eight teams being at one location Saturday, no outside spectators will be allowed inside Concord’s aquatic center for the finals. All events will be live streamed online through the Concord IHSAA TV page on a pay-per-view basis.

“It was the best way we felt we could get people into the stands, at least for the prelims,” Northridge Athletic Director Dave Harms said, who serves as the chairman for swimming in the NLC. “Each site can have 80 people there, which isn’t a lot, but it’s something. … It is going to be live streamed, and that gives us an opportunity to watch it and people to be able to observe it. I think it would be really, really hard to get to this point if we didn’t have that (live streaming) capabilities.”

The prelims have been split up by team size, competitiveness and location to the host school. The four teams swimming at Northridge are Goshen, Warsaw, NorthWood and Northridge, while the four teams at Concord will be Wawasee, Mishawaka, Plymouth and Concord.

Races will run at the same time at both schools. Results from Northridge will be sent to Concord immediately following each race, with people at Concord then tallying up the final results. The top eight times in each event advance to Saturday’s finals.

Harms said he and the rest of the NLC athletic directors have been discussing how to hold the championships since late October. The plans became official in mid-December.

“By no means is it perfect, and by no means is it anything that anybody really wanted to do,” Harms said. “But at the same time, it gives us the opportunity to do it … you still have to think about the pandemic.”

Coaches from across the NLC expressed varying opinions on how the championships will go this week.

“I think it’ll feel weird when half the meet’s in one place and the other half is at our place, but I think it’ll be kind of nice that we get to race at home,” Northridge coach Kyle Hembree said. “It’s really going to showcase those people that are racing the clock because, again, you’ve got half the meet 20 minutes away, trying to do the same thing. I think that aspect is kind of interesting.”

The NLC championship races are some of the most entertaining of the year, with each school’s swimmers and fans cheering as loud as they can throughout the event. While that won’t be the case Saturday, Concord coach Tom Johnson is just happy the races will be able to happen at all.

“It’s going to feel different on Saturday undoubtedly, but it still is an opportunity for the best kids in our conference to race against each other,” Johnson said.

Wawasee coach Jason Scott said the focus Thursday will be more on individual effort and not racing against others in the pool.

“We’re going to try to do what we’ve trained to do and swim our best races when we’re in the water; not worry about where everyone else is, wherever they’re at,” Scott said.

Goshen coach Mia Miller said she’ll be stressing to her team to focus on what’s happening with their swims at Northridge and not the other races going on at Concord.

“I want them to focus on the present, so they will just focus on who’s in their pool and we’ll kind of go from there,” Miller said. “Both pools are very equal in competition and talent, and so what we see at Northridge will be pretty indicative of what we’ll see again at Concord for finals.”

This story has been updated to reflect the correct website to stream the races at.