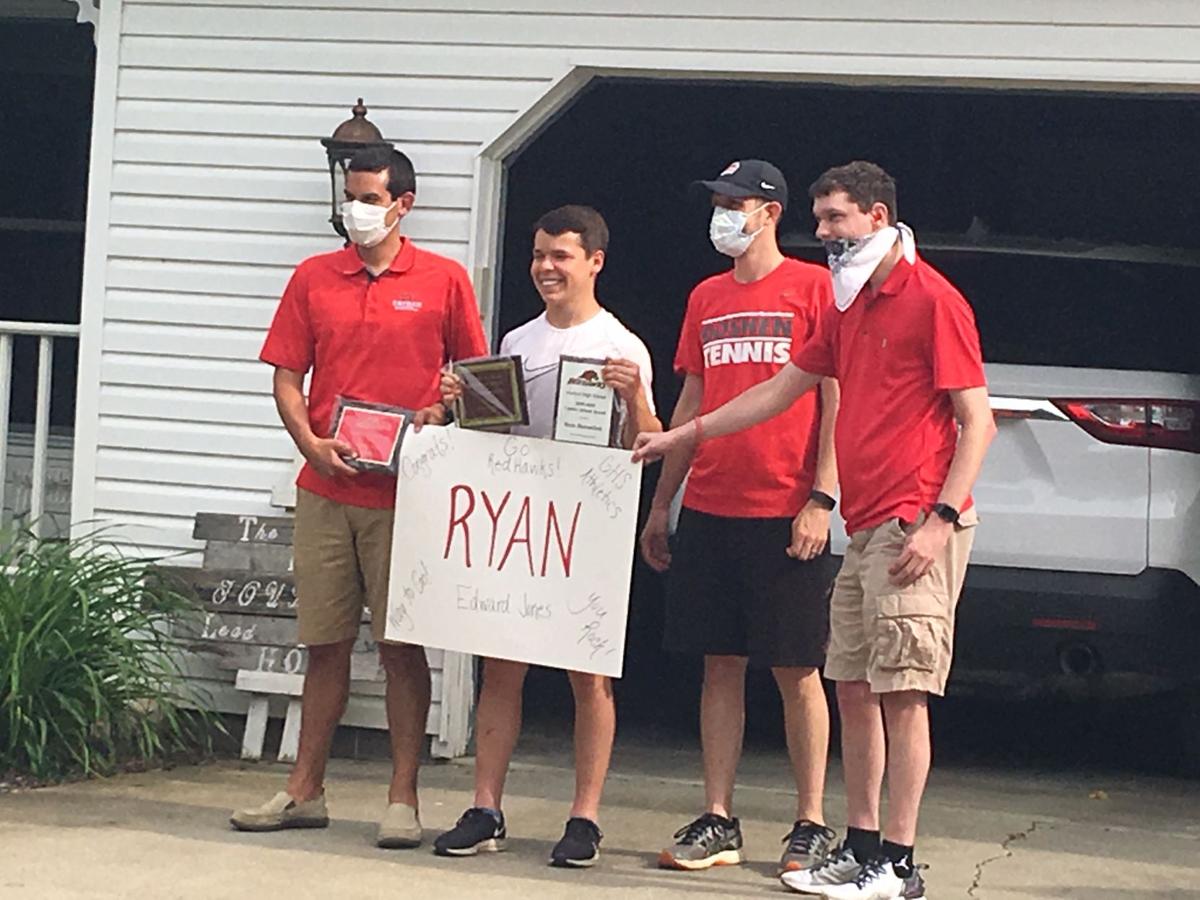 Ryan Harmelink, second from the left, has been named the Edward Jones Male Athlete of the Year at Goshen High School for the 2019-20 school year. Pictured with him, from left, are Goshen boys basketball coach Michael Wohlford, Goshen boys tennis coach Daniel Love and Goshen Assistant to the Athletic Director Tyler Miller. 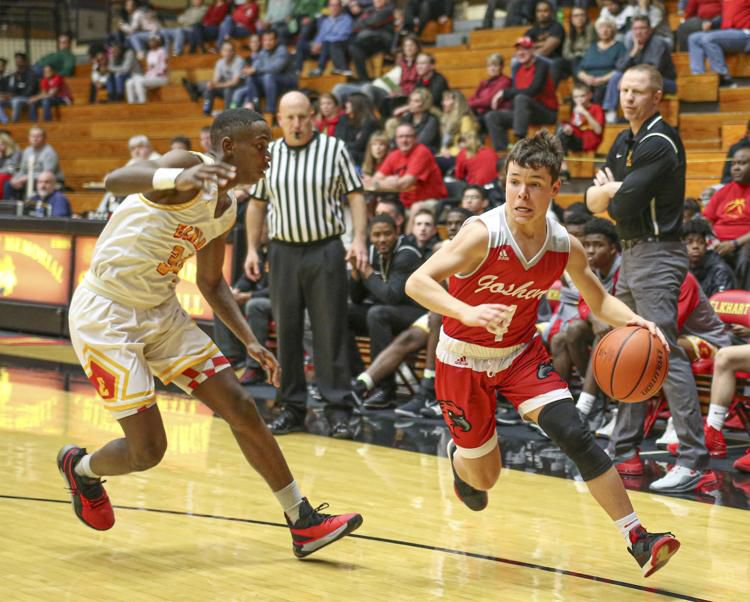 Ryan Harmelink, second from the left, has been named the Edward Jones Male Athlete of the Year at Goshen High School for the 2019-20 school year. Pictured with him, from left, are Goshen boys basketball coach Michael Wohlford, Goshen boys tennis coach Daniel Love and Goshen Assistant to the Athletic Director Tyler Miller.

GOSHEN — Ryan Harmelink was a talent on the boys tennis team, the boys basketball team and in the classroom at Goshen High School. For all of those accomplishments, the senior has received the Edward Jones Male Student-Athlete of the Year award for the 2019-20 school year.

“I was very thankful for each of my coaches along the way and grateful for all that I was able to do,” Harmelink said about the award.

He was listed as a 5-foot-6 guard on the boys basketball roster. While he may not have been the tallest player on the team, he without a doubt left an impact on the RedHawk program.

“I feel a higher power gave me my height. At times it was frustrating, but looking back, it is who I am,” he said. “It helped prepare me for life by teaching me not to give up. It has made me a stronger person.”

Both of his high school coaches were impressed with the drive and desire Harmelink showed in sports.

“Ryan is a special kid. He came out his freshman year not having played much tennis,” Goshen tennis coach Daniel Love said. “He put in a lot of time and worked his way up to No. 1 singles for his junior and senior seasons. His mental and physical toughness set him apart from other players.”

“Ryan is an impressive young man. He was one of our leaders at every level,” Goshen basketball coach Michael Wohlford added. “He commanded everyone’s attention because he worked the hardest. The reason other players listened to him was he was not asking anyone to do something he would not do.

“He was a mentor the last two seasons to Drew Hogan and Quinn Bechtel. Here is a guy who is teaching players younger than he is and that are getting more playing time than he is. His character shows that he was able to work with them, as does the respect they had for him in listening to him.”

Harmelink is a member of the National Honor Society, Fellowship of Christian Athletes, Student Athletic Council, Key Club, Stay in Bounds Ambassadors and his church youth group. He was named the Kiwanis Scholar-Athlete throughout his high school career.

The son of Erin and Tonya Harmelink, he plans are to attend Goshen College and major in Biochemistry and Molecular Biology.

“I get fulfillment from helping people so I am going pre-med,” Harmelink said. “I have not decided for sure what kind of doctor I would like to be, but surgery would be cool.”

Harmelink netted a total of 65 points as the RedHawks posted an 11-12 record in the 2019-20 basketball season. One of his memorable games was a 55-54 heartbreaking loss at West Noble this past season.

“I didn’t get to play much, but I did hit all four of my 3-point attempts for a career-high 12 points,” he said. “It was definitely my best game. I just felt like I couldn’t miss.”

“Ryan hit some key shots for us,” Wohlford said. “But more important was his leadership. He is one of the few teenagers that has already found his voice. He had an innate ability to teach. He could speak in ways guys would listen. He was a coach for us. He was one of the smartest players I have ever coached and also one of the hardest workers.”

Harmelink was the winner of the Beets Hoke Teamwork Award and the Derek Burkhead Memorial Award in boys basketball this past season.

Love remembered a memorable time when Harmelink was doing the plank drill in practice. The drill involves a player balancing themselves on their forearms and toes for as long as they came.

“Ryan went for 35 minutes, the next best on the team was 10 or 15 minutes. He could have quit long before he did. That is not in his nature,” the coach said. “We generally let the player that wins the drill sit out the next time we do it but Ryan would have none of that.

“Ryan is in great physical shape. He is super focused on nutrition, which is something you don’t see in many high school kids.”

Love shared a story about how Harmelink showcased his character in last fall’s NLC tennis tournament.

“Ryan was involved in a semifinals match with a player that was behaving not like you would want a kid to behave on the court,” the coach said. “The kid was taunting Ryan during the match. Later in the match, the kid starts to cramp and Ryan, instead of stooping to the other kids’ level, tells him to take as much time as he needs.

“Ryan ended up losing the match. He was crushed, but the takeaway was Ryan was not about winning at all costs, but about doing the right thing and conducting himself in the proper manner on the court.”

“I always want to be the good sport and take the high road,” he said. “I could have retaliated and gone down to his level, however, the sportsmanship and character you show in moments like that carry over to your life. I might have lost the match, but there was a bigger battle going on. “

The incident made such an impression on Love and the rest of the team that Harmelink received a special version of a team award at the postseason awards program.

“We have what we call the ‘DIG’ award that is given to the players who demonstrate dignity, integrity and grace,” the coach said. “We normally give the player a purple plastic shovel, but Ryan’s example made such an impression on us we bought a full-sized shovel and painted it purple.”

Not only were his tennis coach and teammates inspired by his performance on the court, but so was his basketball coach.

“I would go to tennis matches to support Ryan, but also found myself going for inspiration,” Wohlford said.