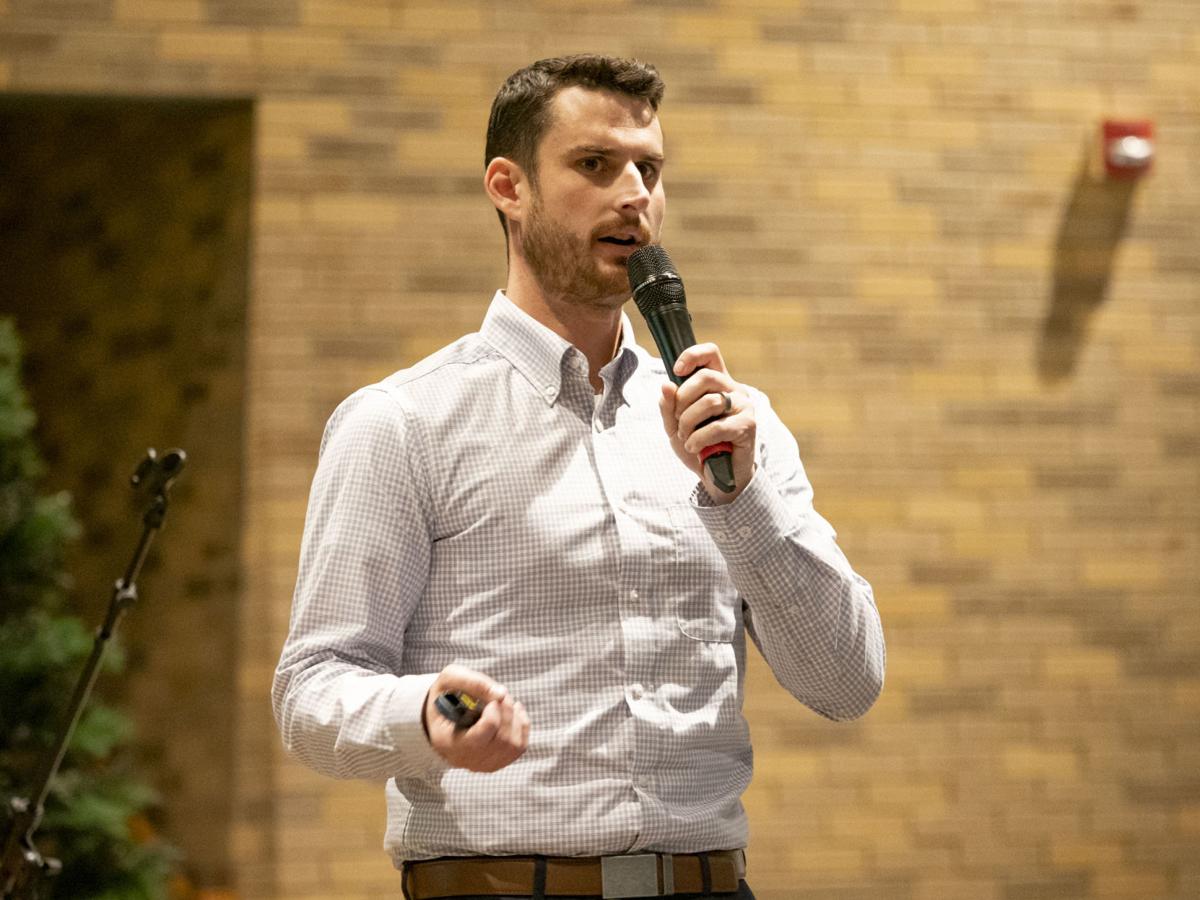 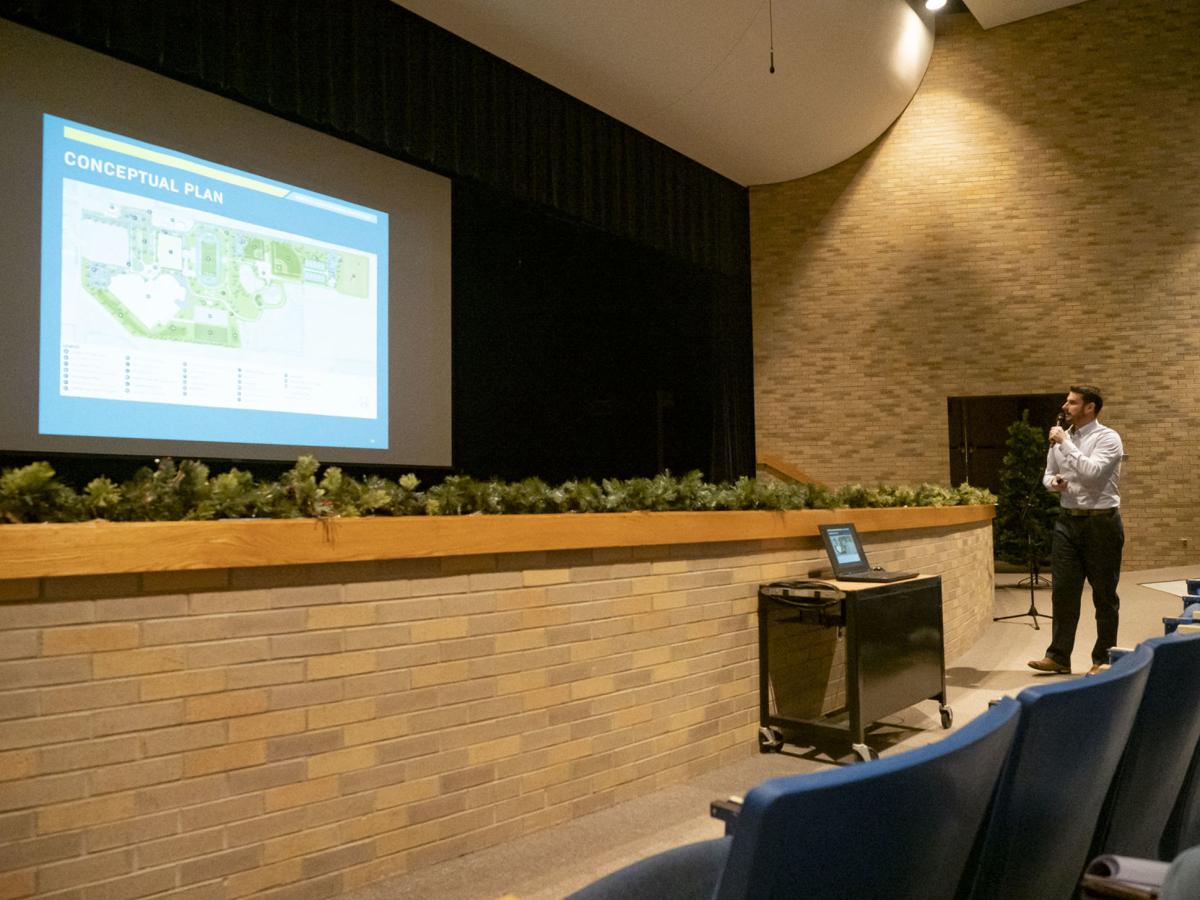 News Director of Architectural Services Andrew Cunningham of Jones Petrie Rafinski speaks to the public during the community forum about changes to the Fairfield Jr.-Sr. High School campus Thursday. 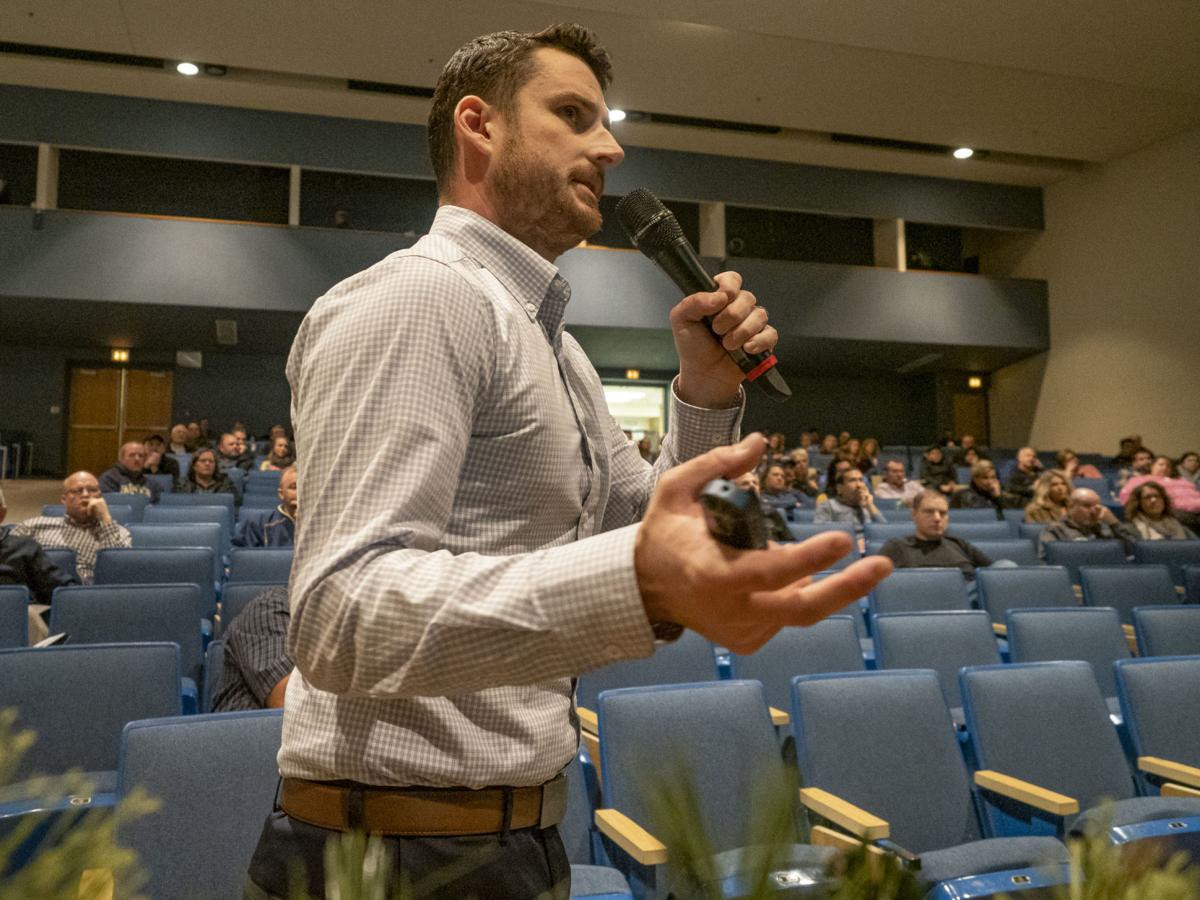 News Director of Architectural Services Andrew Cunningham of Jones Petrie Rafinski speaks to the public during the community forum about changes to the Fairfield Jr.-Sr. High School campus Thursday.

GOSHEN — When the decision was made at Fairfield Community Schools that there was a need for a long-range plan to improve the property, the school board had one priority above all others.

Safety of the students was placed at the top of the list.

“We have students crossing where school buses and cars are coming in to drop off or pick up kids,” Bruce Stahly, who served as Fairfield’s interim superintendent, said during a presentation to the public Thursday night. “That is not a good situation.”

A committee made up of administrators, teachers, coaches and members of the community was organized to work on a long-range plan in terms of site development.

There were three objectives the committee was charged with:

• Develop a strategic plan for future growth, development and efficient use of facilitates and space

• Identify opportunities to enhance the experience of students, athletes and the community

A list of 10 improvement opportunities was developed by the committee, which we presented to the community at Tuesday’s public meeting.

The main priority was the previously mentioned situation with the bus drop-off, parent pick-up and student crossing conflict. Others were a safer location for band practice, relocation of deteriorated tennis courts, optimal location for a regulation-size football practice field, identify existing land uses and opportunities for academic resources, exploring the need and opportunities for property expansion, a new concessions and restrooms facility, new fan entrance and ticketing gate, planning for possible future student activity center and converting the football field to artificial turf.

“Our hope is to make an impact on future generations at Fairfield,” 2005 Fairfield High School graduate Andrew Cunningham said.

Cunningham is an employee of Jones Petrie Rafinski, the firm hired by the school board to work on the project. Some of the local projects the company has worked on are the Elkhart River District Master Plan; the Waterford Mills Parkway; Four Winds Field, home of the South Bend Cubs; and the South Bend Cubs Performance Center.

According to Cunningham, the firm took a four-step approach to developing a plan of action. The first was discovery, gathering and analyzing existing data. The second was visioning, confirming the goals and objectives. The third was design, the envelopment of diagrammatic graphics. The final step was refinement, refining the plans and order of magnitude estimates.

The plane has been divided into two phases. The first one is projected to be in the $20 million range and the second close to $34 million.

Among the items in the first phase, in addition to the traffic situation, are relocating the tennis courts, finding an area for a full-sized practice football field, a new concession, locker room and restroom building, addressing the drainage issue on the baseball field and a new entrance and ticketing area.

“The tennis courts need to be replaced in the next year or two,” Cunningham said.

Among the items that could be included in the second phase is installing artificial turf on the football field and building a student activity center.

“The activities center could host student events, graduation and major athletic events,” Cunningham said. “The hope is for a competition-style gymnasium in the center.”

When questions were taken during Thursday’s presentation, it was brought up about what the projects would do to the local tax rate.

“We have looked at the numbers, but I don’t want to release any numbers until we are absolutely sure,” Stahly said. “One thing I can tell you is that we have the lowest tax rate of any school district in (Elkhart) County and it is going to stay the lowest.”

The question was also raised about maintaining the high academic standards the school system has established since, as the questioner pointed out, most of the projects involve athletics.

“I can assure you that the teachers and administration will continue those standards,” Stahly said.

Richard Evans is the current superintendent at Fairfield.

“Fairfield is a great place to learn,” he said. “We are bringing in students because of how attractive the academic situation is here.”

The entire plan will be on the Fairfield Community School’s web site.

People are encouraged to ask questions about the plans and those can directed to revans@fairfield.k12.in.us or acunningham@jpr1source.com.