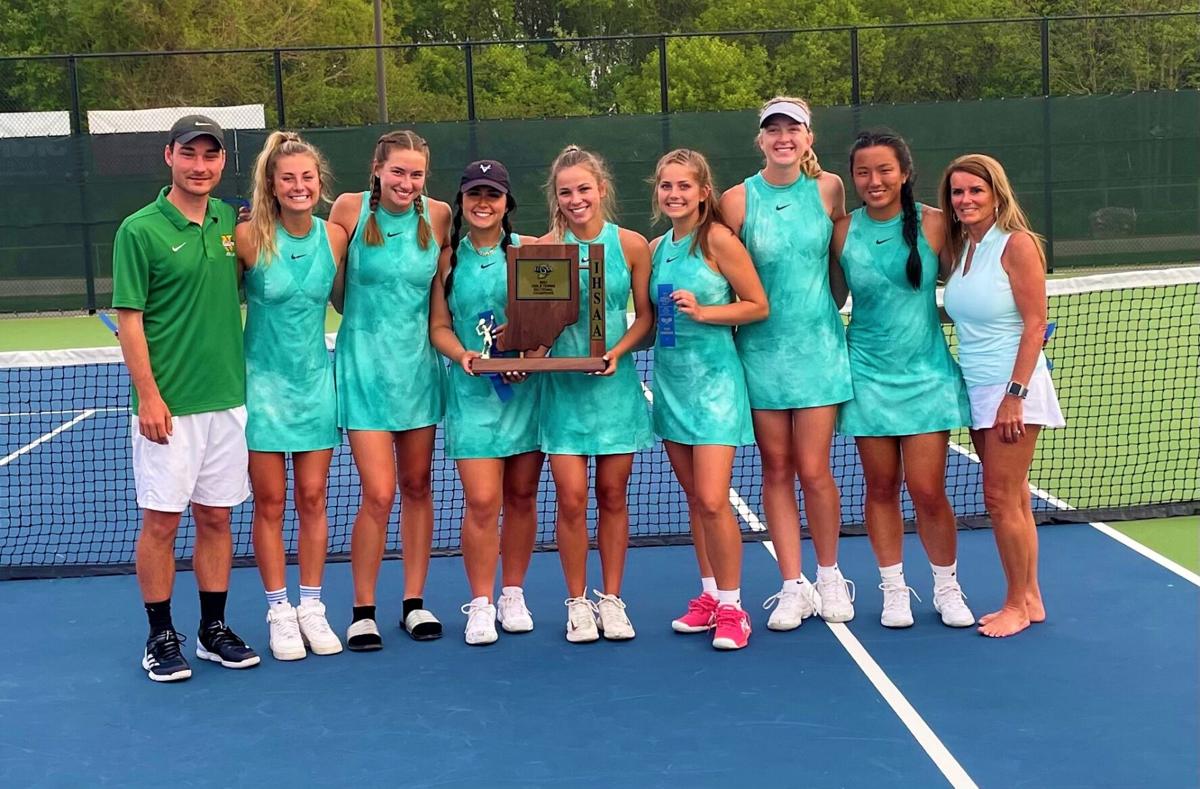 The Northridge girls tennis team poses for a photo after winning the Sectional 47 final over Elkhart at Northridge High School to advance to regionals. 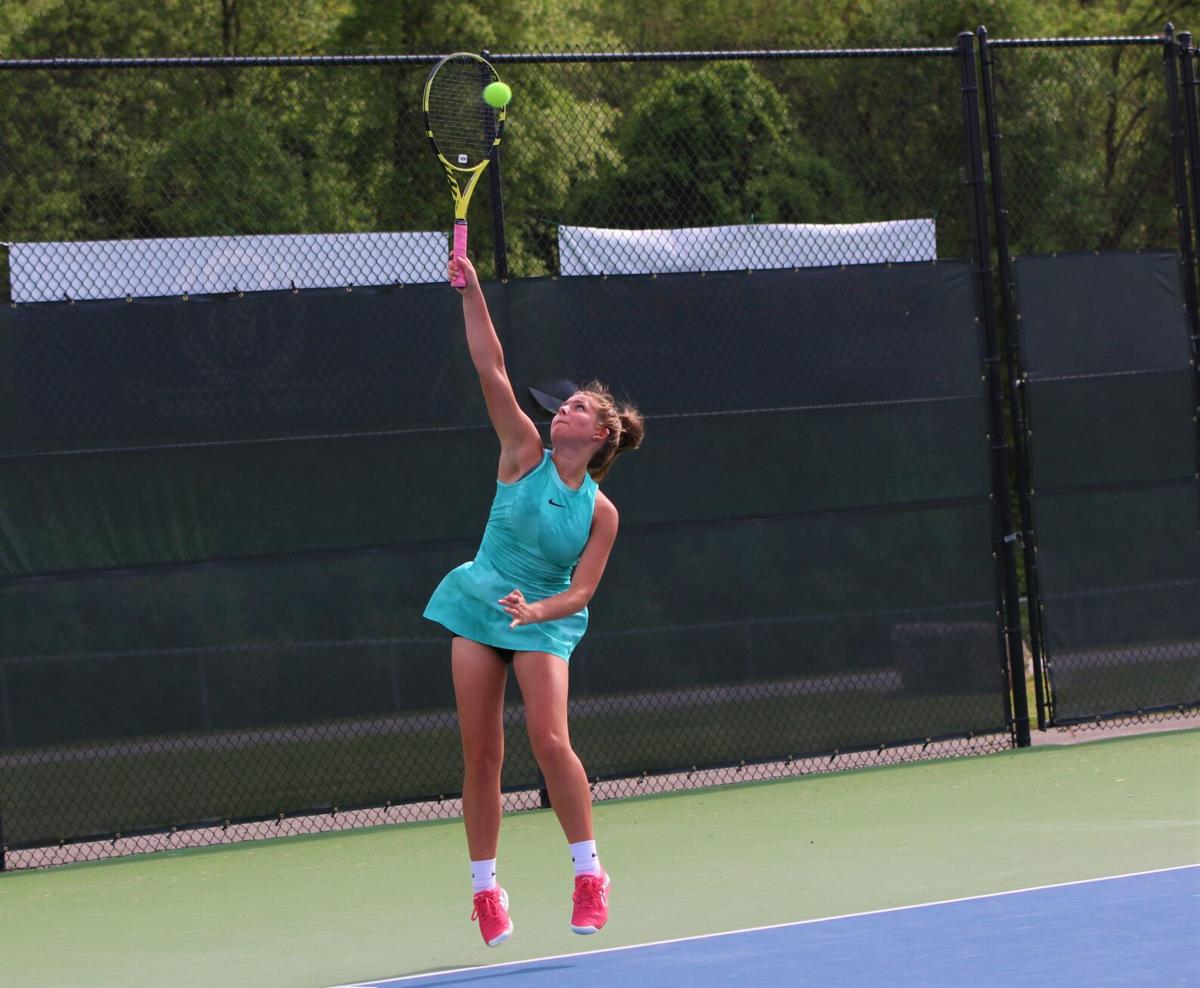 Northridge No. 1 singles player Riley Wheatley serves during her match against Elkhart’s Adley Keim at Thursday’s Sectional 47 final in Middlebury. 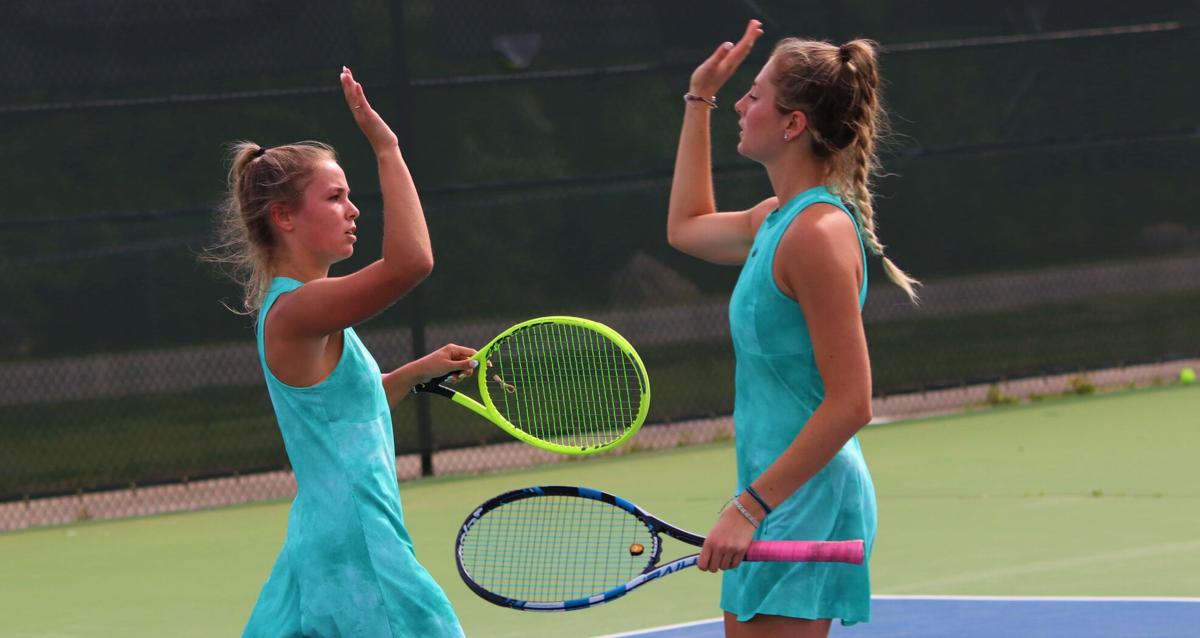 Northridge No. 1 doubles tandem Brynne Gayler, left, and Peyton Kieper celebrate after earning a point during Thursday’s Sectional 47 final against Elkhart in Middlebury. 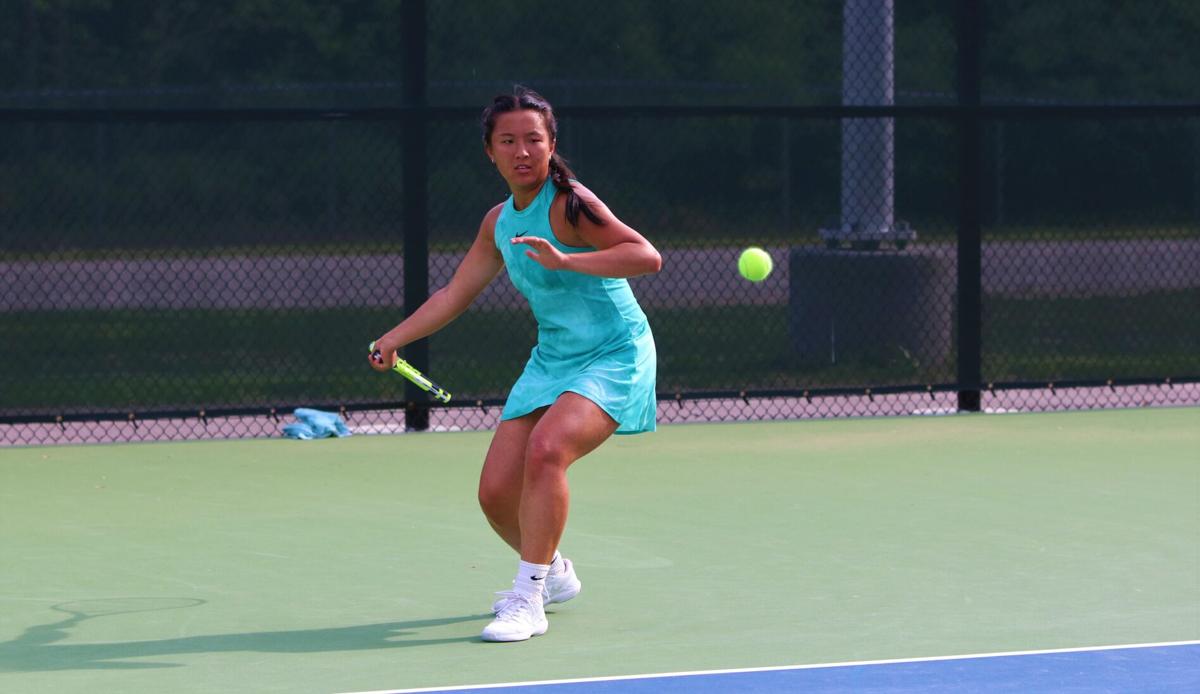 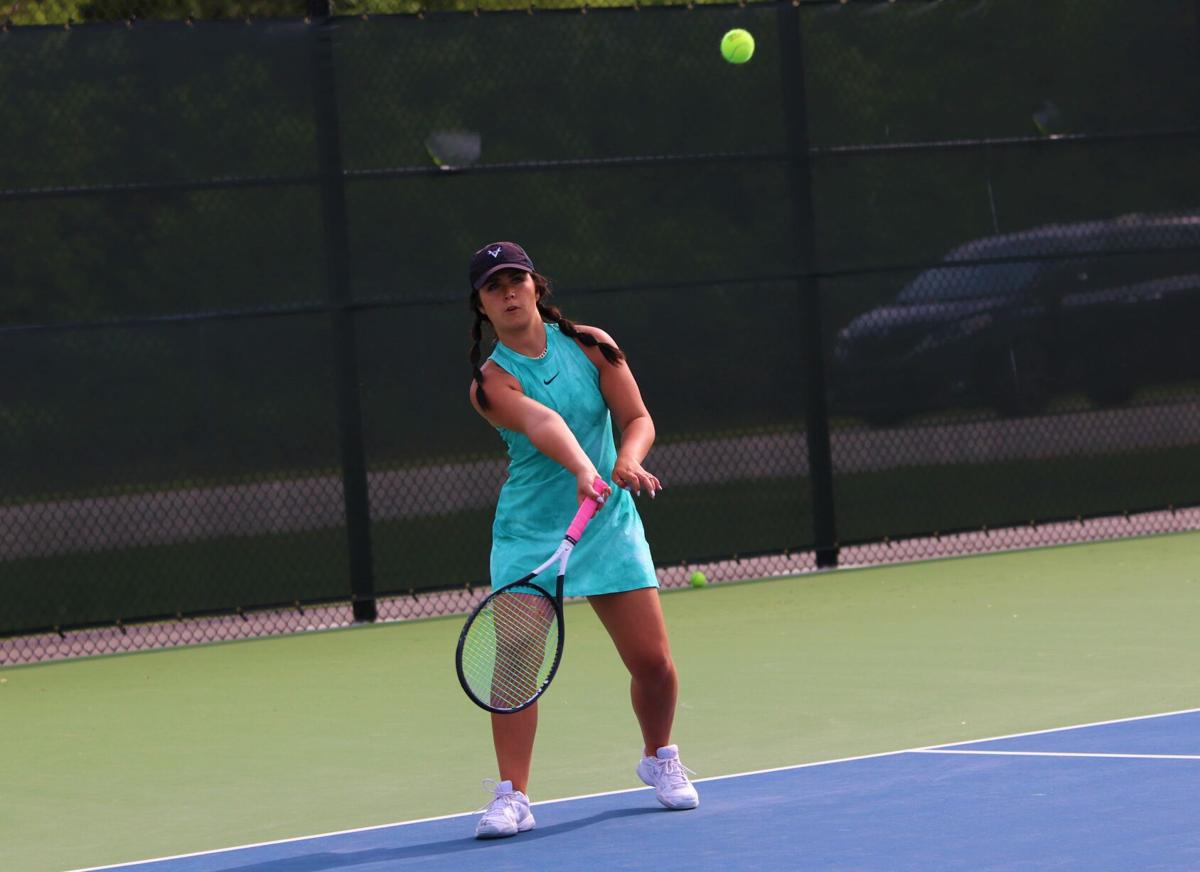 Northridge No. 2 doubles player Taylin Cress plays during the first set of her match with teammate Morgan Mack at Thursday's Sectional 47 final against Elkhart in Middlebury. 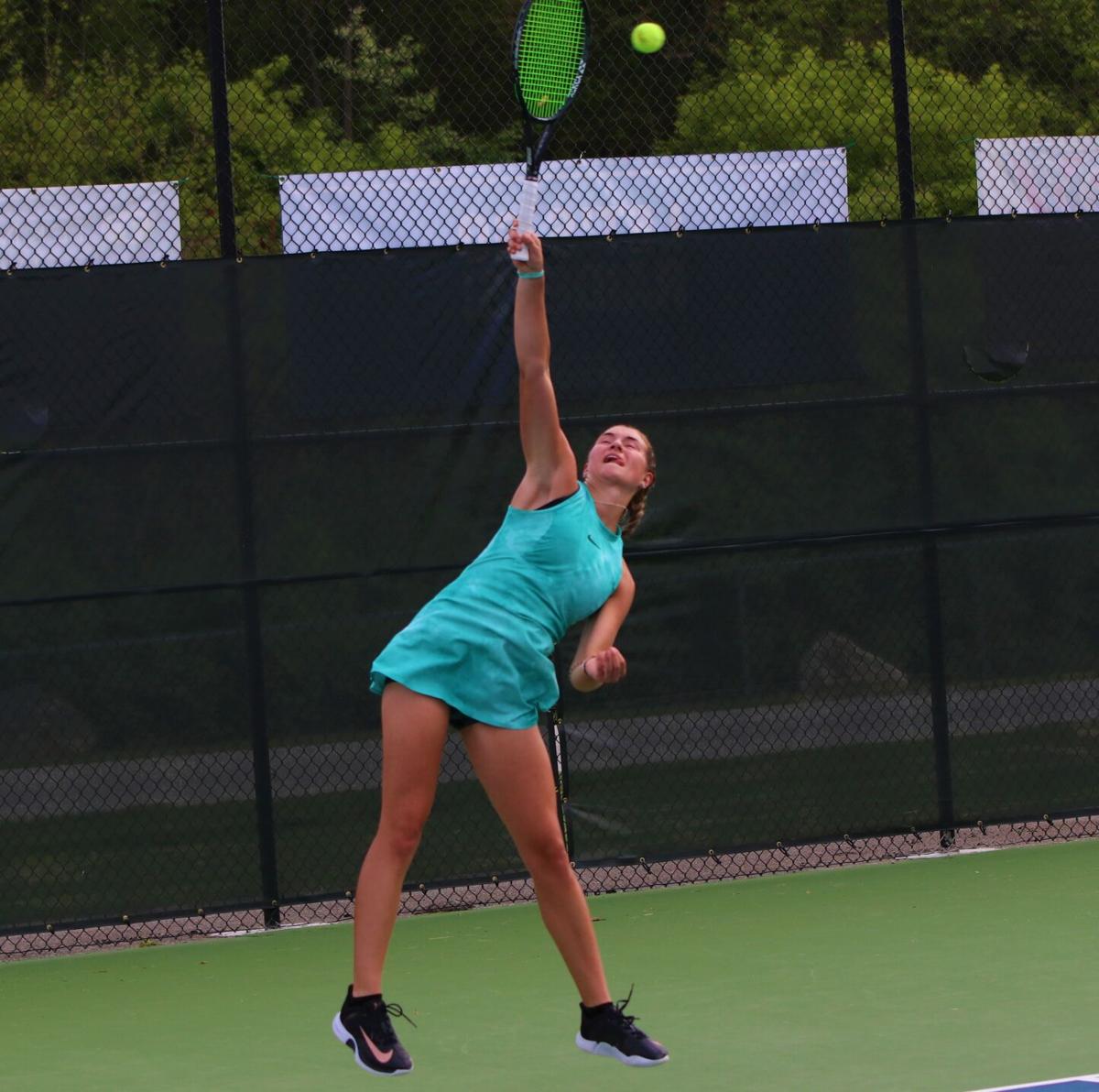 The Northridge girls tennis team poses for a photo after winning the Sectional 47 final over Elkhart at Northridge High School to advance to regionals.

Northridge No. 1 singles player Riley Wheatley serves during her match against Elkhart’s Adley Keim at Thursday’s Sectional 47 final in Middlebury.

Northridge No. 1 doubles tandem Brynne Gayler, left, and Peyton Kieper celebrate after earning a point during Thursday’s Sectional 47 final against Elkhart in Middlebury.

Northridge No. 2 doubles player Taylin Cress plays during the first set of her match with teammate Morgan Mack at Thursday's Sectional 47 final against Elkhart in Middlebury.

MIDDLEBURY — The Northridge girls tennis team accomplished something it hadn’t achieved since 2013 on Thursday night: bring home a sectional championship.

The Raiders — under the guidance of first-year coach Austin Christner — took down Elkhart 4-1 to advance to play Angola in the regional semifinals on Tuesday at Northridge High School.

“All their work, from last year going into this year, was for this moment,” Christner said. “Think about how hard it is to train for something that’s a year and-a-half away. That’s what these girls were doing, and now it’s fun for me to see these girls reap the benefit of all that hard work. I thought (Thursday), we came out so focused and concentrated on our goal. On every court, I was happy with how we came out. (Wednesday), I thought we came out a little flat, but we were definitely ready for the finals.”

Similar to the sectional semifinals the night before against Concord, No. 1 singles, No. 2 singles and No. 1 doubles all looked superior against a solid, well-balanced Elkhart team.

No. 1 singles player Riley Wheatley was consistent and jumped on Elkhart’s Adley Keim from the start of the first set. The senior won her first three games quickly to dart ahead to a 3-0 lead. She’d ride that momentum to a 6-0 win in that first set. Keim fought to make the second set more difficult for Wheatley, but she’d overcome that to win the second set 6-2.

In No. 2 singles play, Lilah Dean was dominant once again for the Raiders. Dean swept the first match 6-0 and was tied 1-1 with Elkhart’s Jillian Hayward during the second. Unfortunately for Hayward, the high temperatures on Thursday affected her play, and she was forced to stop after dealing with lightheadedness. That’d give the Raiders their first match win of the night.

No. 1 doubles players Brynne Gayler and Peyton Kieper looked the part once again on Thursday night against Elkhart’s Jessica Dibley and Callan Kubiak. The Northridge tandem got off to a quick 4-1 start in the first set and finished in control to win 6-1. The second set was more of the same, despite Elkhart seeing a little more success. The Raiders would win that one as well, 6-2.

“People say tennis is an individual sport, but I differ,” Christner said. “I think it’s a team sport, and one match can affect another match. I think what you saw down the row was our No. 1 singles came in really focused. Riley’s one of our leaders and came in with a quick start. No. 1 doubles, again, quick start. Two seniors, two leaders that came out quick as well. That just trickled down all the way.”

Taylin Cress and Morgan Mack from Northridge did a great job of finishing sets against Elkhart during No. 2 doubles play. Cress and Mack were in tight back-and-forth affairs early on during both sets, but managed to distance themselves as the match went on. It was 3-2 during the first set until Cress and Mack won three games in a row to beat Elkhart’s Raelee Pelletier and Callan Kubiak 6-2. The second set was 2-1 at one point, but the Raiders would win four of five games to come out on top 6-2 again to win.

The last match to finish was an intense battle between Northridge’s Maia Schmucker and Elkhart’s Elise Walker. Walker took the first set 6-4 and was up 3-0 during the second when Schmucker came roaring back. The senior took a 5-4 lead and eventually held on to force a third set, 7-5. Walker would win the decisive third set, 6-2, but the fight Schmucker displayed was commendable.

“I was happy to see Maia, during that second set, stay aggressive,” Christner said. “I think that was the difference in that second set. She was still pushing and being offensive with her shots, and I think during the third set she went back to being a little more defensive. Every time you lose, you learn, and I think this is an opportunity for her to learn and take that into regionals and hopefully beyond that as well.”

The Raiders haven’t faced Angola — one of the better teams in the Northeast Corner Conference — but Christner realizes that, at this point, anybody you play will be a tough team to beat.

“Once you get past sectionals, every night’s a tough match,” he said. “I feel confident in our girls, and the way we played (Thursday) I think we’ve got a good chance. … Hosting is definitely an advantage for us, and we’re excited to hopefully get through Angola and get to the final.”