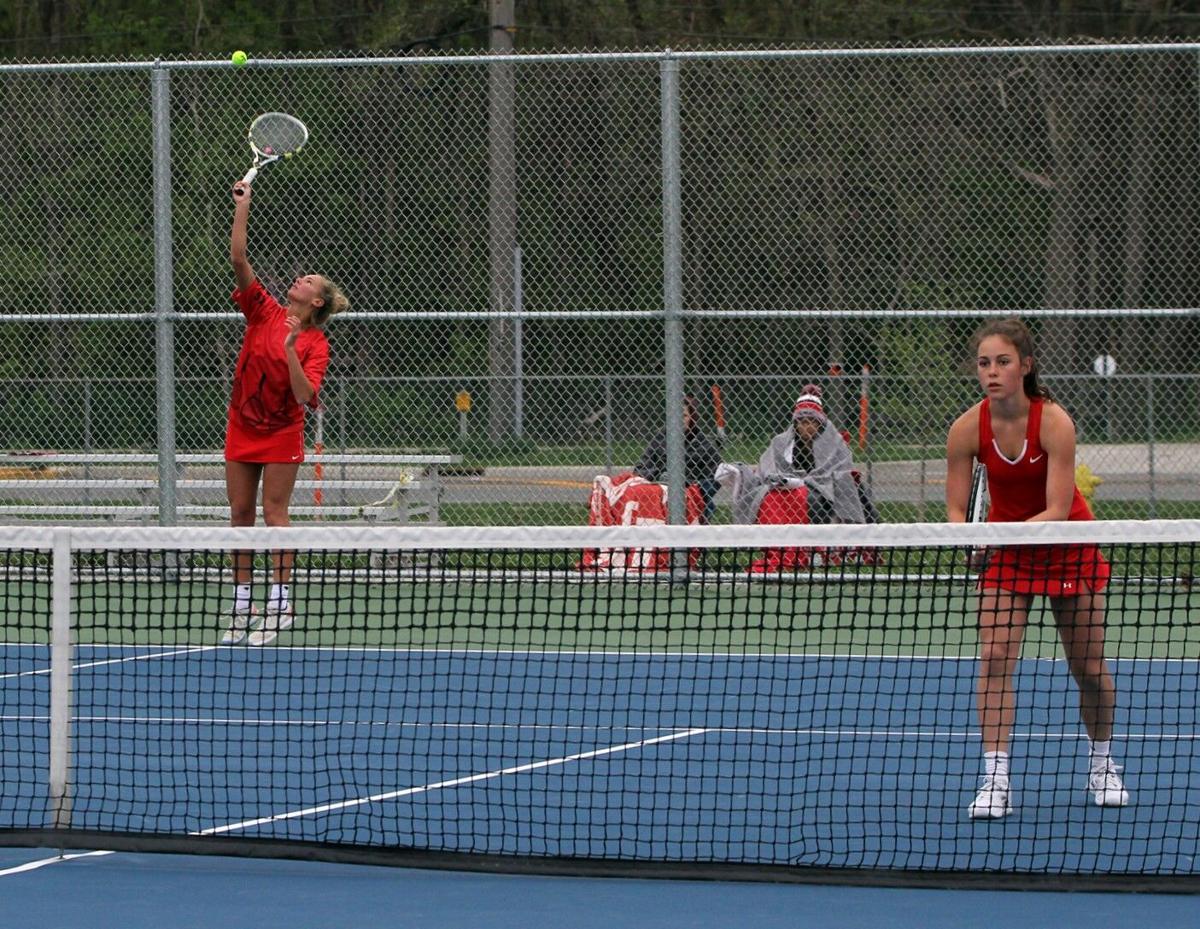 Goshen senior Kathryn Detweiler, left, serves the ball while her No. 1 doubles teammate, senior Joya Drenth, looks on during their match against Plymouth on May 4 at Goshen Middle School in Goshen. Detweiler and Drenth will play in the individual doubles state tournament quarterfinals Friday at 3:30 p.m. at North Central High School in Indianapolis. 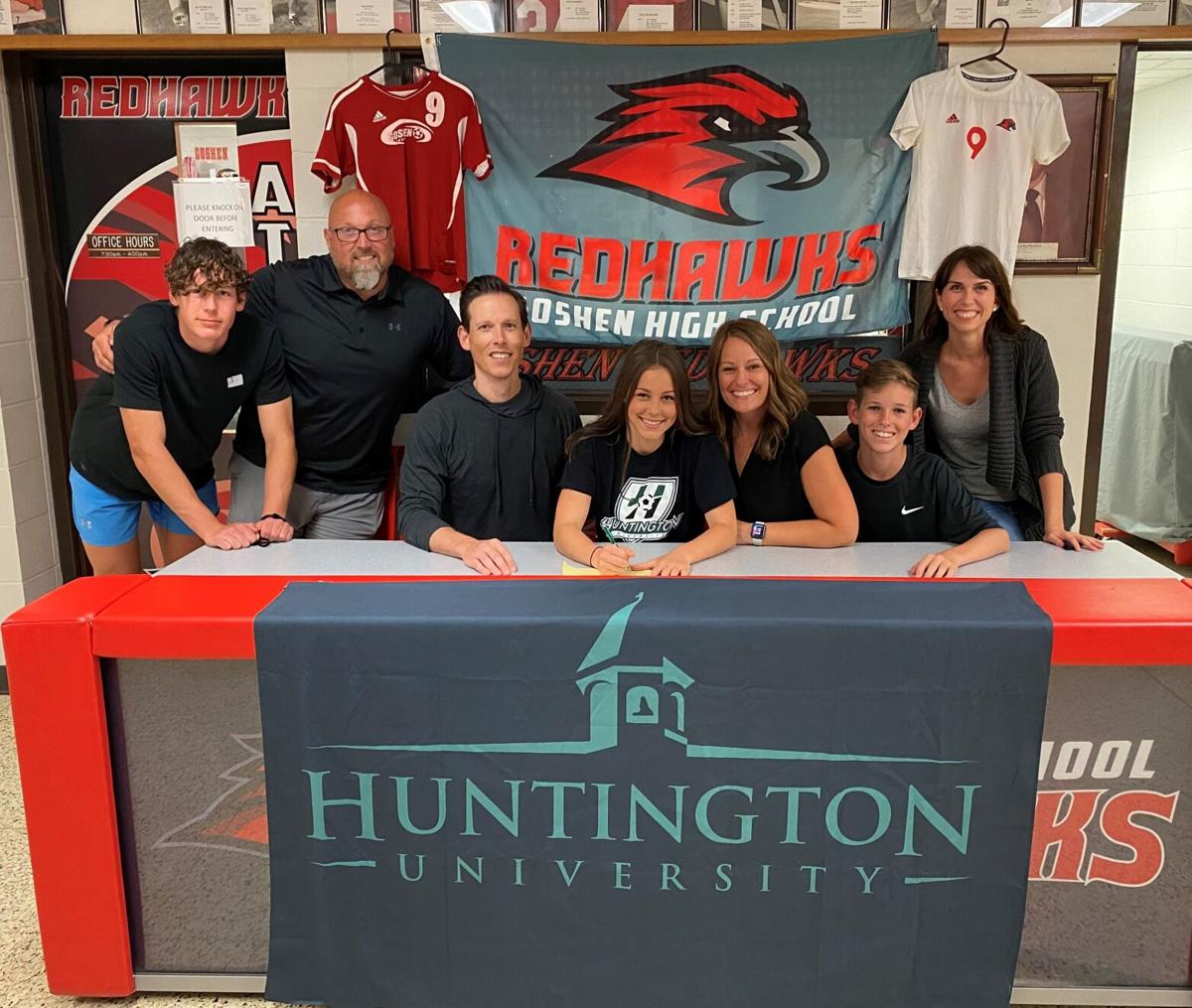 Goshen senior Kathryn Detweiler, left, serves the ball while her No. 1 doubles teammate, senior Joya Drenth, looks on during their match against Plymouth on May 4 at Goshen Middle School in Goshen. Detweiler and Drenth will play in the individual doubles state tournament quarterfinals Friday at 3:30 p.m. at North Central High School in Indianapolis.

GOSHEN — For the second time under coach Daniel Love, a Goshen doubles team will be playing in the individual state tournament.

Seniors Kathryn Detweiler and Joya Drenth will be competing in the individual state tournament this weekend after beating the Bremen duo of Courtney Lawmaker and Grace Meyer in the individual regional championship this past Saturday at LaPorte High School. The first time this happened under Love was in the fall of 2015 when Luke Rush and Logan Troyer advanced all the way to the individual state semifinals.

Detweiler and Drenth (20-2) will get to face the Carmel tandem of sophomore Alexa Lewis and junior Hallie Reeves (26-1) in the quarterfinals at 3:30 p.m. Friday at North Central High School in Indianapolis. Lewis and Reeves just won the team state championship for the Greyhounds last weekend and went 8-0 in the postseason, earning themselves the top overall seed in the individual tournament.

Coming into this season, Goshen had three seniors on the roster: Detweiler, Drenth and Lucy Kramer. In the last completed season of 2019, Detweiler was a doubles player, Kramer the No. 1 singles player on varsity and Drenth the No. 1 singles player on JV. With three equally talented players at the top, Love knew he had a difficult decision to make on what the lineup would look like.

He knew one option wasn’t on the table, though.

“I knew (Detweiler) would put me on her death list if I asked her to play singles,” Love joked.

Given Kramer’s spot as the top singles player two seasons prior, Love thought about approaching Drenth on moving to a doubles spot with Detweiler. Luckily for the coach, Detweiler had already made the pairing for him.

“(Detweiler) said ‘Joya, you don’t have an option. You’re going to be my doubles partner,’” Drenth said.

Despite never playing together on the court before this year, Drenth and Detweiler showed instant chemistry. They quickly became one of the top doubles teams in the Northern Lakes Conference, posting a 14-1 regular season record.

“I definitely knew going in that we were one of the stronger teams in the NLC — obviously, that showed in our record and showed in our playing,” Detweiler said. “We had some rocky games early in the season where it was figuring out our strengths and our weaknesses.”

Although Detweiler and Drenth would go on to win their final two matches of the tournament, that loss stung. It then served as motivation for the run they’ve been on since.

“That kind of cost us our placing in the NLC,” Detweiler said. “It was like, ‘Alright, we need to literally dial in and focus on the end of the season because we had sectionals left.”

After the NLC tournament, Detweiler and Drenth won their team sectional match against Fairfield, 6-0, 6-0. While the RedHawks team didn’t advance, the two seniors moved on to the individual sectionals tournament since they were winners at the No. 1 doubles position.

In the individual sectional championship match, Detweiler and Drenth drew a rematch with Porter and Adams. This time around, the Goshen duo left no doubt, winning 6-3, 6-1 to capture the individual title.

Then, last week, the RedHawk tandem was able to win the regional championship, beating Lawmaker and Meyer, 6-1, 6-1, to advance to this weekend’s state quarterfinals.

Drenth credited the NorthWood loss in the NLC tournament for the recent success of her and Detweiler.

“I’m kind of thankful for that match because it kind of motivated us to get such a good win in the sectionals,” Drenth said. “I think that match was super important to our improvement and how we’ve done in the tournament.”

Given the Goshen team was eliminated from the postseason back on May 19, Drenth and Detweiler have been able to have practices tailored the way they want to for nearly three weeks. Both players raved about how beneficial the one-on-one time with coaches has improved their games.

“It’s been absolutely amazing,” Drenth said. “I’ve probably made more improvement in these last two weeks than I have in the whole season.”

“If we do a drill and it goes rough for us, we can go, ‘Hey, can we do that again? Can we spend more time on it and get confident in our skills in that?’ … It’s definitely felt nice in making us more confident in our game,” Detweiler added.

Detweiler and Drenth now get to prepare for the team of Lewis and Reeves, one of the top doubles teams in the state. One advantage Goshen may have on the Greyhounds duo is the fact that Lewis and Reeves’ state title match was streamed online by the IHSAA, meaning they’ll be able to watch film of their opponents for Friday — a rarity in the high school tennis world.

“I love it,” Love said. “I want as much data as I can get, and now I can see it. I don’t just have to look at stats or how they’ve done against different opponents; I can just watch them, which is way better.”

Just having a chance to play a team like Carmel is a rewarding experience, in Drenth’s mind.

“I hate to say it, but state wasn’t on my radar whatsoever or even regionals,” Drenth admitted. “I just wasn’t expecting this to even be a thing. We had to actually re-schedule our graduation open houses because we weren’t expecting this. It’s just been super awesome to play some competitive matches and show that we can win.”

While this weekend marks the end of their high school careers, it’s not the complete end of either’s athletic careers. Detweiler is moving on to play volleyball at Cornerstone University in Michigan, while Drenth signed her letter of intent to continue her soccer career at Huntington University on Monday.

In Detweiler’s eyes, being able to end their senior years with a trip to the state tournament has proven to be validation for the hard work put in all four years of high school.

“It feels very solidifying in our abilities and what we’ve put in throughout the past four years,” Detweiler said. “I’ve been in the individual sectional every year that I’ve played tennis for Goshen, and we’re finally putting all the skills together, finally got out of the sectional and we’re making a run to state. This has been a long time coming, and it just feels really good to be able to see it come together.”