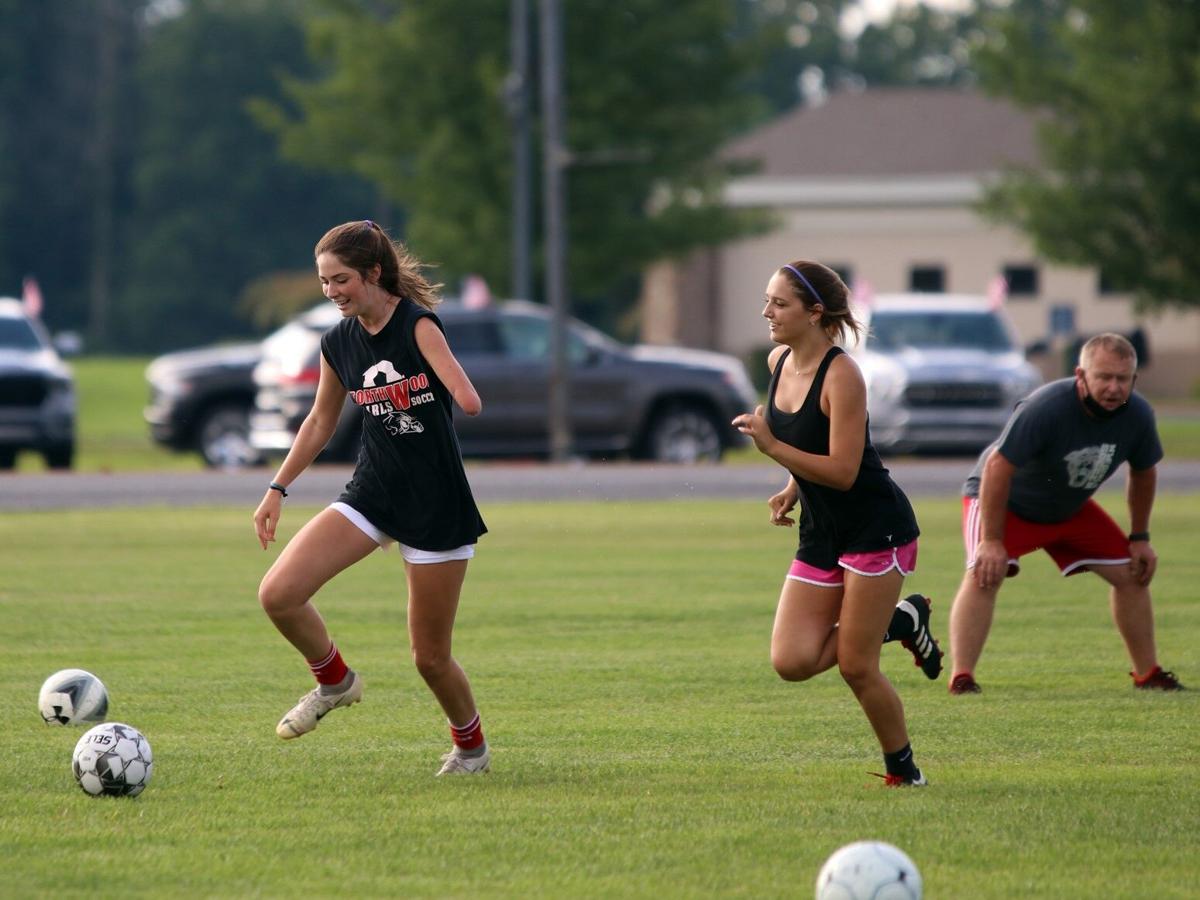 NorthWood junior Lizzie Hilderbrant, left, runs past teammate Emma Graberson during a drill in practice Thursday. Hilderbrant was born without everything below the elbow on her left arm, but it hasn’t stopped her from playing soccer. In the background is NorthWood girls soccer coach Tom Shields. 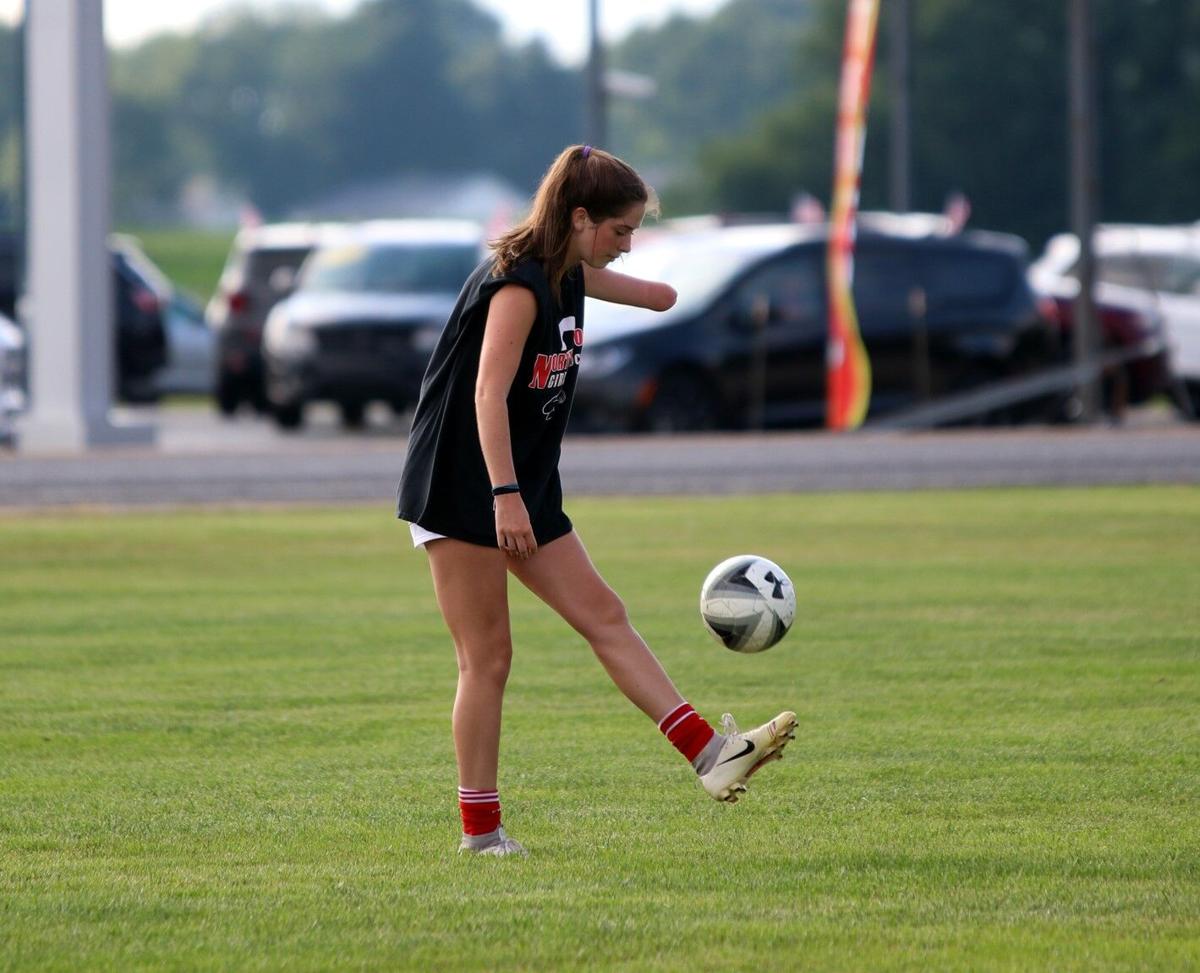 NorthWood junior Lizzie Hilderbrant plays around with a soccer ball in between drills at a practice Thursday.

NorthWood junior Lizzie Hilderbrant, left, runs past teammate Emma Graberson during a drill in practice Thursday. Hilderbrant was born without everything below the elbow on her left arm, but it hasn’t stopped her from playing soccer. In the background is NorthWood girls soccer coach Tom Shields.

NorthWood junior Lizzie Hilderbrant plays around with a soccer ball in between drills at a practice Thursday.

NAPPANEE — Lizzie Hilderbrant hadn’t done a throw-in for six years when her coach asked her to do one in a sectional playoff game last year. She looked at her coach, Tom Shields, almost dumbfounded that he would request she do it, but Shields insisted she throw the ball back in.

Having a soccer player do a throw-in isn’t out of the ordinary. For Hilderbrant, though, it’s something she doesn’t do because of the way she was born.

The NorthWood junior doesn’t have any of her left arm from the elbow-down. Doctors didn’t even notice the defect until after she was born, which is rare.

“My parents had no idea when I was born, too,” Hilderbrant said. “Usually you can tell, but I guess it came out as a surprise to them. They had no idea. I was just born like that.”

Born and raised in Nappanee, Hilderbrant has faced minimal issues with her condition. While people will ask all the time about her left arm, she says her friends and the community have let her be like any other person.

“It was nice to have a community that didn’t view me as disabled,” Hilderbrant said. “Some people that didn’t know me would suggest I couldn’t do something, and it would be nice if I could do it and show them that I can basically do whatever I can; like prove them wrong.”

Living with one hand has also never felt like a challenge, in her eyes, because that’s the way she’s always been.

“I didn’t really see them as challenges because I’ve been doing it my entire life,” Hilderbrant said. “It wasn’t very hard for me. I don’t really remember any things happening that I couldn’t do when I was little.”

Having only one hand hasn’t stopped Hilderbrant from achieving whatever she sets out to do. She’s played sports all her life, primarily soccer. She used to play basketball, but has focused all her attention to soccer as she has gotten older.

“I just stuck with soccer,” Hilderbrant said. “It was the best for me because I never really had any problems with it.”

Shields has had prior experience coaching a player with only one hand. While coaching in one of the club programs near Nappanee, Shields coached 2016 NorthWood graduate Sarah Stump, who also doesn’t have a left hand. Shields said the experience of coaching Stump has helped with coaching Hilderbrant.

“I try to utilize them as much as we can like everyone else,” Shields said. “We don’t try to make them feel different.”

That’s what led Shields to wanting Hilderbrant to throw the ball in during the team’s sectional contest against West Noble. The last time Hilderbrant attempted a throw-in — all the way back in fifth grade — didn’t go over well.

“I played for a travel team, the PUMAS — it’s a Nappanee travel team — and I threw-in one time and the refs told me I couldn’t do it because I couldn’t hold the ball correctly,” Hildebrant said. “So, I never threw-in anymore.”

Shields remembered having issues with Stump being allowed to throw in when he coached her, so he made sure to run the situation by the refs before he asked Hilderbrant to do throw-ins.

“I was able to get refs on my side to allow her to do so,” Shields said.

Her throw-in abilities were apparent from the first toss. Hilderbrant tucks the ball behind her head and throws it, almost shotput style, back into play.

“I just chuck the ball,” Hilderbrant said. “I think that’s why the refs used to not like it because I kind of chuck the ball. They didn’t care during sectionals — I did it all throughout the sectional game.”

“As a person, she is determined to prove herself, to look good, to play well and to not look different,” Shields said. “She’s a real special girl because of such.”

Hilderbrant now prepares for her third varsity season with NorthWood. While there have been restrictions with what the Panthers can do as a team, Hilderbrant has been able to play club soccer most of the summer, allowing her to get some scrimmage time in with other players.

Whether a 2020 high school season will happen is still up in the air, though.

“I feel conflicted if (the season) is going to happen or not because I feel like we’re going backwards right now, and a lot of schools can’t have spectators at their games anymore,” Hilderbrant said. “I just don’t know what to expect.”