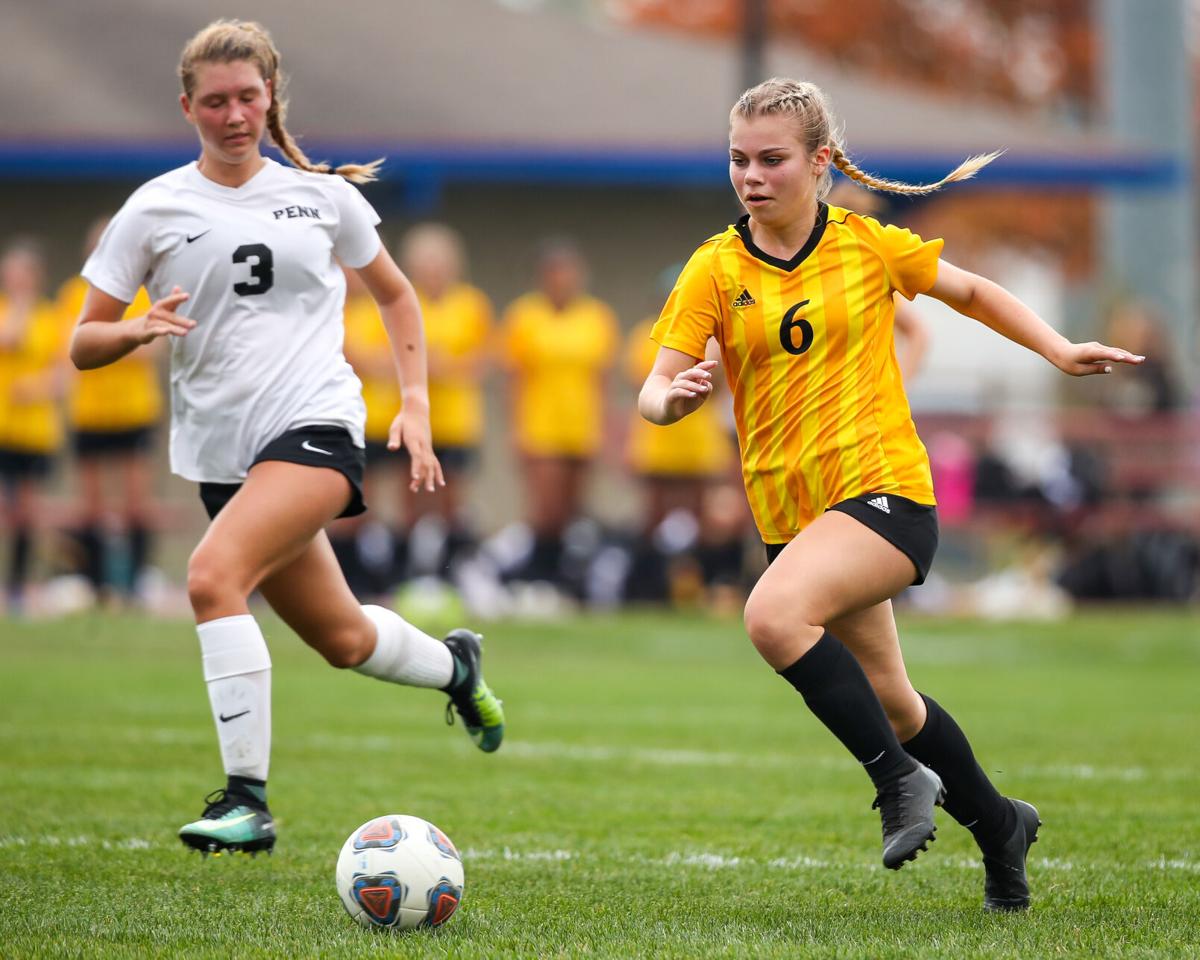 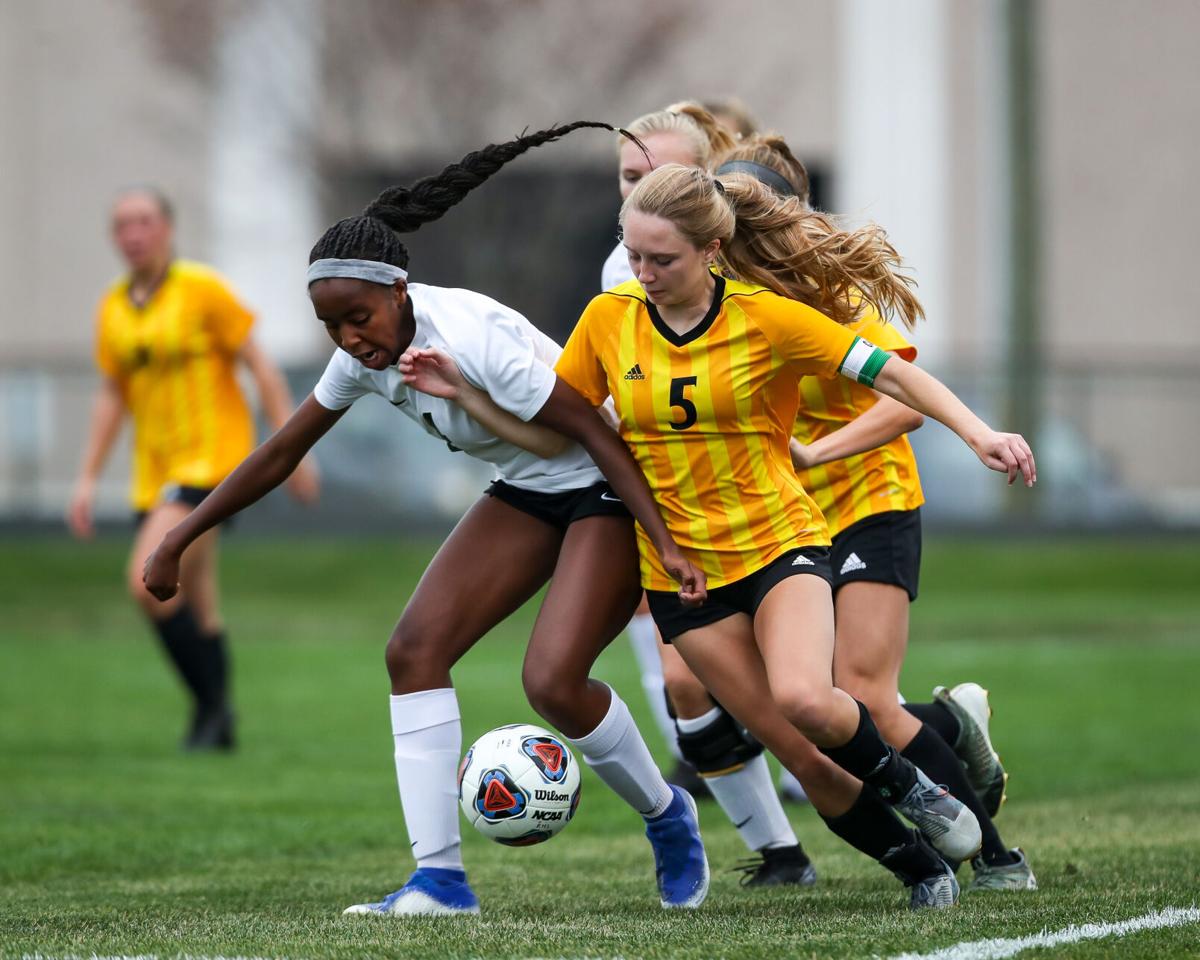 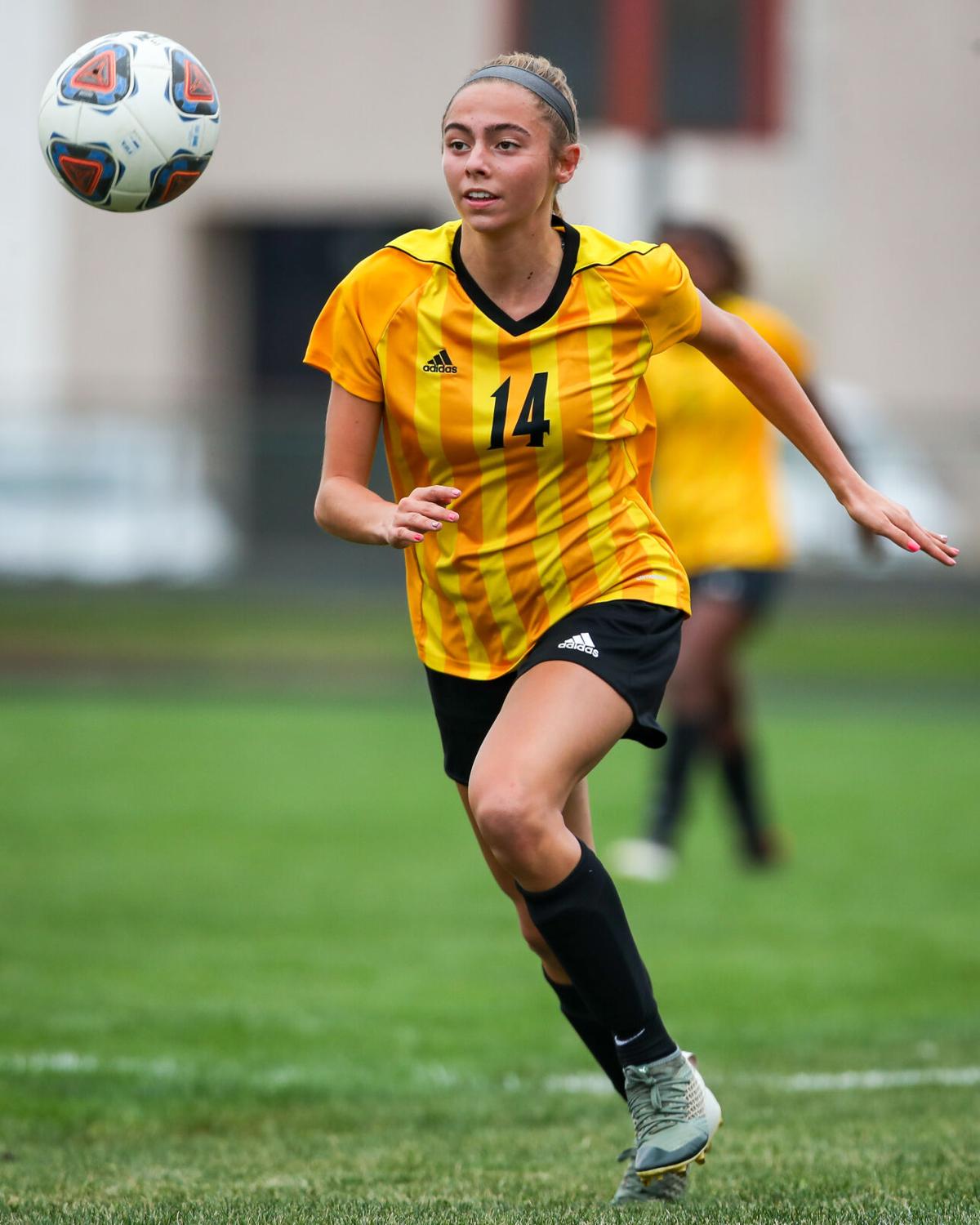 Northridge junior Olivia Adkins with her eye on the ball during the IHSAA Sectional Championship game vs Penn in Elkhart Saturday. 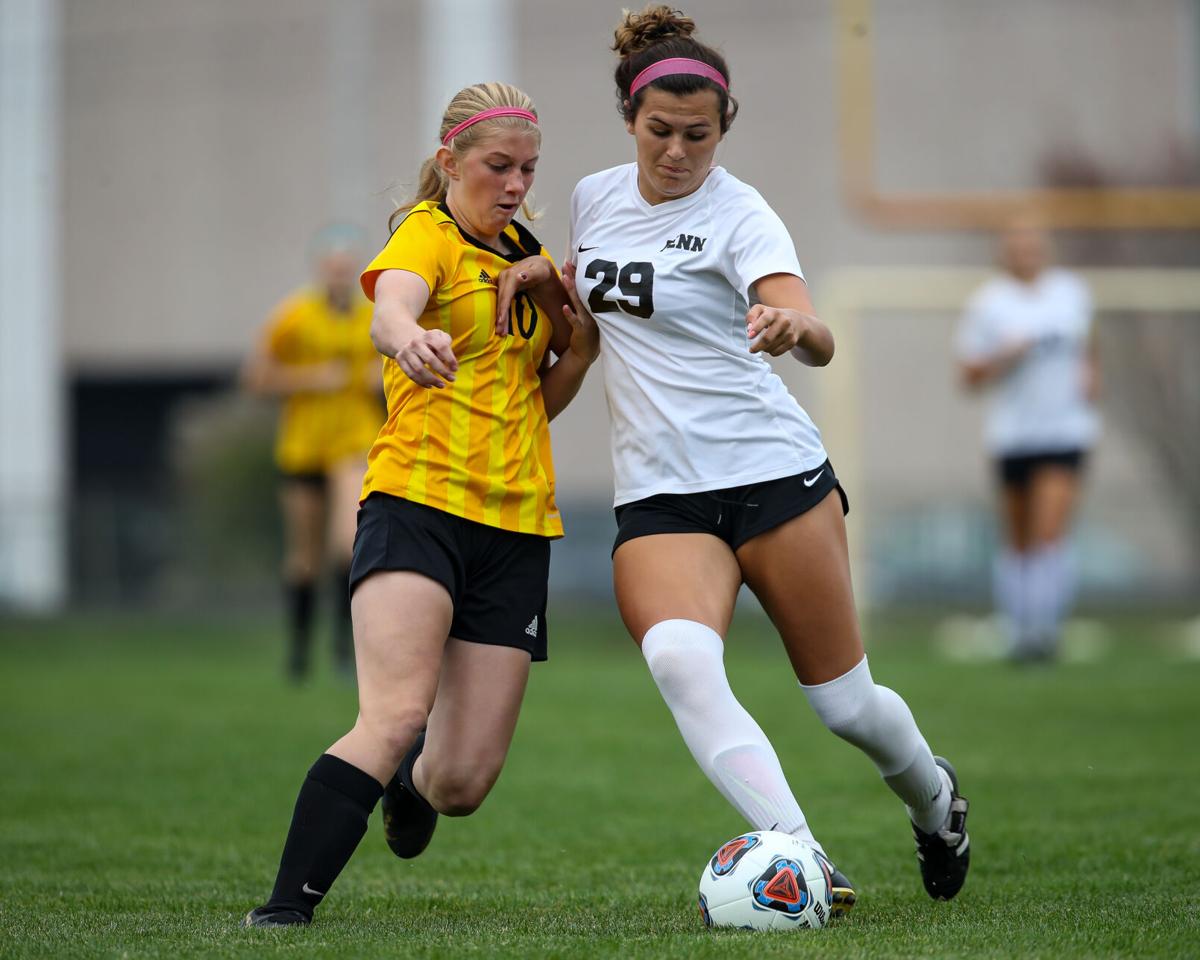 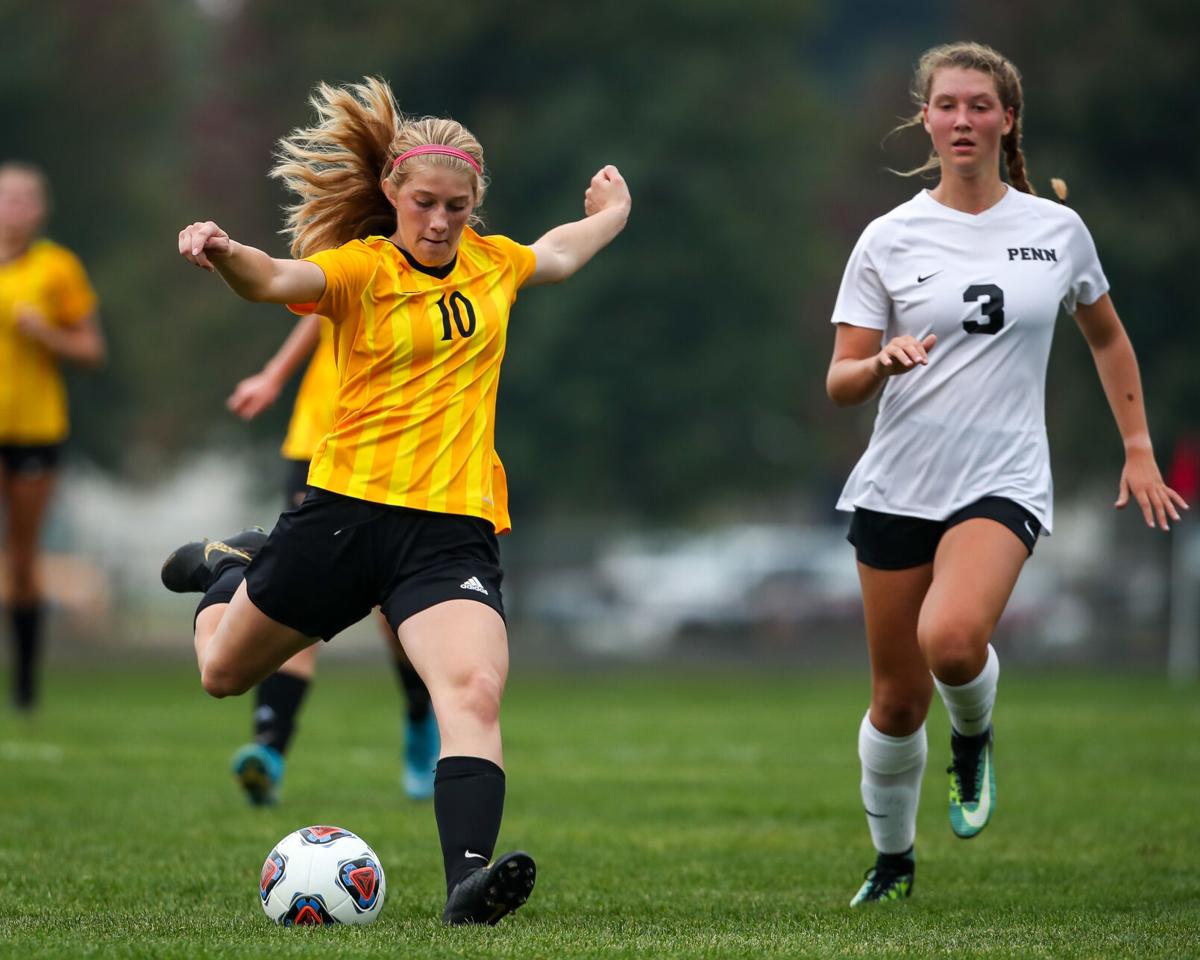 Northridge junior Olivia Adkins with her eye on the ball during the IHSAA Sectional Championship game vs Penn in Elkhart Saturday.

ELKHART — Northridge made the adjustments to pull even with Penn late in championship match of the IHSAA Class 3A Elkhart Sectional girls soccer tournament Saturday at Elkhart West, only to see the Kingsmen (9-8-1) claim their 19th overall and 14th straight sectional title (the longest active title streak in the state) with a penalty kick.

Senior Hannah Roberson scored on a breakaway through ball pass from senior Sydney Domal in the 5th minute to put Penn up 1-0. Robertson was moved to striker three weeks ago to take advantage of her size and speed. She is bound for Indiana University Purdue University Indianapolis as a defender.

Senior Maddy Wienert came out of a scramble near the net in the 72nd minute with a game-tying goal for the Raiders.

With jostling going on in the box, there was a hand ball call and junior Elizabeth Hague took the penalty kick that put the Kingsmen ahead 2-1 in the 77th minute.

Northridge senior Alex Sheets, the starting goalkeeper, was hurt on the play where the penalty was called and was spelled for the PK by freshman Cydel Miller.

Penn’s 2-1 win against the Raiders earned them a spot opposite South Bend St. Joseph in the 10 a.m. match in the South Bend Adams Regional on Saturday, Oct. 17 at Tallman-Beyer Field on Eddy Street. The second semifinal will feature Chesterton vs. Crown Point. The championship is slated for 7 p.m.

The Kingsmen put 15 shots on goal and produced six corner kicks to one shot and no corners for Northridge (9-7-1).

“The first half, we came in with something we thought would work,” said Raiders coach Chris Malott of his team’s strategy. “It opened up the middle a little too much. In the second half, we switched to something that could help clog up the middle and get us a little more man-marked. It created more (offensive) chances and kept them out of our end more.

Sheets made 13 saves — seven in the first half.

“She kept us in that game,” said Malott of Sheets. “She’s got nothing to hang her head about.”

The Raiders had many runs that just didn’t result in scoring chances.

“That’s kind of been our M.O. this year,” Malott said. “We do really well possessing and moving the ball. Then we seem to get to the final third to finish. We just can’t eek out that final one or two passes to give us an opportunity.

“We got in some good positions, we just couldn’t get the trigger pulled to get some shots on goal.”

The Raiders started the match with a four-back formation. When they made the goal, they changed to a three-back set to get numbers forward.

“When you get opportunities like we had all day like we did against Northridge, you have to put some of those away,” Hart said. “Northridge is never going to give up and when they get a chance to score they’re going to, and that’s exactly what happened.

“Fortunately, our kids kept their composure and continue to keep putting pressure on them. Their goalie came up big two or three times and really kept them in it. You could see (Northridge) gaining confidence as the game went on.”