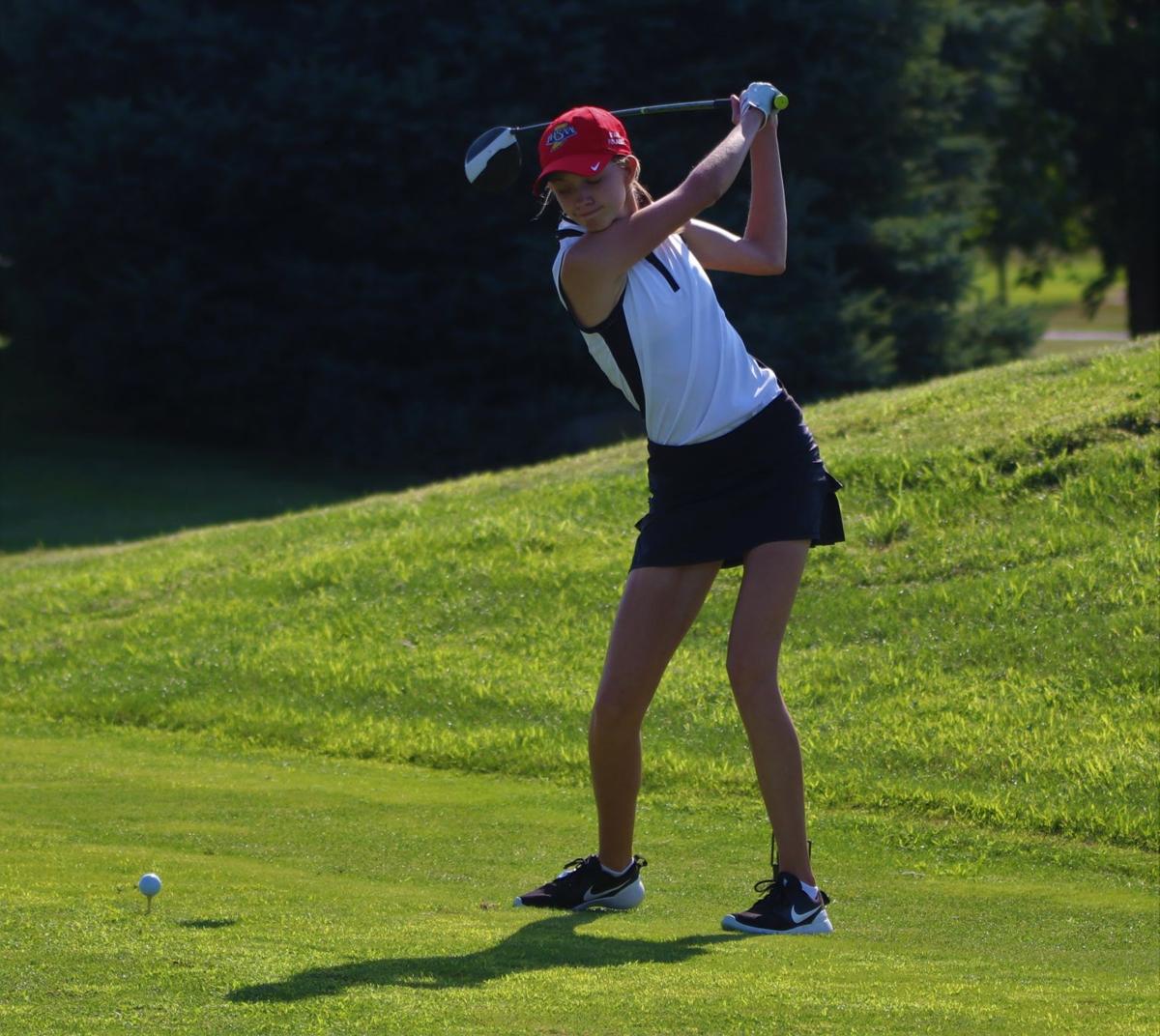 NorthWood’s Cybil Stillson drives the ball on the 10th hole at the NorthWood Invitational Thursday at McCormick Creek Golf Course in this August 8, 2019 file photo. The Panthers won the invite with a team score of 305. 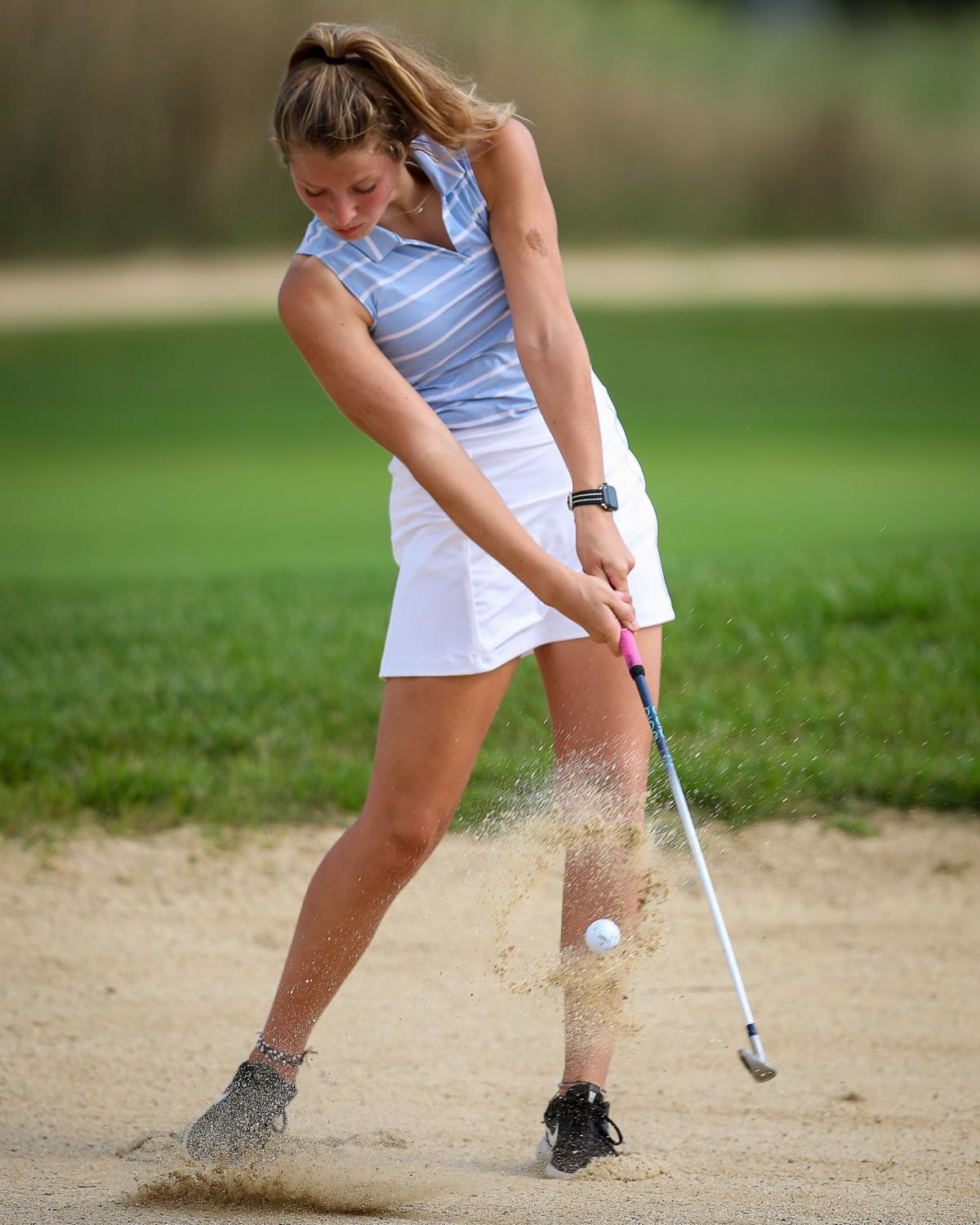 Tate Cowan of Wawasee hits a shot out of the bunker during the IHSAA girls golf sectional at Stonehenge Golf Club in this Sept. 22, 2019 file photo in Winona Lake.

NorthWood’s Cybil Stillson drives the ball on the 10th hole at the NorthWood Invitational Thursday at McCormick Creek Golf Course in this August 8, 2019 file photo. The Panthers won the invite with a team score of 305.

Tate Cowan of Wawasee hits a shot out of the bunker during the IHSAA girls golf sectional at Stonehenge Golf Club in this Sept. 22, 2019 file photo in Winona Lake.

NAPPANEE — NorthWood will once again headline the local girls golf scene in 2020, as the Panthers return their top two players from a team that finished sixth at the IHSAA state meet in 2019.

Juniors Cybil Stillson and Breanna Goss will anchor NorthWood as they look to achieve even higher success than last year. Stillson is the top returning individual from the area as well, as she placed sixth at the state finals a season ago.

Four seniors graduated from the 2019 team, however, leaving some holes to fill behind Stillson and Goss.

“The legacy of the 2019 seniors was their ability to balance fun vs. discipline,” said NorthWood coach Adam Yoder, who enters his 13th season leading the girls golf program. “They worked tirelessly on their games, but they also did so many things to keep it fun for everyone. That legacy is something that I know will carry on to our returning players.”

NorthWood has become one of the premier girls golf programs not only in the area, but in the state. They’ve qualified for 11 regionals in Yoder’s first 12 seasons, advancing to the state finals in four of those years. NorthWood is currently on a 57-match winning streak in Northern Lakes Conference nine-hole duals, with its last loss coming in 2011 to Elkhart Memorial. It has won either a share or the outright NLC title for eight-straight seasons.

“We're very proud of the culture we've developed in our program, and while it’s a new season and a new journey, we can lean on the past lessons that the 2019 seniors helped teach all of us,” Yoder said.

It’s been a long summer for everyone, as the coronavirus pandemic shut down in-person contact between players and coaches in April, May and June. Throughout July, teams have been able to hold organized workouts, but have been limited in how many hours they can spend together because of COVID-19 concerns.

All of this while golf has been one of the few sports to be played consistently since the pandemic began in mid-March. Yoder has enjoyed seeing the initiative his players have taken during the summer.

“Watching our girls improve and take it upon themselves to organize practices as a group this summer makes me even more excited for this season,” Yoder said. “There will be a lot more on our plates in terms of social distancing and new/changing requirements and rules, but all of that is well worth it if we can have a season.”

NorthWood loads up its schedule in the first couple of weeks, playing tournaments in Lafayette, Saint John (Lake Central Invitational) and at the State Preview invite in Carmel. With goals of making it a third-straight state finals appearance, Yoder knows the first couple weeks of the season will be crucial for his team.

“I, personally, am very excited about our group returning,” Yoder said. “As always, we will hit the road for the first two weeks and then re-evaluate where we are and what we need to do to accomplish our goals.”

The top non-NorthWood player returning to the area is Lakeland senior Madison Keil. As a junior last year, Keil qualified for the state championship meet as an individual. Lakeland as a team won the Northeast Corner Conference tournament a season ago, so they’re looking to repeat both the individual and team success they achieved in 2019.

The first official matches are Monday.

Numbers of years as head coach: 6

Coach's comments on the upcoming season: Several players are vying for varsity positions. The team is focused on making constant improvements, making a 5th straight regional appearance as a team and finishing with a strong NLC record.

Number of years as head coach: 3

Coach’s comments on the upcoming season: Goshen has nine returning players this season with three newcomers. The fight for varsity positions will be an endless competition between the top players because we have similar scores among them all! Coach Pecenka is hopeful for another season with improvements to individual scores and team scores overall. The team hopes to add a few more wins to their record this season!

Number of years as head coach: 4

Coach’s comments on the upcoming season: This group of seniors are the ones that started Lakeland girls golf their freshman year. We have had a fantastic few years; all seven girls gel perfectly together. Last season we won conference, along with Madison Keil going to state. I expect the girls to finish this season, their senior year, with lots of success and many personal bests. Kylee, Brooke and Amelia have grown so much in golf over the last year. I am excited to see how far they can go this season!

Number of years as head coach: 8

Coach’s comments on the upcoming season: Graduating four seniors who contributed for all four years to the success of the program will be difficult. I am excited to see the younger players begin to step up and mature as this season progresses. I know the team wants to continue the success and tradition the outgoing seniors have built.

Number of years as head coach: 13

Coach’s comments on the upcoming season: Our season expectations are two-fold as always: give ourselves a realistic chance to win the NLC title heading into the NLC tournament, and to qualify for the IHSAA East Noble Regional. We lost four of our top six players from last year to graduation. However, in addition to All-NLC juniors Cybil Stillson (6th 2019 IHSAA State Finals) and Breanna Goss (37th 2019 IHSAA State Finals) returning, we have senior Co-Captain Abigail Richner, who has varsity experience in her career and fired an 18-hole average of 91.7 last season in 6 events. Our underclasswomen from last year (Riley Kitson, Bella Sechrist, and Kira Schrock) and the incoming freshmen will all be instrumental in pushing the top three for spots and helping us replace the depth that has been such a big advantage for us the past several years.

Numbers of years as head coach:

Coach’s comments on the upcoming season: Tate and Taylor should lead the team. Rylee has worked hard on her game this summer. We are fairly inexperienced. It will be fun to see how we can develop.

Coach’s comments on the upcoming season: Young team with a lot of new golfers! Enthusiastic group that are very coachable and will improve as season progresses.

Number of years as head coach: 5

Coach’s comments on upcoming season: We are a young team and growing, we hope to improve on last season’s record. The girls and I are excited to get started.