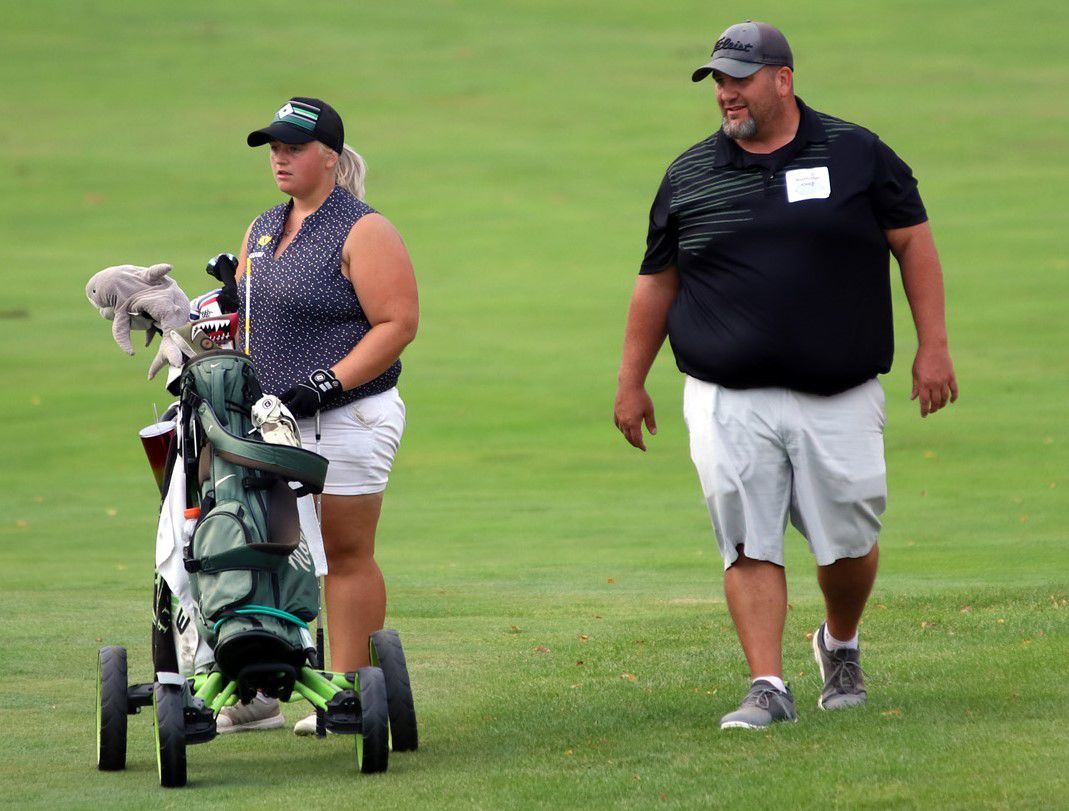 Northridge senior Ashley Brewster, left, and her father, Ken, walk up the 18th green during the girls golf sectional at Cobblestone Golf Course on Sept. 21. Ashley advanced to the state tournament this season for the first time in her high school career. Ken is the head girls golf coach at Northridge. 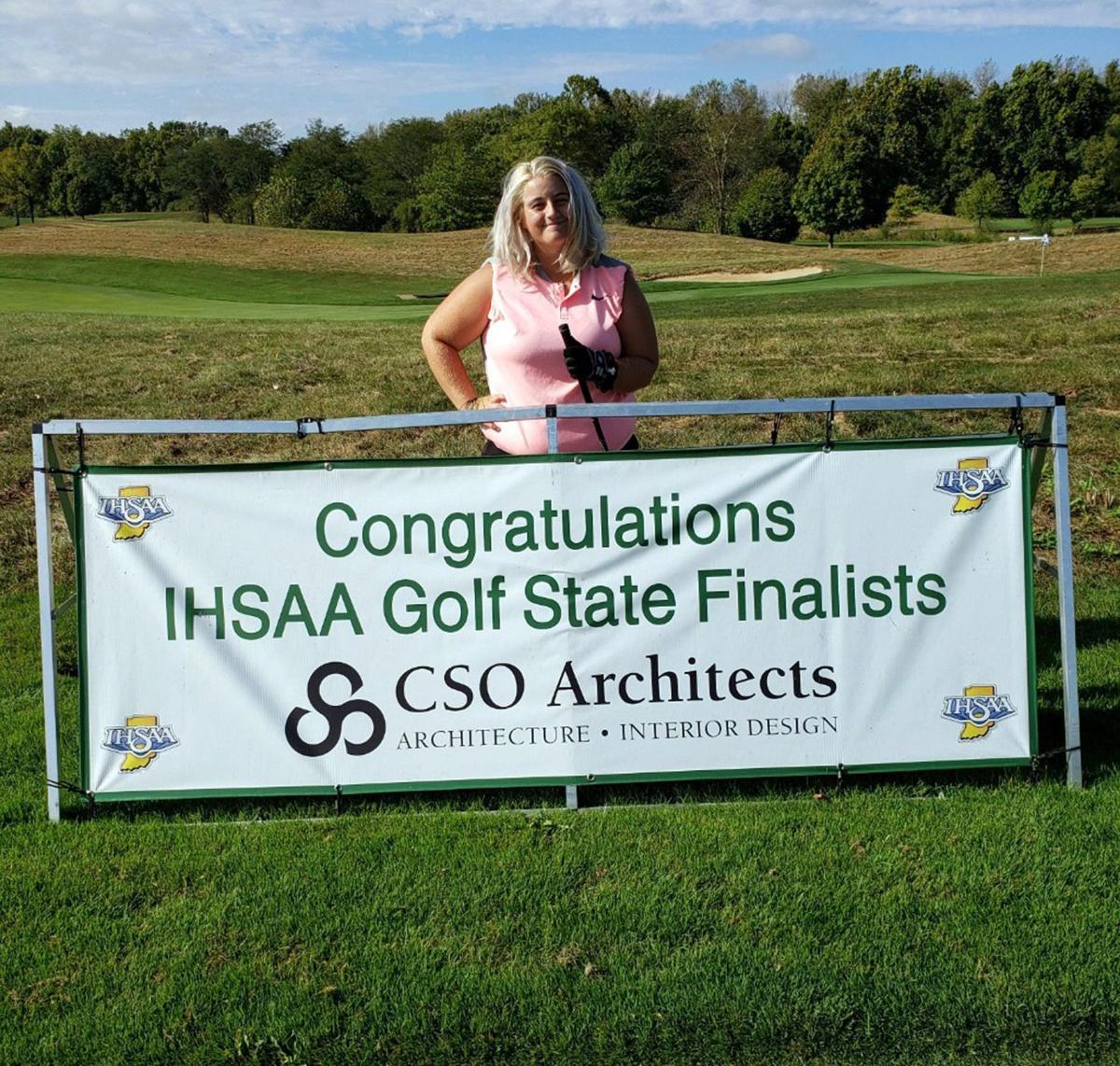 Northridge senior Ashley Brewster finished tied for 56th at the IHSAA State Girls Golf tournament at Prairie View Golf Club from Oct. 4-5. It was the first time Brewster qualified for the state tournament.

Northridge senior Ashley Brewster, left, and her father, Ken, walk up the 18th green during the girls golf sectional at Cobblestone Golf Course on Sept. 21. Ashley advanced to the state tournament this season for the first time in her high school career. Ken is the head girls golf coach at Northridge.

Northridge senior Ashley Brewster finished tied for 56th at the IHSAA State Girls Golf tournament at Prairie View Golf Club from Oct. 4-5. It was the first time Brewster qualified for the state tournament.

MIDDLEBURY — As Ashley Brewster walked off the ninth green at Prairie View Golf Club in Carmel, all she could think about was going to get Chipotle.

Brewster and her dad, Ken, had planned on going to the restaurant following her final round at the IHSAA Girls Golf State tournament last weekend. What they didn’t plan on, though, was how Ashley’s final hole of her high school career would go.

She hit three shots into the hazard and scored a 10. It gave her a 91 in her final round, finishing tied for 56th overall. Ken, who is also Ashley’s coach at Northridge High School, knew there was only one thing left to do.

“All you can say is, ‘Want to go get some Chipotle?’ That was our plan when we were done,” Ken said.

So, Ashley turned in her scorecard, Ken loaded her golf clubs into the car, and the two went to Chipotle.

For Ashley and Ken Brewster, making it to the state tournament was a good enough reward after the last 14 months the Brewster family has gone through.

On Aug. 15, 2018, Ken’s wife and Ashley’s step-mother, Crystal, died from breast cancer at the age of 39. It was Crystal’s third bout with the disease.

Ken, who’s worked at Northridge as a math teacher since 1999, met Crystal when she started working at the school in 2004. They married each other in 2015.

With a then-two-year-old daughter, Anela, at home, Ken couldn’t coach the majority of the 2018 girls golf season. Ashley still played her junior season, though.

“I’m in a lot of things, but with golf, that was probably the hardest thing because (Ken) has always been there,” Ashley said. “It was still something to do and still something I was focusing my energy on, but it wasn’t with him.”

“I wouldn’t have let her stop (playing),” Ken added. “Because I think that helped keep a little bit of a buffer, keep her mind off — I mean, her mind was still on it. But it helped take her away from it a little bit, if that makes sense.”

This year was Ashley’s senior season at Northridge. A four-year varsity player, she steadily improved every year as a Raider in hopes of making it to the state tournament.

“At the end of last season, I ended up missing the chance to play-off to go to state by one stroke,” Ashley said. “I knew I had put in so much work over this summer and throughout the season that I wanted to go. I’ve wanted to go since freshman year.”

Ken resumed coaching the team in 2019, in large part due to the help of his mother, Jeri Brewster. Jeri, who lives in Mesa, Arizona, flew-in and lived with Ken, Ashley and Anela for the duration of the girls golf season. Jeri would take care of Anela while Ken worked and coached golf.

With her father back coaching, Ashley continued to improve her play. She shot a 78 at the sectional, helping the Raiders three-peat as sectional champions. Ashley then shot a 78 at the regional, which left her uncertain if it would be a good enough score to advance to state as an individual. She had missed a birdie putt on her final hole to give her 78, making her think her high school career was over.

“It lipped out, and I was like, ‘OK, it’s a 78.’ In my mind, that’s it for the high school career, the tears start flowing, I walk off the course,” Ashley said.

What Ashley didn’t know was that her 78 knocked five players out of a potential playoff to see who would go to the state tournament. No scores that came in after hers finished lower, meaning Ashley was the last person to advance to state from the East Noble regional.

“It was just so crazy. It was so relieving,” Ashley said. “I didn’t even know what to do because I had worked four years for it. It was finally going to happen for me, so it was crazy. It was so many things at one time.”

The state tournament didn’t go the way both Ashley and Ken wanted it to. They entered the weekend hoping to finish in the top 25. After shooting an 85 and finishing the first round tied for 42nd, their new goal was to stay in the top 50. The disastrous final hole left her finished tied for 56th.

The emotions for the two were more frustration than anything as Ashley finished her final hole as a high school student. After the initial frustration, though, came the real emotions.

“I think I was more emotional as she was trying to finish that last hole … just to watch the disaster, the meltdown — it was tough,” Ken said. “And then to know that was her last time playing for ‘the colors’ — I didn’t think that would be as big of a deal for me, but it did hit me.

It hasn’t been easy for the Brewster family since the fall of 2018. Having the state tournament weekend together, though, was a moment Ashley will appreciate for the rest of her life.

“I think last year made me more grateful for this year,” Ashley said. “Having something where it’s just everything seems to fall apart and it’s like, ‘Well, I’ve been working and, all of a sudden, a huge roadblock. And, it’s no one’s fault. It’s just there.’ And so being able to get the result we’ve been working for the entire time, it did make it a little bit nicer. You don’t know how hard something is until you go through the worst of it.

“There are girls who go to state every single year and don’t think much of it. But I know I have a certain appreciation for it, and that makes it a little bit better.”