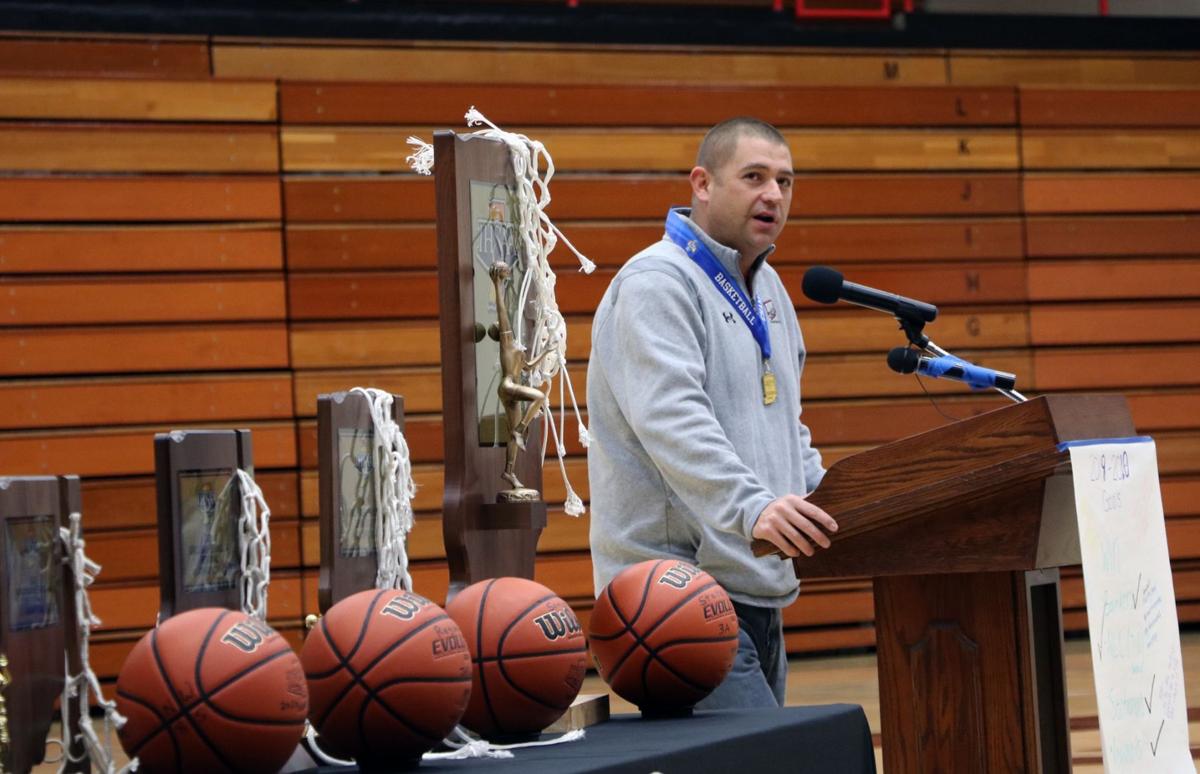 NorthWood girls basketball coach Adam Yoder speaks during the community pep rally on March 1. Yoder has been selected as the 2019-20 Goshen News All-Area Girls Basketball Coach of the Year after leading NorthWood to a state championship. 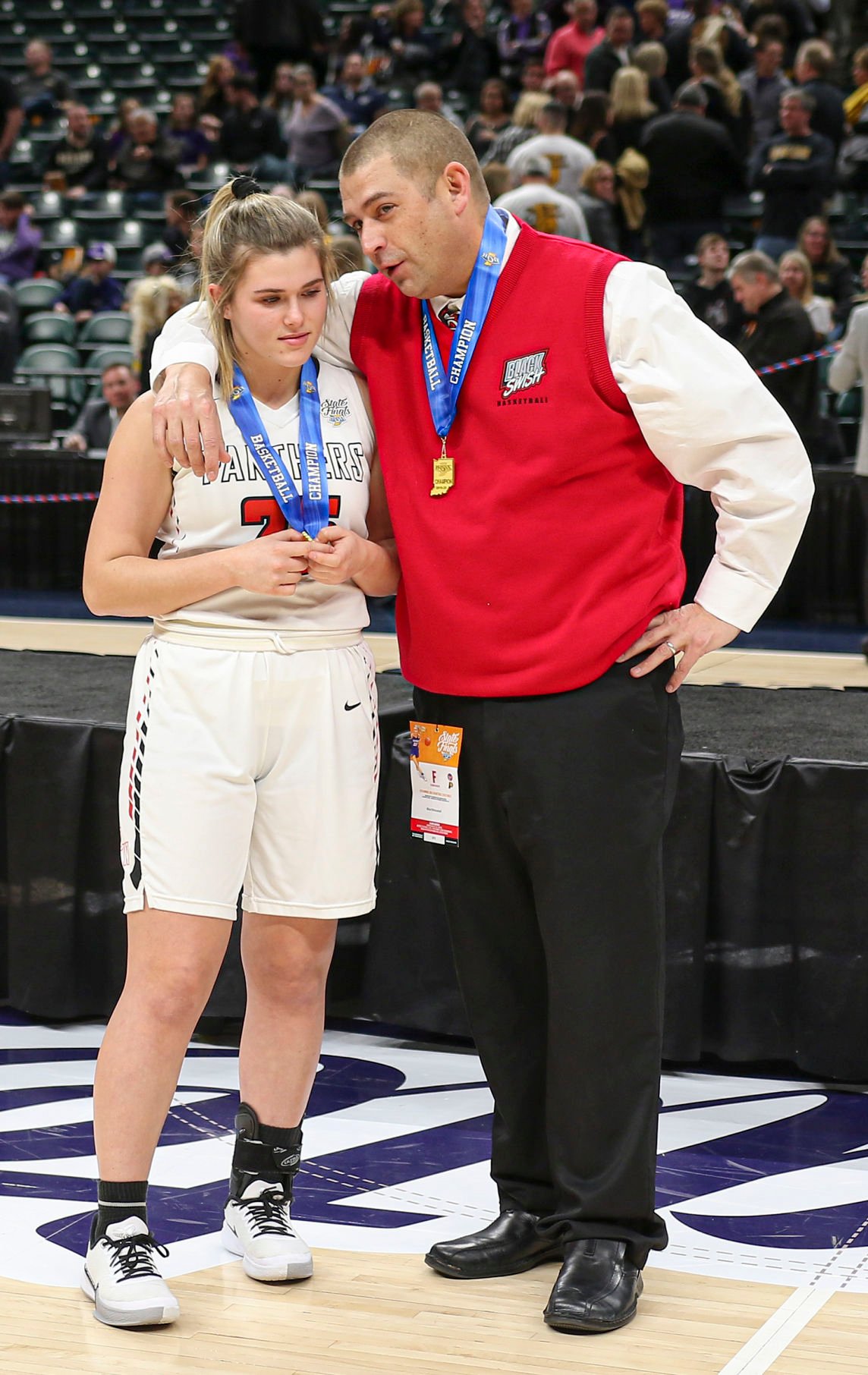 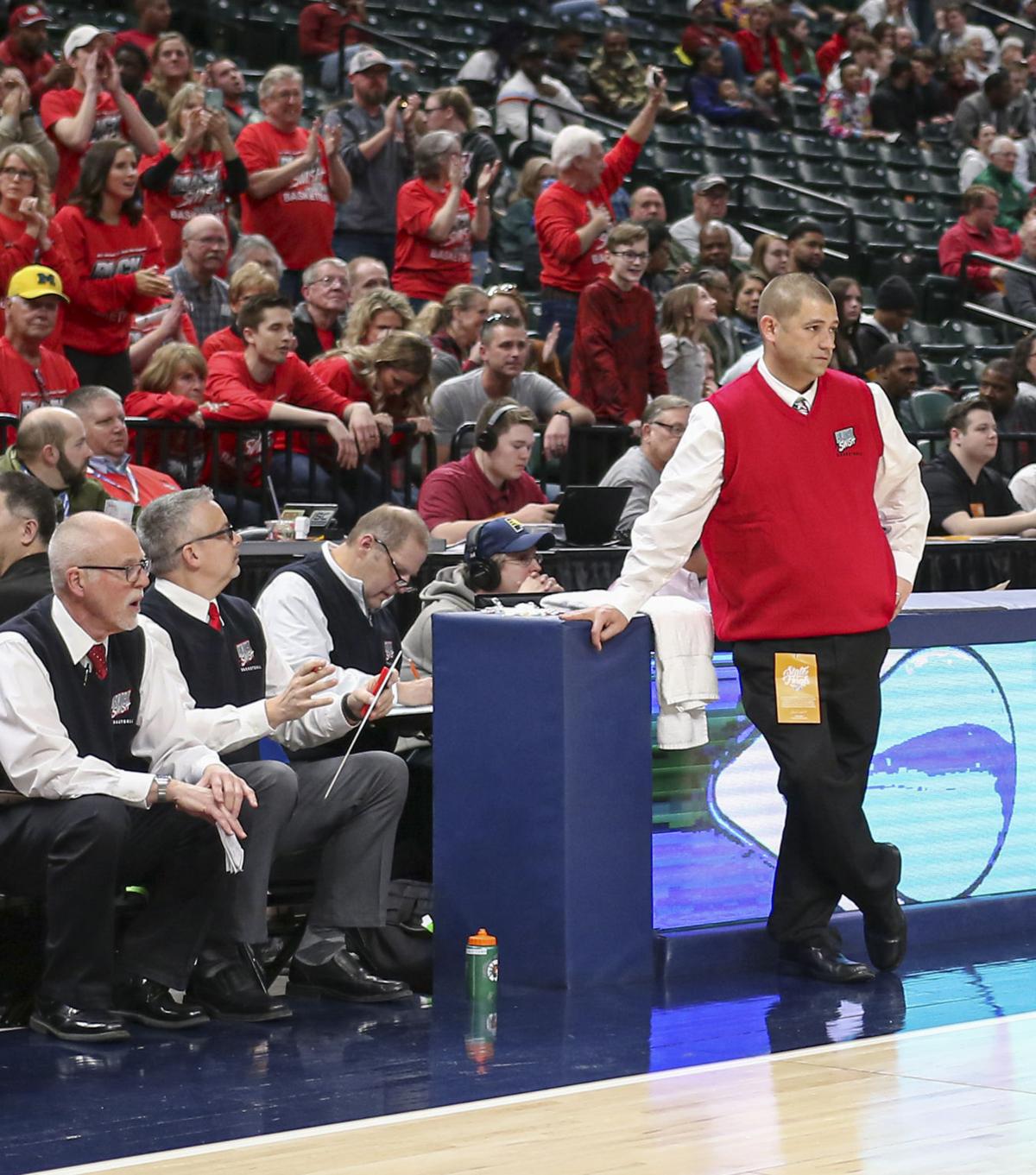 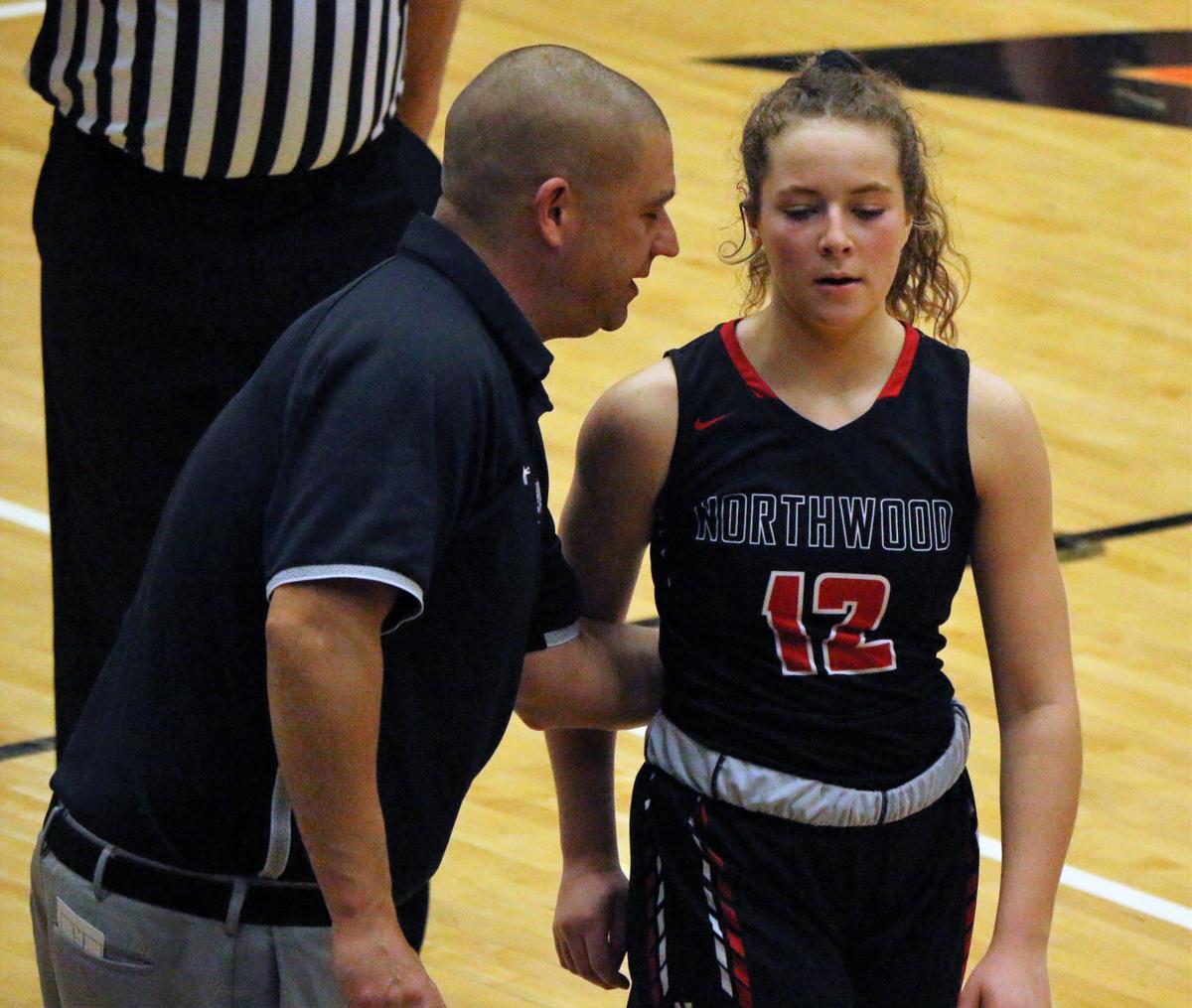 NorthWood head coach Adam Yoder chats with junior point guard Alea Minnich (12) during a free throw attempt in the fourth quarter of their semistate game with Benton Central this Feb. 22 in LaPorte. 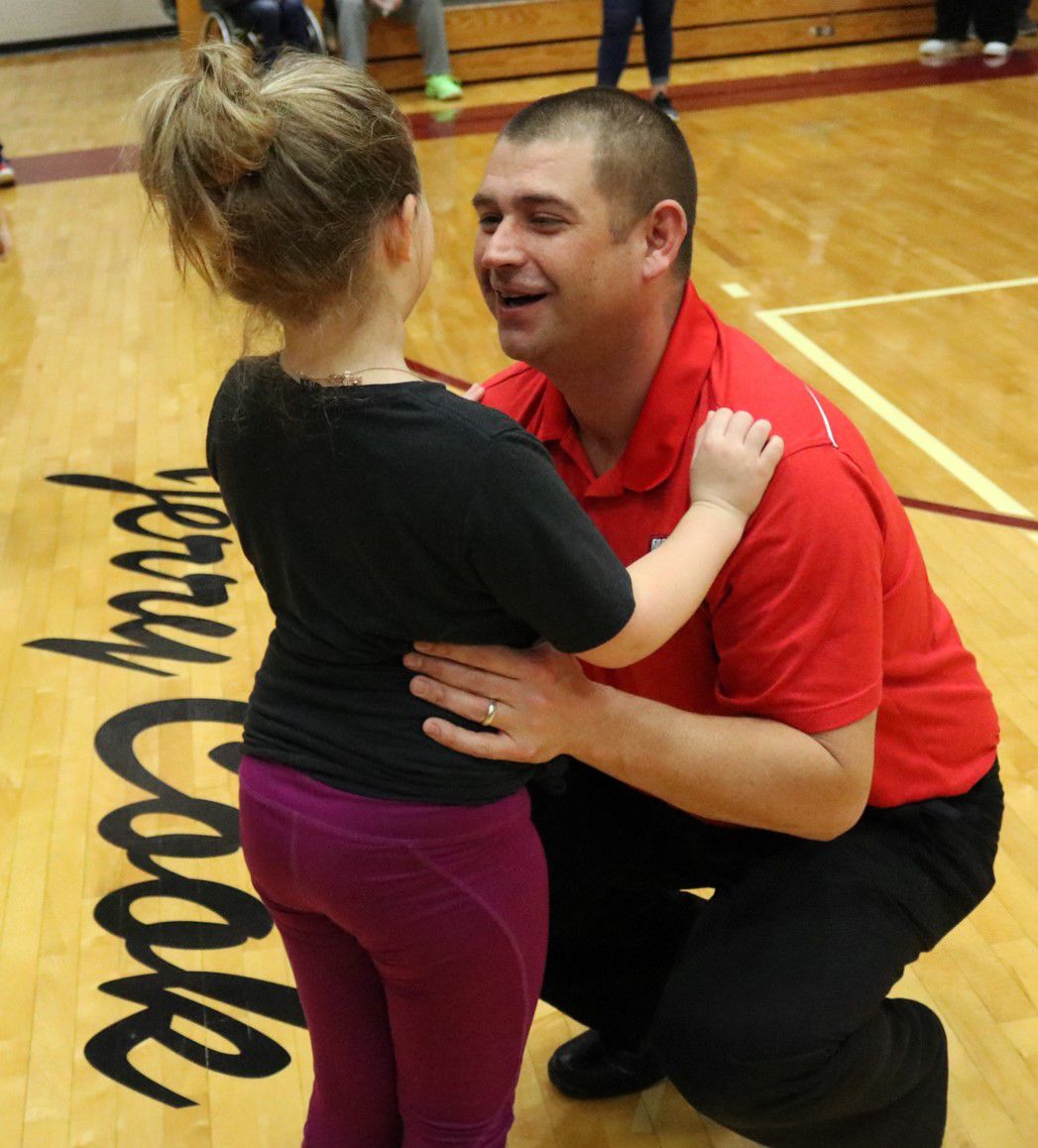 NorthWood girls basketball coach Adam Yoder speaks during the community pep rally on March 1. Yoder has been selected as the 2019-20 Goshen News All-Area Girls Basketball Coach of the Year after leading NorthWood to a state championship.

NorthWood head coach Adam Yoder chats with junior point guard Alea Minnich (12) during a free throw attempt in the fourth quarter of their semistate game with Benton Central this Feb. 22 in LaPorte.

NAPPANEE — When you win a state championship as a head coach, chances are you’re going to receive numerous honors.

Well, add another one to the list for Adam Yoder, as he is the 2019-20 Goshen News All-Area Girls Basketball Coach of the Year. Yoder guided NorthWood to a 28-3 record, winning sectional, regional, semistate and the Class 3A state championships along the way.

Yoder received co-coach of the year honors in District 1 from the Indiana Basketball Coach’s Association on Monday. He shared the honors with Angola’s Brandon Appleton. The IBCA chooses two coaches from each of its three districts in the state as its coaches of the year.

“Any time a head coach wins an award, it’s a measure of their players and their staff,” Yoder said. “I was very fortunate to have state championship level groups in both groups this year. This is their award, not mine.”

It was a season that started off a little shaky for the Panthers. With their top nine players all having played a fall sport, there was as re-acclimation period to basketball in the beginning of the year. NorthWood suffered two 15-plus point losses in November, losing by 18 to Penn and 20 to Norwell.

After the loss to the Norwell Knights on Nov. 23, the Panthers rattled off 15 wins in a row. An early stretch in that winning streak is when Yoder figured out his team was going to be OK.

“When I really felt like we were starting to ‘get it’ was after the stretch of wins in December vs Warsaw, Concord, Plymouth, and Bremen—all except Concord being the road,” Yoder said. “I felt we ‘got it’ after beating Tippecanoe Valley in the regular season.”

That regular season game against Tippecanoe Valley saw NorthWood win by 26 points at home. The Panthers would only have one more loss in the season after the Norwell game to take a 21-3 record into the postseason.

In the Class 3A, Sectional 20 round, NorthWood defeated Tippecanoe Valley (48-39), West Noble (40-36) and Lakeland (56-34) to win its first sectional title since 2014. The following Saturday in the Jimtown regional, the Panthers avenged a loss against Mishawaka Marian (44-38) before beating Knox (43-30) to win a regional championship for the first time since 2005.

With one game to go before the state title game, NorthWood put on a defensive clinic in the semistate game against Benton Central. The Panthers held the Bison to 44 points below their season average, winning 36-22 to advance to the program’s second state championship game appearance.

The season’s journey then culminated Feb. 29 at Bankers Life Fieldhouse in Indianapolis, where NorthWood beat Salem, 37-29, to win the Class 3A state championship. It was the second state title in program history, as the 1999 team brought home the 3A state trophy as well.

Yoder thought a run at a state championship was possible all season long.

“Honestly? Yes,” Yoder said. “We knew even last summer — as a staff at least — that we would have a chance to be really good. We knew it would take a lot of patience and commitment to our process, but yes, I personally thought this was 100 percent possible. That is mainly due to the type of committed, high-character people I knew we had on our team and on our staff.”

After six seasons leading the girls basketball program to a 109-48 record, Yoder is stepping down from the position. He announced his resignation via social media on March 13.

Many people saw it as a way for Yoder to “go out on top.” The coach made sure to clarify he still wants to get back into coaching basketball someday and the results of this postseason didn’t affect his decision.

“I’m not retiring. I’m just resigning for now,” Yoder said. “Our IHSAA tourney run had zero to do with that decision. But … yeah, it worked out kind of nicely for me, personally (winning a state championship).”

Although this is it for now for Yoder in terms of coaching basketball, he still has other responsibilities at NorthWood. He’ll remain the girls golf coach and teach social studies at the high school.

Yoder also has a wife and two children under the age of 10, so any sort of down time he would have from not coaching basketball will be filled.