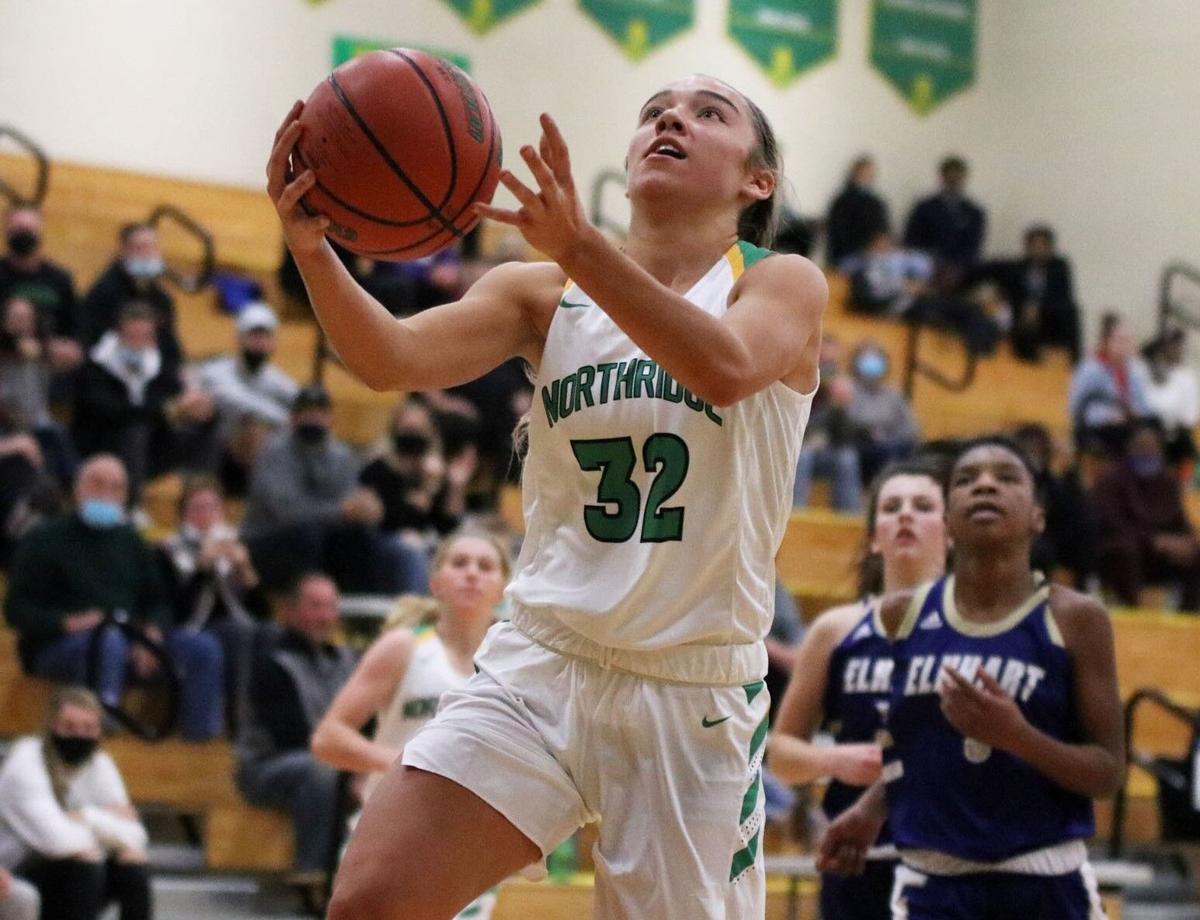 Northridge sophomore Eva Fisher goes up for a layup in the second quarter of the Raiders' 61-41 victory over Elkhart Tuesday in Middlebury. 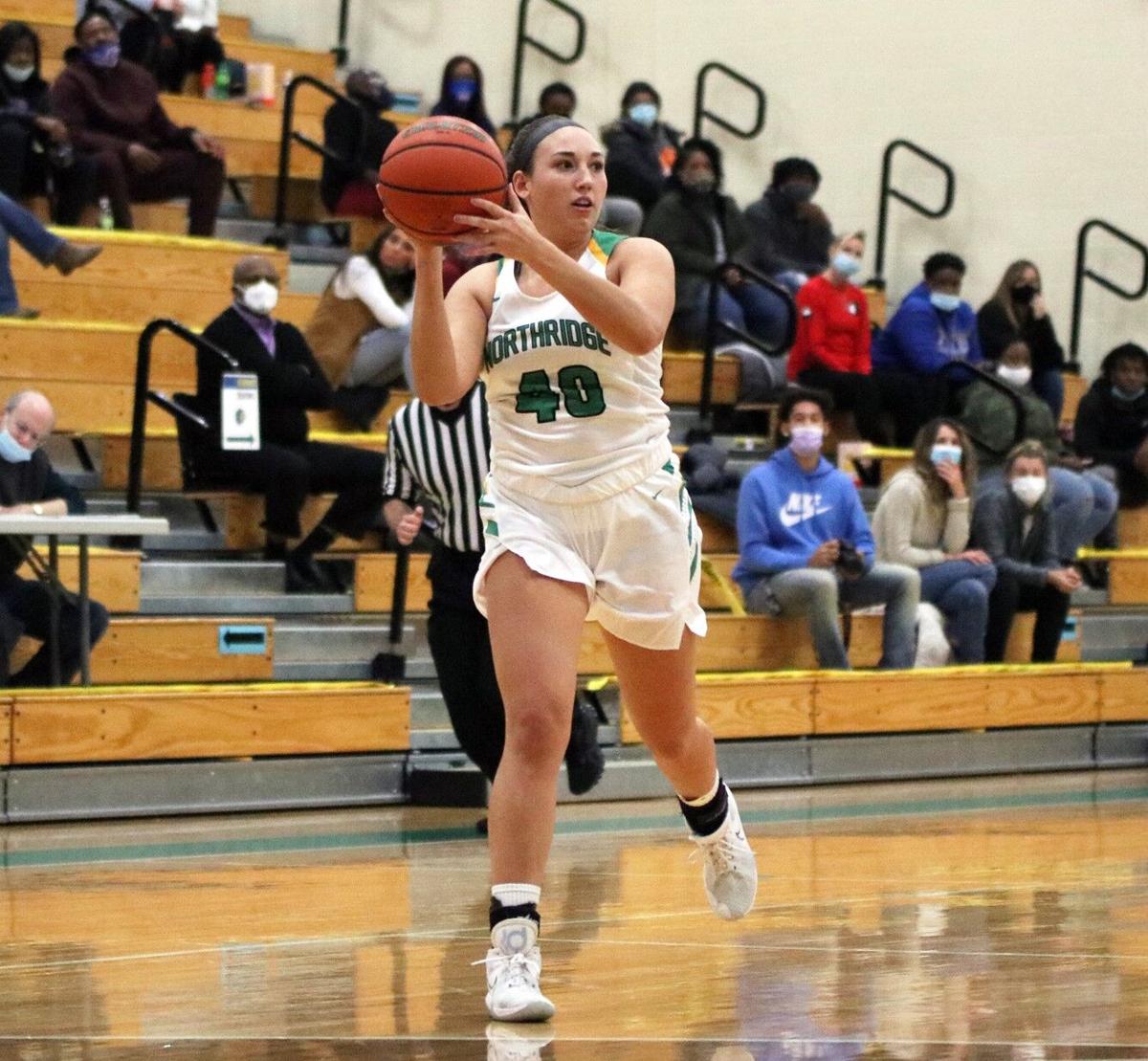 Northridge senior Makena Knepp looks to make a pass upcourt in the first half of the Raiders' 61-41 victory over Elkhart Tuesday in Middlebury.

Northridge sophomore Eva Fisher goes up for a layup in the second quarter of the Raiders' 61-41 victory over Elkhart Tuesday in Middlebury.

Northridge senior Makena Knepp looks to make a pass upcourt in the first half of the Raiders' 61-41 victory over Elkhart Tuesday in Middlebury.

MIDDLEBURY — Once Northridge made its first ‘3,’ they didn’t stop making them Tuesday night against Elkhart.

The Raiders girls basketball team drilled eight 3-pointers, including five in the first half, to cruise past the Lions, 61-41, in a non-conference showdown in Middlebury.

“We haven’t been shooting the ball very well, and we knew that this team could shoot it,” Northridge coach Doug Springer said. “We see it at practice, but it was just one of those where we were waiting for the roof to come off, and boy, did it come off (Tuesday night).”

Senior Makena Knepp was on fire from long range to start the game, knocking down three of those 3-pointers in the first game. She had 11 points by the end of the frame and finished the night with 16.

The offensive star for Northridge the remaining three quarters was sophomore Eva Fisher. After tallying four points in the first period, she scored seven in the second, nine in the third and four in the fourth to finish with a career-high 24 points.

“Eva, she’s a special player; she really is, and you’re starting to see it,” Springer said. “She’s starting to come into her own a little bit. She’s starting to get comfortable doing some things, and her jump shot’s coming along. I’m glad we’ve got her for the next three years.”

Passing the ball was key for the Raiders Tuesday as well, as more than half of their made shots were assisted on. They finished with 16 assists on 23 made field goals.

“We’ve been really working on our passing,” Springer said. “We’ve got a lot of capable players that are just now starting to come into their own, and they’re starting to grow up in front of our eyes.”

Elkhart’s only lead came at 2-0 to start the game. The Raiders countered with a 12-0 run afterwards and never looked back. They led 22-8 after the first quarter and 36-18 at halftime.

“The start, obviously, was huge,” Springer said. “Anytime you can get out to a good lead like that with the energy that we had was outstanding. But, every time they made a run — they would go on little 4-0, 5-0 mini runs, and that’s what we’ve been talking about with this team is that we have to stop runs. That’s kind of been our Achilles Heel, and our girls did it tonight: they stopped the runs and then put a big run back together.”

Other scorers for the Raiders were Jaci Walker with nine points, Madyson Gorball four points and Colleen Miller three. After the game, Northridge honored the three senior players — Walker, Knepp and Brylee Froman.

Northridge (4-2) will now compete in the NECC-NLC shootout this Saturday at Northridge. Originally featuring Concord as well, the Minutemen had to withdraw from the contests due to COVID-19 concerns within the program.

Instead, the Raiders will play Angola at 10 a.m., followed by Fairfield at 3 p.m. While Northridge will be the only team playing in two games amongst the three teams, Springer is excited for the challenge of competing against two of the best the Northeast Corner Conference has to offer.