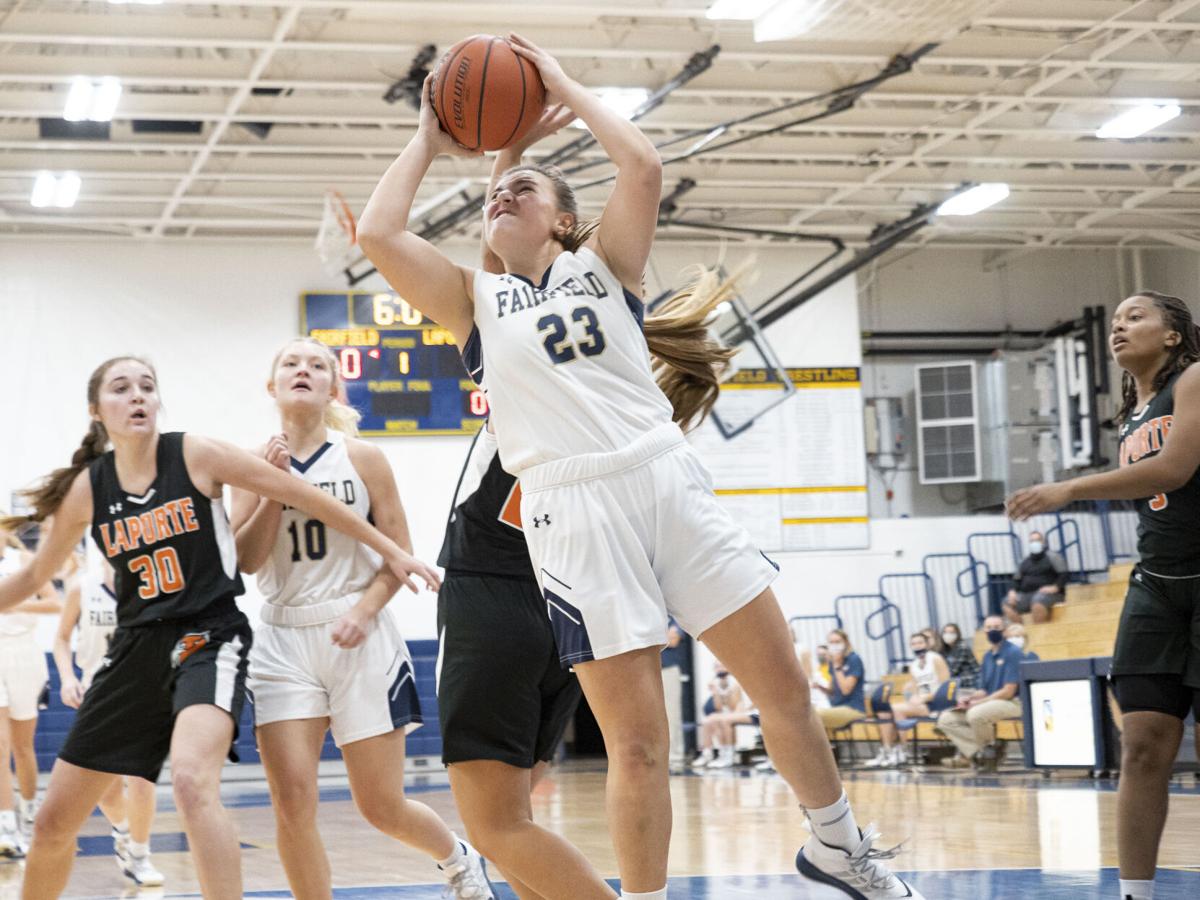 Fairfield Falcons junior Brooke Sanchez (23) goes up for a basket during Friday’s game at Fairfield Jr./Sr. High School in Benton. 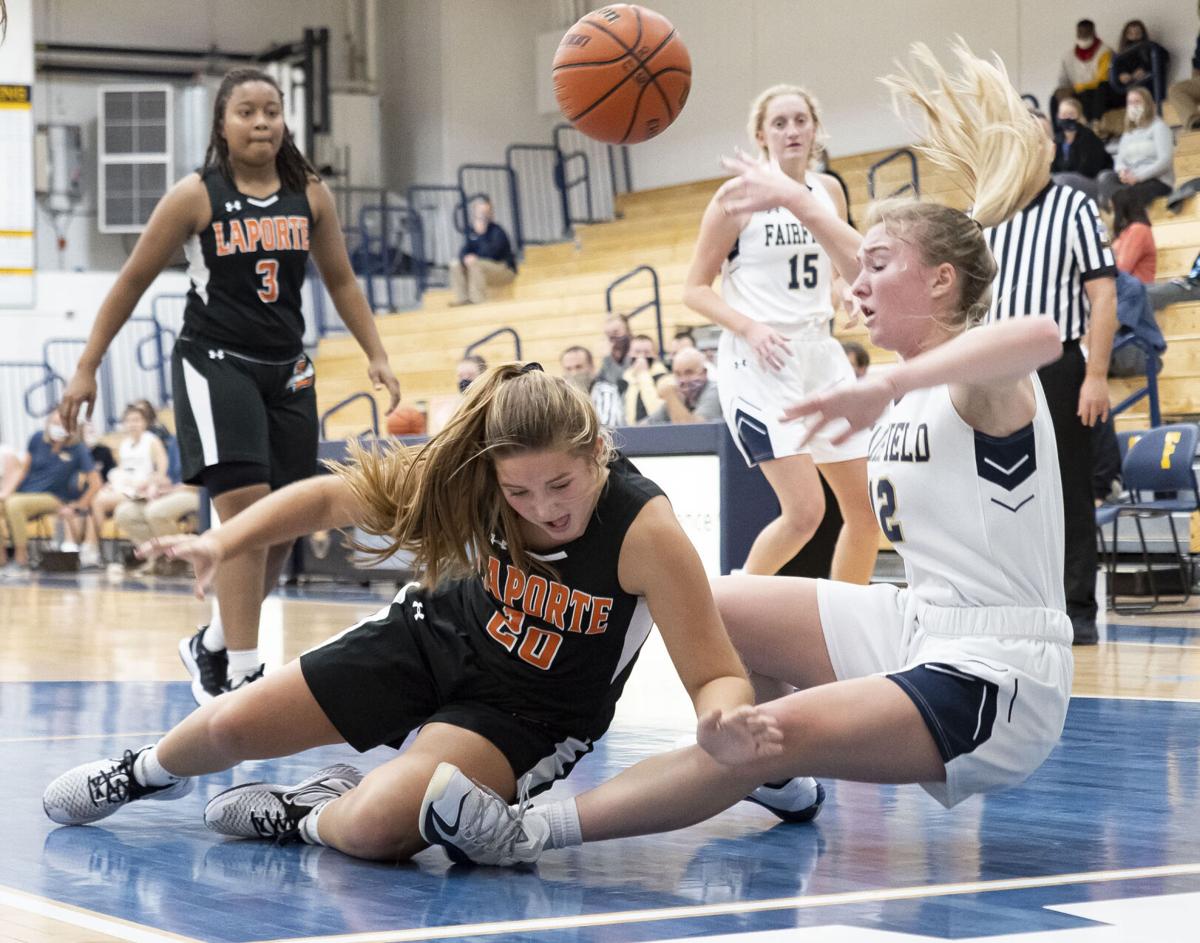 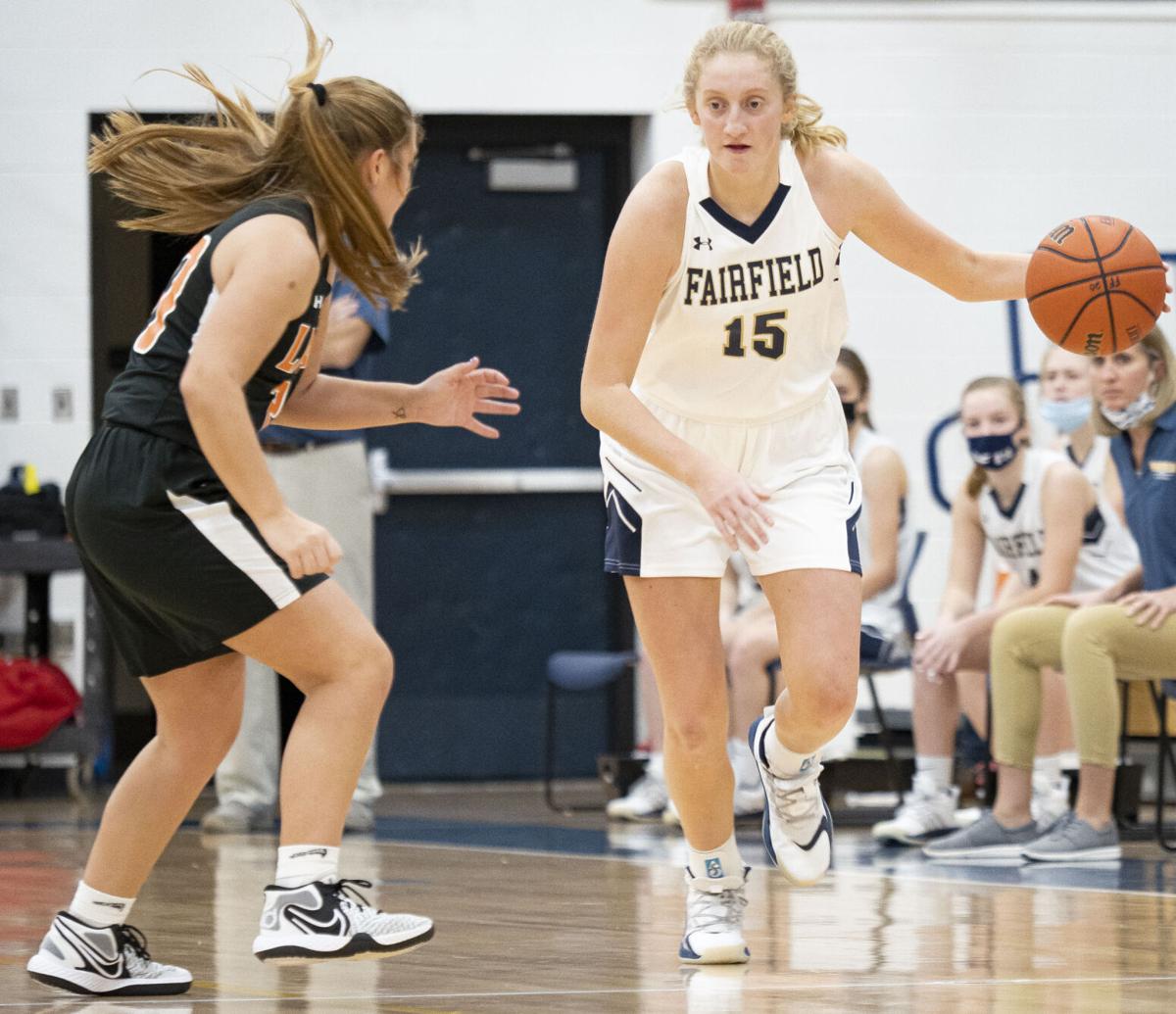 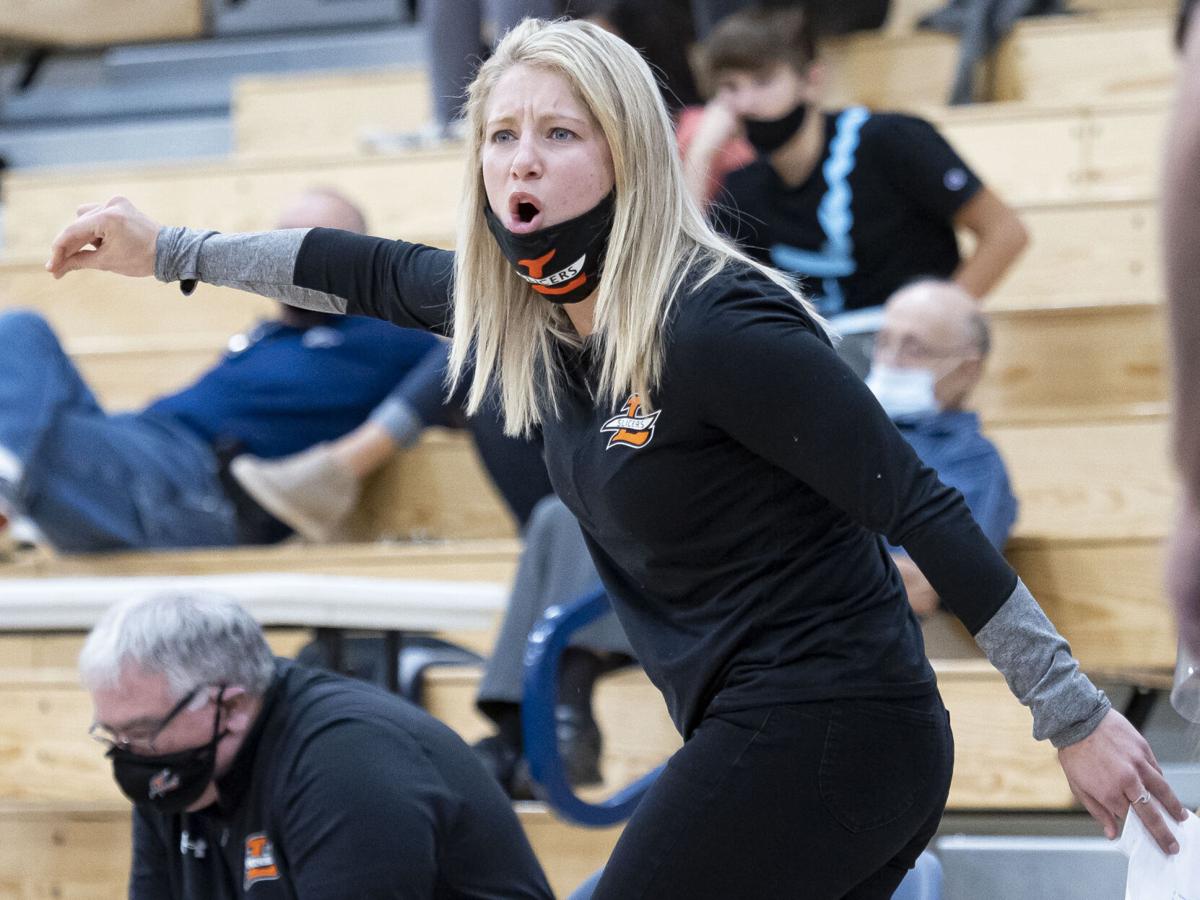 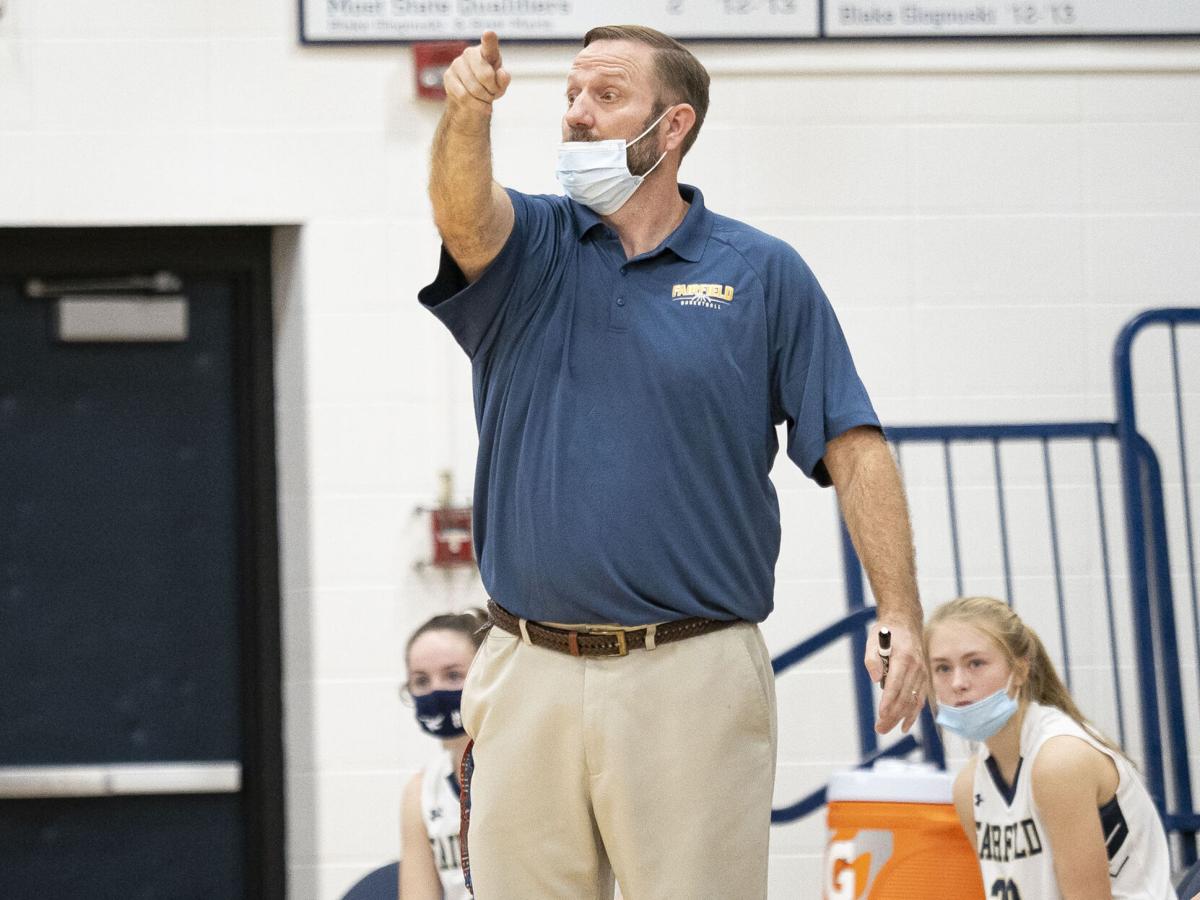 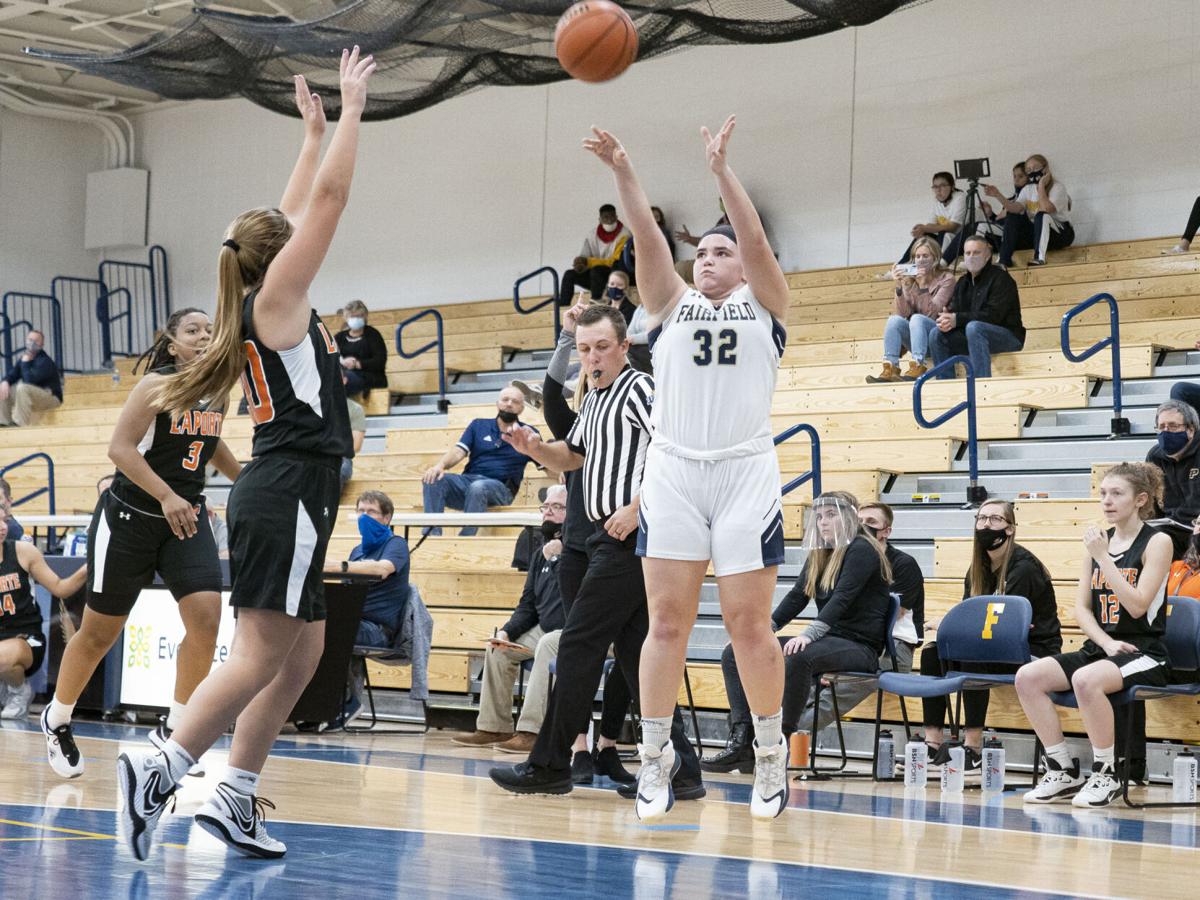 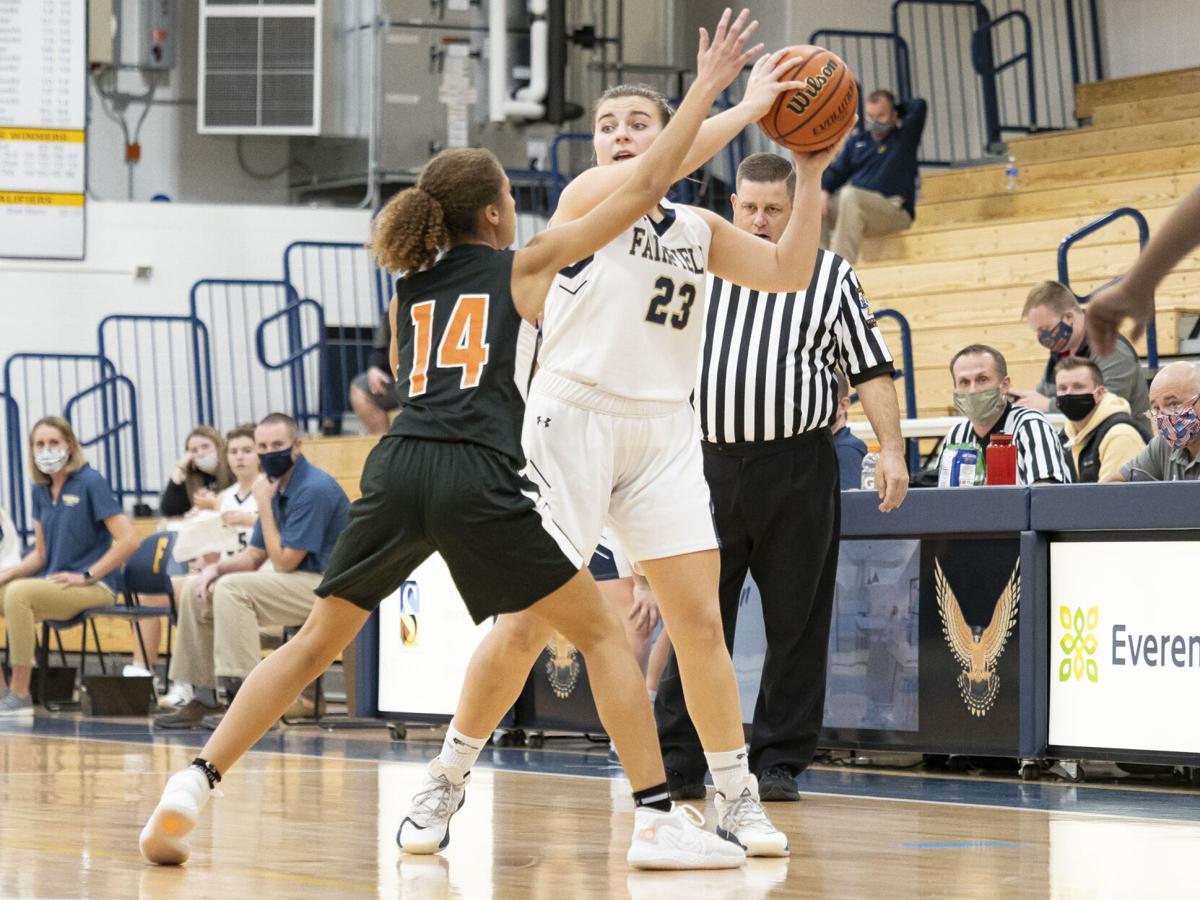 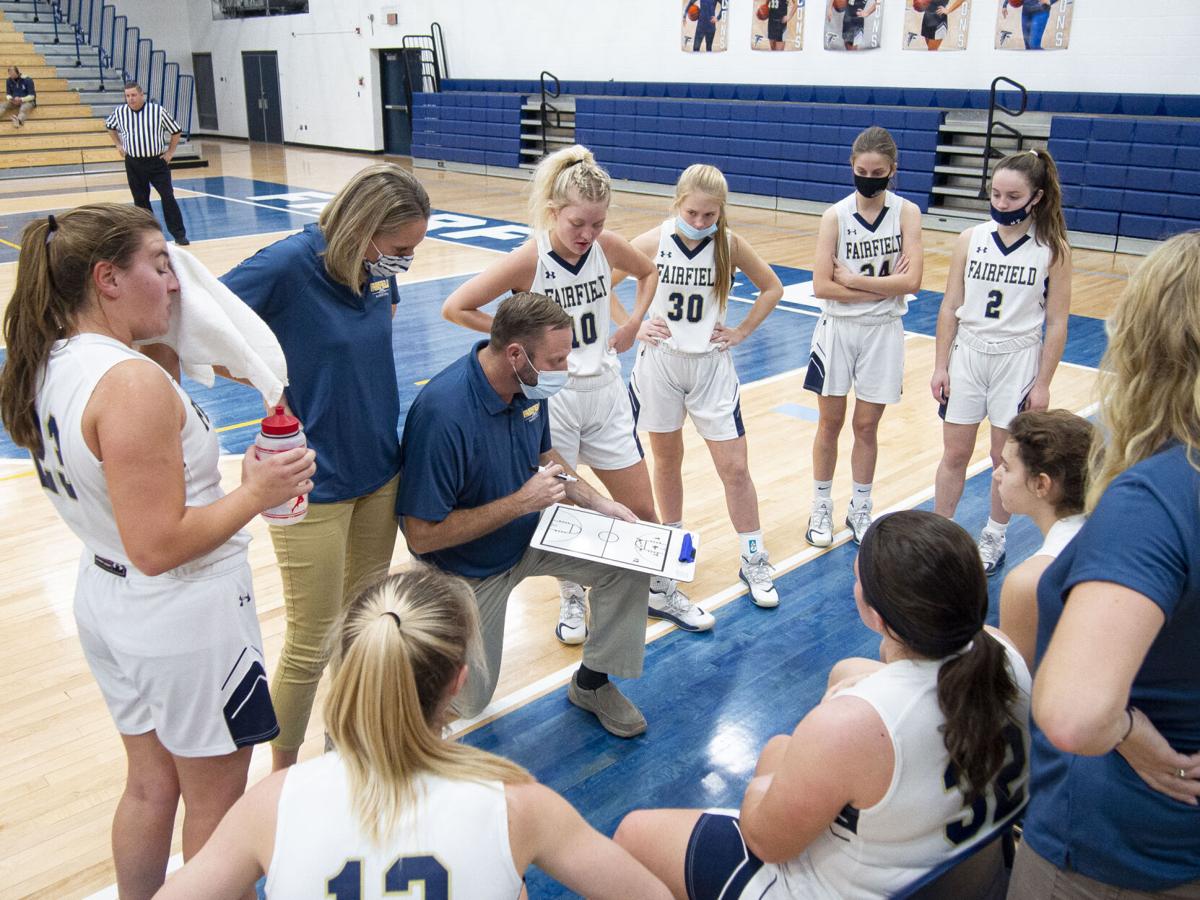 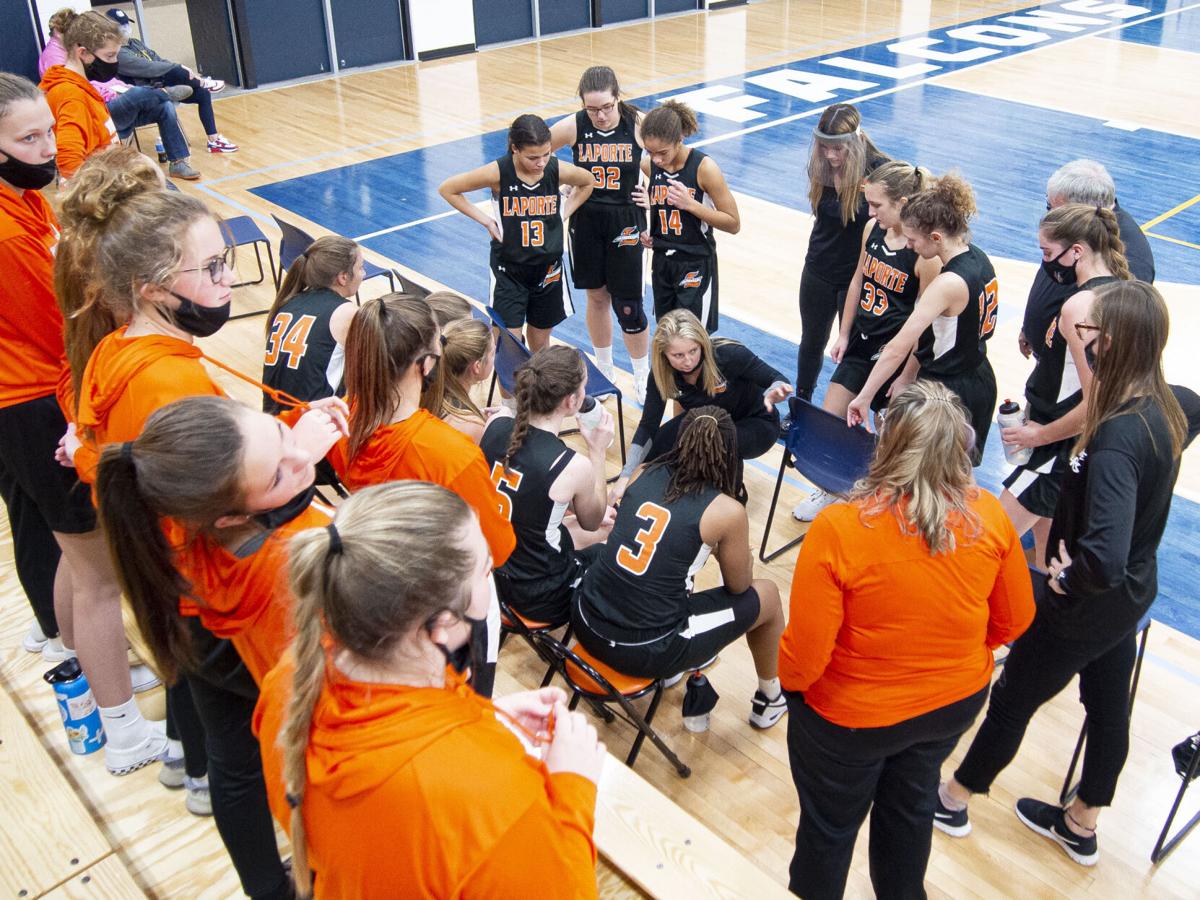 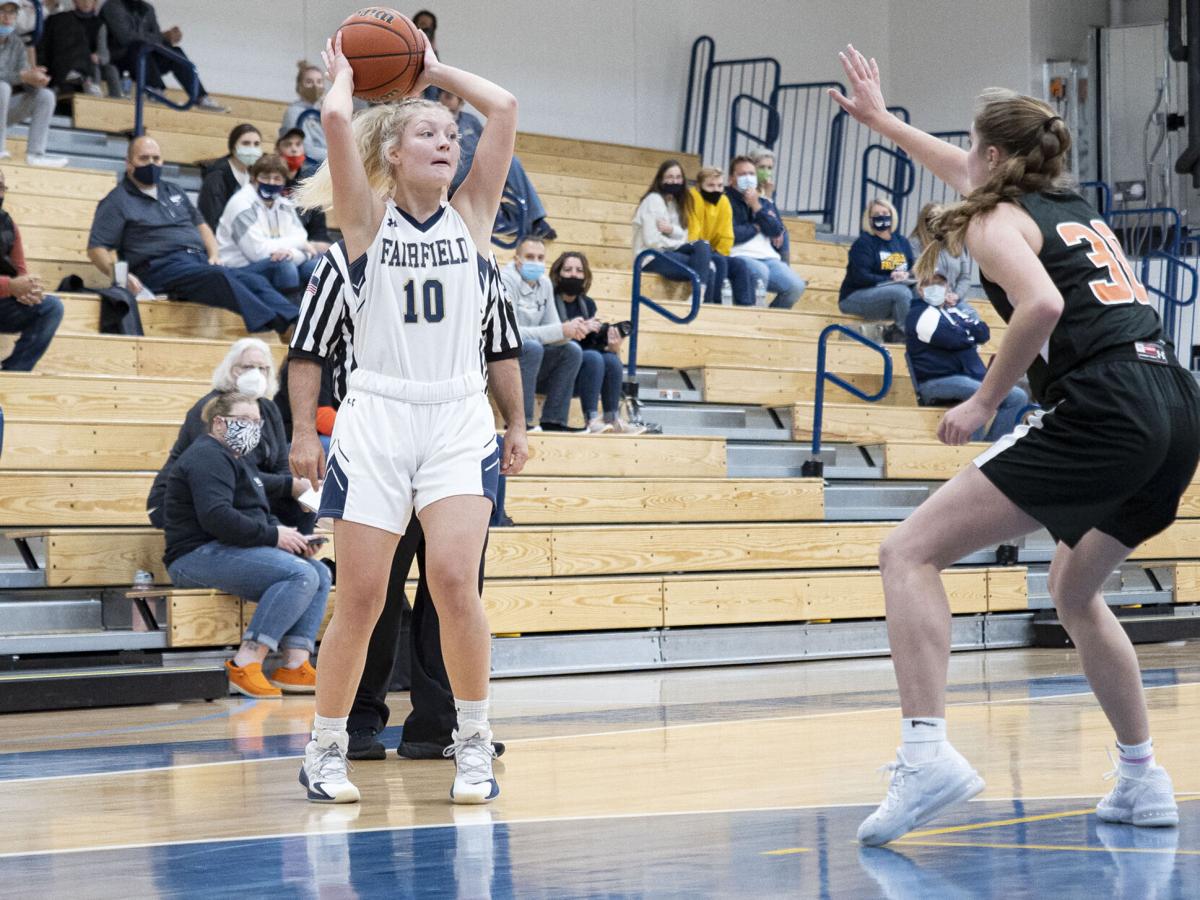 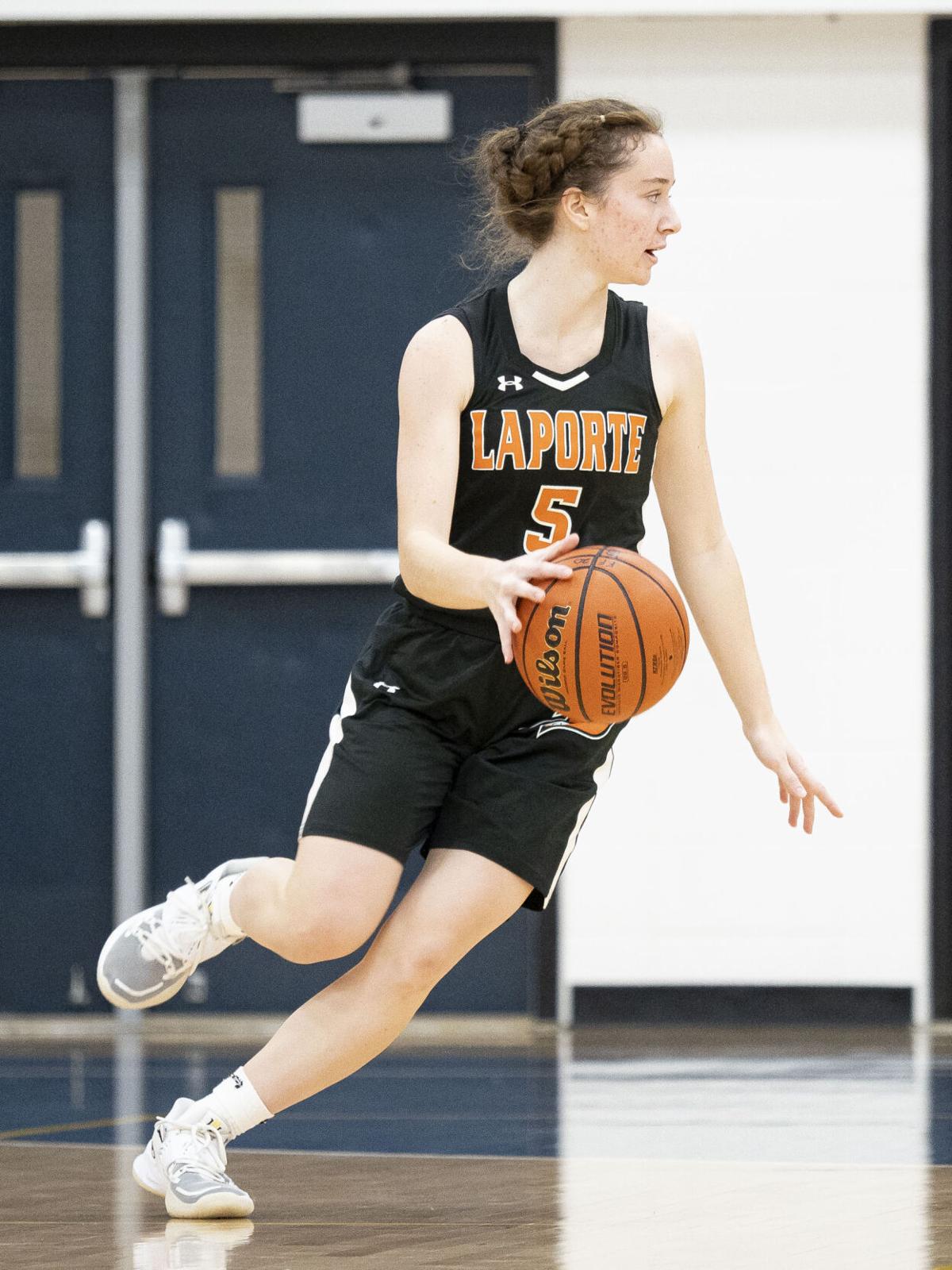 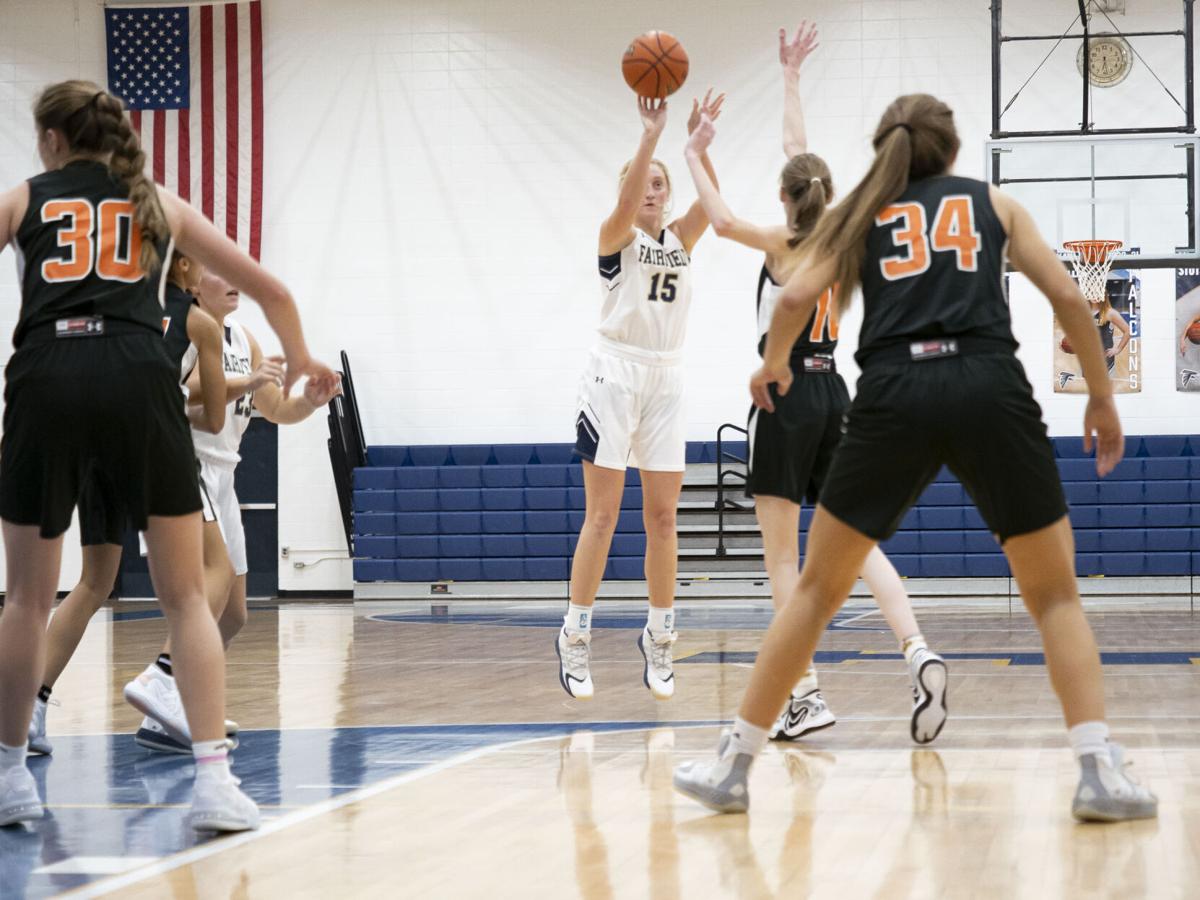 Fairfield Falcons junior Brooke Sanchez (23) goes up for a basket during Friday’s game at Fairfield Jr./Sr. High School in Benton.

GOSHEN — John Harrell, who runs the website for all-things Indiana prep football and basketball, posted a sobering stat on Twitter during the week that illustrated just how much impact the COVID-19 pandemic has had on the girls basketball season in just three weeks.

“This is the 3rd week of the girls’ basketball season, and 51 teams have yet to play a game,” Harrell tweeted Thursday.

That’s why Fairfield coach Brodie Garber is just thankful his team has played five games so far this season.

The Falcons have won all five, including a 27-17 victory over LaPorte Friday at home. With most teams in the area having played three or less games in the first three weeks, being 5-0 is just an added bonus for Garber.

Fairfield once again relied on its defense to knock off the Slicers. A day after beating Churubusco, 54-19, the Falcons allowed just 17 points to LaPorte. They’ve held all but one of their opponents to 22 points or less in their first five games.

“The girls work so well together,” Garber said. “It’s almost like, a lot of times, they’re tied together with a rope and they’re moving together. You can’t play defense without communication. The six (players) that got the bulk of the minutes tonight all pretty much played together last year, and I think that’s a pretty big key.”

LaPorte scored five of its 17 points in the first 90 seconds of the game, as the Slicers raced out to a 5-0 lead. Garber said he didn’t sense any panic in his team despite the early deficit.

“You look at our roster and say that we’re not a veteran group when there’s three sophomores and a junior that get a lot of time, but all of them went through a varsity season already,” Garber said. “A lot of them play a little older than they are, and of course for the seniors, this is their third year on varsity. There’s a certain calmness effect; 5-0 I don’t think really phased them.”

Fairfield then countered with a 10-0 run to take a lead they would never relinquish. Ball movement was the key for the Falcons, as all three made field goals in the first quarter were assisted by sophomore Brea Garber. After junior Brooke Sanchez started the scoring with a free throw, sophomore Bailey Willard, Sanchez and then Willard again sank ‘3’s’ off of assists from Brea Garber.

“That’s five people not really caring who gets the shot,” Garber said. “We’re just going to work it until we get a pretty good, open shot. The team comradery when it comes to that is huge.”

Fairfield led 12-8 after the first quarter. They would build the lead to 11 by halftime on the strength of their defense. They forced nine turnovers in the first half and 15 in the game overall.

The Falcons have used the zone defense effectively all season, which caused a bulk of the turnovers Friday. Garber said they fluctuate between man-to-man and zone defenses early in a game before determining which one to use primarily throughout the remainder of the contest.

“A lot of times, we come out and start with a defense … and then eventually we just roll with the one that seems most effective,” Garber said.

The second half was far from pretty. Both teams only made two field goals the entire half, one in each quarter. LaPorte outscored Fairfield, 5-3, in the third and the Falcons outpaced the Slicers, 3-2, in the final frame.

“We got shots that we wanted, whether it was some wide-open outside shots — definitely some under the basket that we have to finish,” said Garber of the second half offensive struggles. “You’re not going to finish 100 percent of them, but those underneath the basket have to be made 80 to 90 percent of the time. The girls know that.”

Offensively, Willard led with 10 points. Sanchez and Brea Garber had six points each, Morgan Gawthrop and Mackayla Stutsman two each and Laney Faldoe one.

Fairfield now takes the next week off before coming back to compete in the NECC-NLC Shootout on Sat., Nov. 28. They will play at Concord at 11:30 a.m., then travel to Middlebury to play Northridge at 4:30 p.m.