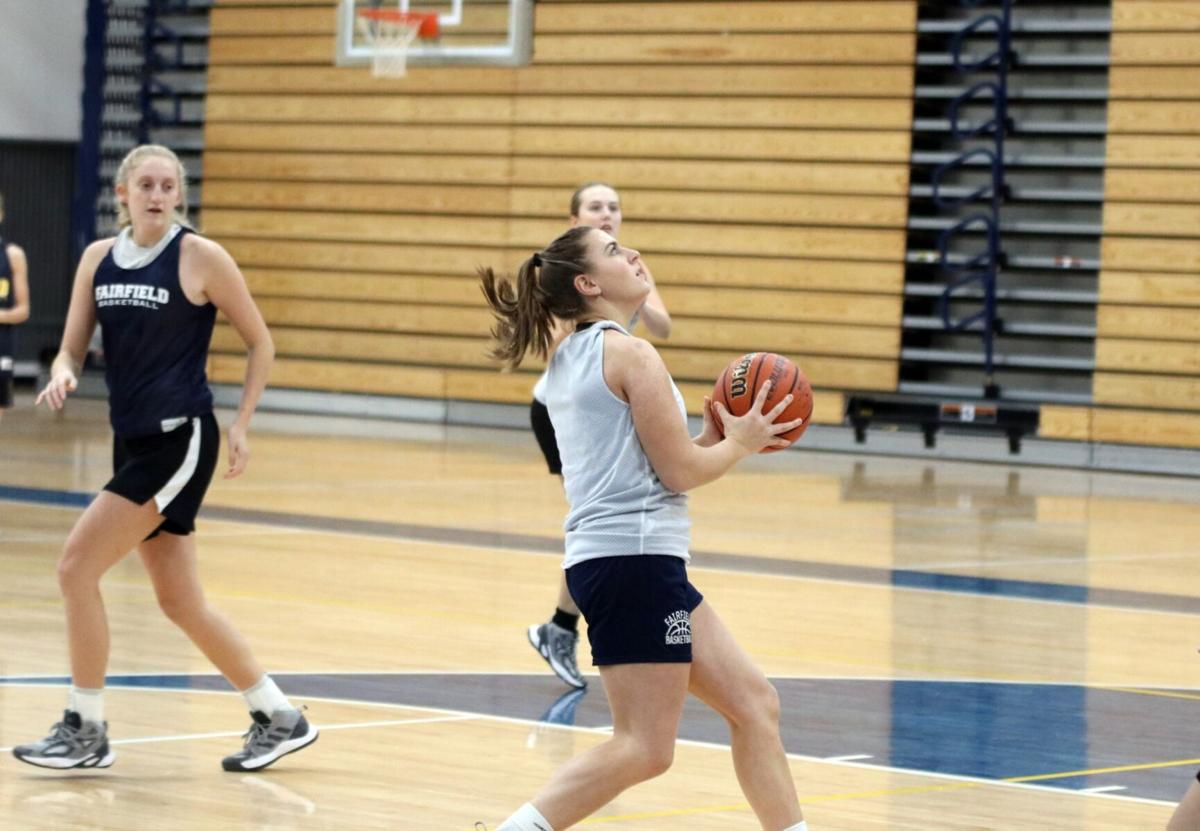 Fairfield senior Brooke Sanchez, center, goes up for a shot during practice Tuesday at Fairfield High School in Benton. The Falcons are off to a 9-0 start this season, the best in program history. 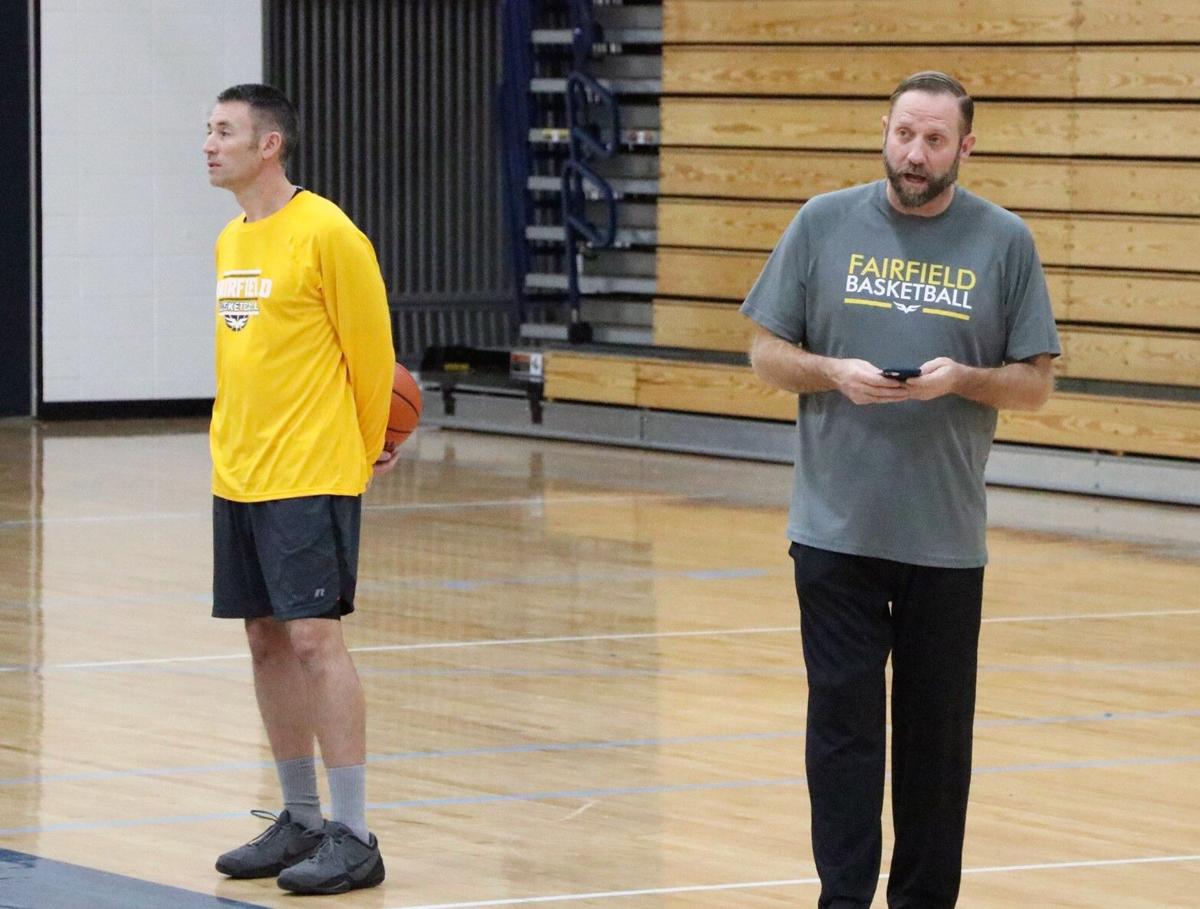 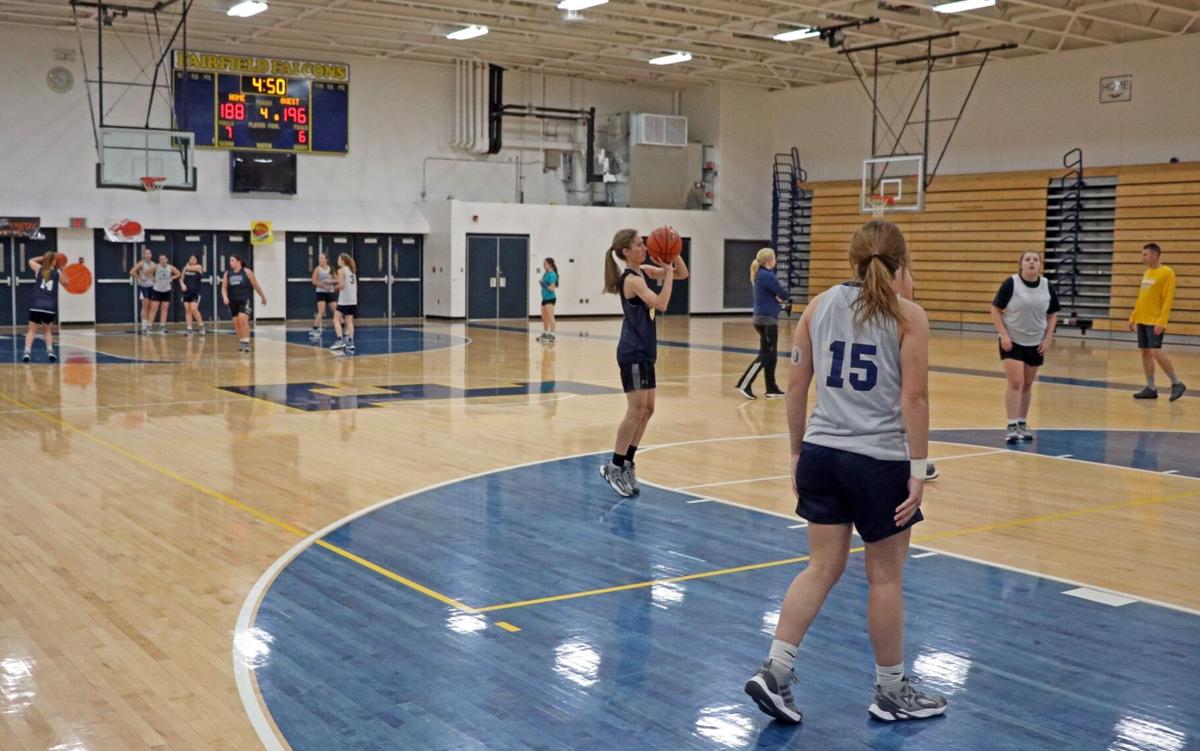 Members of the Fairfield girls basketball team work through a drill on opposite ends of the court during practice Tuesday at Fairfield High School in Benton.

Fairfield senior Brooke Sanchez, center, goes up for a shot during practice Tuesday at Fairfield High School in Benton. The Falcons are off to a 9-0 start this season, the best in program history.

Members of the Fairfield girls basketball team work through a drill on opposite ends of the court during practice Tuesday at Fairfield High School in Benton.

GOSHEN — Four years ago, the Fairfield girls basketball team had its most successful season in program history, winning Class 3A sectional and regional titles before losing in the semistate championship game to Northwestern.

The Falcons finished the campaign with a 24-3 record, winning the regular season Northeast Corner Conference championship along the way as well.

That Fairfield team started the season 7-0. This year’s team is off to an even better start, however, and it has created a buzz around the program similar to the ones of that 2017-18 season.

The 2021-22 Fairfield team is currently 9-0, which is the best start to a season in program history. They’re also 3-0 in the NECC, picking up conference victories over Churubusco, Angola and Prairie Heights. The Falcons are winning by an average margin of 27.5 points a game, with its closest wins being by eight points over Goshen and Prairie Heights, respectively.

All of this success has led to Fairfield being ranked No. 2 in the Class 2A polls this week by the Indiana Coaches of Girls Sports Association (ICGSA), putting the target firmly on the back of the Falcons as it enters the middle part of the season.

“I’ll probably sit down and think about this more in March,” said Fairfield coach Brodie Garber when asked what the start to the season has meant to him personally. “I’m very much a week-by-week guy. I would be lying if I said I don’t see it and I don’t hear it, but it’s just something that I’ll have to reflect on. … Really, for me, it’s about the kids and them having that enjoyment. At some point, when I get a lot older, I’ll look back and think, ‘That was pretty neat stuff.’”

HOW THEY’VE GOT HERE

A lot of the talent returning from a sectional-winning team created high expectations in Benton for this season’s Falcons. There was a moment in the summer, though, where junior Bailey Willard realized just how much potential this team has to achieve big things this year.

“We beat Warsaw in a summer league tournament, and that was just really exciting because we’ve never really beat them before,” Willard said. “Coming into the season, I knew it would be a lot of fun. It’s just a lot of fun right now, doing so well.”

Fairfield started its season with three wins by 20-plus points before grinding out a 46-38 win over Goshen. Big wins over Churubusco, LaPorte and Concord followed to tie the best start in program history of 7-0 with the 2017-18 team.

This past week saw the Falcons play two tough NECC games which showed the mettle this year’s team has. They picked up a road win over Angola, 56-47, last Tuesday and a home victory over Prairie Heights, 38-30, this past Saturday in two games that were close throughout.

As the wins have continued to pile up, senior Brooke Sanchez has noticed a different buzz around the team.

“Leaving a big impression on the community and the rival schools is really exciting,” Sanchez said. “Usually, girls sports don’t get much recognition, so it is kind of fun having the boys basketball team or people who usually don’t come out for girls sports in the stands and having a packed gym. It’s really fun to play in that environment.”

The play of Willard, Sanchez and junior Brea Garber have led the Falcons to this historic start. All three are in their third seasons as full-time varsity starters, and that experience is paying off.

It isn’t just those three that are playing well, though, as junior Morgan Gawthrop and sophomore Kaylee Dillon have stepped into starting roles this season and thrived. Both are averaging more than six points per game, which has helped Fairfield average 54.9 points as a team during its nine-game unbeaten streak to start the season.

“When kids understand their roles and how it affects the team, good and bad, then you have some good things going,” Brodie Garber said.

Having played together since they were kids is a reason for the success of the team so far as well, in Sanchez’s eyes.

“This year, we just read each other so well on the court,” Sanchez said. “We’ve been playing with each other for so long that it’s like we know what each other’s next move is on the court, and that’s a key to having a good team.”

While the Falcons have picked up some impressive wins, their schedule starts becoming tougher starting this Friday against a Lakeland team that has won three-straight games following a 2-5 start.

After a game against Fremont (3-7) this upcoming Tuesday, the schedule really gets interesting for Fairfield when it plays two Class 4A teams in three days on the road. First, they make a short trek to Middlebury to face Northridge (7-2) next Thursday, Dec. 16, who’s only two losses have come to No. 2 (4A) Crown Point and No. 5 (4A) Homestead. Fairfield then has a short turnaround before playing Fort Wayne Snider (6-2) on Saturday in The Summit City.

They then play a struggling NorthWood team (2-8) on Dec. 21 before a two-week layoff for the holidays. The first game out of the break is a tough one, however, as they travel to No. 4 (Class 3A) Garrett in a game that figures to have major NECC title ramifications.

The Falcons’ undefeated record will be seriously tested in the next four weeks. Willard knows that it’ll be important to focus on each game one at a time and try not to look back or ahead to any other games during this stretch.

“In the beginning, we weren’t playing super tough teams,” Willard said. “Right now, we’re starting to get into our season I feel like. We all just push each other here at practice, so I know that’s just going to help us all. We just have to put each game behind us and just keep on going.”