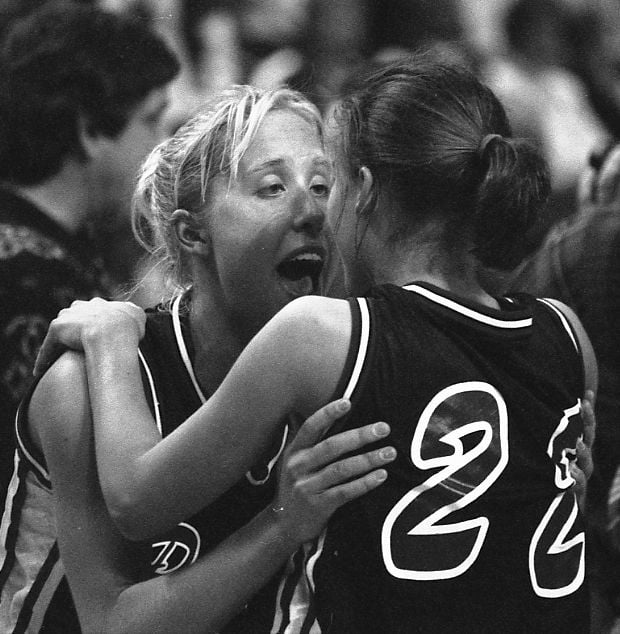 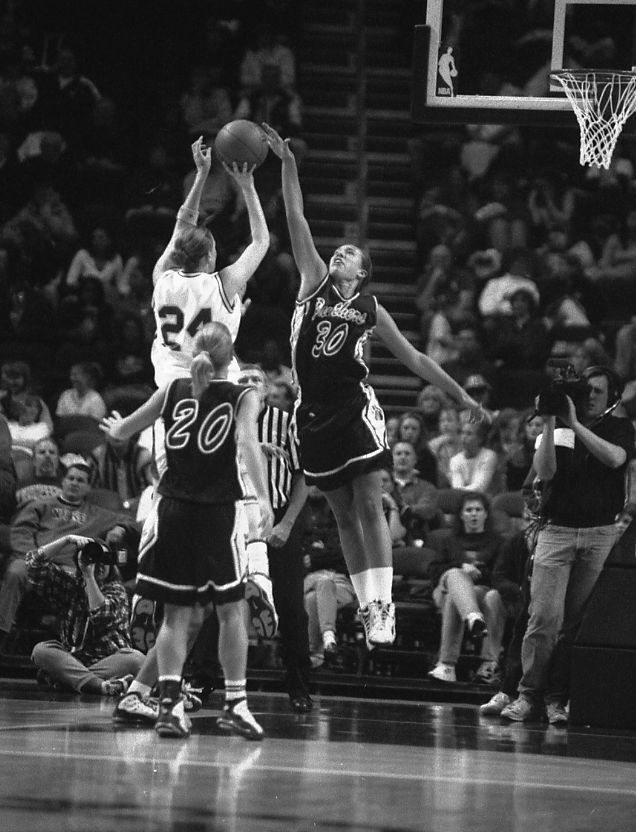 NorthWood senior Natalie Will (30) blocks a shot by Indianapolis Cathedral senior Beth Roederer during the IHSAA Class 3A girls state basketball championship in this March 13, 1999, file photo. NorthWood was a 72-71 winner at Market Square Arena in Indianapolis. Looking on is NorthWood sophomore (20) Kasey Chamberlin. 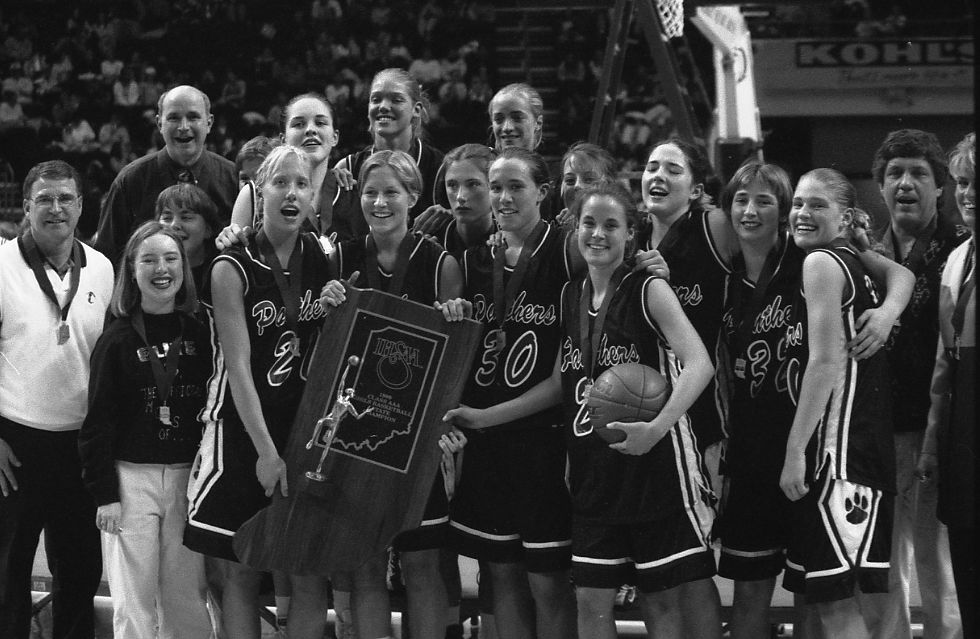 The NorthWood High School girls basketball team poses with the Class 3A state championship trophy after the Black Swish defeated Indianapolis Cathedral, 72-71, in this March 13, 1999, file photo from Market Square Arena in Indianapolis.

NorthWood senior Natalie Will (30) blocks a shot by Indianapolis Cathedral senior Beth Roederer during the IHSAA Class 3A girls state basketball championship in this March 13, 1999, file photo. NorthWood was a 72-71 winner at Market Square Arena in Indianapolis. Looking on is NorthWood sophomore (20) Kasey Chamberlin.

The NorthWood High School girls basketball team poses with the Class 3A state championship trophy after the Black Swish defeated Indianapolis Cathedral, 72-71, in this March 13, 1999, file photo from Market Square Arena in Indianapolis.

NAPPANEE — Adam Yoder has always had a good winning percentage during his tenure as the coach of the NorthWood High School girls basketball team.

But one thing had eluded the sixth-year coach: success in the postseason. All that changed in a big way this season as Yoder and the Black Swish find themselves one win shy of the program’s second state championship.

NorthWood (27-3) squares off with the Salem Lions (25-3) in the IHSAA Class 3A state championship at 6 p.m. Saturday at Bankers Life Fieldhouse in Indianapolis.

He has enjoyed the postseason in girls golf at NorthWood, including a sixth-place finish in last fall’s state finals.

The 1998 Bremen High School graduate experienced some postseason success in his own athletic career. He was a freshman member of Bremen’s 1994 2A state football championship squad and a sophomore on the school’s 1995 team that was the 2A state runner-up.

Yoder graduated from Bremen in 1998 and from Indiana University South Bend in 2003.

Coaching is in Yoder’s family tree, as he is the nephew of Steve Yoder, who joined the Indiana Basketball Hall of Fame as part of the 2020 class.

He went on to be the head coach at Ball State, winning 77 games, two Mid-American Conference championships and a MAC tournament title. The Cardinals made an appearance in the 1981 NCAA Tournament.

From 1982-1992, he was the head coach at the University of Wisconsin, accumulating 128 wins and leading the Badgers to their first postseason appearances in over 40 years with 1989 and 1991 National Invitational Tournament berths.

Saturday will be NorthWood’s third appearances in the girls basketball state finals. The others were under the guidance of Indiana Hall of Fame coach Steve Neff, the long-time mastermind of the NW program.

Neff posted an impressive record of 653-181 in his 37 seasons at the school. His Black Swish teams won 23 sectionals, 10 regionals, two semistates and the 1999 Class 3A state title.

NorthWood made its first Final Four appearance in 1997, the last season of single-class basketball in Indiana.

The team posted an 18-0 record in the regular season. The Black Swish topped Bremen 84-16, Wawasee 42-32 and Fairfield 59-27 to win the sectional at The Panther Pit in Nappanee. NorthWood defeated Penn 46-35 and Plymouth 38-28 to win the Elkhart Central regional before downing Columbia City 53-30 and Kokomo 51-46 for the semistate crown at the Allen County War Memorial Coliseum in Fort Wayne.

NorthWood was matched against the Crown Point Bulldogs in a state semifinal at Market Square Arena in Indianapolis.

Crown Point handed NorthWood a 58-42 loss to end the remarkable season for the Black Swish.

Crown Point went on to drop a 66-52 decision to Martinsville in the championship.

When the Black Swish returned to the finals in 1999, NorthWood brought home the state title in a dramatic, nail-biting finish. It was a typical example of “Hoosier Hysteria.”

Will swished the first of two free throws with 5.6 seconds left to seal a 72-71 win over the No. 1-ranked and previously unbeaten Indianapolis Cathedral Fighting Irish.

Will canned two freebies to give the Black Swish a 70-69 lead with :50 remaining. Sophomore Casey Chamberlin extended the NorthWood lead to 71-69 with the second of two tosses from the charity stripe before Cathedral’s sophomore guard Asjah Zinnerman nailed a running jumper down the middle of the lane to knot the score 71-71 setting up Will’s game-winner at the stripe.

Cathedral had one last chance after Will’s freebie as Zinnerman drove the lane with another running jumper down the lane. This time the ball bounced off the rim, and the Black Swish had their state title.

“It was the longest 4.4 seconds I’ve ever sat through. The girl (Asjah Zimmerman) got off a great shot after three dribbles. It was in and out but what can you say,” Neff said about the end of the contest. “What a great conclusion to a great game. I did not want to let the (taller) girl (Jennifer Callier) get it in the middle and we wanted to force the inbounds pass away from the basket. I congratulate Cathedral on a great year.”

“I’ve never felt so much heartache and joy in one moment. I was on the other end a few years ago (1997) and I did not want to go back there,” Zercher said. “You can’t describe it (the championship). It’s what you dream about and it’s truly a dream come true.”

It was the first team state title in NorthWood history and the first state championship by an Elkhart County basketball team in either boys or girls play.

Since the 1999 title, NorthWood has won a 3A football title in 2005 and Jimtown became the first Elkhart County boys basketball team to win state, taking the 2A crown in 2004.

Will tossed in a game-high 24 points for the Black Swish against the Fighting Irish. Zercher chipped in with 17, Chamberlin 13, freshman Carol Duncan 10 and Callander eight. Junior Michelle Stitcher and Newcomer played, but didn’t score.

Zercher and Will were tied for first place academically in the NorthWood senior class of 158 students.

The amount of talent on the floor was incredible as NorthWood had three players go on to compete in women’s basketball at the NCAA D1 level. Will went to Northwestern, Zercher to Ball State and Duncan to Purdue.