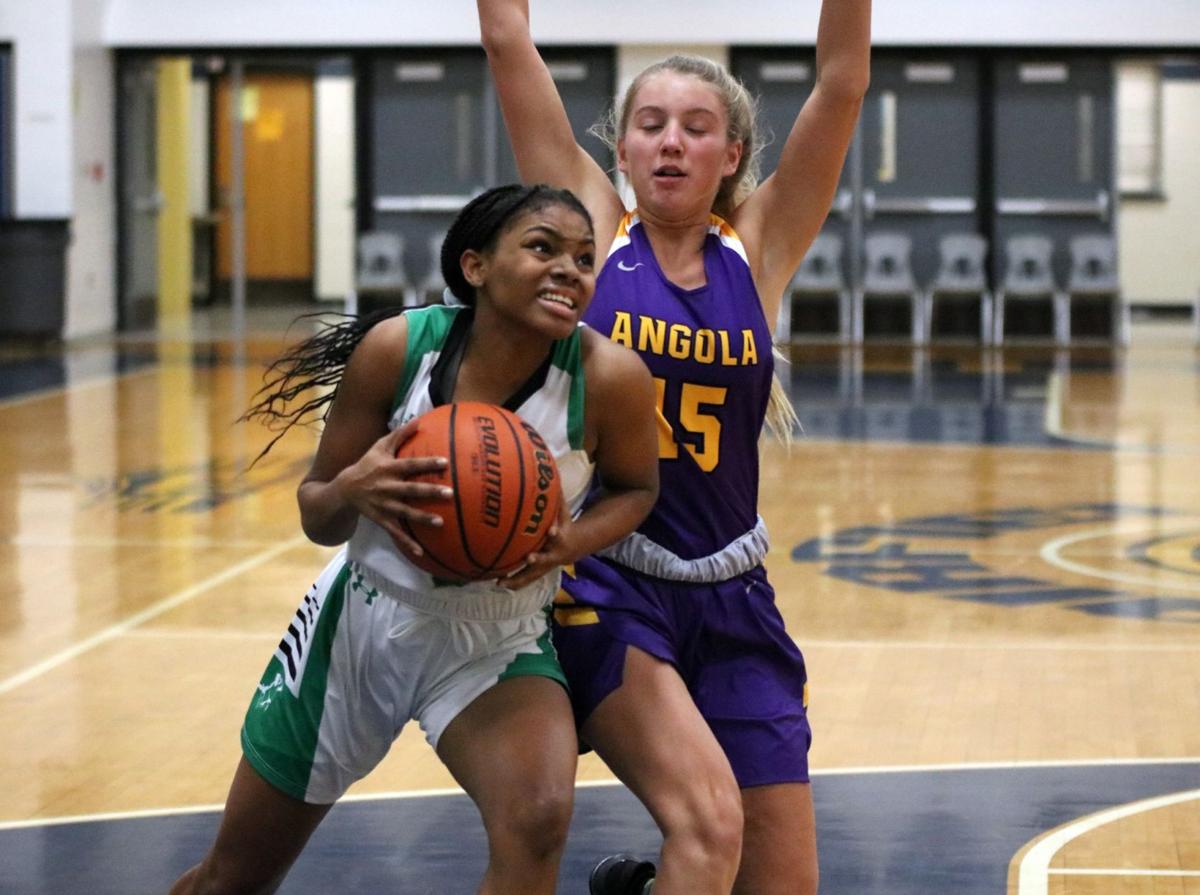 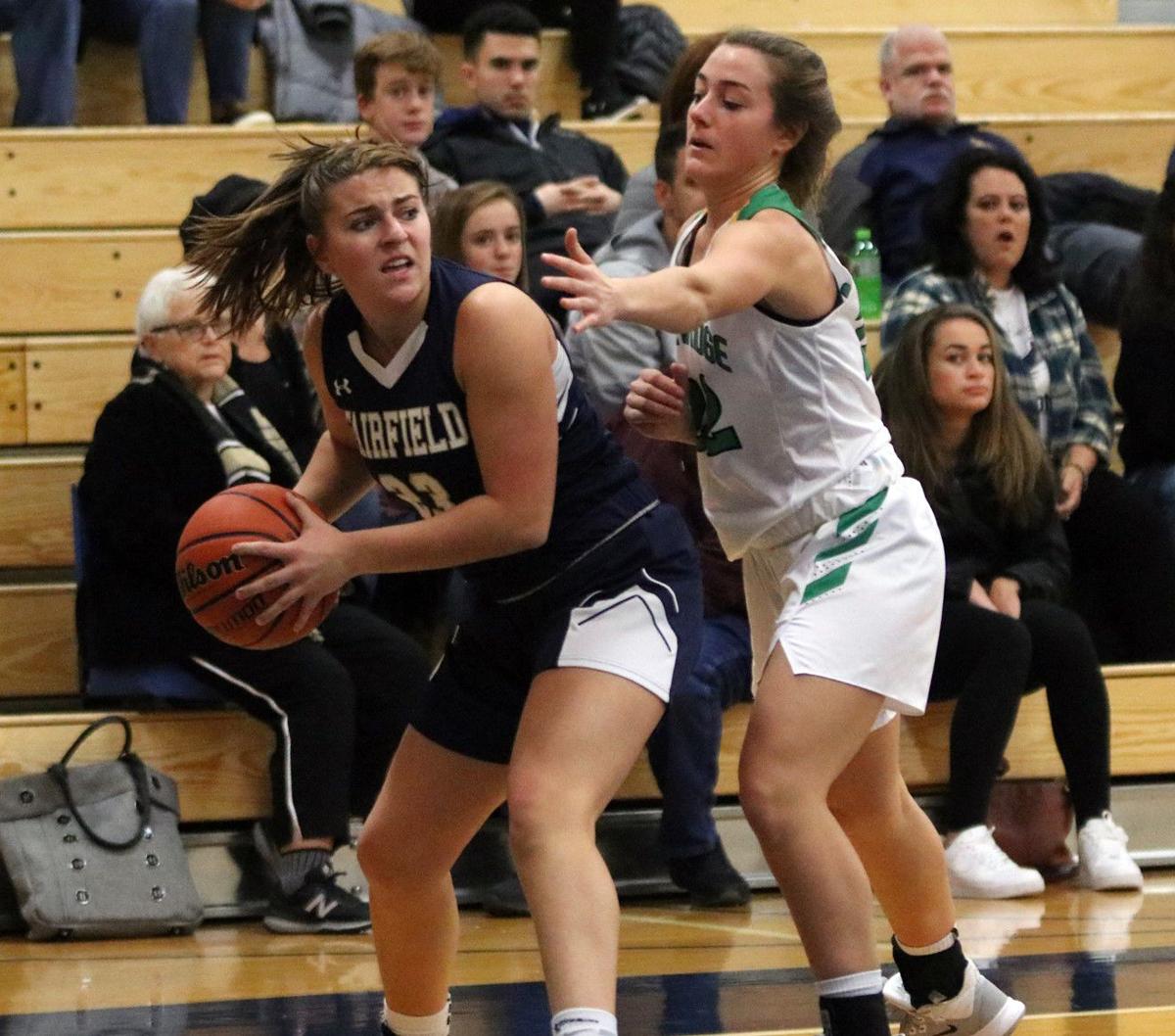 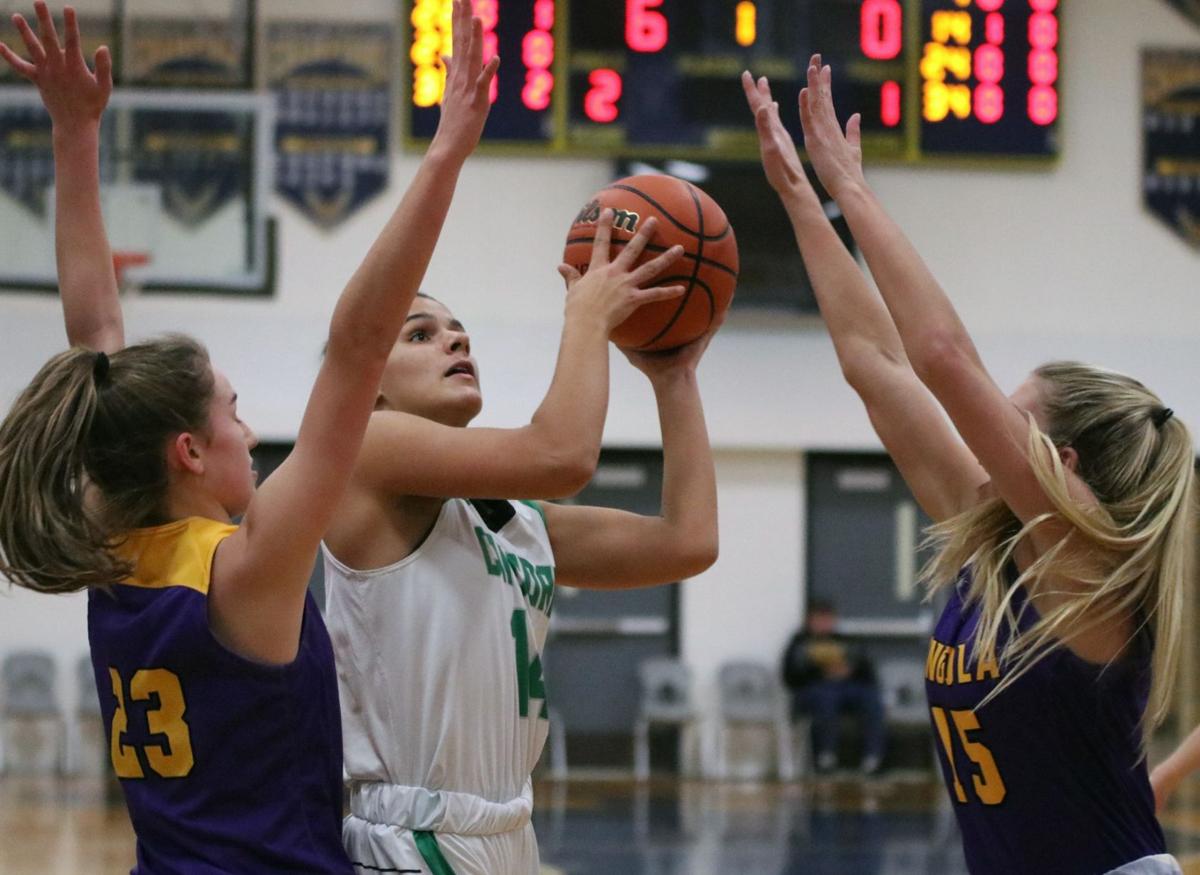 Concord senior Sydney Simon, 14, puts up a shot in between Angola’s Lauren Leach, 23, and Ally Lorentz in the team’s matchup Saturday at Fairfield High School. 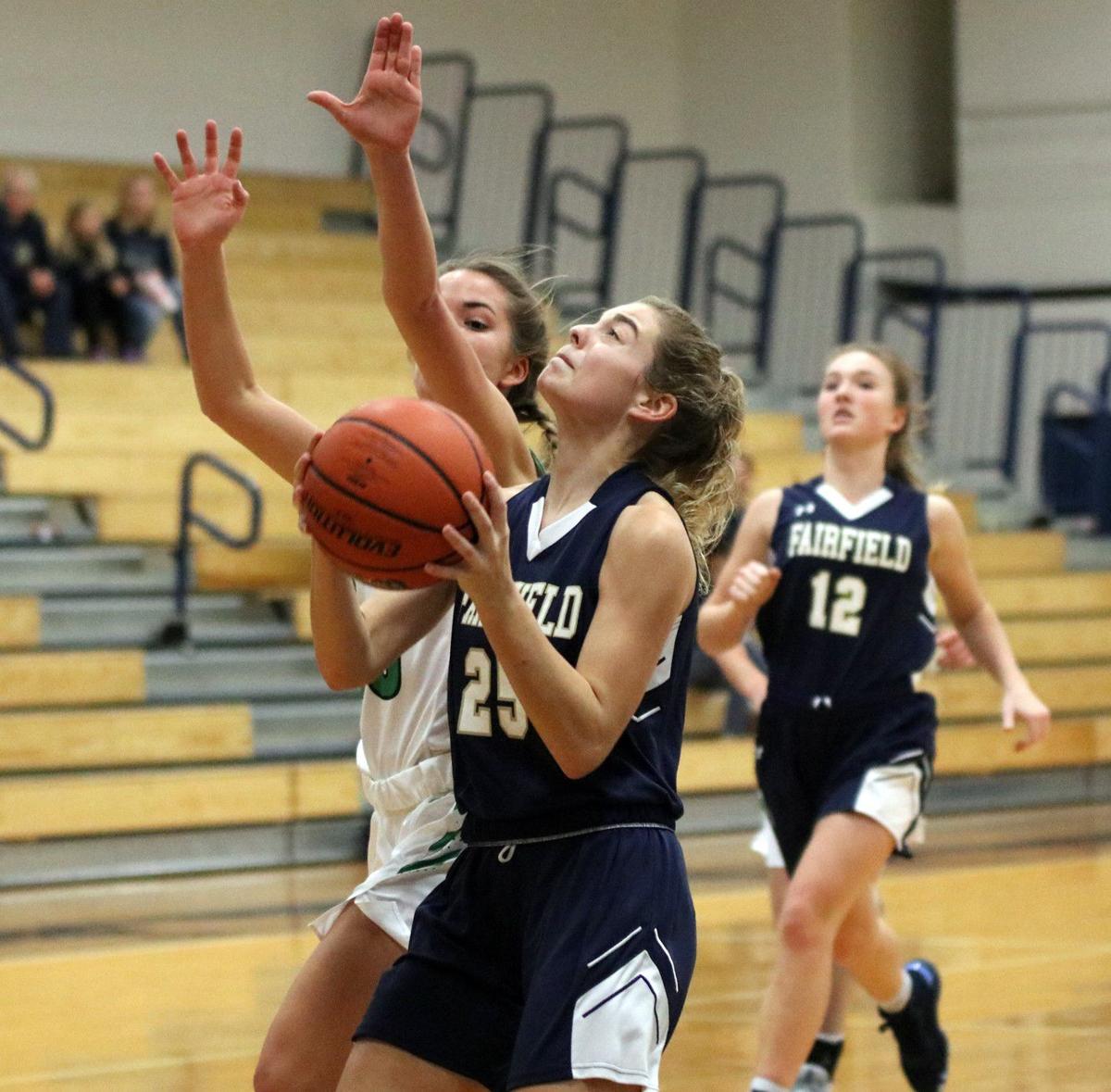 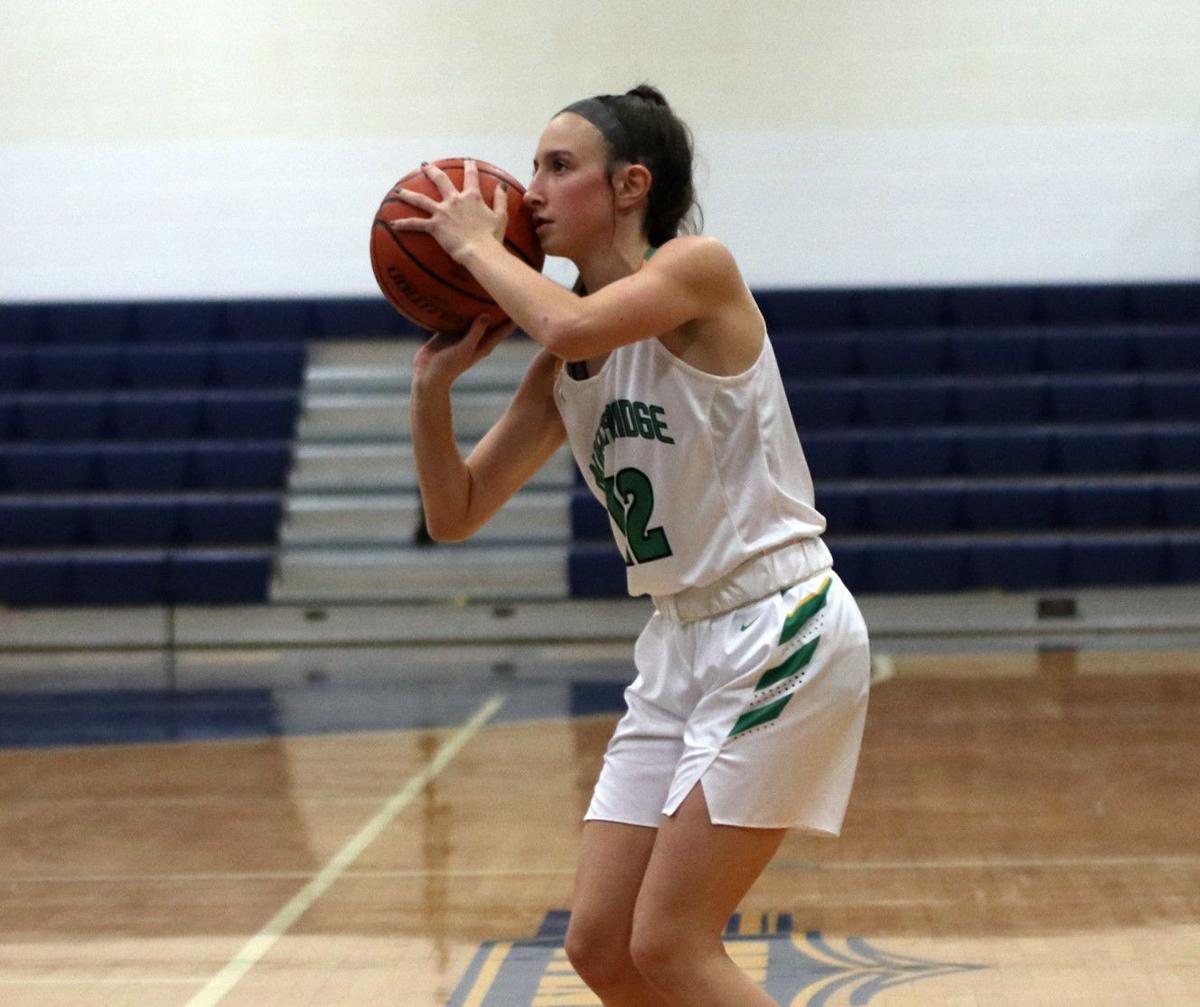 Northridge sophomore Colleen Miller puts up a 3-point shot during the Raiders’ contest against Fairfield Saturday at Fairfield High School.

Concord senior Sydney Simon, 14, puts up a shot in between Angola’s Lauren Leach, 23, and Ally Lorentz in the team’s matchup Saturday at Fairfield High School.

Northridge sophomore Colleen Miller puts up a 3-point shot during the Raiders’ contest against Fairfield Saturday at Fairfield High School.

GOSHEN — When the dust settled at the 2019 NECC-NLC Shootout Saturday at Fairfield High School, it was the NECC’s Angola standing tall. The Hornets defeated the NLC’s Northridge, 50-37, and Concord, 45-37, to go undefeated in the shootout.

“You always feel good when you beat two schools like that,” Angola coach Brandon Appleton said. “Especially with the way Concord has been playing — they’ve been up and coming as the year’s been going on, and Northridge is always well-coached. Proud of the way our girls responded.”

The team’s records following the tournament are Concord 7-1, Angola 5-2, Fairfield 4-3 and Northridge 1-7.

The first game of the day was dominated by turnovers, as Northridge gave the ball up 30 times in the 13-point loss.

“We’re doing things at practice to put them under pressure, and they’ve got to learn,” Northridge coach Doug Springer said. “With this team, they’re so young in terms of experience that they’re succumbing to the pressure.”

Angola led 15-9 after the first quarter and slowly built its lead from there. They led 26-19 at halftime and 35-25 after the third quarter.

It was a dramatic, back-and-forth contest between the Minutemen and Falcons. With less than a minute to go and Fairfield leading 35-34, Concord senior Sydney Simon stole a Falcons’ pass. She then passed it to fellow senior Jadelyn Williams, who then passed it right back to Simon for a layup to give the Minutemen a 36-35 advantage.

After a Fairfield miss and foul, Simon knocked down two free throws to extend the lead to three. Fairfield’s last-second attempts to tie the game were unsuccessful.

“That senior class, they started this journey together with me. It’s exciting to see it come together,” Concord coach Cassie Cepeda said. “They led us to this victory.”

Simon finished a game-high 20 points, while Williams chipped in 10 of her own as well. Alyssa Pfeil had four points, and both Kendal Swartout and Devine Johnson had two points.

Concord suffered its first loss of the season to the Hornets in the first game of the afternoon session at Fairfield. Angola led wire-to-wire, with its lead getting as high as 16 mid-way through the third quarter.

The Hornets started the game strong, going up 10-2 after the first quarter.

“That’s just a credit to these seniors and the group that we’ve got,” Appleton said. “That second quarters, they did their job. We preach a lot about how much it takes on the defensive end, and you hold a team like Concord to 13 points in the first half, you put yourself in a good spot.”

The Minutemen battled back, though, to make it a 12-9 game early in the second period. A 10-0 run from Angola, though, distanced them from Concord. The closest the Minutemen would get it after that is the eight-point difference the final score ended up being.

“They’re a well-coached team,” Cepeda said of Angola. “Basketball is a game of runs. We were pushing, and great teams know how to stop it. Hats off to Angola — they played really well today.”

Knoll had 12 points to lead Angola. Leach had nine, Lorentz eight, Fenstermaker six, and Thompson, Jessica Davis and Janna Fee each had three.

The final game of the afternoon was defined by runs. Fairfield scored seven points in first 86 seconds of the game, forcing Northridge to call timeout. The Raiders countered with their own 10-0 run out of the break, though, before ultimately taking a 10-9 lead after the first period.

Northridge would then take a 22-14 lead into halftime before Fairfield rallied. Trailing 25-17 early in the third, the Falcons went on an 11-2 run to re-take the lead. After a Raiders ‘3’ made it 30-28 Northridge, Fairfield went on another run — this one an 13-0 run that stretched into the fourth quarter — to take a commanding 11-point advantage.

Senior Kara Kitson — who had a game-high 16 points — scored the final five of the run to give the Falcons the lead for good.

Northridge was led by Walker’s nine points. Weaver, Knepp and Kayla Pippenger each had eight, Mantyla six and Miller three.

“This group has to figure out how to play high school basketball and not AAU,” Springer said. “We have a very minimal margin for error with this group due to our lack of size and skill, so we have to play with a ton of energy. And, when our energy is lowered a little bit, teams make runs on us.”

Along with Kitson’s 16 points, Fairfield picked up 10 points from Dell, eight from Sanchez, seven from Stutsman, five from Brea Garber, three from Miller and two from Willard.

“I told them after the game that the 42-year-old, me, probably didn’t handle that (Concord) loss as well as the 16-to-18-year-olds did,” Fairfield coach Brodie Garber said. “To their credit, they were mentally tough and they got through it. The upperclassmen from last year went through some tough fights, and they just want to find whatever kind of way to win. And, that’s what we did.”