Among first acts, Biden to call for 100 days of mask-wearing 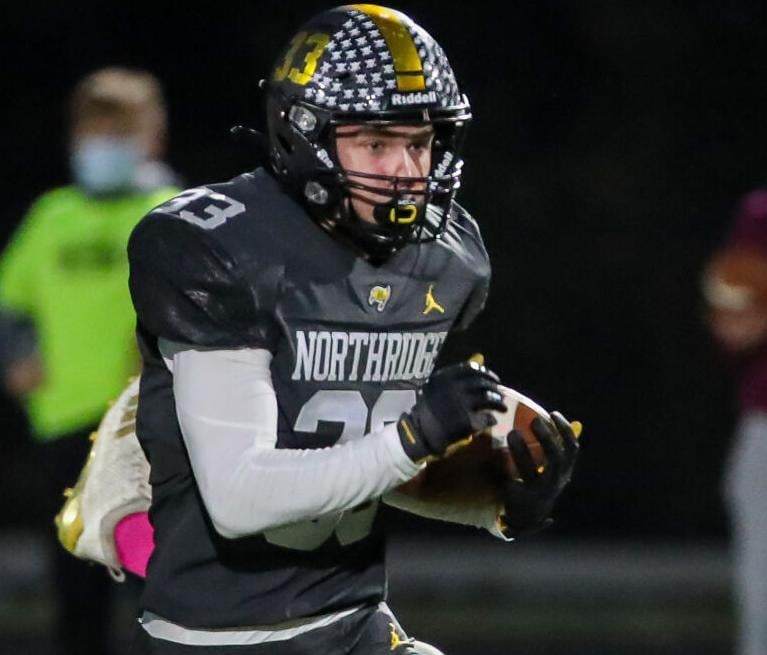 Northridge senior Breckin Judd (33) has a long kickoff return against the Mishawaka Cavemen last week at Interra Field in Middlebury. The No. 12 Raiders host No. 6 Leo in a Class 4A, Sectional 19 quarterfinal game Friday night. 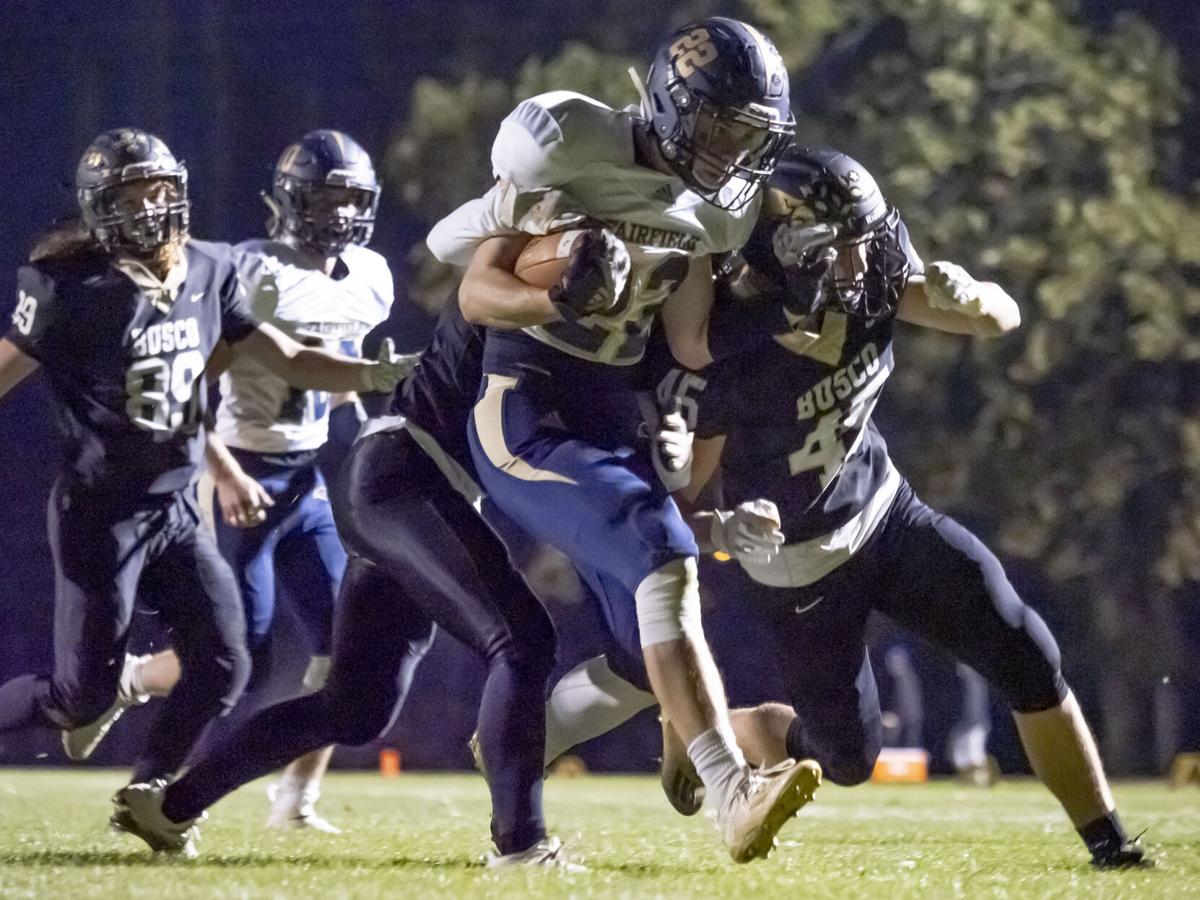 Fairfield halfback Quinn Kitson (22) runs for a touchdown against Churubusco defensive back Nick Nondorf (45) during last week’s game at Churubusco Jr.-Sr. High School in Churubusco. The No. 7 Falcons face Central Noble in a Class 2A, Sectional 35 quarterfinal game Friday night at home in Benton.

Northridge senior Breckin Judd (33) has a long kickoff return against the Mishawaka Cavemen last week at Interra Field in Middlebury. The No. 12 Raiders host No. 6 Leo in a Class 4A, Sectional 19 quarterfinal game Friday night.

Fairfield halfback Quinn Kitson (22) runs for a touchdown against Churubusco defensive back Nick Nondorf (45) during last week’s game at Churubusco Jr.-Sr. High School in Churubusco. The No. 7 Falcons face Central Noble in a Class 2A, Sectional 35 quarterfinal game Friday night at home in Benton.

MIDDLEBURY — The IHSAA football playoffs begin Friday, and a top-12 matchup in Middlebury is expected to be one of the top games in the state as No. 12 Northridge (6-2) welcomes No. 6 Leo (8-1) in a Class 4A, Sectional 19 quarterfinal matchup at Interra Field at Raider Stadium.

For Northridge coach Tom Wogomon, just being able to play in this game is a victory in itself.

“If you would’ve talked about in August about being able to play football, let alone getting a season in and preparing for the first round of sectionals, you just wouldn’t think it’d be possible,” Wogomon said. “Everybody in the whole IHSAA and football community is just glad we’ve made it to sectionals.”

Leo reached the sectional championship game last year and have followed it up with another strong campaign. Wogomon specifically commended the Lions’ defense, as they’ve only allowed 6.9 points-per-game in the regular season and pitched five shutouts.

“Their defense is really what sets the table with this team,” Wogomon said. “They play fast and furious. They don’t do a whole lot of crazy schemes on their defense, but boy, they sure do fly.”

The Raider defense has also been strong, allowing 13.1 points-per-game. They had three-straight shutouts to start the season and four overall. Seniors Zack Howey and Dominic Crowder are co-leaders on the team with 36 tackles, while junior Trent Jensen leads with seven tackles for loss.

Both teams are run-first teams on offense, so Wogomon said the play of his quarterback, junior Logan Hooley, will be critical for success Friday night. Hooley has thrown for 851 yards and six touchdowns this season while also rushing for 567 yards and seven scores.

“(Hooley) has just been getting better and better each week with reading defenses,” Wogomon said. “What we’ve got to be able to do, offensively … we’ve got to capitalize when we have those possessions where we get into deep possessions. We have to make sure we’re walking away with points on the board.”

No. 7 Fairfield finished off their first undefeated regular season since 2008 last week with a 24-6 victory over Churubusco. The 8-0 Falcons now get ready to take on Central Noble (4-5) in the Class 2A, Sectional 35 quarterfinal Friday night in Benton.

The two teams met Sept. 4 in Albion, with Fairfield winning 32-6. It was a 14-6 game at halftime, but the Falcons shutout Central Noble in the second half, 18-0, to leave with a convincing victory. Falcon senior quarterback Cory Lantz rushed for 103 yards and two touchdowns and threw for another in the victory.

Fairfield coach Matt Thacker said preparation this week has been more focused on recent games than the one from seven weeks ago.

“You go back and watch that film, but that was a long time ago,” Thacker said. “The regular season’s over; now we’re onto a new season and everyone starts out 0-0. We’ve told the guys that Central Noble is going to come out ready to play.”

Thacker said Cougar junior Will Hoover will be someone the Falcons will have to contain in order to get a second win over Central Noble. Hoover has rushed for 692 yards and eight touchdowns this season and also leads the defense with 113 tackles.

“He runs hard; very physical runner,” said Thacker of Hoover. “He’s pretty much the heart and soul of their team. He comes downhill awfully hard and fills awfully hard on defense.”

The Falcons have the sixth-highest average margin of victory in Class 2A, winning games by more than 30 points-per-game. They allowed the third fewest at 7.75 points-per-game and score the eighth most at 38.13.

Fairfield played for a sectional championship last year and have most of the players back from that team. Thacker hopes that experience will help this group win a sectional title for the first time since 2009.

“Practice has been like usual; pretty business-like,” Thacker said. “They’ve been able to get everything done and everything in, so that’s as a positive. As long as we can continue to do that and continue to keep working toward what we want to get to, then I think we’re on the right track.”

The Lakeland-Marian and West Noble-John Glenn matchups are rematches from last season's sectional openers. Last year, Marian beat Lakeland, 60-0, while West Noble knocked off John Glenn, 26-0. Marian is the defending sectional champion and reached the semistate game a season ago.

While classes 1-4A begin the postseason Friday, those in Class 5A and 6A are mostly off. No 6A teams are playing and there’s only one 5A game, featuring Terre Haute North and Decatur Central.

NOTE: Teams in Class 5A (Goshen, Concord) and Class 6A (Elkhart) have byes this week.