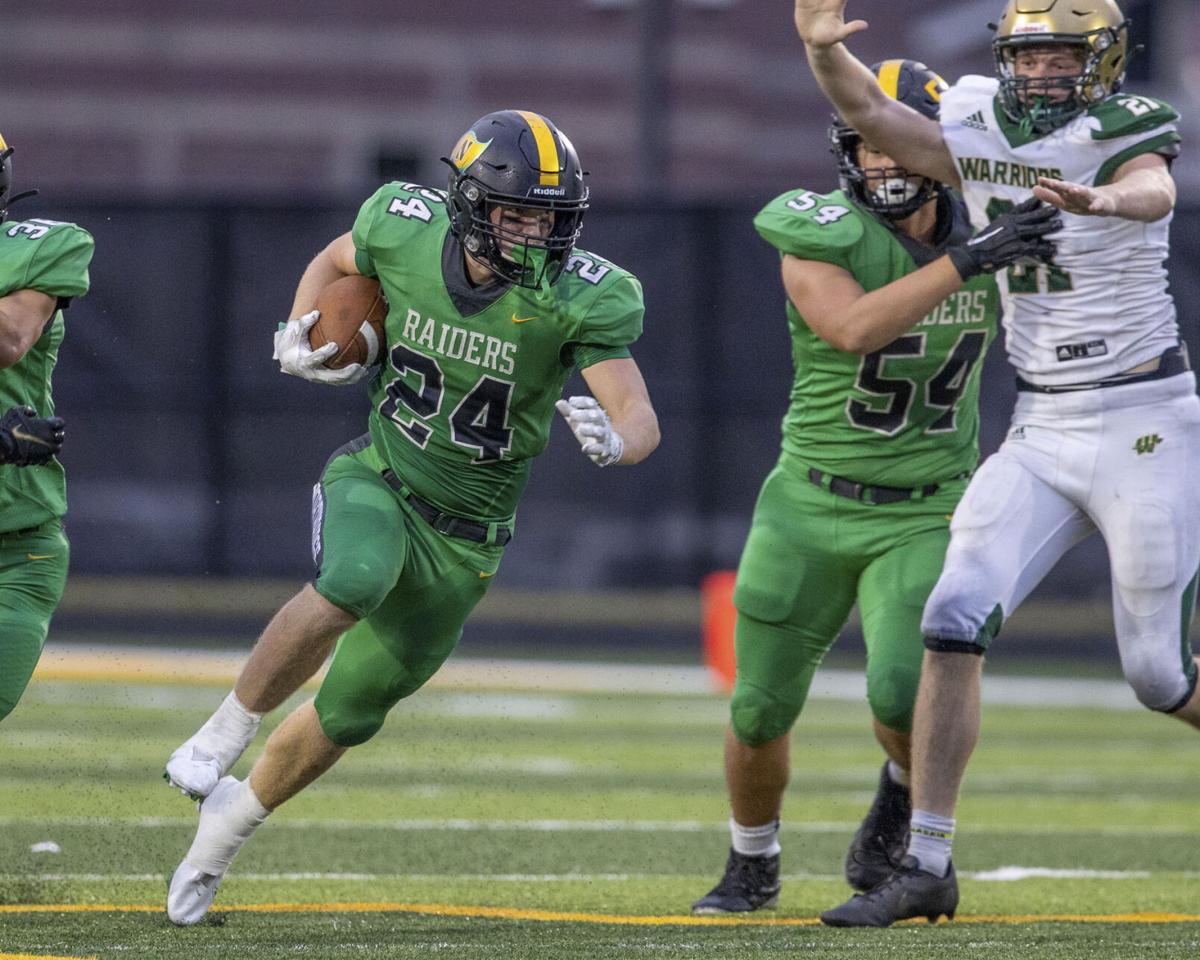 Northridge junior Tagg Gott (24) runs through a gaping hole in the game against Wawasee on Sept. 3 at Northridge High School in Middlebury. Northridge heads to Warsaw Friday in a game that has major implications in the NLC championship race. 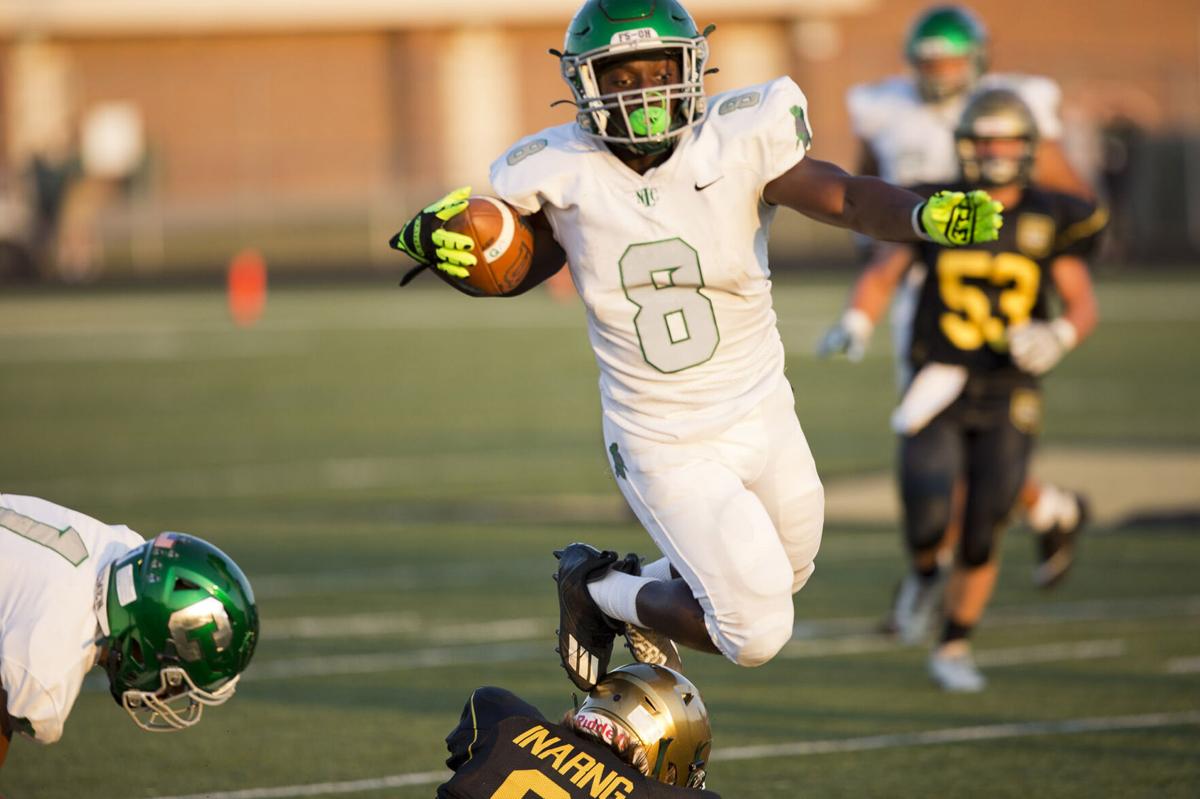 Concord running back Titus Hackworth leaps over a Wawasee defender during the game last Friday in Syracuse. Concord visits Goshen Friday in an NLC contest.

Northridge junior Tagg Gott (24) runs through a gaping hole in the game against Wawasee on Sept. 3 at Northridge High School in Middlebury. Northridge heads to Warsaw Friday in a game that has major implications in the NLC championship race.

Concord running back Titus Hackworth leaps over a Wawasee defender during the game last Friday in Syracuse. Concord visits Goshen Friday in an NLC contest.

For the second season in a row, the Northridge football team enters its game against Warsaw with an unbeaten record. Last year, Warsaw won 27-14. This time around, the Raiders hope the game goes in their favor.

In a game that will go a long way in determining who’ll be the Northern Lakes Conference champion this year, No. 7 (Class 4A) Northridge (4-0, 2-0 NLC) will travel to Fishers Field to take on the host Tigers (3-1, 2-0 NLC) Friday night. Northridge and Warsaw are two of the three remaining unbeaten teams in NLC play, along with Concord.

“This is huge for us,” said Northridge coach Chad Eppley of Friday’s game against Warsaw. “We basically kind of stated that this is for a conference championship, or at least a share of it. With Warsaw beating Mishawaka last week, this made it an even bigger game for us. We’ve kind of been treating it like a championship week, and guys have been locked in and excited.”

A big storyline to follow in the game will be the health of Northridge quarterback Micah Hochstetler. The dynamic senior was injured in last week’s 35-0 win over Plymouth. While there was some fear over Hochstetler’s status for the Warsaw game, Eppley said it’s more of a day-to-day issue for the senior.

“(Hochstetler) practiced a little bit (Tuesday); we were kind of just trying to ease him back into this and not hurt him anymore,” Eppley said. “Kind of after (Wednesday) and (Thursday), we’ll be able to tell a little bit more. As of right now, it’s still up in the air.”

Eppley said the key to victory against the Tigers will be containing their triple-option rushing attack.

This will be the 35th time Northridge and Warsaw have met on the gridiron, with the Tigers holding a decisive 25-9 series lead. The last time the Raiders beat Warsaw was in 2017, a year that saw Northridge go undefeated in the regular season and win the NLC title.

“It’d be huge, especially for our program,” said Eppley on what a win Friday would mean. “Some of these kids have never beat Warsaw, so if we beat them, then that kind of gives them some confidence and shows them that we can do some things that people say that we can’t do.”

The other unbeaten team in NLC play, Concord, will be at Foreman Field Friday to take on the Goshen RedHawks. The Minutemen are coming off an impressive 44-0 win over Wawasee, one where coach Craig Koehler thought his team cleaned up many of the mistakes that plagued them in the first three games of the year.

“We certainly played cleaner football,” said Koehler of his team’s performance against Wawasee. “We’re still a work in progress, but we certainly took steps in the right direction regarding that. … the self-inflicted stuff certainly improved. We executed better on both sides.”

Meanwhile, Goshen is coming off a tough 17-7 loss to NorthWood in Nappanee. After the game, RedHawks coach Kyle Park talked about having to change some things to get his team better prepared for games. While the coach wouldn’t mention specifically what he changed this week, he did say changes were made with how they’ve been practicing.

“It’s emphasizing different things that maybe we haven’t emphasized enough in practice; things that are in my control,” Park said. “That’s probably the biggest thing.”

Goshen’s defense has been playing at a high level this season, allowing just 15.8 points-per-game through four contests. Koehler knows it’s going to be a tough task scoring against a stronger RedHawks defense than in years past.

“Their talent level on that side of the ball is, I believe, vastly improved,” Koehler said. “They always play hard and they’re well-coached, so those are the things that jump out immediately when you turn on the film, in regards to their defense.”

Park complimented Concord’s defense, mentioning the numerous athletes they possess on that side of the ball. He also knows the high-powered Minutemen offense will be a challenge to slow down, so controlling the time of possession and winning the turnover battle are some keys to victory for the coach.

“I think turnovers will be key with field position,” Park said. “We had some inopportune turnovers, offensively, (against NorthWood), after some defensive stops and driving the ball. We’re going to have to take care of the ball better and have to generate some turnovers.”

OTHER GAMES TO WATCH

—History could be made at Andrews Field Friday, as NorthWood football coach Nate Andrews can win his 100th career game. Andrews is 99-64 overall in 15 seasons, including 59-25 in seven-plus years coaching the Panthers. NorthWood (2-2, 1-1 NLC) will play host to Wawasee (0-4, 0-2 NLC), a team that the Panthers have beaten eight consecutive times (including the postseason).

—Fairfield will finally begin the conference portion of its schedule when they host West Noble Friday in a Northeast Corner Conference Big Division contest. The Falcons went 4-0 in the Big Division last year as part of an 8-0 regular season. Fairfield enters this week’s game with a 1-3 record following a 51-12 victory over Fremont last week. West Noble is also 1-3, but 0-1 in the Big Division after losing to Angola, 38-13, last Friday.

FULL LIST OF AREA GAMES THIS WEEK — All kickoff at 7 p.m.