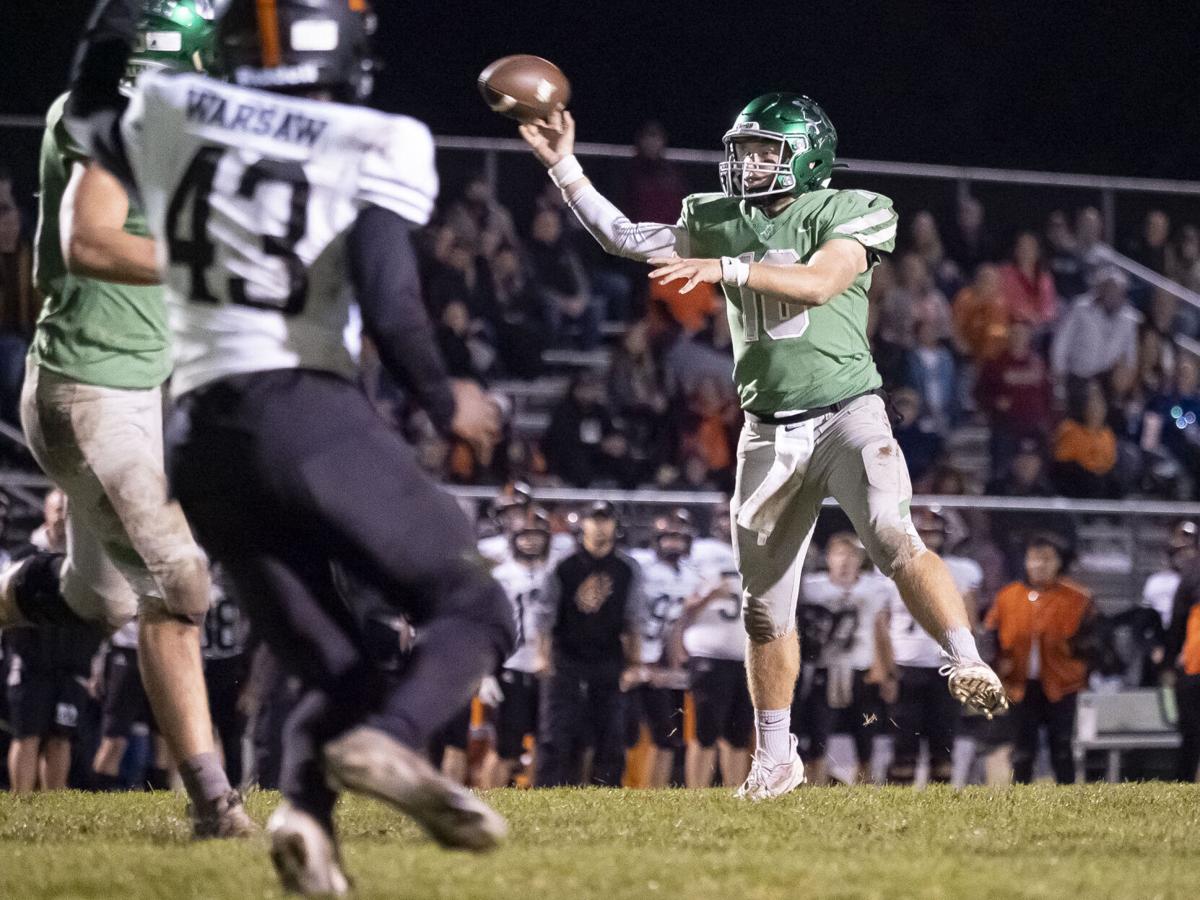 Concord senior quarterback Hunter Dutton throws toward the end zone during an NLC matchup against Warsaw on Oct. 15 in Elkhart. 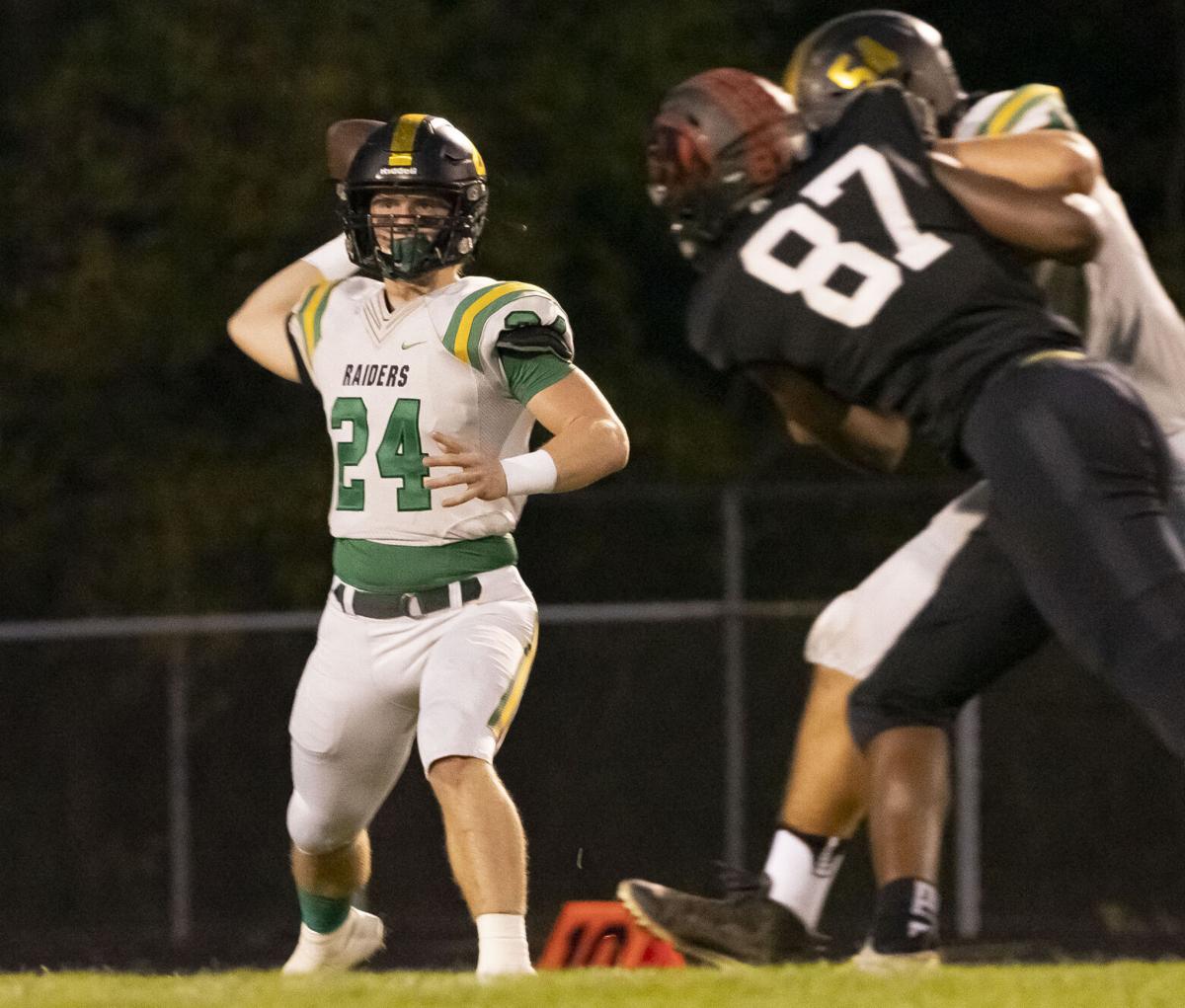 Northridge junior quarterback Tagg Gott winds up for a pass during a sectional quarterfinal game against NorthWood last Friday in Nappanee.

Concord senior quarterback Hunter Dutton throws toward the end zone during an NLC matchup against Warsaw on Oct. 15 in Elkhart.

Northridge junior quarterback Tagg Gott winds up for a pass during a sectional quarterfinal game against NorthWood last Friday in Nappanee.

Concord will host Mishawaka in a battle of top-10 teams in Class 5A, while Northridge returns home after a victory over NorthWood to take on Columbia City in a Class 4A, Sectional 19 semifinal contest.

A little over a month ago, Concord beat Northern Lakes Conference foe Mishawaka by two touchdowns at Jake Field during week six of the regular season.

This Friday, the two teams will meet again, but this time, a berth in the sectional title game is at stake.

The Minutemen (9-1) will host the Cavemen (7-2) at Concord High School on what is expected to be a chilly and potentially rainy night. While the NLC champions handled Mishawaka in the first meeting, the second one figures to be a much tighter contest with Cavemen starting quarterback Justin Fisher back from injury.

Additionally, the Cavemen have had an extra week to both rest and prepare for Friday’s sectional semifinal after drawing a bye, while Concord suited up and took care of business against LaPorte, 38-13, in the sectional quarterfinals.

“What can you do?” said Concord head coach Craig Koehler of defending Fisher. “If only we could put 12 or 13 players out there. I guess that’d be advantageous. But in reality, there’s no magic potions. We just have to line up and do our job.

“Obviously (Justin Fisher) is a different animal, especially in terms of getting him on the ground. He’s 6’2”, 220 pounds, and that’s the challenge. Very seldom does he go backwards when he’s tackled. That’s the difference when he’s in the game. … We have to win some first downs as well, because it can’t be 2nd and 6 all night.”

While sound tackling will be essential for Concord, turnovers may be the difference between a win and a loss as well. Defensively, the Minutemen forced five turnovers combined against Mishawaka and Warsaw during the regular season. Offensively, Concord only surrendered two during those games.

Not allowing Mishawaka extra possessions will be one of the biggest keys for Koehler’s group if it hopes to advance to next week’s sectional title game against either Michigan City (6-3) or South Bend Adams (4-6).

“We have to force turnovers,” Koehler said. “I’m not saying that we can’t beat them if we don’t force turnovers, but it makes it very difficult. I can promise you, if you track (Mishawaka)’s data from when they started running this stuff back in 2008, if they had zero or just one turnover, they’re winning 80 to 90% of the time. If the opposing defense doesn’t force turnovers, it’s difficult to beat this team.”

Offensively, Concord quarterback Hunter Dutton played well during the regular season matchup with Mishawaka, tossing for 263 passing yards and four touchdowns with no interceptions. The Minutemen proved to be a tall task for the Cavemen to stop, but now it’ll be up to Concord’s defense to hold one of the better quarterbacks in the state to a pedestrian performance.

“Everything that we’ve heard in our program is that we’re the underdog going into this one,” Koehler said. “They have their all-state quarterback back. Overconfidence with us is certainly not an issue. We beat them the first time, but they didn’t have their guy and now they do. … There aren’t many people outside of our program that believe the Concord Minutemen will beat the Mishawaka Cavemen a second time.”

After avenging its regular season loss to NorthWood during last week’s 28-7 Class 4A Sectional 19 quarterfinal victory, the Northridge Raiders (6-4) will look to advance to the sectional final with a win over Columbia City (5-5) in Middlebury on Friday night.

The Raiders seemed to have figured out their offense after an up-and-down second half of the season with Micah Hochstetler being lost for the year due to an ankle injury after week four.

Converted running back Tagg Gott scored all four touchdowns (three rushing, one passing) at the quarterback position last week against the Panthers. He threw for 232 yards and ran for another 98 during the playoff victory.

“Really, it’s just his athleticism and his knowledge of football,” said Northridge head coach Chad Eppley when asked what made Gott the starter at quarterback. “We know we have a guy in there that we can trust to get where we need to go. If it’s 2nd and 3 or 3rd and 3, it doesn’t matter, we know he’ll get the yards that we need. And with his ability to run the ball, if he gets flushed out of the pocket, he can make something out of nothing.”

After a game where the Raiders truly dominated on both sides of the ball over NorthWood, the confidence of Eppley’s team has rapidly increased, according to the head coach.

“(Tuesday)’s practice was probably one of the best practices we’ve had all year,” Eppley said. “I think the guys are believing in themselves a lot more. They believed they could win last week, but now I feel like they really, really believe in themselves. … We all think we have the potential to do something big.”

The next step toward making something big happen comes against an Eagles team which has also had a very inconsistent season.

Columbia City had a stretch from Sept. 3 to Sept. 17 where its offense scored a combined 162 points during a three-game winning streak. That stretch helped the Eagles start the season with a 4-1 record before losing four in a row and entering the playoffs at 4-5.

Columbia City downed Angola (2-8) 48-12 during the sectional quarterfinals to advance.

“They can throw the ball really well,” said Eppley of Columbia City. “They throw it deep and use their quick wide receivers and their really tall tight end, so we have to make sure we are ready for that coverage-wise. Both lines on both sides of the ball look pretty big, so we’re preparing for that.

“Defensively, their linebacker (Ryan Elsten) looks really strong. He flows to the ball really well and makes some plays. And in the secondary, both of their safeties look really good, so we’ll see what we can do there.”

In spite of a season filled with adversity, a win for the Raiders Friday would advance them to their first sectional final since 2014 against either Leo (10-0) or DeKalb (2-8) next week.

“This game’s going to be huge for our kids,” Eppley said. “This is the first time this senior group has even won a sectional game because of the tough teams we’ve pulled in the past. This senior class has really had a will to win all year, and I think getting to a sectional title for them would be huge, but first we have to beat Columbia City.”