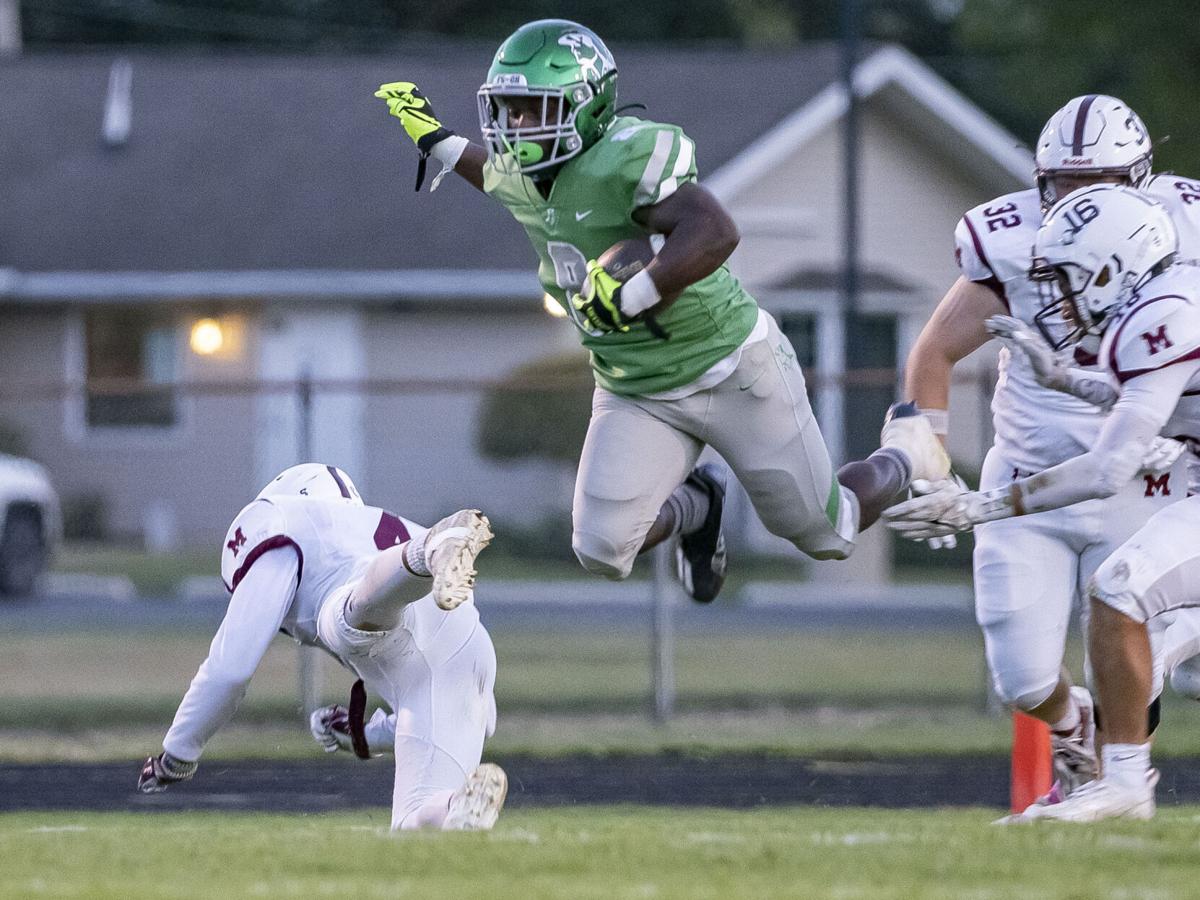 Concord junior Titus Hackworth (8) leaps over Mishawka junior Isaac Valdez (16) to avoid getting tripped up during a game at Concord High School in Dunlap, Sept. 24. 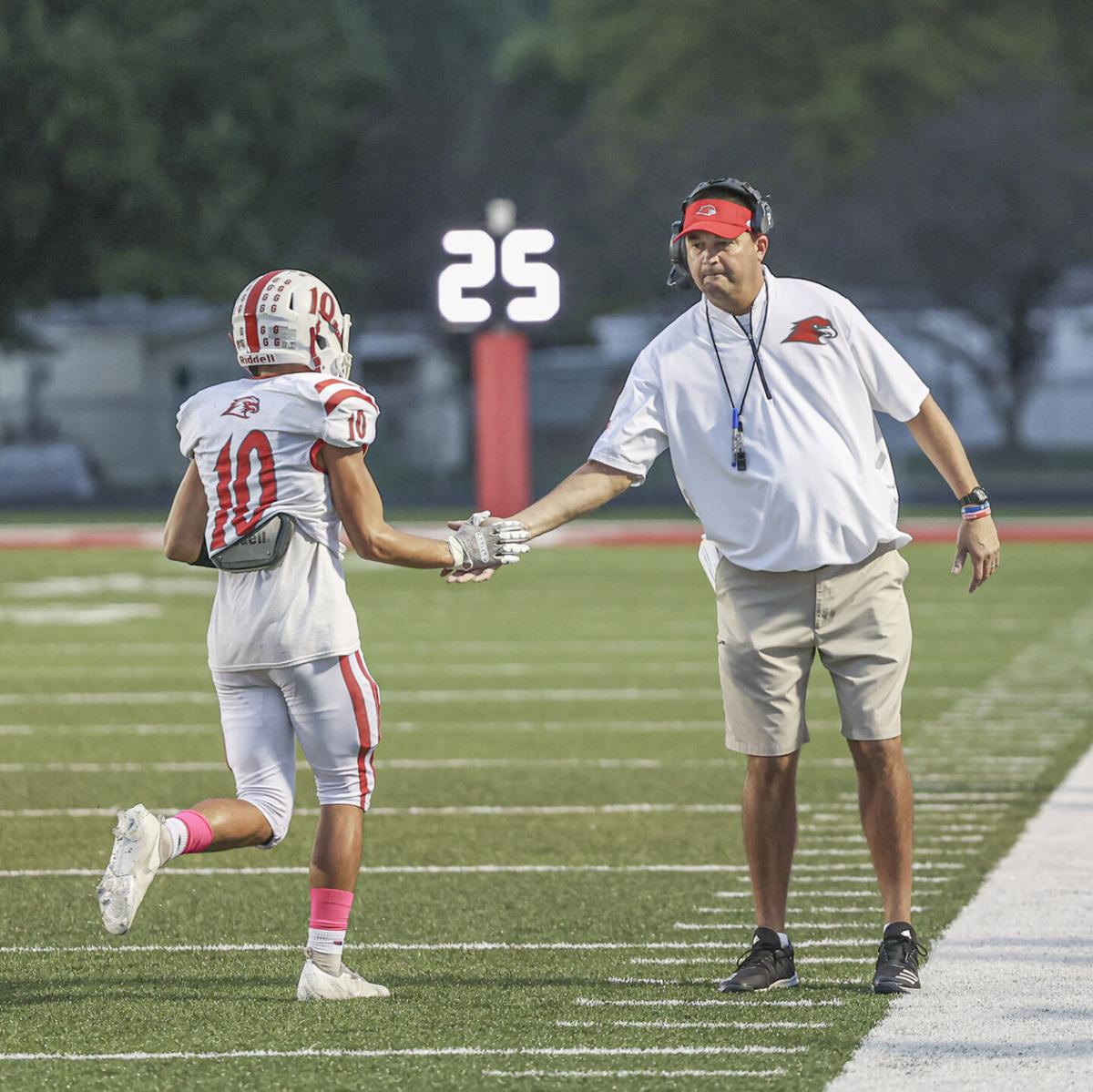 Concord junior Titus Hackworth (8) leaps over Mishawka junior Isaac Valdez (16) to avoid getting tripped up during a game at Concord High School in Dunlap, Sept. 24.

Riding a seven-game winning streak, the Concord Minutemen will look to win their first outright Northern Lakes Conference title since 2015 during the final week of the regular season.

To achieve that goal on Friday night at Jake Field, Concord head coach Craig Koehler and his team will have to take down Warsaw (7-1, 6-0 NLC) and its potent triple option offense.

The Tigers defeated Concord 35-17 last season, but the Minutemen have won 12 of the last 17 meetings, including the last five at home. Offensively, the Tigers can score at will. Warsaw has put up over 40 points five times this season and have outscored opponents 133-31 over the last three weeks.

“Their effort,” said Koehler when asked what jumps out about this Warsaw team. “That’s what always jumps out of (Warsaw head coach Bart Curtis)’s teams. I’ve heard him say you’re what you put on tape multiple times. They block well, they tackle well. They look like a typical Burt Curtis team, and we’re certainly going to have to play our best game to have an opportunity to win.”

There’s no secret Warsaw likes to run the ball down its opponent’s throats and wear them down. They’ve rushed for over 500 yards twice this season and tallied over 300 rushing yards in the win over NorthWood last Friday.

The Minutemen (7-1, 6-0 NLC) are no strangers to the option offense however. In Week 6, they beat Mishawaka and then dominated Plymouth in Week 7.

Having that familiarity with the offense on Concord’s defensive side of the ball has helped immensely in preparation this week at practice.

“We kind of went two weeks straight of defending the triple,” Koehler said. “Just in terms of the language, some of the coaching points and some of the techniques that you have to use to defend this stuff, it's much more familiar than in year’s past. … It is truly a different offense, which in turn means you play very differently on defense.

“Playing those two games against that offense has helped us. And I think Warsaw and Mishawaka have some similarities. Both lines are very good, but I think Warsaw has a kid at halfback (Julius Jones) who is probably one of the more talented players we’ll have defended all year. The quarterback has good speed, and they just have a lot of playmakers.”

An extra factor that may come into play on Friday night is the weather. As of Wednesday night, there’s a 60% chance of rain over in Dunlap for Friday night’s game.

With the Minutemen being a more pass-heavy offense, and the Tigers consistently utilizing hand-offs and pitches offensively, whichever team can avoid the costly turnovers has the best shot of winning.

“We’ll have to perform at a high level,” Koehler said. “Because if we don’t, we probably won’t have a chance to win the game. … The weather doesn’t look great, and that’ll probably play a factor. We’ve got to possess the ball. We can’t give them free possessions. We have to make sure we keep a dry ball out there. But whether it rains or the sun is shining, we’re going to play the game.”

The last time Concord had a shot to win the NLC title outright was in 2017. That year the Minutemen went 10-2 and made a run to regionals, but a seven-point loss to Northridge cost Koehler and his group a conference championship.

“Northridge beat us at our place that year, and it was a difficult pill to swallow,” Koehler said. “But you know, we’ve won this league a bunch in my time here. … And this is a huge opportunity for our program to win another conference championship. It’s really exciting and it’s really important. And our expectation is to get it done. And if we were to not get it done, it’s going to be be very disappointing.”

Last Friday, Goshen did something they hadn’t done in four seasons after downing the Plymouth Rockies 28-14.

For the first time since defeating Elkhart Memorial on Sept. 1, 2017, the RedHawks picked up an NLC victory in what was their first win over Plymouth since the 2016 season.

After struggling through a five-game losing streak, Goshen’s Quinn Bechtel almost single-handedly led his team to victory with 283 total yards through the air and on the ground. Bechtel ran for 186 yards and scored all four touchdowns for the RedHawks in the run game. Something Goshen head coach Kyle Park was happy to see after the team’s recent struggles on offense.

“We took care of some things that had been plaguing us in previous games,” Park said. “We played a little bit better up at Plymouth, and we’re going to have to continue to do that. … Offensively, we have to establish the run. We ran Quinn Bechtel 37 times, but we need to try to get the ball out of his hands and to some other playmakers as well. We weren't as successful running the football the last couple weeks before that, but we think we have some things figured out. We just have to go out and execute.”

While teams have moved the ball proficiently against a Wawasee defense that has given up 37.6 points per game, the Warrior offense has shown signs of life at times, especially in the running game with Cameron Zimmerman and Brandon Kelly.

If Goshen can shutdown Wawasee’s running game, keeping the Warriors out of the end zone becomes a much easier task.

“They’re pretty good up front and have, at times, played at a high level,” Park said. “They beat Plymouth just like we did. … Defensively, we are going to have to tackle well in space like we did against Plymouth. (Wawasee) likes to run the football and depending on who’s at quarterback, they’ll sometimes throw it a little bit more. There’s been some different factors, and they’ve had to deal with injuries like us so I wouldn’t consider them inferior.”

If Goshen wins, it’ll finish the regular season at 4-5. That win total would be the most in a season since 2016 when the RedHawks went 8-3. The current senior class at Goshen has had to weather multiple tumultuous campaigns to get to this point, and they’ll finally be honored on Senior Night at Foreman Field.

“This is a great group of kids,” Park said. “They came in as freshmen with no freshmen team. They took their lumps, and we told them better times were ahead. They were playing up against better competition, and there’s 11 of them that have stuck it out. That’s a testament to them with us not having as much success as we all would’ve liked over the last couple years. I know them persevering has made them better people. It’s great to have a couple more wins, and it’d be great to go out with a Senior Night victory and some momentum heading into the postseason.”

FULL LIST OF AREA GAMES THIS WEEK – All games kickoff at 7 p.m.