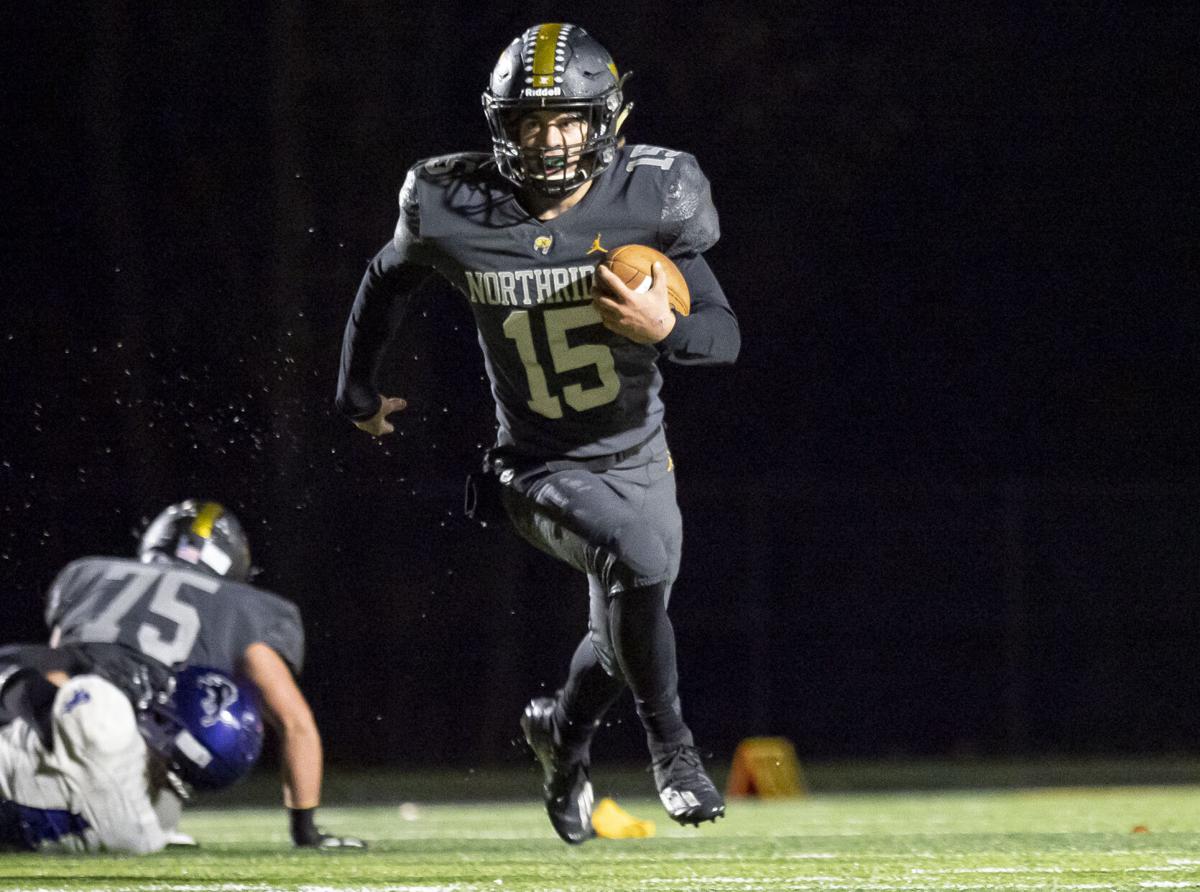 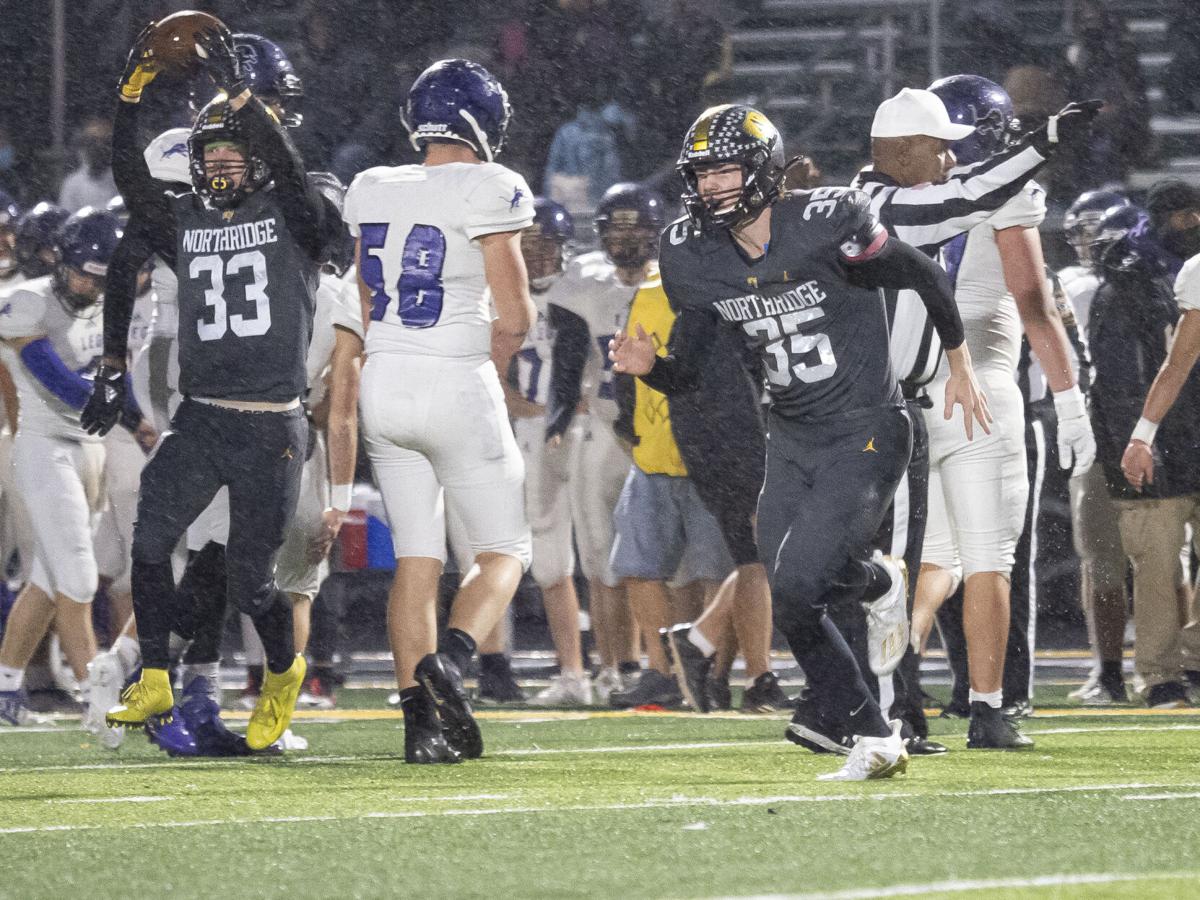 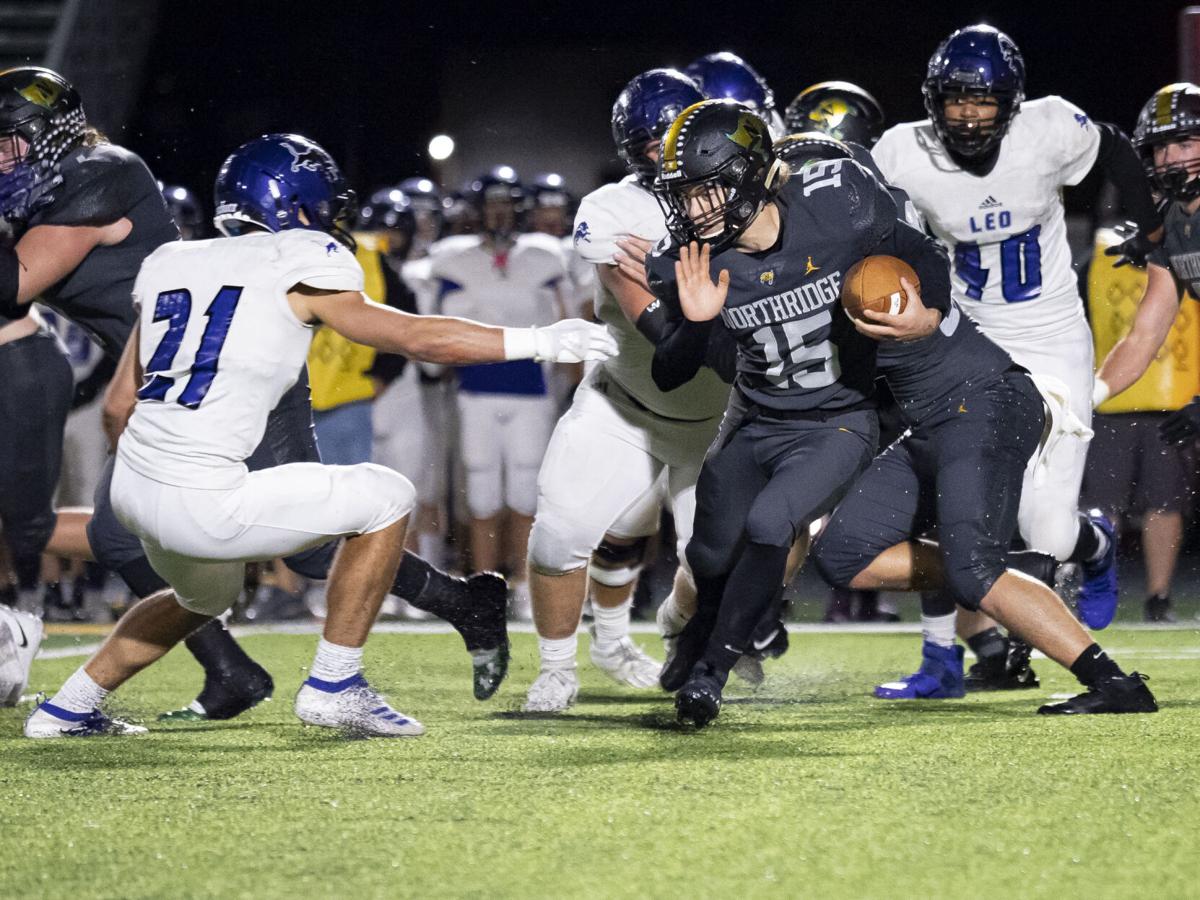 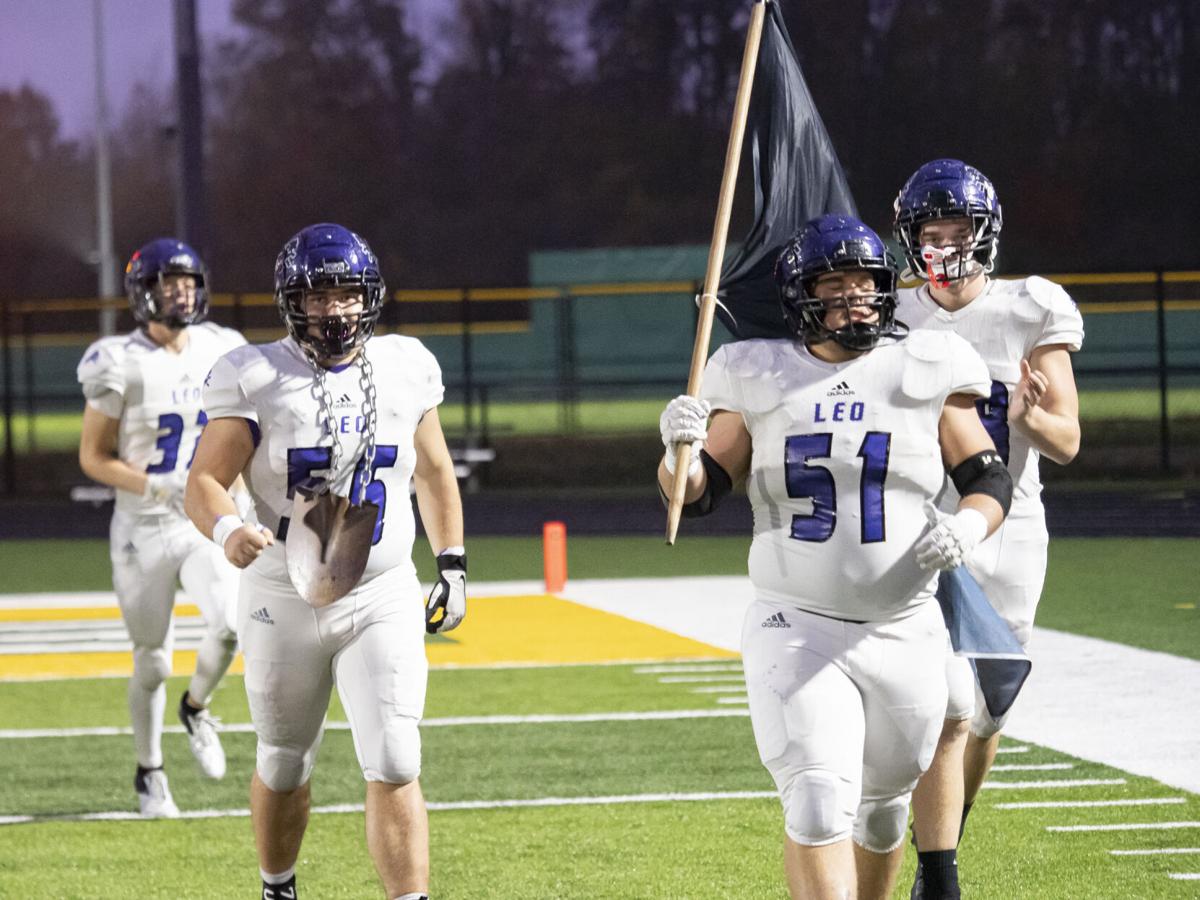 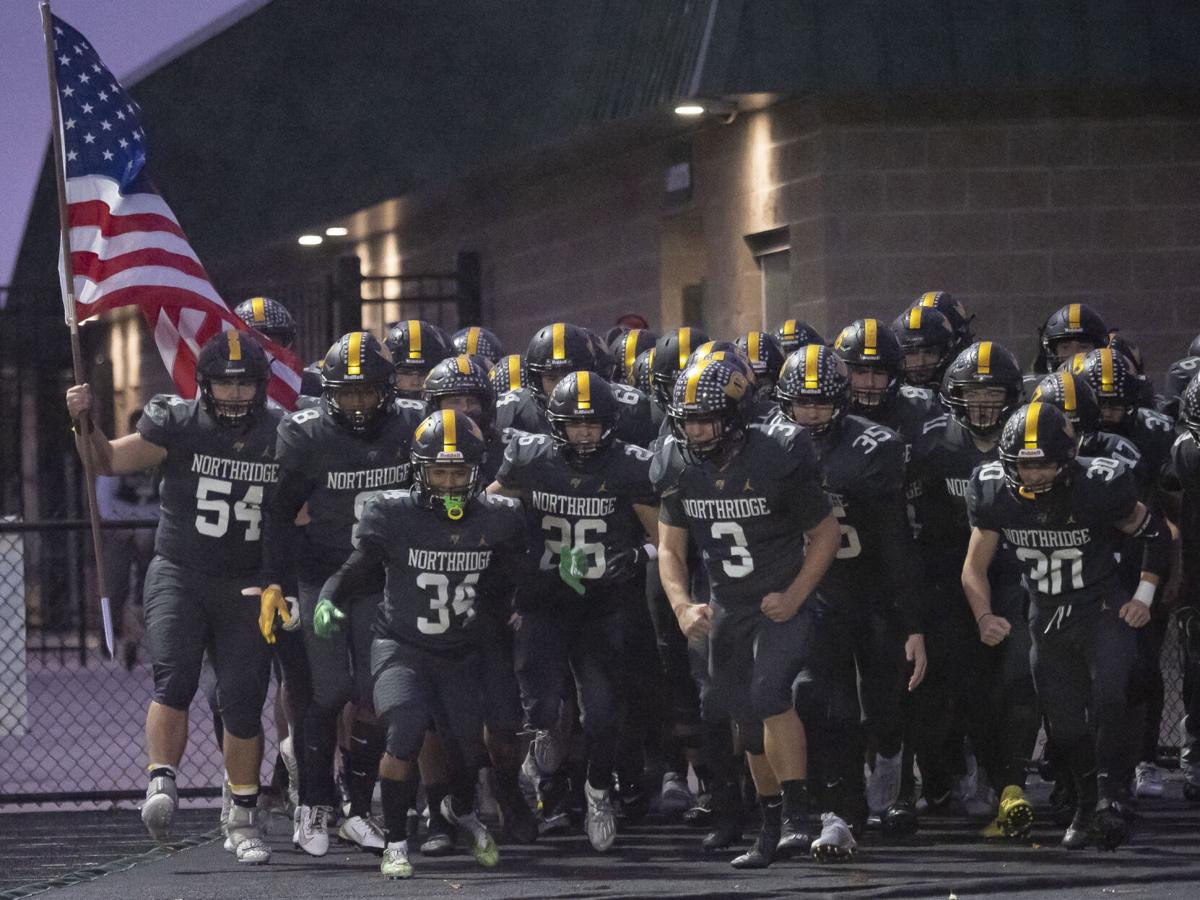 Northridge Raiders running back Andrew Lockwood (3) leads his teammates on the field before Friday's game at Northridge High School in Middlebury. 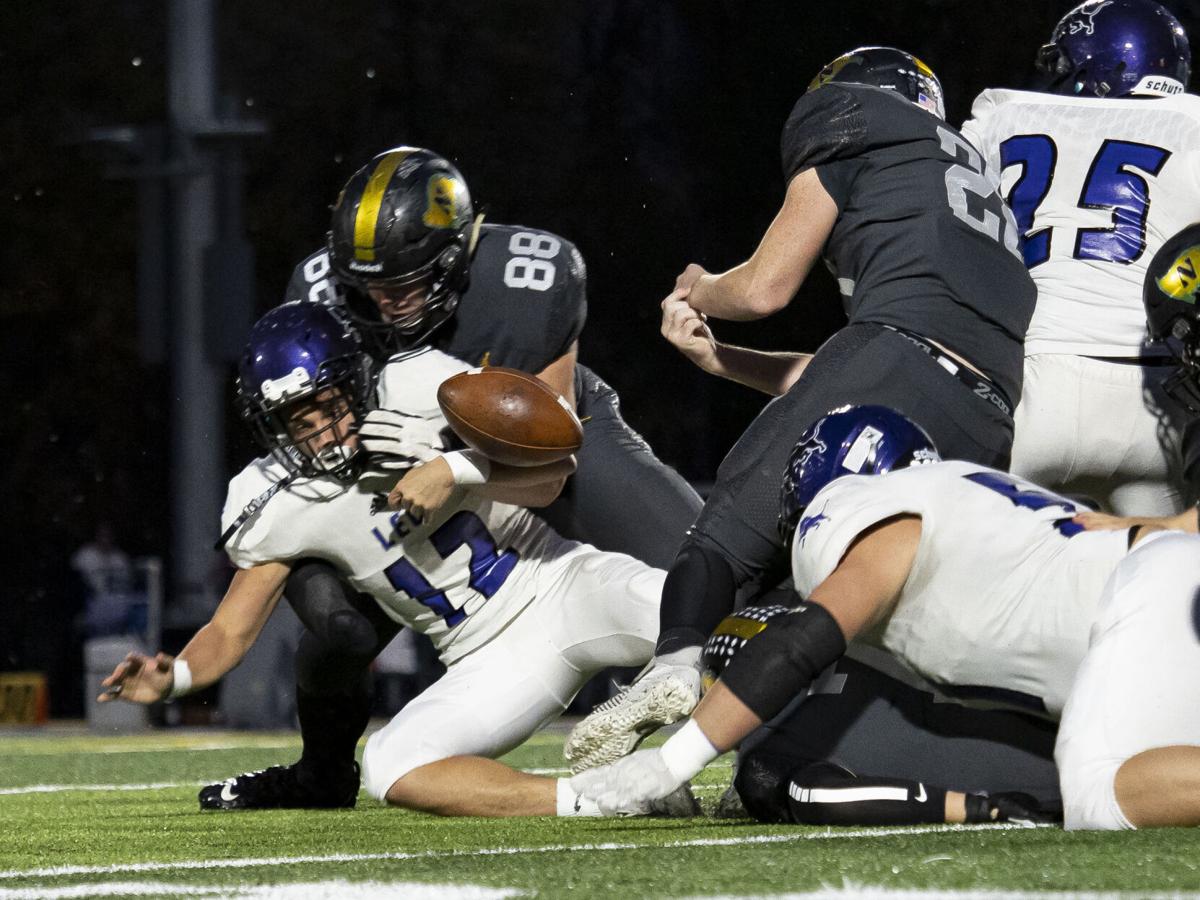 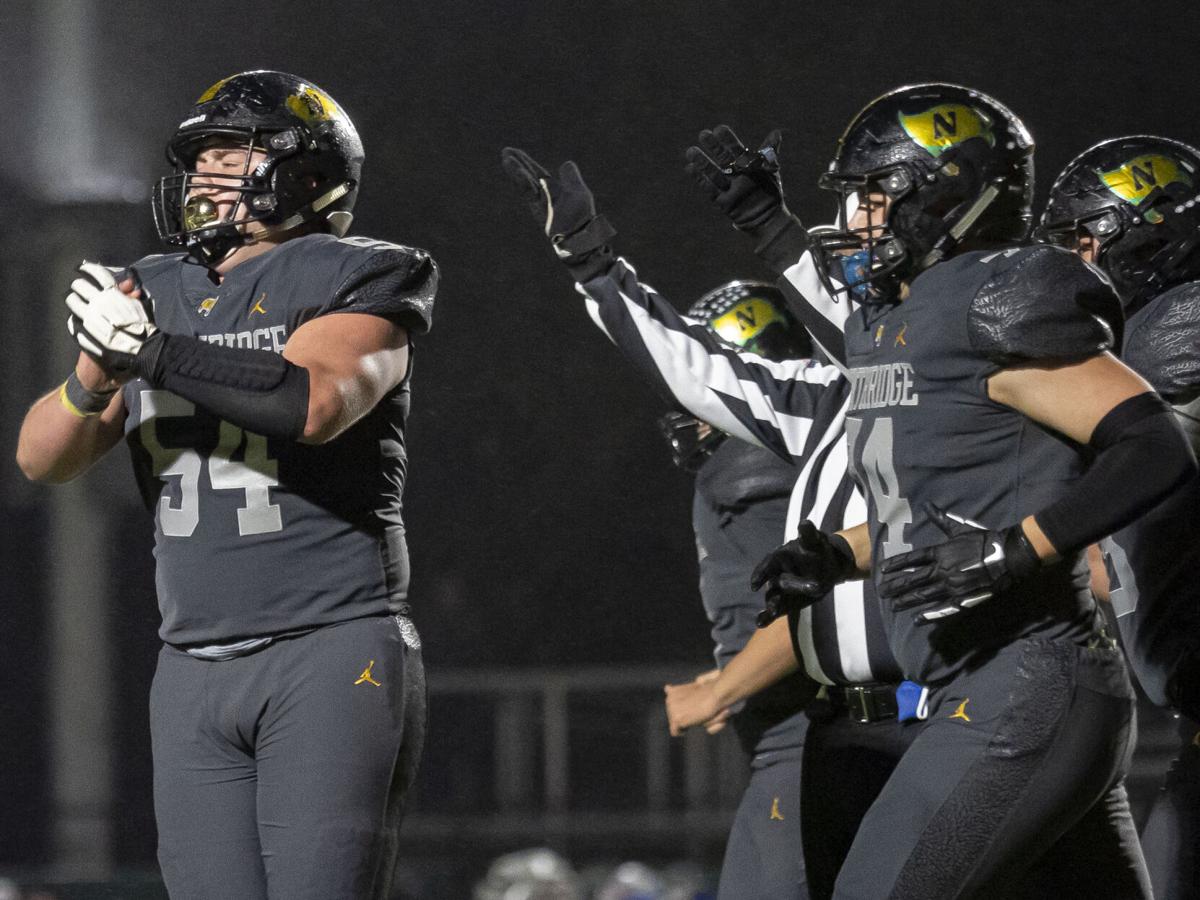 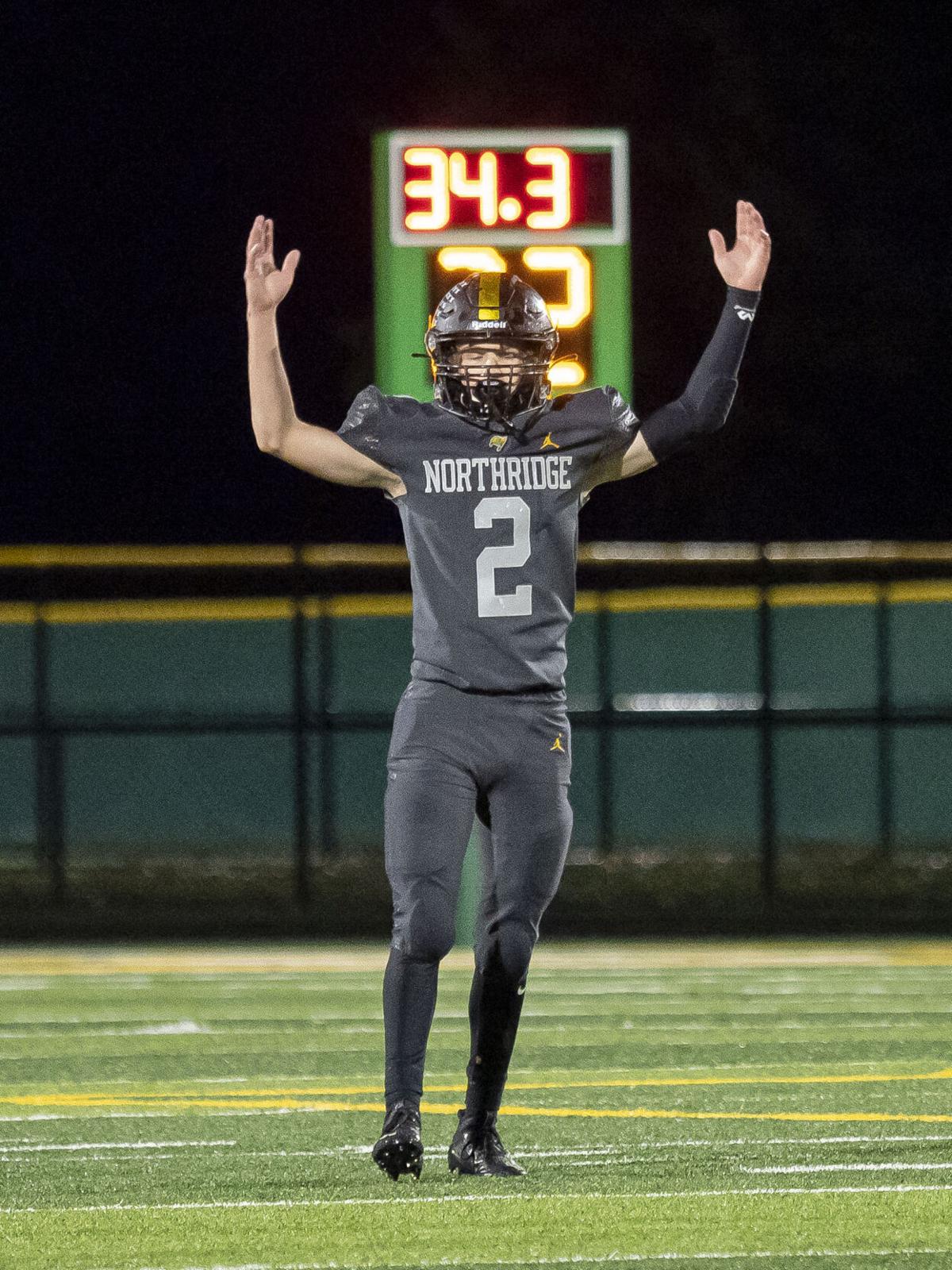 Northridge defensive back Mason Puckett (2) gets the crowd hyped during Friday's game at Northridge High School in Middlebury. 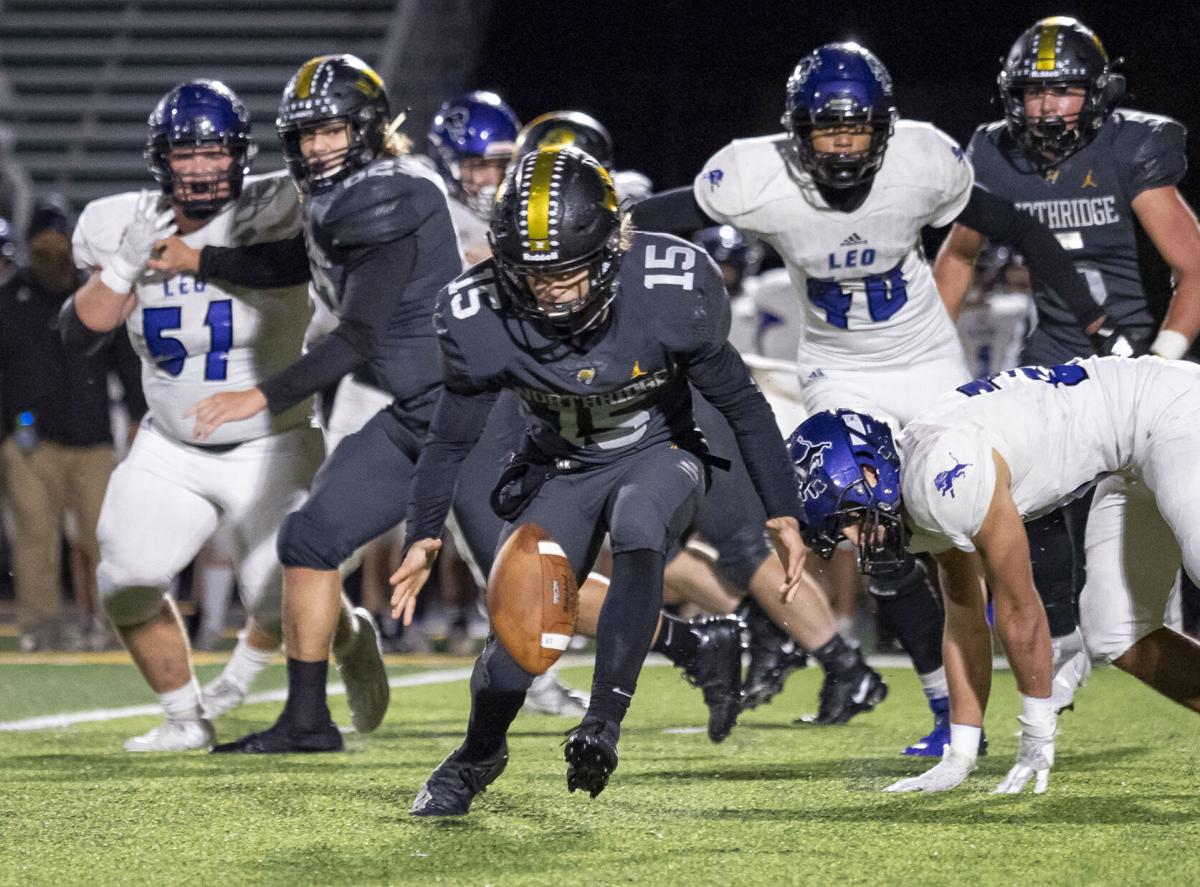 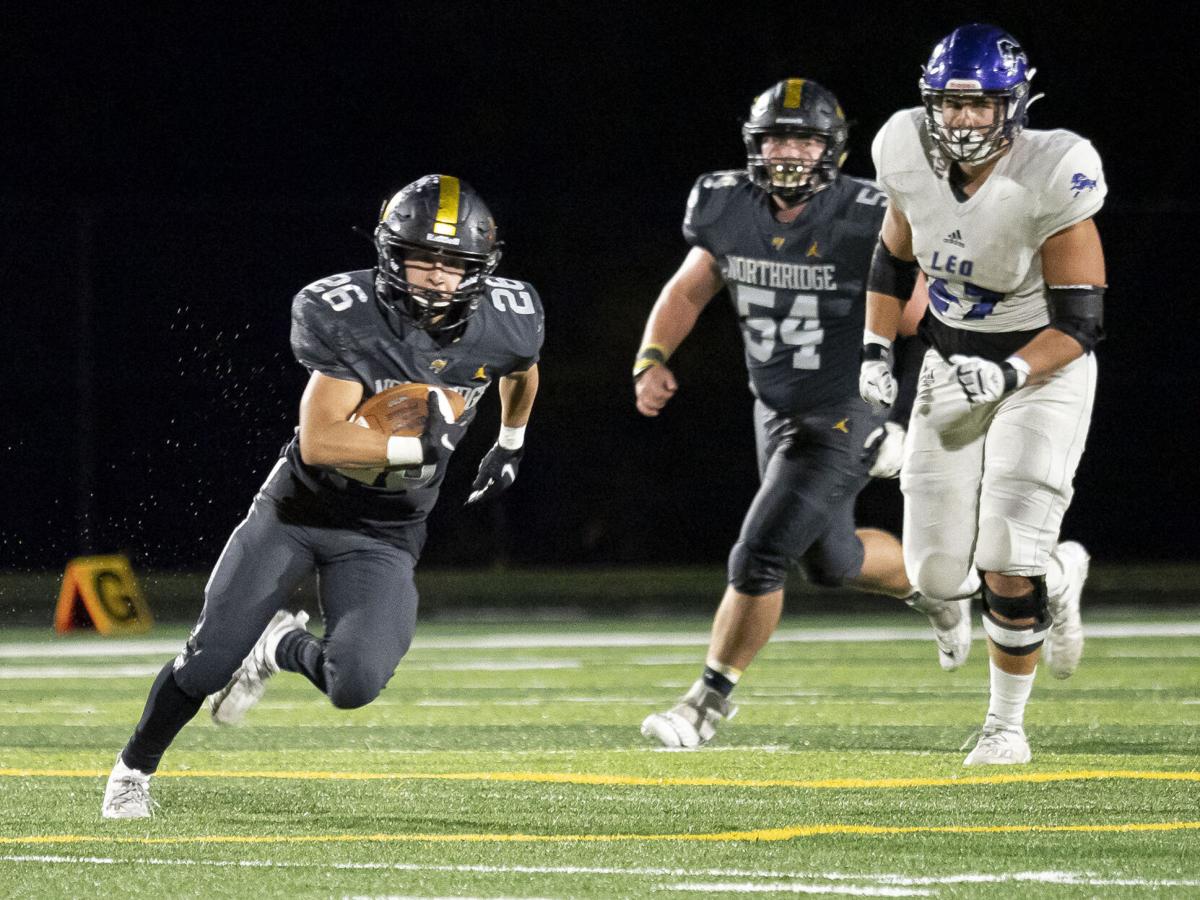 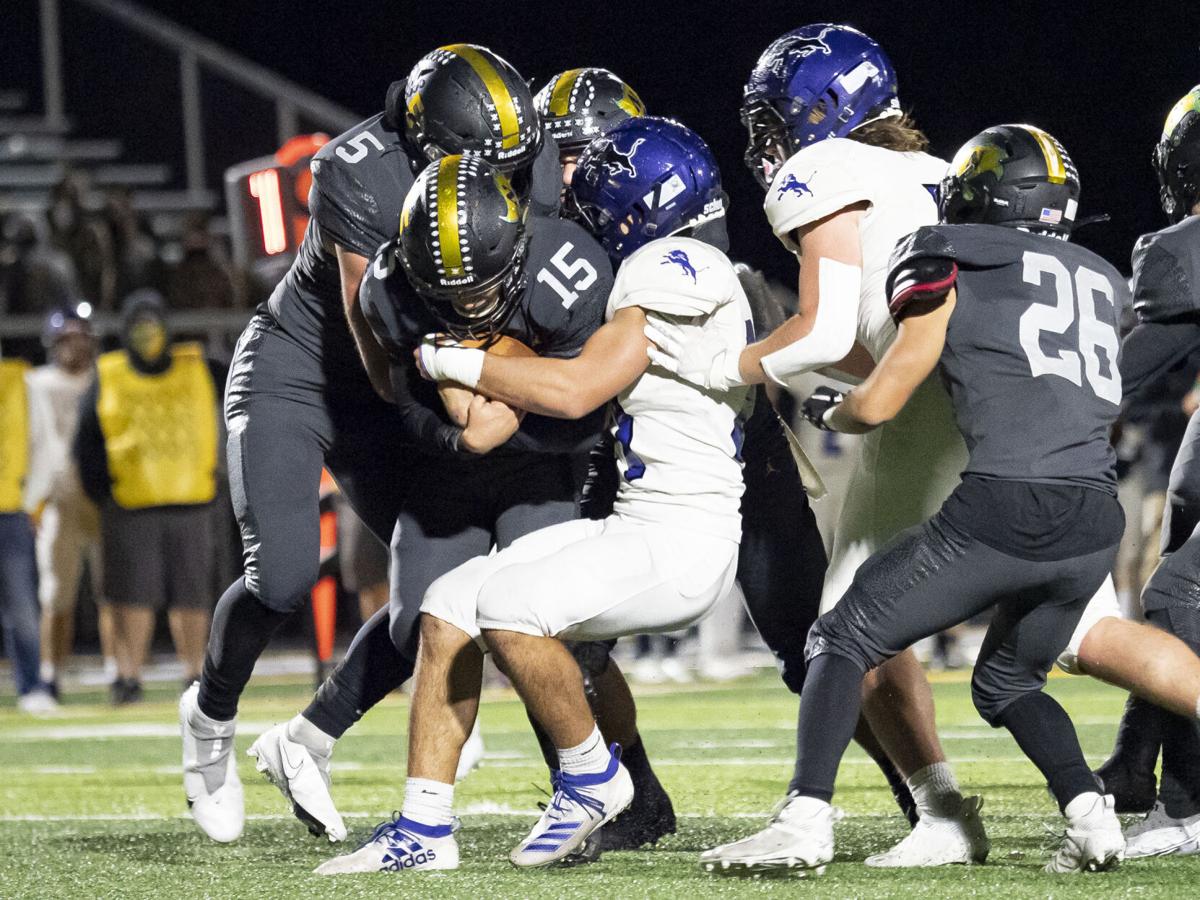 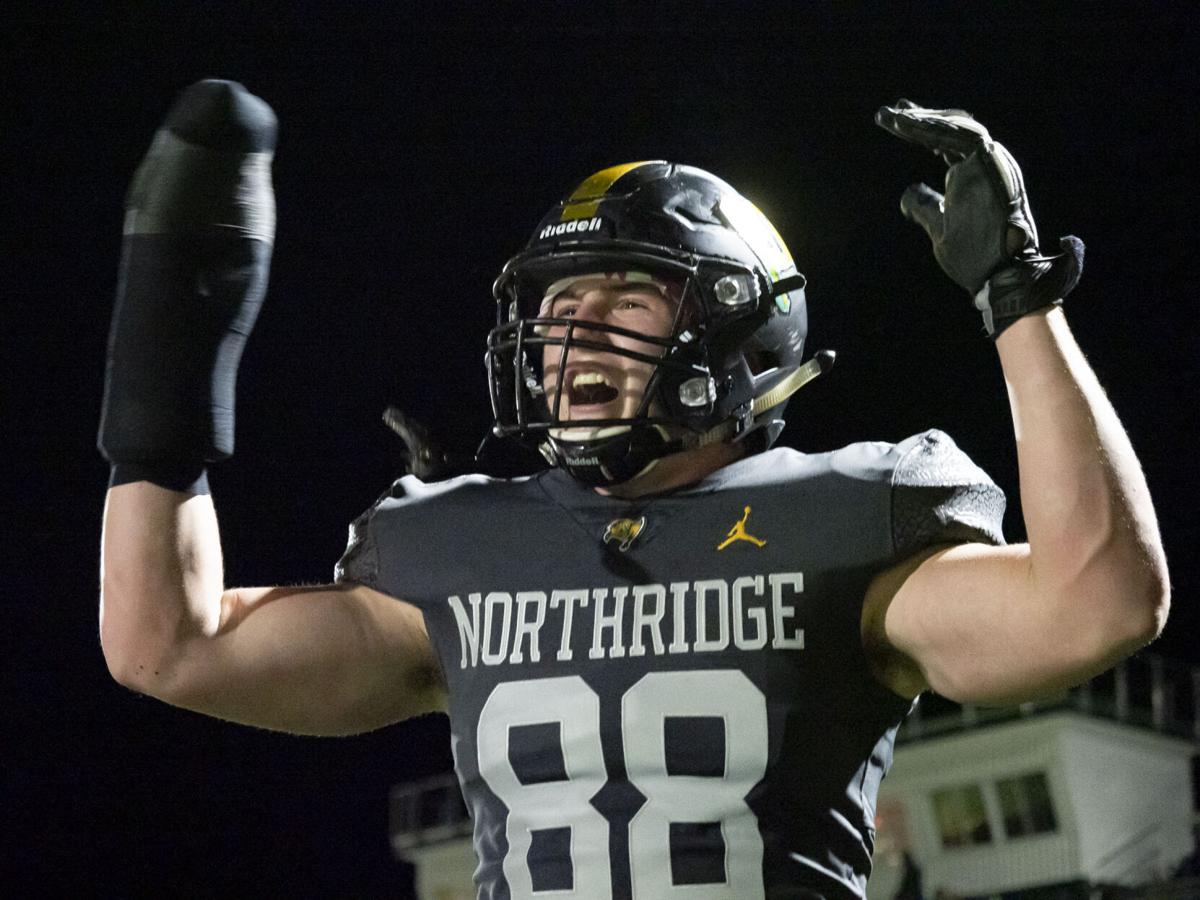 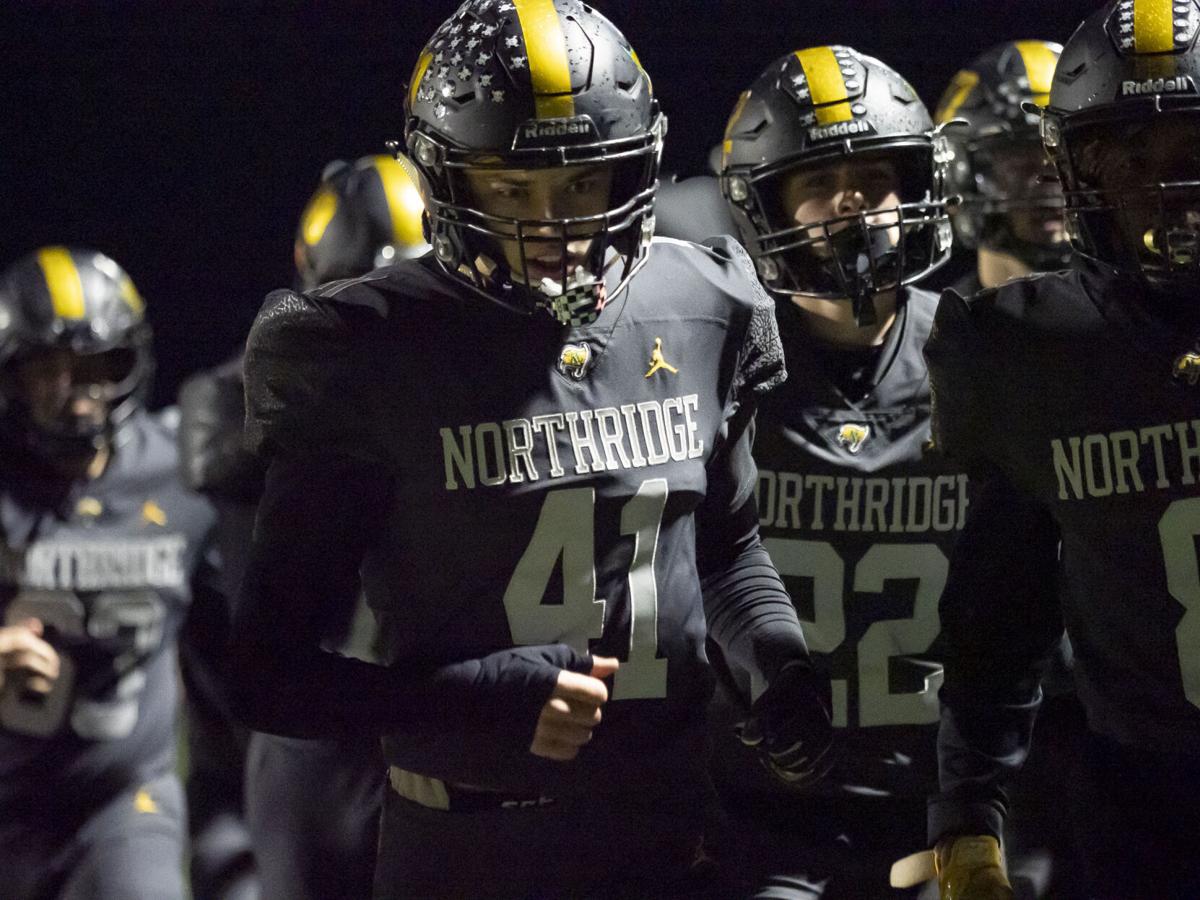 Northridge Raiders wide receiver Taylor Tidwell (41) leads his teammates off the field at half time during Friday's game at Northridge High School in Middlebury.

Northridge Raiders running back Andrew Lockwood (3) leads his teammates on the field before Friday's game at Northridge High School in Middlebury.

Northridge defensive back Mason Puckett (2) gets the crowd hyped during Friday's game at Northridge High School in Middlebury.

Northridge Raiders wide receiver Taylor Tidwell (41) leads his teammates off the field at half time during Friday's game at Northridge High School in Middlebury.

MIDDLEBURY — On a third-and-12 from the Northridge 25-yard line late in the fourth quarter, the Raider defense appeared to make a big stop. Leo quarterback Jackson Barbour threw an incomplete pass over the head of his intended receiver, setting up fourth down.

And then a penalty flag was thrown.

A personal foul was called against the Raiders for hitting of a defenseless receiver. The Northridge coaches argued the pass was uncatchable, but the referees thought otherwise. This gave the Lions a first-and-10 from the Raider 12-yard line.

The Northridge defense then forced a fourth-and-six, sending the Leo field goal unit onto the field. The Raiders were called for an offsides before the kick, then had an unsportsmanlike conduct penalty against them for arguing the call. Instead of a 25-yard field goal attempt, Leo had a first-and-goal from the two-yard line.

Three plays later, Lions junior Tanner Jackson plunged ahead for the three-yard score with 3:38 remaining in the contest, giving No. 6 (Class 4A) Leo a 14-7 victory over No. 12 (4A) Northridge in the Class 4A Sectional 19 quarterfinal round.

Afterward, the talk was about the critical personal foul call on Northridge on the third-and-12.

“I don’t know how you can make a better play than what he made,” Northridge coach Tom Wogomon said. “Quite frankly, getting beat is getting beat, but when it is dealt with as far as those kinds of calls in a crucial situation, there’s no explanation. And, you got to look at these kids — these 18-year-old kids, these 16-year-old kids — and have to explain it to them. I don’t mind 16- and 17-year-olds making mistakes, but I do care when adults make mistakes like that in those situations.

“It is what it is, but the fact of the nature is this is gut-wrenching.”

Northridge took over on their next possession at their 11-yard line and moved it to the 32. On a third-and-nine, though, Raider quarterback Logan Hooley threw a pass that was intercepted by Leo senior Braden Bryant. This gave the Lions the ball back with 2:34 to go in the contest.

“We knew they had to throw the ball in that situation, so (Bryant) just executed his assignment well and jumped the route and made a great catch,” said Leo coach Jared Sauder of the interception.

The Northridge defense was stout, forcing a Leo punt with 2:11 to go. The Raiders picked up a first down, but then had three-straight penalties that backed them all the way up to their one-yard line. A last-second lateral-mania play fell short, and the Lions advanced to the sectional semifinals.

Field position was big throughout the game, especially in the second half. Northridge started from inside their 20-yard line on all seven of their second-half possessions, while Leo started in Raider territory three of their six second-half drives.

“What it came down to, plain and simple, was field position,” Wogomon said. “It was field position all over the place. They had a lot of short fields, and we stood up to them each and every time. And we had extremely long fields. We were looking to catch a break on the field position, and we just didn’t.”

“One of the things we feel we can do is we can trust (punter Carson McCauley),” Sauder added. “On a night like tonight, if we need to run the ball three times and punt like we did on that last series and make them use their timeouts and bury them with a punt to give our defense a better chance, we’ll do that.”

The first half was mostly controlled by Northridge, as they forced two Leo punts on the Lions’ first two possessions. After not scoring on their first drive, the Raiders capitalized on the second one with a two-yard touchdown run from Hooley. Northridge led 7-0 with 2:52 to go in the opening frame.

“I’m kind of kicking myself; I wish we would’ve gone for a field goal on that very first drive,” said Wogomon, who elected to go for it on a fourth-and-eight from the Leo 30-yard line. “It would’ve been really nice to be up 10-0, but we kind of moved ourselves backward for that fourth down.”

It remained a 7-0 game until the third quarter when Leo junior Rylan Crawford took a reverse handoff for a 10-yard score, tying the game with 5:07 left in the third period.

Northridge’s season comes to an end with a 6-3 record. Through all of the ups-and-downs of navigating a season during the COVID-19 pandemic, Wogomon is proud of his players.

“Everything they’ve responded to has been like men. Adults could learn a lesson from this team.”