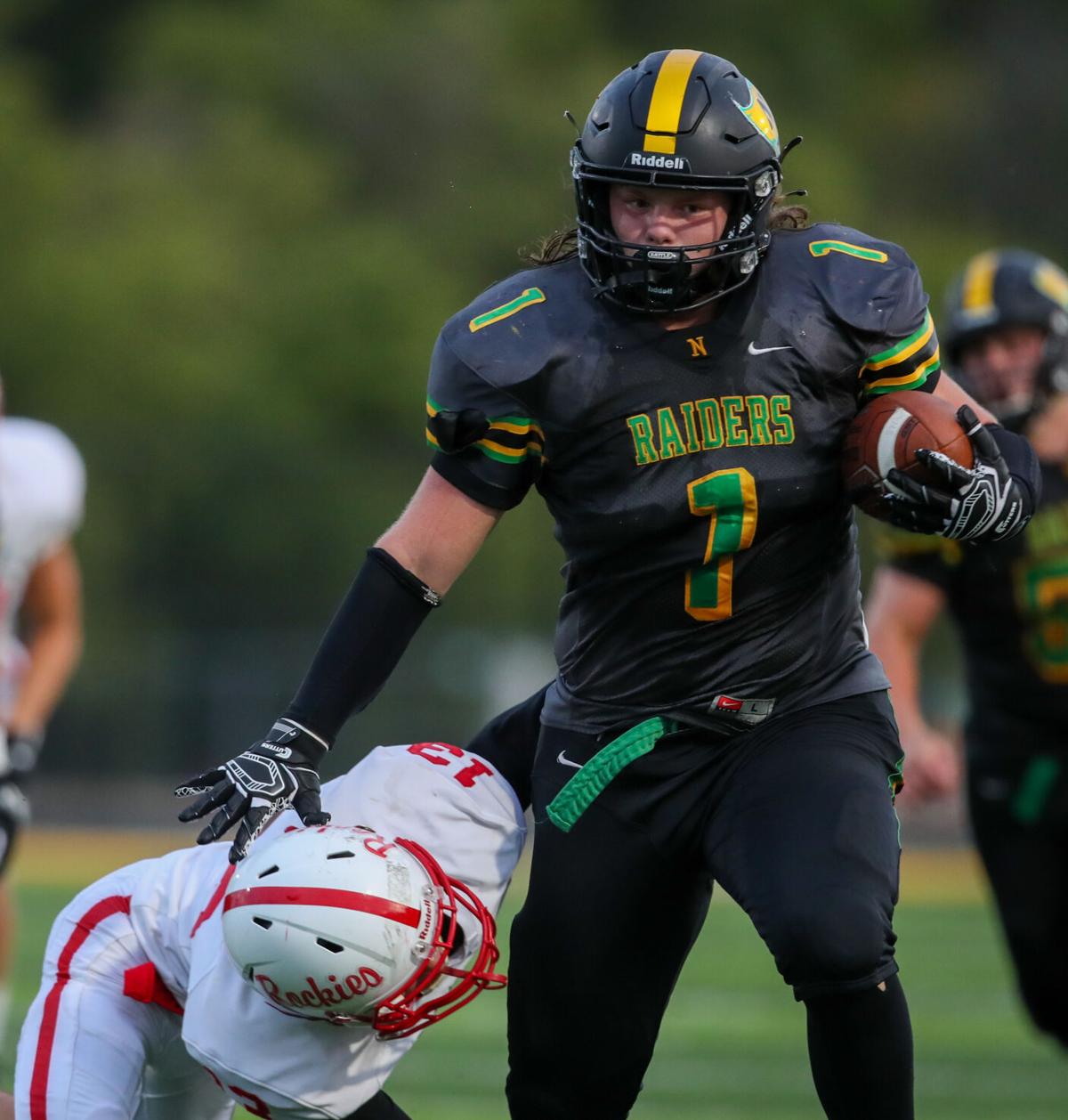 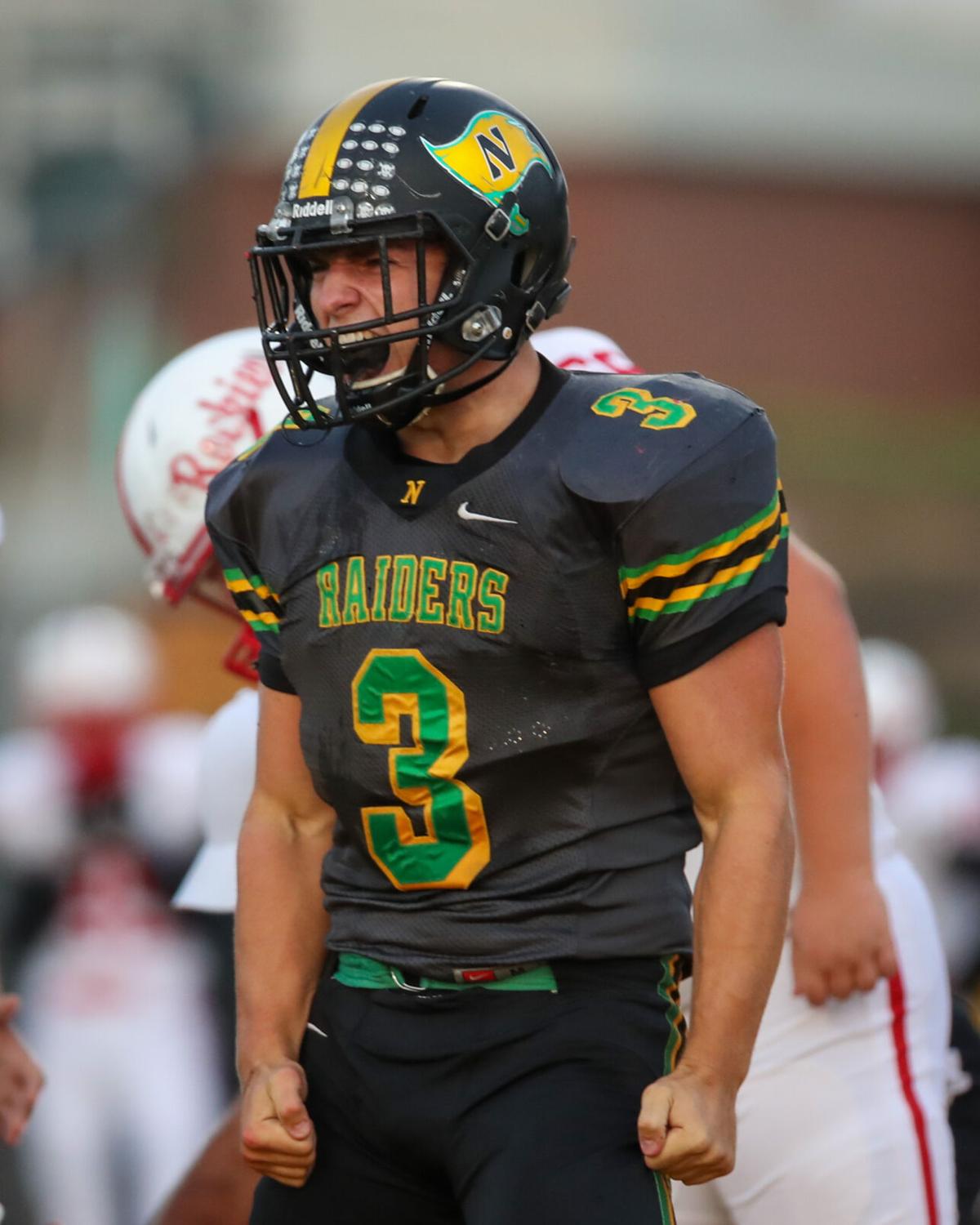 Northridge junior Andrew Lockwood (3) celebrates a fumble recovery for the Raiders in a matchup with Plymouth High School at Raider Stadium in Middlebury. 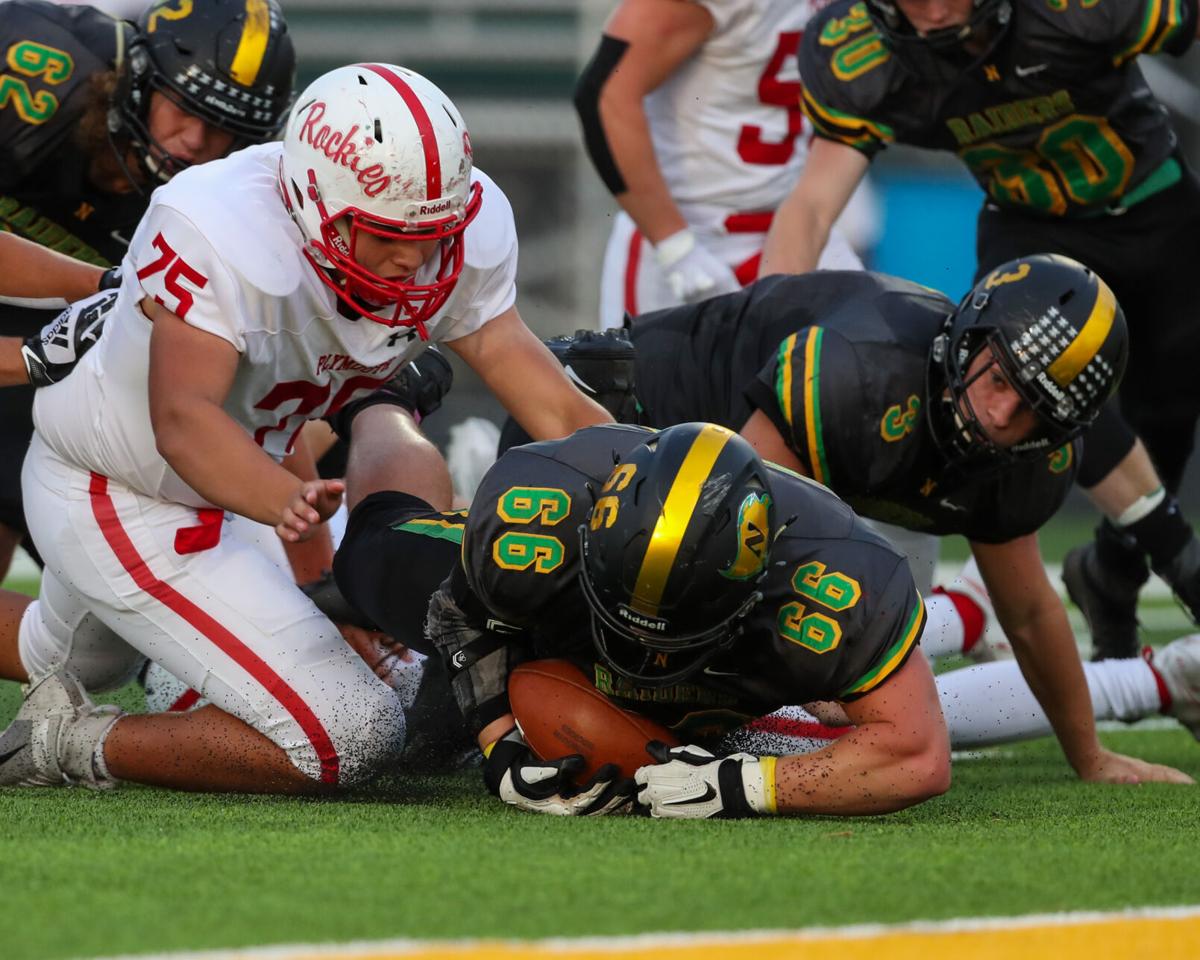 Northridge senior Carter Bach (66) recovers a fumble as Plymouth junior Cristian Quintana (75) attempts to get to the ball at Raider Stadium in Middlebury.

Northridge junior Andrew Lockwood (3) celebrates a fumble recovery for the Raiders in a matchup with Plymouth High School at Raider Stadium in Middlebury.

Northridge senior Carter Bach (66) recovers a fumble as Plymouth junior Cristian Quintana (75) attempts to get to the ball at Raider Stadium in Middlebury.

Playing in the first varsity game on the turf at Interra Field, the Raiders romped to a 44-0 victory against visiting Plymouth.

Northridge, ranked No. 10 by The Associated Press and No. 14 by Indiana Football Coaches Association this week, moved to 3-0 overall and 2-0 in the NLC while dominating the Rockies (0-4, 0-2).

“For three weeks in a row, the defense just played really well,” said Raiders coach Tom Wogomon. “The kids are understanding their fits (in the 3-4 scheme) a lot better this year.

“But it’s beyond that. They know their job and they’re flying to the football. We’re tackling pretty decent, too,” he said. “That was a great team win for us. What a nice way to start in this facility with the community support.”

Plymouth has been shuffling personnel this season and was using its third starting quarterback in three weeks. Jake Reichard started the season at that position, but was moved to receiver when Ivan Winkle went out of the lineup. Zach Masterson was the primary signal-caller in the Rockies’ third game and Lennon Creighbaum took snaps against Northridge.

There was a running clock for much of the second half as the Raiders took a 37-0 lead on a 5-yard run by Justin Puckett and extra-point kick by Carter Stoltzfus with 8:48 to go in the third quarter.

The night’s final points came courtesy of a 69-yard touchdown sprint by Ricky Lloyd and Stoltzfus kick with 2:01 left in the third period.

Carter Bach pounced on a fumble and Logan Hooley scored on a 1-yard quarterback sneak followed by a Stoltzfus extra point for a 7-0 lead in the first quarter.

The Raiders went up 14-0 in the second period on another 1-yard Hooley run and Stoltzfus kick after an interception by Micah Hochstetler.

Dominic Crowder’s 14-yard TD run and Stoltzfus’ conversion kick came on the heels of an interception by Tyrese Thomas.

When Northridge’s Trent Jensen blocked a kick deep in Plymouth territory and the ball went out of the back of the end zone, it resulted in a safety and a 23-0 lead.

A Bach fumble recovery set up the Raiders’ final score of the first half — a 2-yard run by Hooley and kick by Stoltzfus.

The Raiders rushed for 267 yards, including 69 for Lloyd and 67 for Hooley.

The Rockies gained 44 net yards on the ground and 130 through the air.

Mishawaka goes to Plymouth and Warsaw visits Northridge on Sept. 18.

N — (6:50) Plymouth kick blocked out of end zone for safety by Trent Jensen.