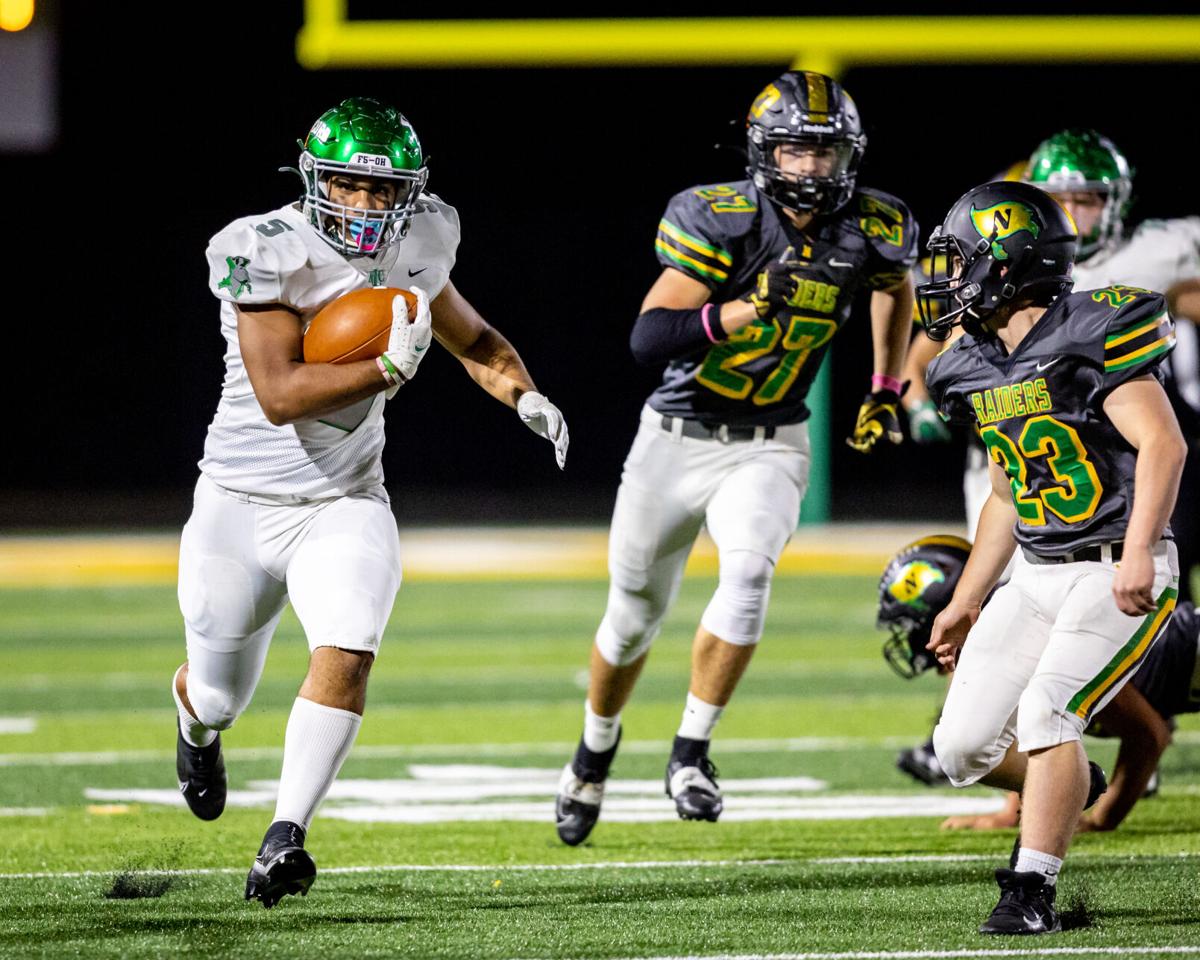 Then-Concord junior Anthony Trudell (5) finds open field as then-Northridge sophomore Collin Heynis (23) tries to cut him off at Northridge High School in this Oct. 9, 2020 file photo. The Concord-Northridge football game, typically held on week eight of the season, will be moving on a rotation basis starting with the 2022 football season.

For the first time in at least 35 years, the Northern Lakes Conference football schedule is getting a complete overhaul.

Concord Athletic Director and NLC Football Chairperson Dave Preheim announced in a press release Wednesday that, starting with the 2022 season, the conference’s football schedule would move to a rotating one that will run through the 2033 season. The 2021 schedule will remain as is.

Along with rotating opponents from weeks 3-8, a new permanent week nine opponent was selected for each team to ensure there isn’t a rematch in the following week’s sectional tournament. The new week nine games starting in 2022 will be Warsaw vs. Northridge, Concord vs. Plymouth, Goshen vs. NorthWood and Wawasee vs. Mishawaka.

So, what does that mean the new schedule will look like? For example, Goshen football’s 2021 conference schedule (weeks 3-9) goes as follows: vs. Mishawaka, at NorthWood, vs. Concord, vs. Warsaw, at Northridge, at Plymouth and vs. Wawasee.

In the 2022 season, weeks 3-9, respectively, will look like this for Goshen: at Wawasee, vs. Mishawaka, vs. Northridge, at Concord, vs. Plymouth, at Warsaw and at NorthWood. Those games will remain in that same order in 2023, but the locations of the contests will be flipped.

“This establishes a truly rotating schedule that for the duration of the format, each team plays every other team in every available week of the conference season (weeks 3-8),” the release said.

Preheim expressed satisfaction with the new schedule for multiple reasons.

“One of the big strengths of this plan is that it ensures teams have an equal distribution of home and away games throughout the season,” Preheim said. “No coach or athletic director would be excited about being away four of the first five weeks. This plan keeps that from happening. Additionally, it prevents the potential for teams to have to play each other in week nine and then again in the first round of the sectional.

“The football coaches should be commended for their efforts to seek viable solutions to the previous problems. With a few changes when teams have joined or left the conference, the schedule has been the same for at least 35 years. We think this will be a positive for our teams, coaches, and fans in the years to come.”

Five Goshen News coverage area schools play in the NLC. Here were those football coach’s reactions to the news of the new schedule.

Craig Koehler, Concord, 7th season as HC: “This is long overdue and will inject some additional energy and excitement into an already extremely competitive league.”

Kyle Park, Goshen, 8th season as HC: “The conference schedule has been the same for over 30 years. It’s been talked amongst our head coaches for a few years and there were a lot of logistical things that needed to be ironed out to make the change. I really don’t have an opinion one way or the other. We still get to play every team in our conference. Personally, I just didn’t want to see all of our long road trips in the same year. This will surely be different, but change isn’t always bad.”

Chad Eppley, Northridge, 1st season as HC: “I think it’s great. There’s definitely going to be an adjustment period seeing as we’ve had the same schedule for the past 35 years, but I think it’s going to make the NLC very interesting and even more competitive.”

Nate Andrews, NorthWood, 8th season as HC: "The traditionalist in me likes the old set schedule. But at the same time, this mixes things up, provides some excitement and, on the surface, could create some competitive balance."

Jon Reutebuch, Wawasee, 3rd season as HC: “I think it’s a nice change up to a schedule that has been set in place for a long time. Avoiding playing teams twice in a row, last regular season game and sectional first round was important. It will be fun to see different teams at different times of the year. I feel it only adds competitive balance with respect to all schools in regards to home games.”

To see the full NLC schedules for each football team from 2022-2033, visit the web version of this story online at goshennews.com/sports.