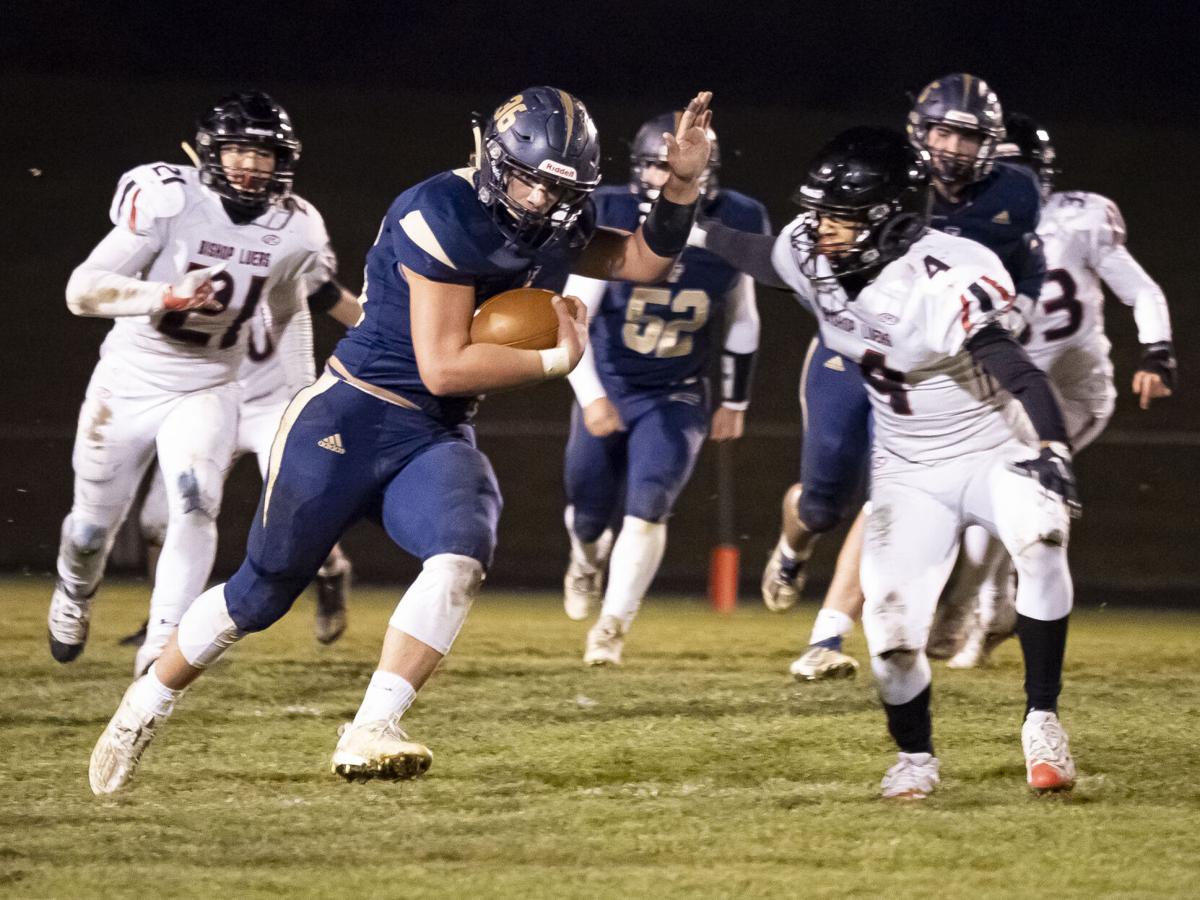 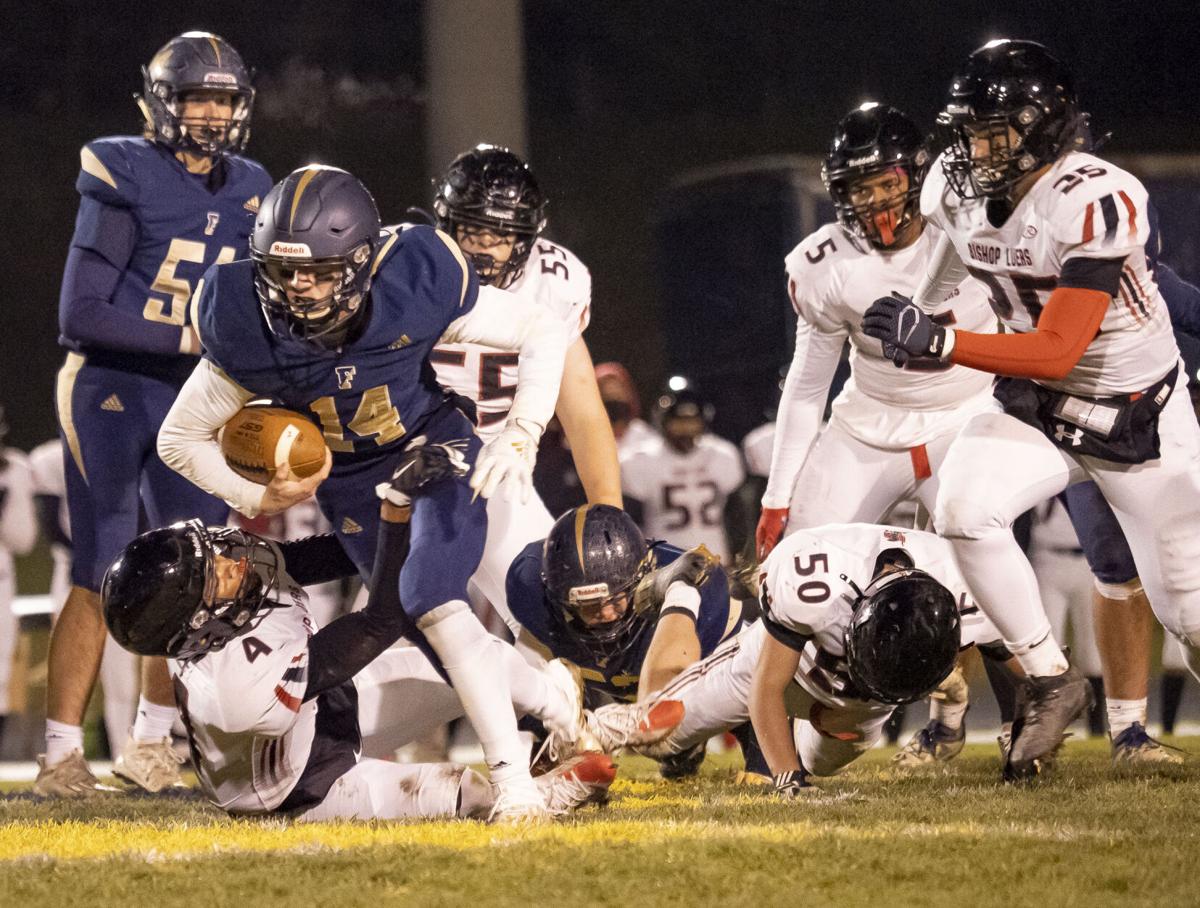 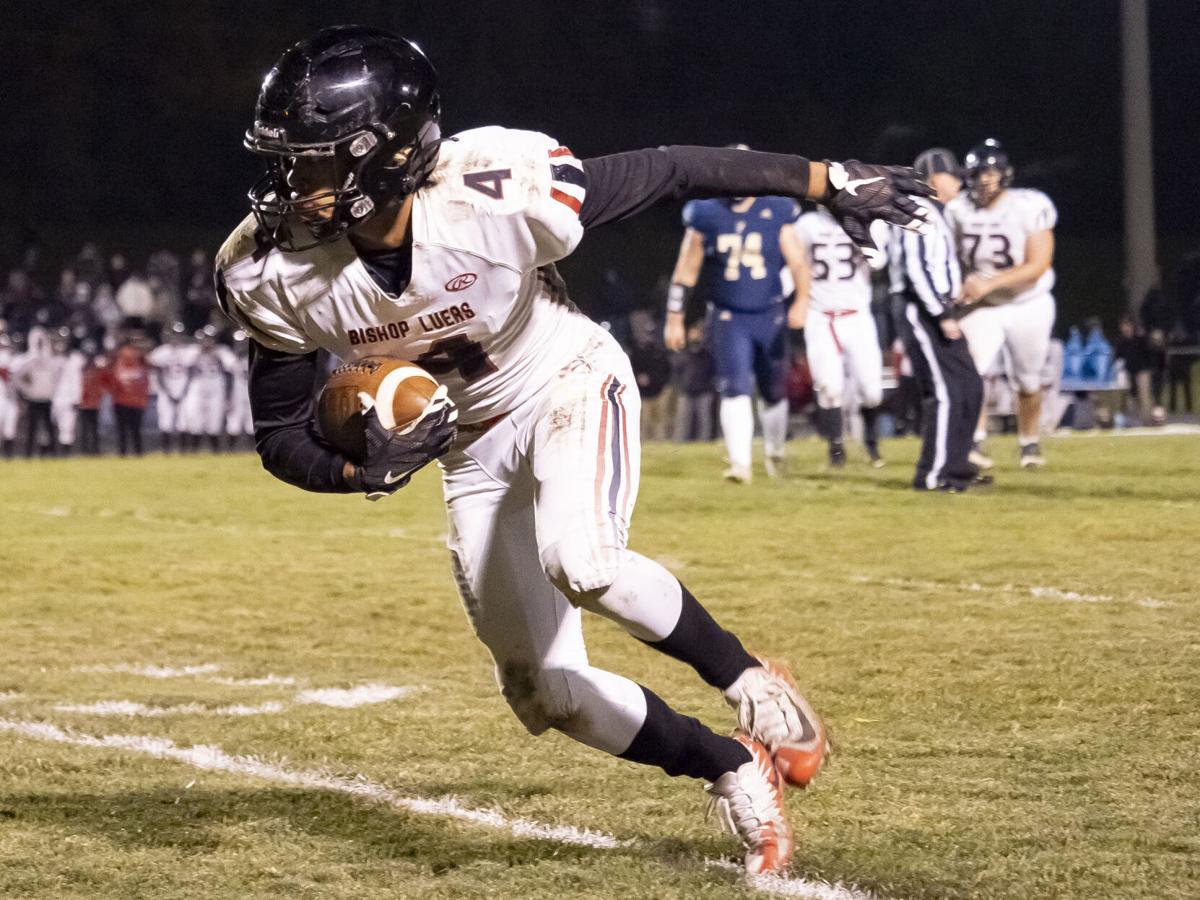 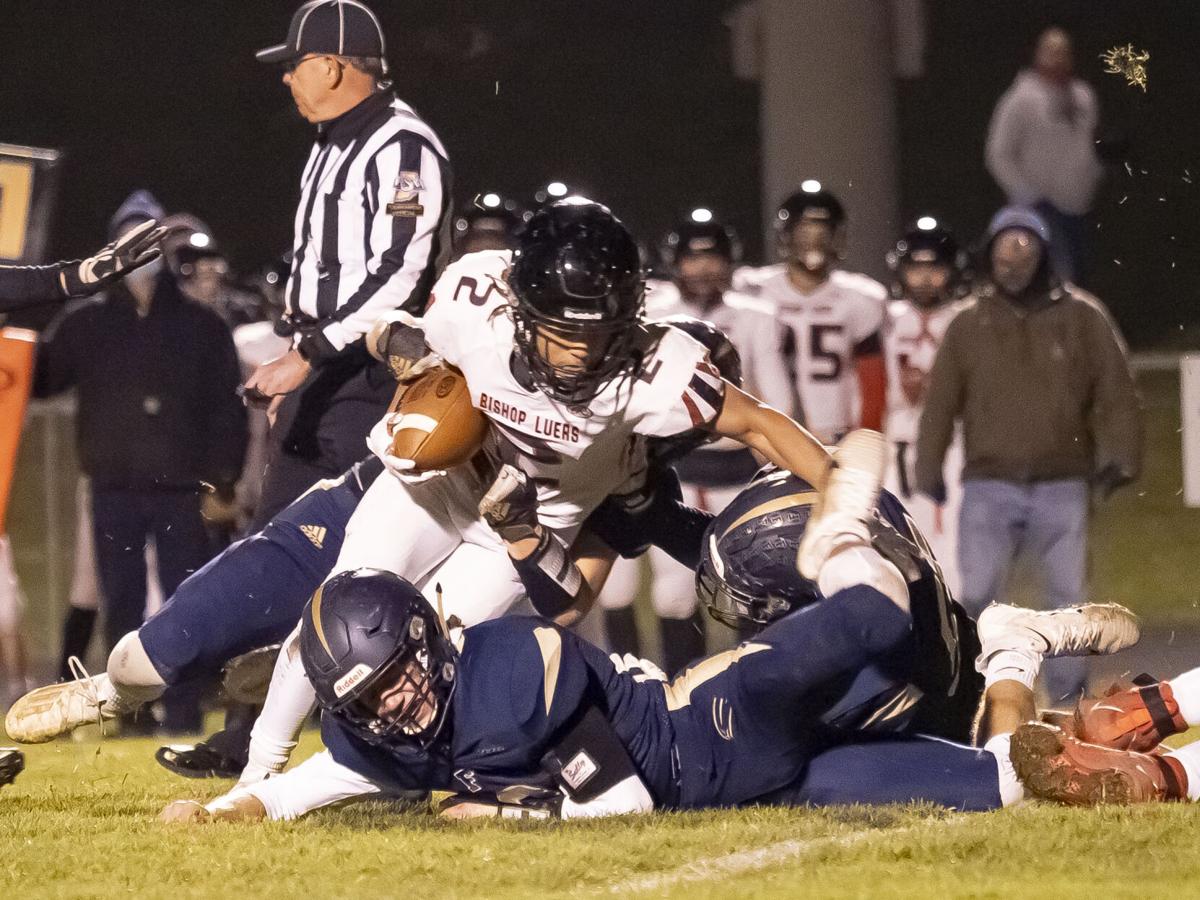 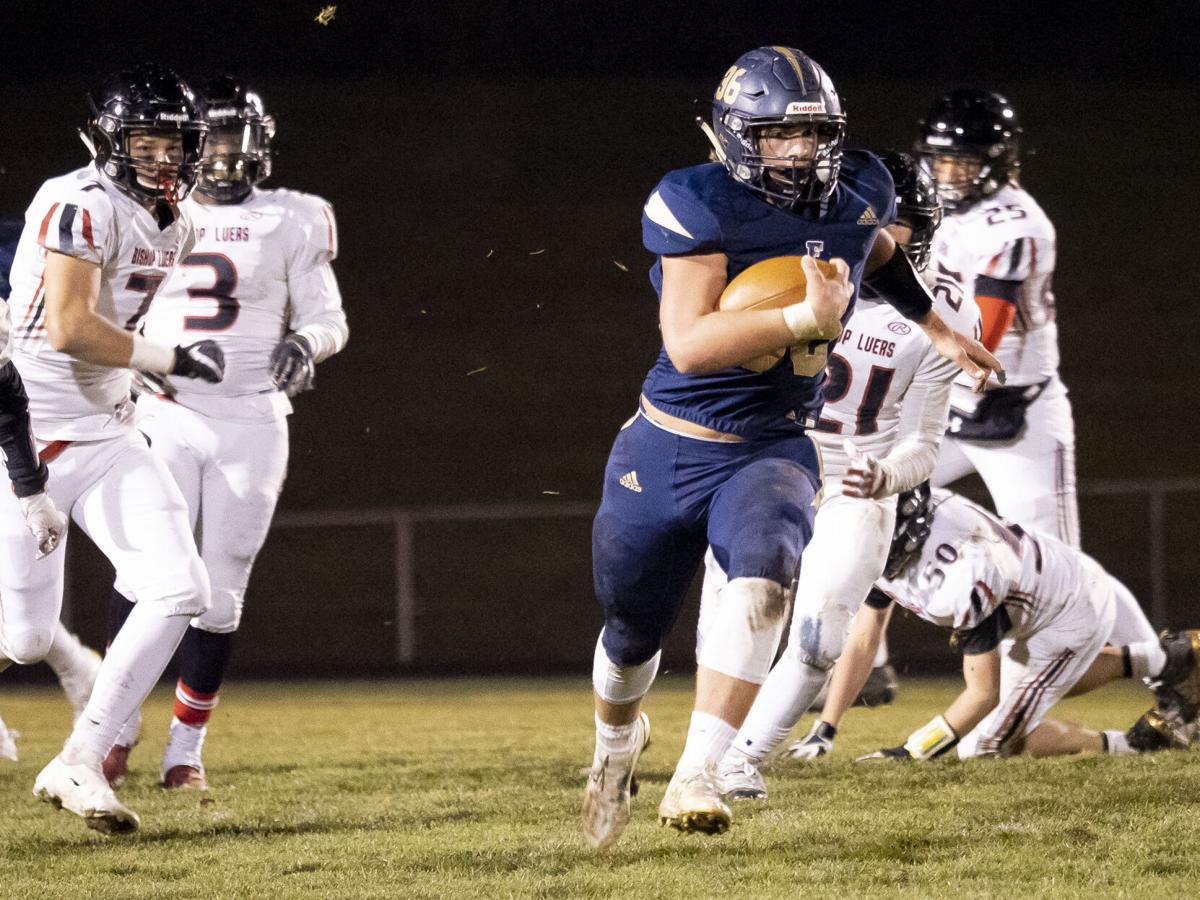 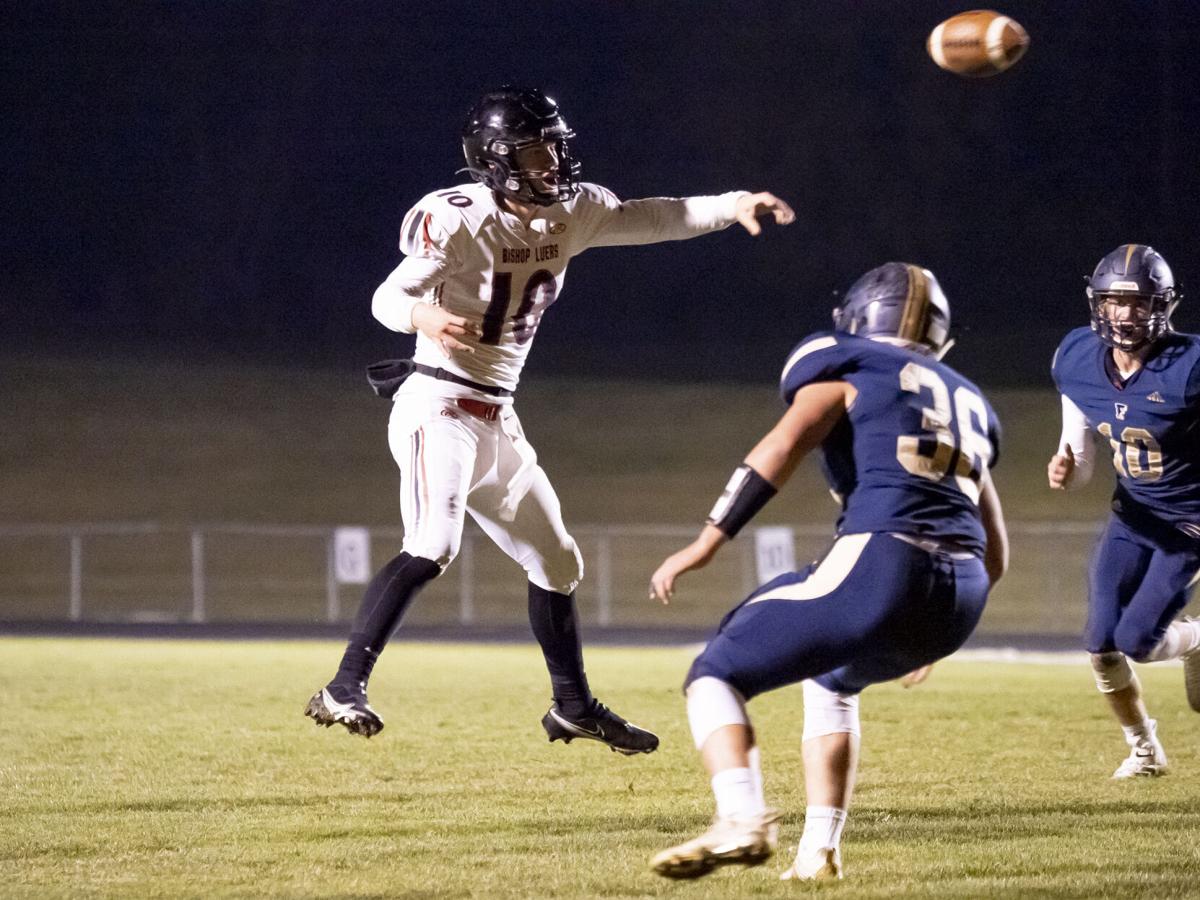 GOSHEN — At halftime, Fairfield only trailed Fort Wayne Bishop Luers, 21-6. Although they were down multiple scores, the Falcons were still within striking distance — and started the second half with the ball.

Three turnovers on their first five offensive plays of the half led to three Luers touchdowns, though, and Fairfield’s magical season came to a sudden halt with a 49-12 loss to the Knights in a Class 2A, Sectional 35 contest Friday night in Benton.

Fairfield’s season comes to an end with a 9-1 record. It was the Falcons' first undefeated regular season since 2008. That season, like this one, also came to an end with a second-round postseason exit at the hands of Luers.

“You’ve got to give Luers credit: they have athletes all over, and they utilized them,” Fairfield coach Matt Thacker said. “They got the job done. It wasn’t our night.”

Two plays later, Fairfield fumbled a handoff exchange and it was scooped up and ran back 40 yards by Knights sophomore Da’Von Doughty. In the blink of an eye, it was 35-6 Luers with 8:59 left in the third quarter.

The Falcons showed some life on the ensuing kickoff return, as senior Brock Short ran it all the way back to the Knights’ 6-yard line. On the first play after the return, though, Fairfield fumbled the ball at the goal line and it was recovered in the end zone by Luers. This gave the Knights the ball at their 20-yard line.

After a holding call negated a run play, Clark found Glenn once again — this time on an 81-yard bomb down the right sideline — to put the game truly on ice. Luers led, 42-6, with 7:39 remaining.

“That’s a killer,” said Thacker of the three turnovers to start the second half.

Both teams added a touchdown in the fourth quarter to produce the final score.

Each team only had one possession each in the first quarter, with the Fairfield one not ending until early in the start of the second. On Luers' first drive, the Knights drove 12 plays down the field before the Falcon defense forced a field goal attempt from the Fairfield 8-yard line. Knights sophomore Roel Pineda came out for the 25-yard attempt, but it was blocked by Fairfield junior Jonathan Estep, keeping the game scoreless.

The Falcons countered with a 15-play drive, but it stalled out when a fourth-and-six rushing attempt from Lantz was stopped for negative yards. This gave Luers the ball at their own 32-yard line to start its second drive.

The Knights moved quickly on their first scoring drive, going 68 yards on three plays to take a 7-0 lead. Clark hit Antwian Lake on a 28-yard pass, Sir Lane ran 25 yards and then Ramon Anderson capped the drive with a 15-yard rushing score, putting Luers ahead less than a minute into the second quarter.

Fairfield countered immediately on its next drive. After moving to the Knights’ 35 yard line, Lantz found senior Dalton Cripe on a crossing route, which Cripe took the remaining 20 yards into the end zone for the 35-yard score. The Falcons went for the two-point conversion, though, and Lantz was stuffed short. This kept Luers ahead, 7-6, with 7:39 left in the first half.

A bunch of penalties from both teams plagued the next drive, but it ended on a two-play sequence from the Knights. Clark found Johnny Sewell for a 28-yard reception, putting Luers at the Fairfield three-yard line. On the next play, Anderson punched it in to give the Knights a 14-6 advantage.

On the ensuing Fairfield possession, the Falcons fumbled and Luers recovered at midfield. The Knights took advantage, driving five plays before Clark connected with Brody Glenn on a 17-yard touchdown reception, stretching the Luers lead to 21-6 by halftime.

It was an offensive clinic for the Knights all game. Clark finished 14-of-15 passing for 265 yards and three touchdowns. Glenn had 152 yards receiving on six receptions and three scores, and Luers had three rushers go for 40-plus yards on the ground.

It’s been a reclamation project for Thacker, who went 0-8 in his first season and was outscored 493-27 in the process. An undefeated regular season is something to build off of for him, and he credits the 12 seniors for sticking through the ups-and-downs of the last three seasons.

“They’re just special kids,” Thacker said. “Yeah, we’ve come a long way, and they’re the reason for that. They have put Fairfield back where it belongs. But we still have a ways to go, and we’re going to get there. It’s just a process, and you have to embrace it. You have to love it; even these moments, you have to love. It’s hard, but it’s part of it. This is why it’s the greatest game. We got to play 10 games this year, and I didn’t know if we’d play one.