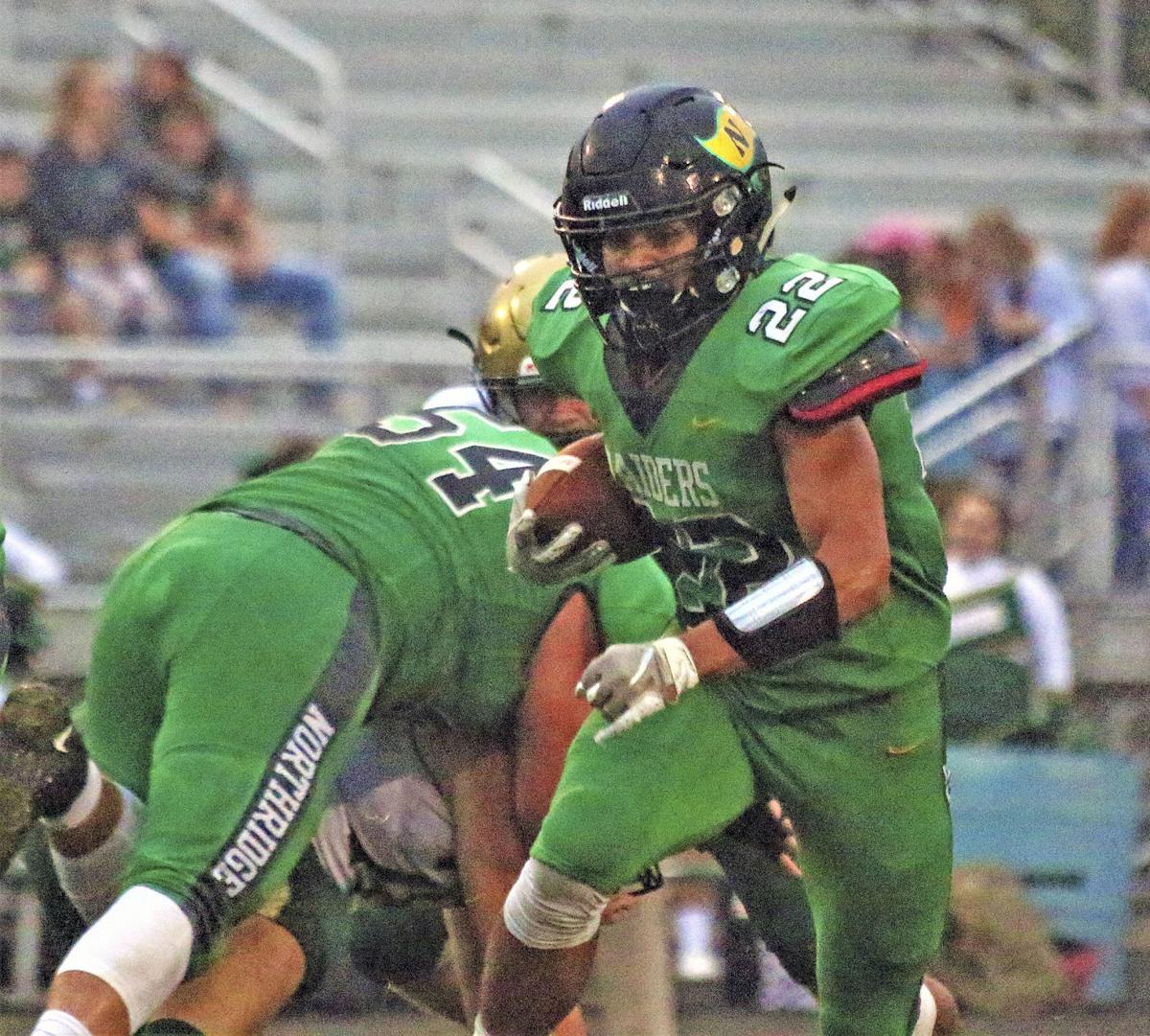 Northridge running back Caide Lacey, 22, finds running room on his way to the end zone for his first touchdown of the evening Friday night against Wawasee. 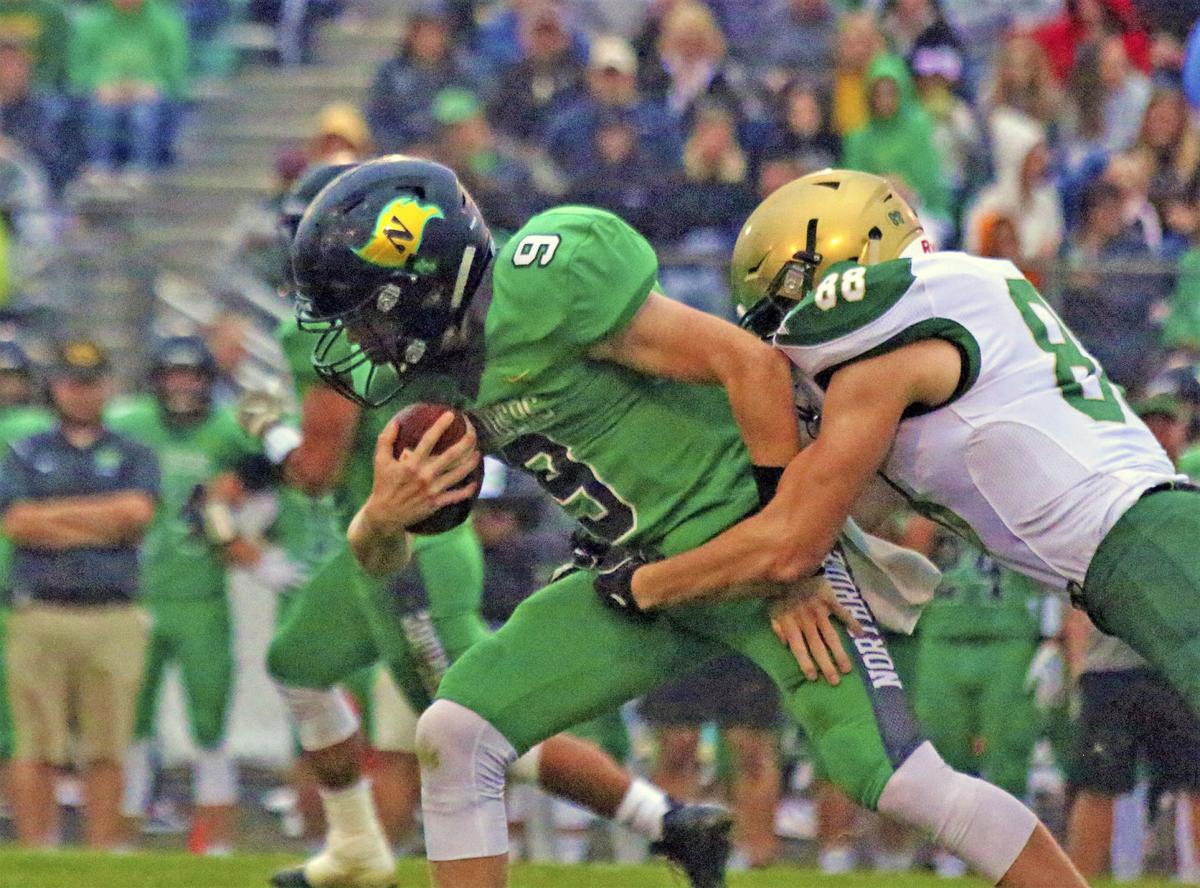 Northridge wide receiver Breckin Judd, 33, makes a move past Wawasee defensive back Ethan Garza after making a reception during the first half of their NLC matchup Friday night. 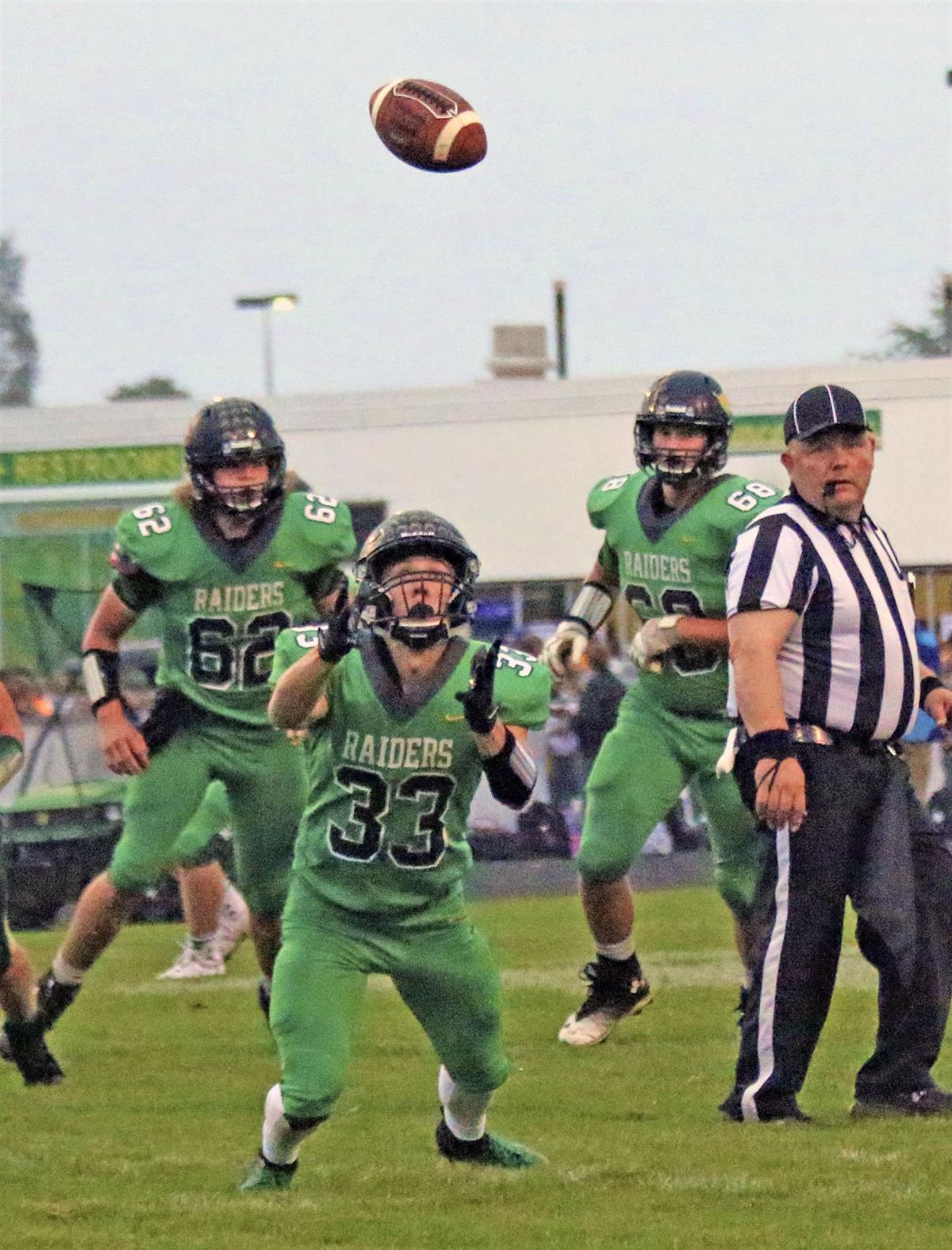 Justin Cripe | The Goshen News Northridge wideout Breckin Judd, 33, keeps his eye on the ball to make a reception after it bounced off two players in the first quarter of their game against Wawasee Friday night. 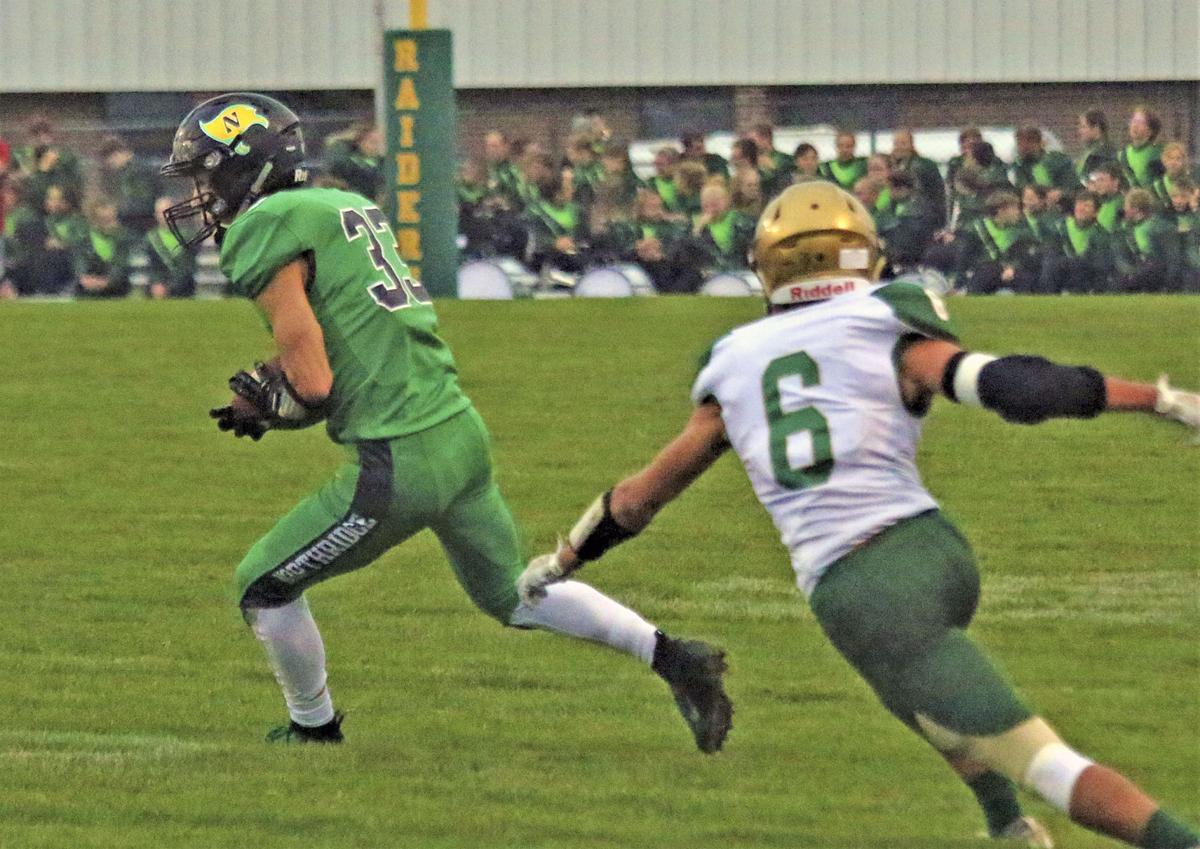 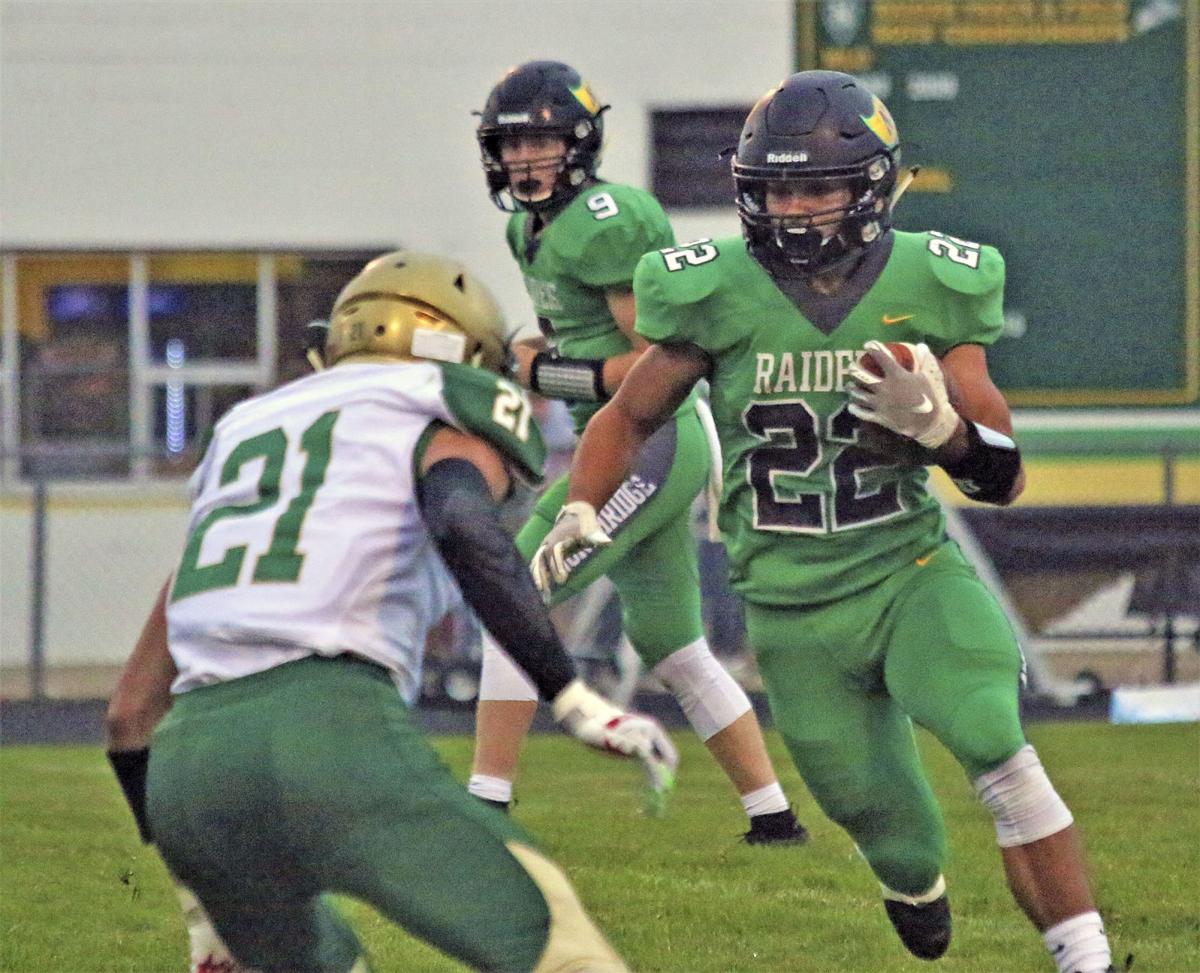 Northridge running back Caide Lacey, 22, finds running room on his way to the end zone for his first touchdown of the evening Friday night against Wawasee.

Northridge wide receiver Breckin Judd, 33, makes a move past Wawasee defensive back Ethan Garza after making a reception during the first half of their NLC matchup Friday night.

Justin Cripe | The Goshen News Northridge wideout Breckin Judd, 33, keeps his eye on the ball to make a reception after it bounced off two players in the first quarter of their game against Wawasee Friday night.

The senior had 217 yards rushing and three touchdowns in a 27-0 victory over Wawasee in the Northern Lakes Conference opener for both teams.

“Holy smokes,” Northridge coach Tom Wogomon said about Lacey’s performance after the game. “I’d hate tackling him. That guy played so well. At halftime, we said we need to play everybody the way Caid Lacey is playing right now. He was just a battering ram, refused to go down.

“He plays bigger than his weight is. He may be 175 (pounds) but boy, he just plays so powerful. I’m just glad he’s wearing our helmet and our jersey, because I would not like to tackle or defend him.”

Although there was no scoring in the first quarter, Northridge set the tone from the start of the game, logging a 13-play, 57-yard drive that took off more than seven minutes off the clock.

“It’s kind of what we’re trying to do right now and establish,” Wogomon said of the opening drive. “We made mistakes that we hadn’t made the first two weeks; just little things that ended up being drive killers. … I love watching long-playing drives when we’re on the offensive side — I hate it when we’re on the defensive side. We were just moving the ball.”

Meanwhile, the Raider defense suffocated the Wawasee offense, holding them to three-straight three-and-outs.

Northridge finally broke through in the second quarter when Lacey dashed 34 yards to the end zone. Lacey also fell out of bounds at the five-yard-line, but maintained his balance to fall into the end zone for the score.

It was a dominant first half for the Raiders. They outgained Wawasee 248-50 in yards and held the Warriors to just one first down. Northridge also forced two turnovers, both in the final three minutes of the second quarter.

“Wawasee just wasn’t able to settle in and establish themselves, offensively,” Wogomon said. “The defense really played well and allowed the offense to get their feet under them and play a little better.”

Wawasee only ran 18 plays in the first half compared to 41 from Northridge.

“We have to get off the field on third down and get some stops,” Wawasee coach Jon Reutebuch said. “When they put together 13 play, 14 play drives, that not only wears out the defense, but a lot of those guys are also playing offense. So, couldn’t get anything going offensively. Seems like every time we had a break, we’d have a penalty or an injury, something going on.”

A third forced turnover to start the second half set up Northridge at the Wawasee 26-yard line. Lacey took over from there, gaining all 26 yards on three runs — capping it with a 12-yard touchdown run to make it 21-0 Raiders.

All 217 of Lacey’s rushing yards came in the first three quarters of the game.

Wawasee falls to 1-2 overall on the season and 0-1 in NLC play. They host Concord next week. Reutebuch, who’s in his first year as the head coach of Wawasee, knows it’s an uphill battle for his young team.

“It’s a culture change, and it’s going to be rough. We knew that going in,” Reutebuch said. “Sometimes you have to remind everybody we’re playing a lot of sophomores, playing first-year seniors. I’m not trying to make any excuses, but we’re trying to change a culture, and you don’t build Rome in a day. We know that. We understand what that is.

“The biggest message we’re trying to bring to our kids is keep giving effort every play and don’t give up. If you grade us on that, we didn’t give up. We played hard. Otherwise, we just have to keep improving and get better.”

Northridge improves to 3-0 and 1-0 in NLC action. They go on the road next week to face Plymouth.

“This is a conference where every single week is going to be one of those fights,” Wogomon said. “We’ve got to clean some things up and we have to make sure we’re locked in. We had a great week of practice this past week, and we have to repeat that.”