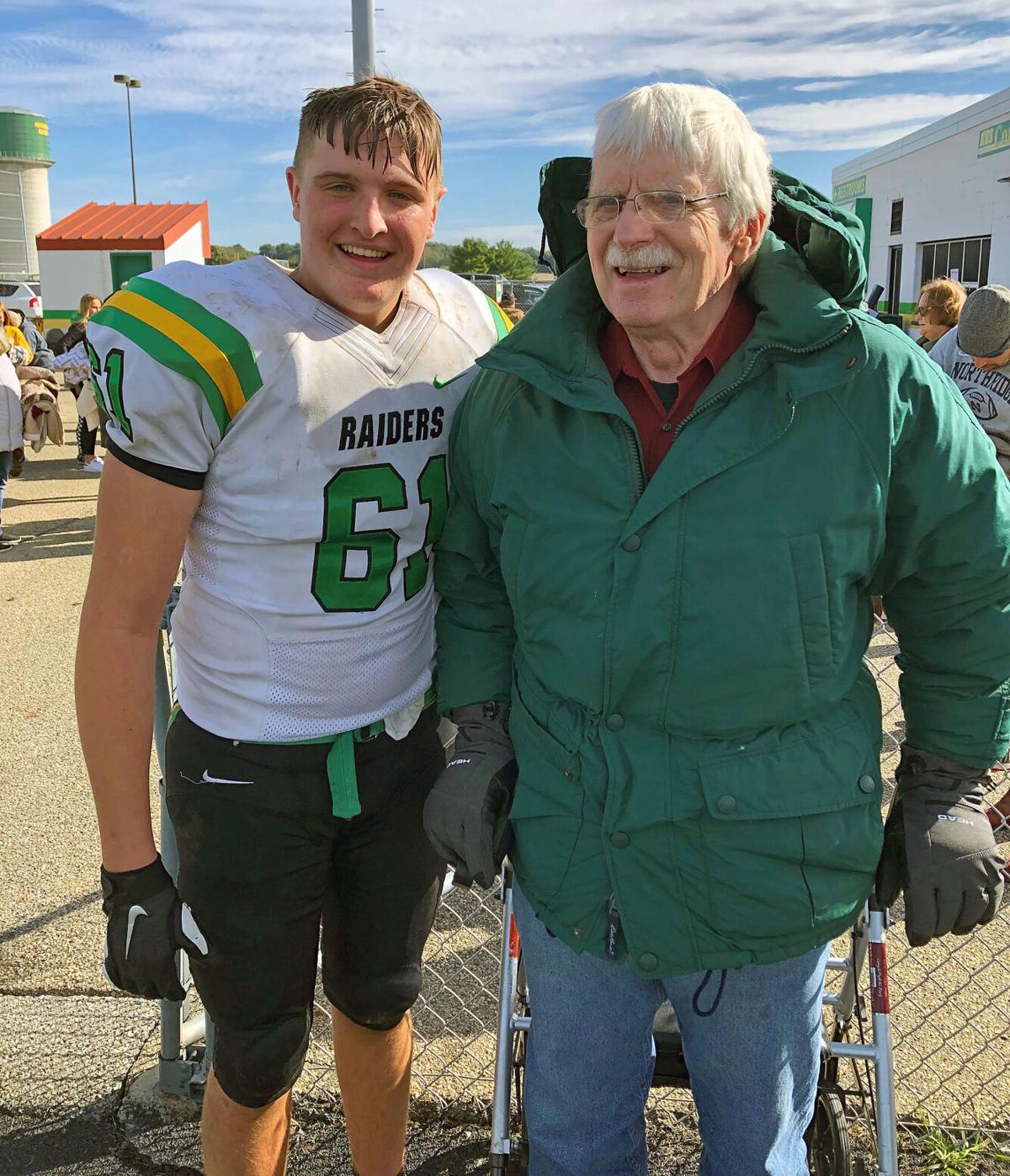 Evan Kaehr takes a photo with his grandfather, Bill Borne, following a football game in 2019. 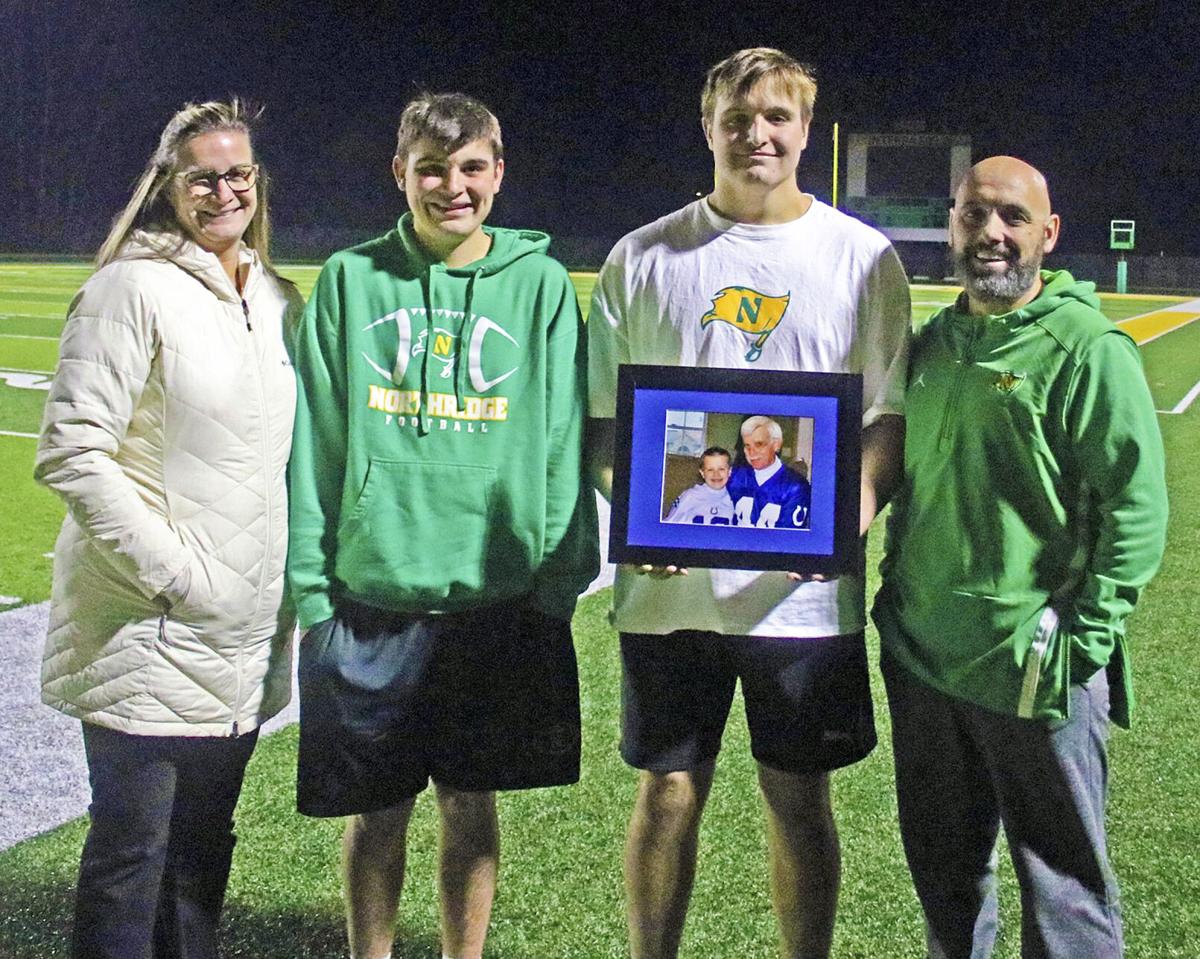 Members of the Kaehr family take a picture while holding a picture of Bill Borne on the Northridge High School football field. Pictured, from left, are Amber, Joah, Evan and Dustin Kaehr. Borne was Evan and Joah’s grandfather who passed away on Nov. 7 during the Raiders’ run to the state championship game. 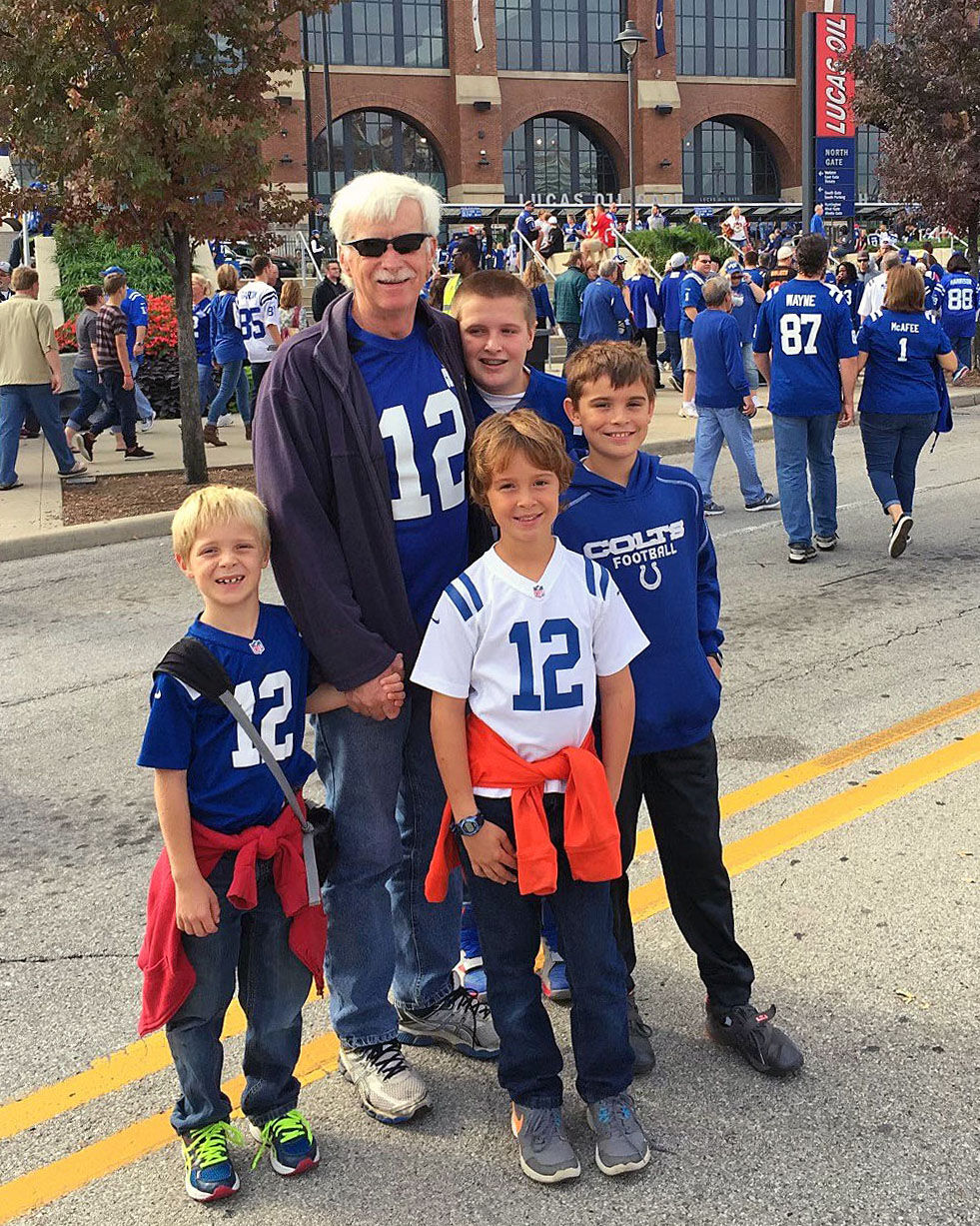 Bill Borne would take his grandsons to one Colts game every season, creating a tradition for Evan Kaehr and his younger brothers. 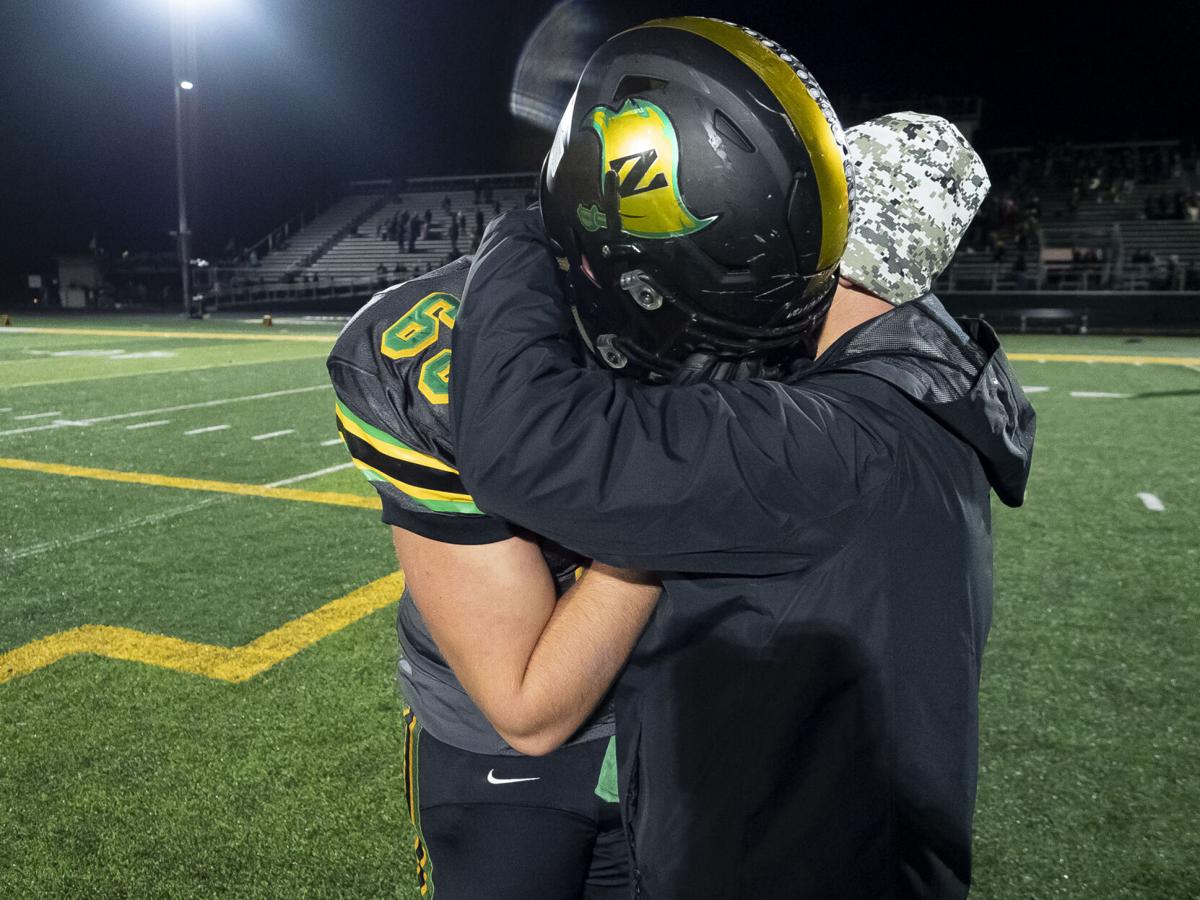 MIDDLEBURY — Evan Kaehr had done a good job of keeping his emotions bottled up all week.

But when the final whistle sounded and Northridge had won a regional championship, Kaehr knew he wasn’t going to be able to celebrate with the one person he had shared all of his wins and losses with: his grandfather, Bill Borne. The senior immediately burst into tears.

“That the whole week of not crying and not showing any emotion — it hit me because I was done with that game,” Kaehr said. “I remember shaking hands with the opponents, and I just lost it.”

Five days before the Raiders beat Mississinewa to advance to a Class 4A football semistate game, Borne died at the age of 70 from complications caused by progressive supranuclear palsy. A stroke in 2016 had affected Borne’s overall wellbeing, which led to his PSP diagnosis in 2018.

Kaehr was extremely close with his grandfather. It was a relationship that had blossomed when the COVID-19 pandemic changed the world as we know it.

Borne lived in Decatur, Indiana for most of his life. In 2019, though, his health was declining, and so Borne’s daughter, Amber, and her husband, Dustin, moved Borne to Middlebury to be close to his family. Amber and Dustin helped Borne with a lot of things, including driving. One of the main areas of the body that PSP attacks is the eyes, meaning Borne’s eyesight was deteriorating over time.

When the COVID-19 pandemic began in March 2020, all schooling was shifted to online-only. This meant Evan, a junior at the time, had a lot more free time since classes were taking up less than half the time they used to. With more time on his hands, this allowed Evan to visit his grandfather more often.

“I would drive over to his house and I would just sit and talk for hours every day,” Evan said. “We’d talk about maybe a Western movie he was watching. And he always had M&Ms on his top shelf because … he always had candy of some kind.”

Eventually, the whole Kaehr family would go visit Borne every Sunday and have pizza together, following COVID-19 protocols at all times by wearing masks and staying 6 feet apart. It was a weekly tradition the family partook in until Borne’s death.

“(Borne) always saw the commercial for the ‘Papadia’ (from Papa Johns), and he said he always wanted to try it,” Amber said. “And from that, every Sunday, it was Papa Johns. He always had a ‘Papadia’ with extra banana peppers. And then there’d be a new one, and he’d get a new ‘Papadia.’”

Borne’s health continued to get worse, to the point where he had to move into an assisted living community this past March. After a bad fall that left him with multiple injuries in July, Borne was put into a nursing center.

On Friday, Nov. 5, Northridge upset previously-unbeaten Leo to win the sectional championship. Two days later, the Kaehr family went and visited Borne at the nursing home. All three of Borne’s sisters were there, too, making it a larger gathering than normal.

Evan was able to tell his grandpa all about winning the sectional title. When they went to leave, Evan started to give his grandfather an elbow bump — something they had started to do when the pandemic began. Borne instead gave him a hug.

“That last day was the first and last time I hugged him since COVID began,” Evan said.

As the starting left tackle and a captain on the team, Evan knew he had to be there for his teammates leading up to the game against Mississinewa. He didn’t miss any practice time and did everything he could to not focus on the emotions of losing his grandfather.

“I had told myself the whole prior week to just not think about it,” Evan said. “So, I hadn’t really accepted the fact that I wasn’t going to go see him on Sunday to go talk to him about the game.”

After the victory over the Indians, though, Evan let all the emotions out. Dustin — who’s the quarterbacks coach for Northridge — immediately found his son, and the two hugged for minutes on the field.

“There really weren’t a whole lot of words spoken when we first embraced,” Dustin said. “He could put his head on top of my head, but he just bent over and there was just lots of crying. Then, there were a couple comments, like, ‘I can’t believe I’m not going to go be able to tell him about the game.’ We talked about how (Borne) is healed and he’s much better off, but he’d be so proud of him in the way he played.”

Northridge won its semistate game last week against New Prairie, sending the Raiders to the Class 4A state championship game this Saturday against Mount Vernon (Fortville). The game kicks-off at 3:30 p.m. at Lucas Oil Stadium in Indianapolis.

The venue for Saturday also means a lot to the Kaehr family. Every year, Borne would buy front row tickets for him, Dustin and Dustin’s four children — Evan, Joah, Owen and Liam — to go to an Indianapolis Colts home game. Countless memories were made from those trips, and now Evan gets to play on the same field where his dream of playing football began.

“What I found very cool was that (Borne) took them to their first Colts game … And now, in this season, Evan gets to play on that same field that his dream started at,” Amber said. “I find it to be very cool and something in a million years I would’ve never imagined.”

Amber knows the emotions her father would feel watching his grandson play at the home of the Colts on Saturday.

“He’d be proud,” Amber said. “From the time I was a little girl, he was a constant motivator. Everything was positive, positive, positive; there was never a negative. … I know, in my heart, the first words he would say if he was here would be, ‘I’m proud of you and I love you.’ And I can’t even imagine the excitement he’d have of knowing they’re at state.”

Evan has been able to use Borne’s passing as motivation for him the last two weeks. He looks to use that one more time as Northridge looks for its first football state title in school history.