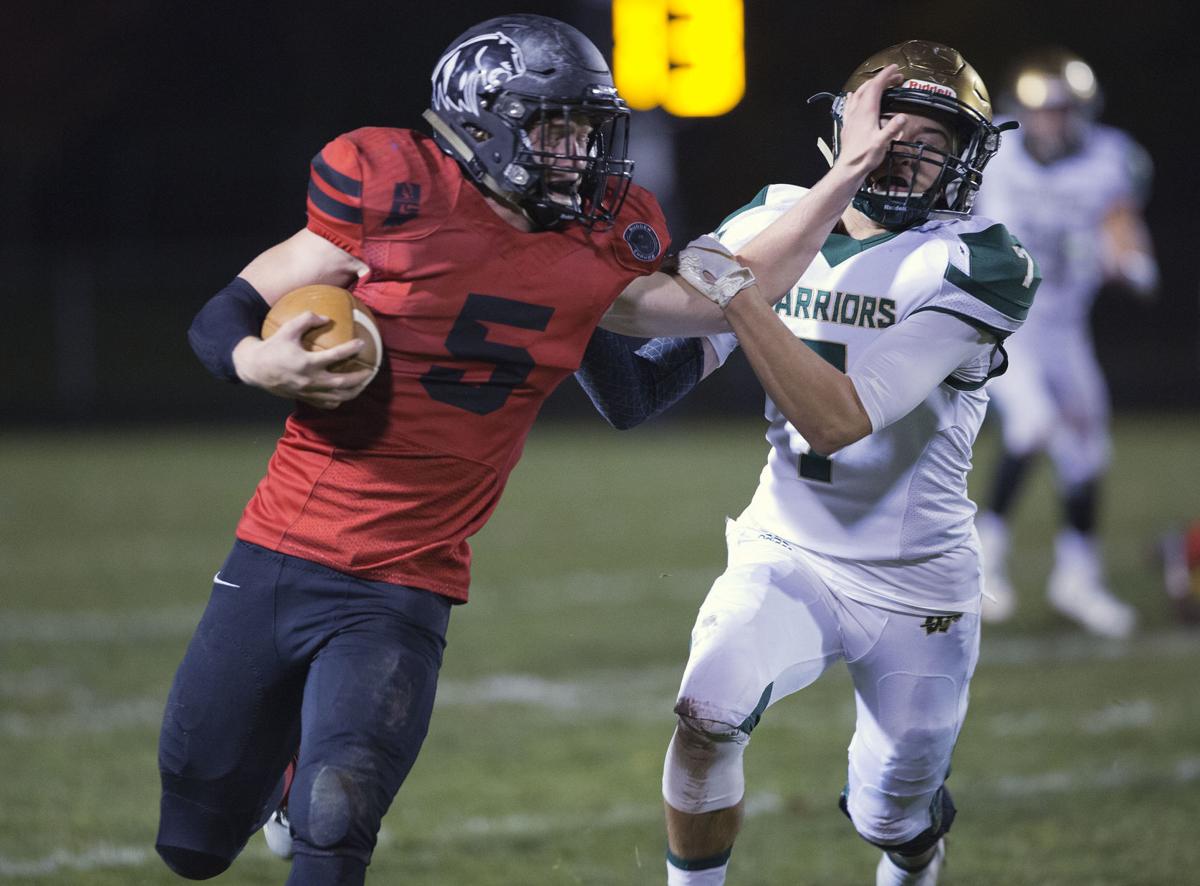 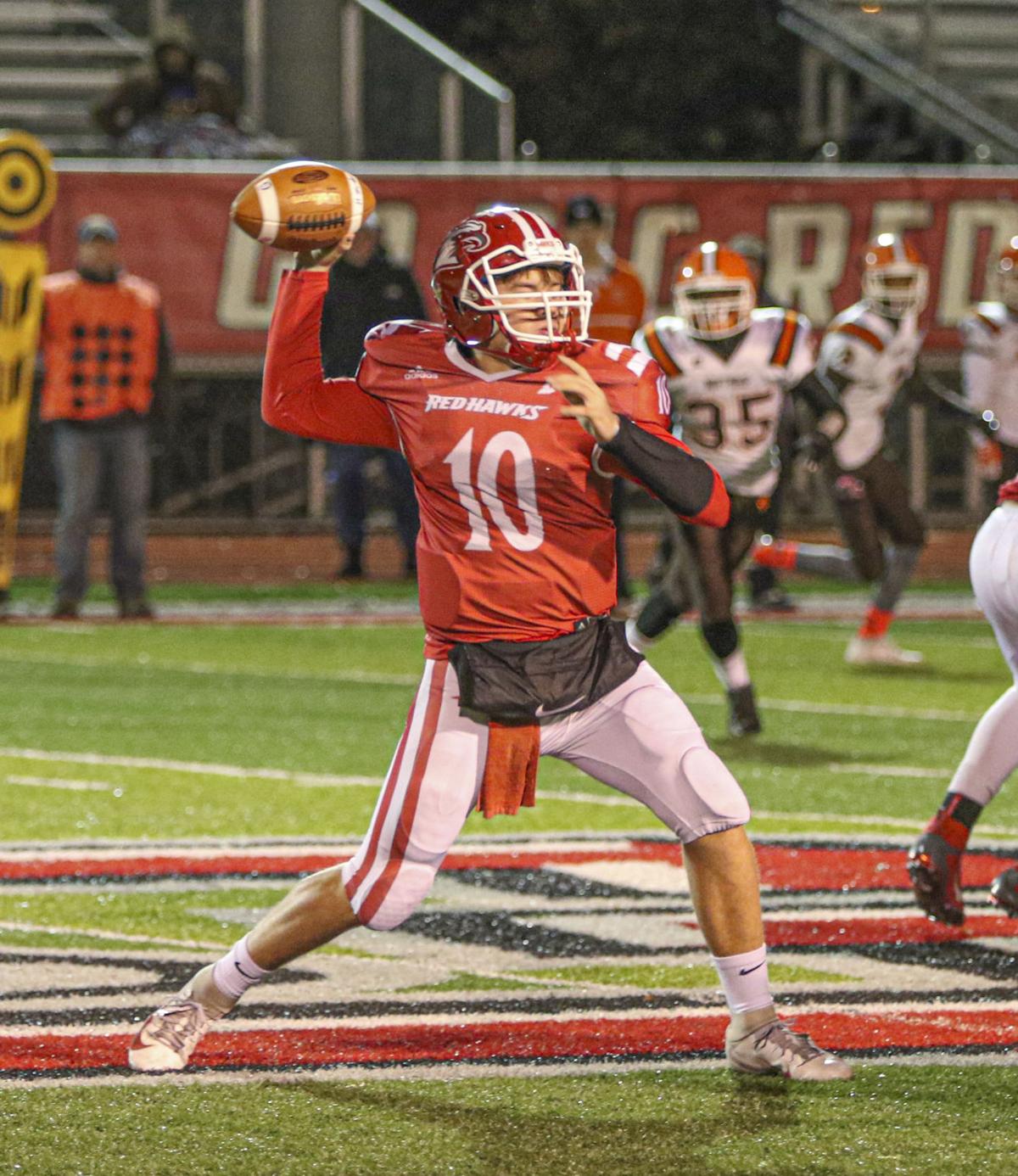 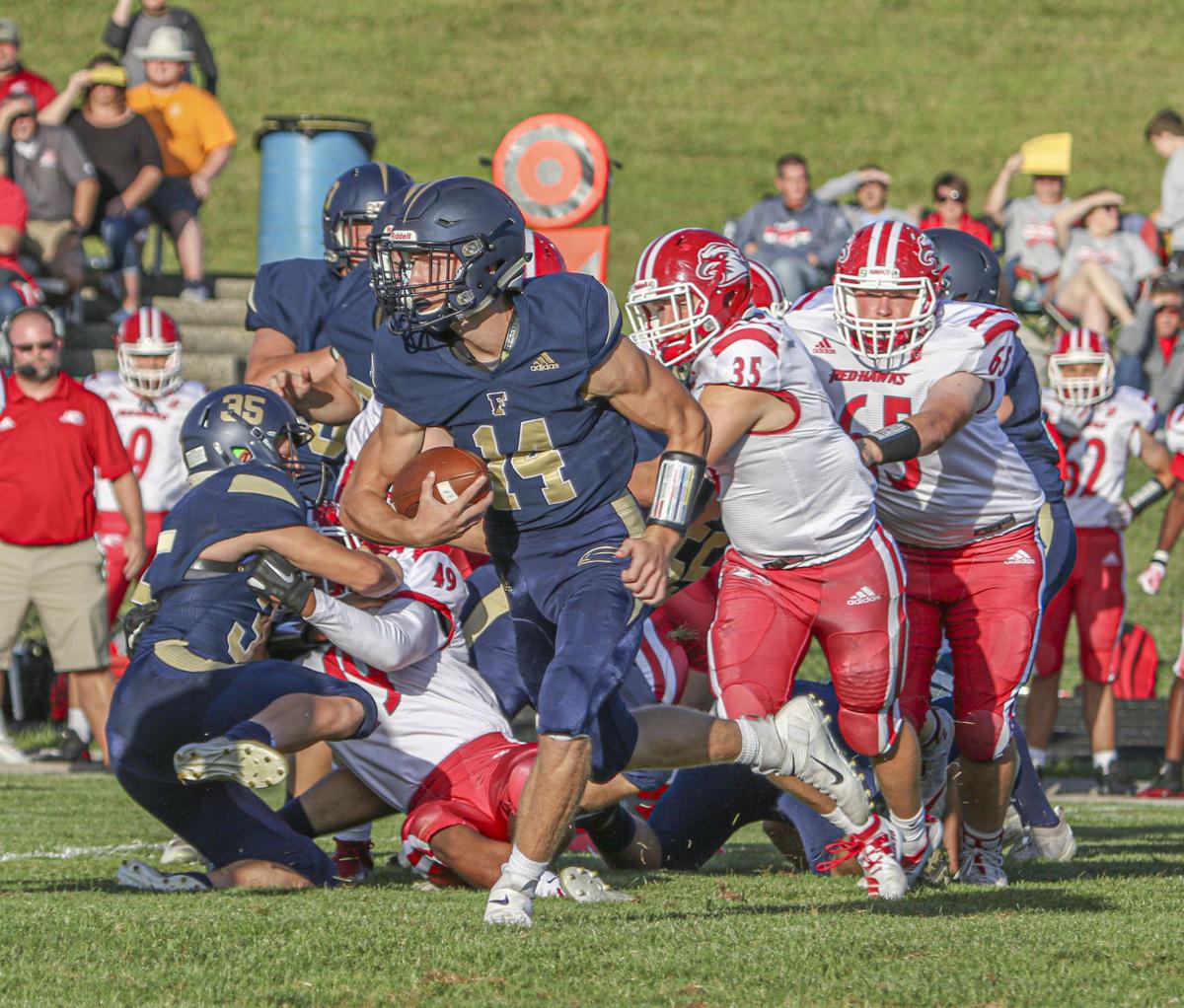 Fairfield High School junior quarterback Cory Lantz with the keeper in this file photo from the 2019 football season. 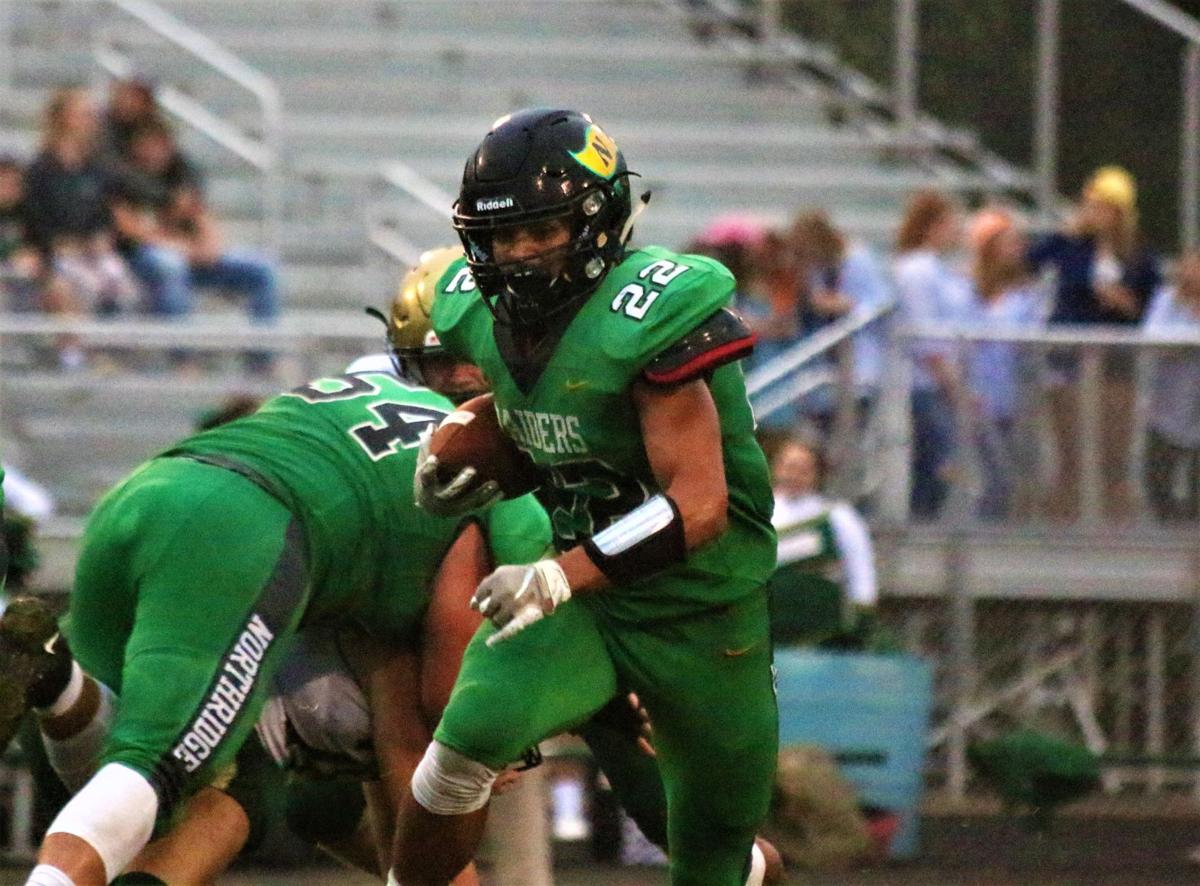 Northridge running back Caid Lacey (22) finds running room on his way to the end zone for his first touchdown of the evening against Wawasee in this file photo from the 2019 season.

Fairfield High School junior quarterback Cory Lantz with the keeper in this file photo from the 2019 football season.

Northridge running back Caid Lacey (22) finds running room on his way to the end zone for his first touchdown of the evening against Wawasee in this file photo from the 2019 season.

Could Indiana high school football switch from a fall sport to a spring one? Could it be a one-time change or a permanent move?

While there has been no official discussion in the Hoosier State about it, last week Michigan governor Gretchen Whitmer, during her coronavirus briefing, suggested the possibility that the Wolverine State could move the 2020 football season to the spring of 2021.

New Mexico announced Thursday evening it was moving its prep football and soccer seasons from the fall to the spring.

“There have been a lot of plans kicked around and this is one that makes some sense, however, from a football standpoint, I would not be in favor of it,” Goshen High School football coach Kyle Park said. “My biggest objection is it could not be a one-year change. It would have to be a permanent move.

“With all the safety issues we’ve had and the concussion protocol, you can’t expect kids to play a 2021 spring season, which if you went to the state finals might not end until June, and then turn around and play a fall season maybe six weeks later.”

The IHSAA canceled the boys state basketball tournament on March 19 and the entire spring sports schedule on April 2 due to the coronavirus pandemic. Athletes in all sports remained off-campus until this past Monday, when they were allowed to return for conditioning sessions while following all the social distancing protocol.

“My first thought is what would this do to the current spring sports,” Goshen Athletic Director Larry Kissinger said about moving the football season. “Those kids lost an entire season of competition. I don’t think you can move just football. If you do that and leave the other sports as they are, what about the football players that play baseball or the ones that run track? Then you are going to have to force them to choose between the two sports.”

As an AD, Kissinger is also concerned about the financial implications of moving or possibly not having a season at all.

“Canceling the season or having to play with no fans would be the two biggest problems,” he said. “At most schools, all-sport tickets, season tickets and individual game tickets from football and boys basketball are the two largest sources of income. We are holding off on the sale of all-sport tickets and season tickets until we have a better idea of what is going on. Playing games with no fans would be the worst-case scenario.”

Concord Athletic Director Dave Preheim has figured out when the football tourney would have to start should the sport be moved to the spring.

“To get the state tourney done in June around the time spring sports normally wrap up you would have to start the season on Friday, March 12,” he said. “Moving the season sounds good in theory, but there are a lot of questions that would be created.”

“Colleges have more flexibility when comes to moving sports,” Preheim said. “At that level, there are not as many multi-sport athletes to worry about.”

Concord football coach Craig Koehler would be in favor of the change.

“If it were up to me, I would make the change,” he said. “It would be best in the interest of our program and football in general. The problem is our sport, probably more than any other, is conducive to spreading the virus. I don’t see it as a permanent fix. It’s a change to allow the kids a chance to compete. If we get the virus under control we could go back.”

Koehler agrees there could be problems with multiple sport athletes.

“We have several Concord football players that play baseball. Our quarterback is missing some of our early workouts because he is playing baseball,” the coach said. “The basic thing is you are going to have to flip the entire fall and spring sports schedule to make it work.”

“I think it’s so late in the game right now,” the coach said. “If they were to flip spring sports, I just think it would be so hard for the spring sports to move forward and get started soon enough to be able to get their seasons off and running when you need to. I think if you flip football into the spring, obviously we would have a lot more time to prepare.

“One thing I do not like about it is when our season would get done — let’s say you have a good playoff run and you get done in June. Then, you’re kicking off the 2021 year about a week later in preparation for that fall. So, for the kids that would be seniors, that’d be a great thing and a way for them to be able to get their season in. But for the coaches and the underclassmen, they’d be looking at going in right from a spring football season into a fall season to get back into normalcy. I just think that’d be awfully rough; that’d be a tall task.

Wogomon concluded, “It’s just a demanding sport. When you get done with a football season, everyone’s got the aches and pains and things that they just need to get away from the physicality that takes place. And then go into another season two weeks later? That would just be a tall task.”

The coach also shared how playing football in the spring would affect things.

“There’d be so many things that would have to be answered, like how do you recruit? The recruiting aspect of a kid wanting to go to college football — they want to get that signed, sealed and delivered before the 1st of the year, and the kid’s not even able to showcase his senior year until the spring.

“There’d be a whole lot of things before that’d need to be asked, and that’s why I’d be very surprised if the state of Indiana would look at that type of proposal. It’d be interesting to see if Michigan could make a flip so quickly before the start of the fall camp.

“I’d be really surprised if Michigan could do it, but I’m never going to say never anymore from what all has transpired over the last five months.”

“Are you going to start it the first week of April and then go nine weeks? It takes 16 weeks, counting the scrimmage, to get to the state championship. Well, that’s four months, and if you’re starting in the middle of March, it’s not going to be great weather to start in the middle of March,” Harms said. “And then you’re talking, are you going to flip it back the next year? Are those kids going to have four weeks to get ready for the following season?”

There are problems with flipping the fall and spring schedules.

“If we had to do it, we would do it, but I would need to know which sports we were flipping. You almost have to flip them all. You just can’t flip part because then you’re going to screw up the opportunity for kids to play,” Harms said. “It’s pretty well-balanced, so you almost have to move them all. You say, OK, the eight fall sports go to the spring and the six spring sports go to the fall. I think that would be the only way that you could do it. It would be a logistical nightmare, but we could adjust and we could get it done.”

NorthWood football coach Nate Andrews shared there has been a little discussion about the subject.

“My understanding is that there has been a little discussion,” the coach said. “Those involved in the decision will make the best one. It seems it could work, but the biggest thing is it needs to be right for all sports for it to be a success. There seems to be more social distancing in spring sports than fall sports.

Cory Schutz, Wawasee Athletic Director, shared the ADs in the Northern Lakes Conference have at least approached the subject.

“As a group, we have been meeting via Zoom every Friday since this started back in March,” he said. “If you just flip football that throws a wrench in the whole situation. Football in the spring would create a problem for track and field.

“One problem with moving football to the spring is, to get the state tournament done in June, you would have to start the season in March. You can have some pretty brutal days early in the spring.”

Greg Keim and Austin Hough can be reached at sports@goshennews.com. Follow Greg on Twitter at @gkeim_TGN and Austin at @AustinHoughTGN.

Greg Keim and Austin Hough can be reached at sports@goshennews.com. Follow Greg on Twitter at @gkeim_TGN and Austin at @AustinHoughTGN.