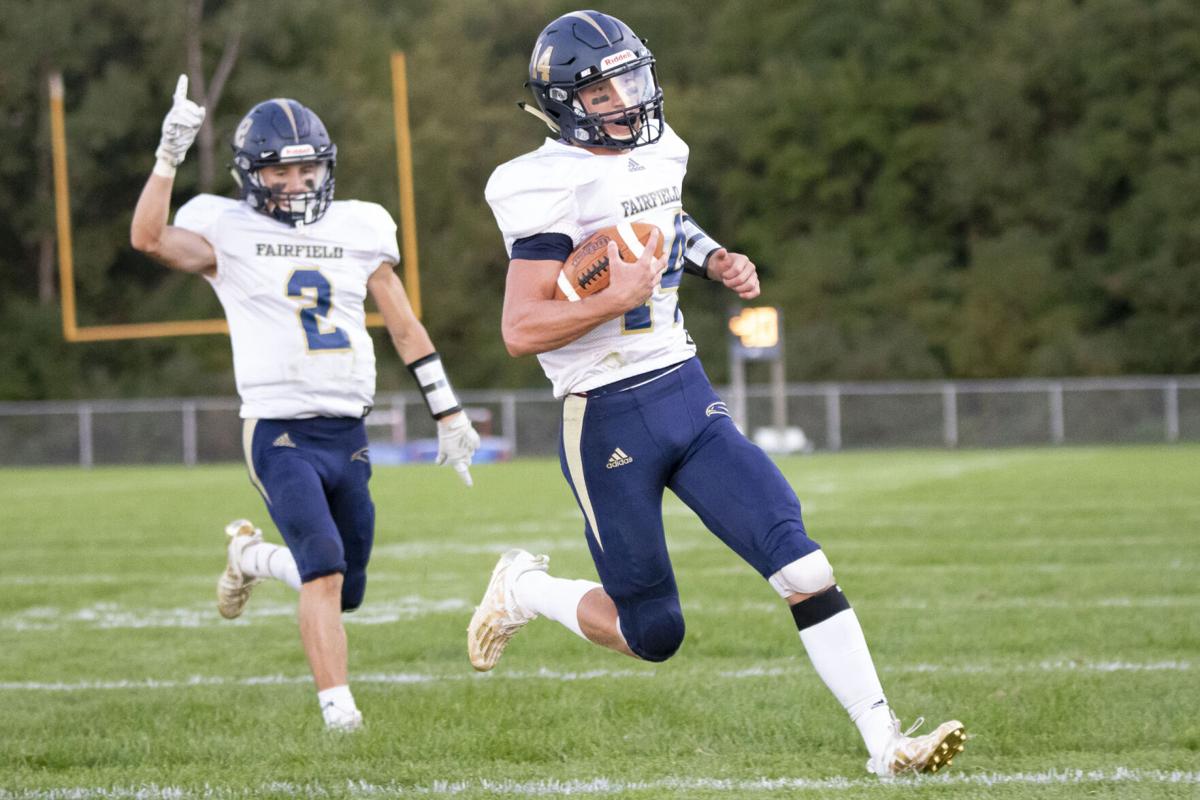 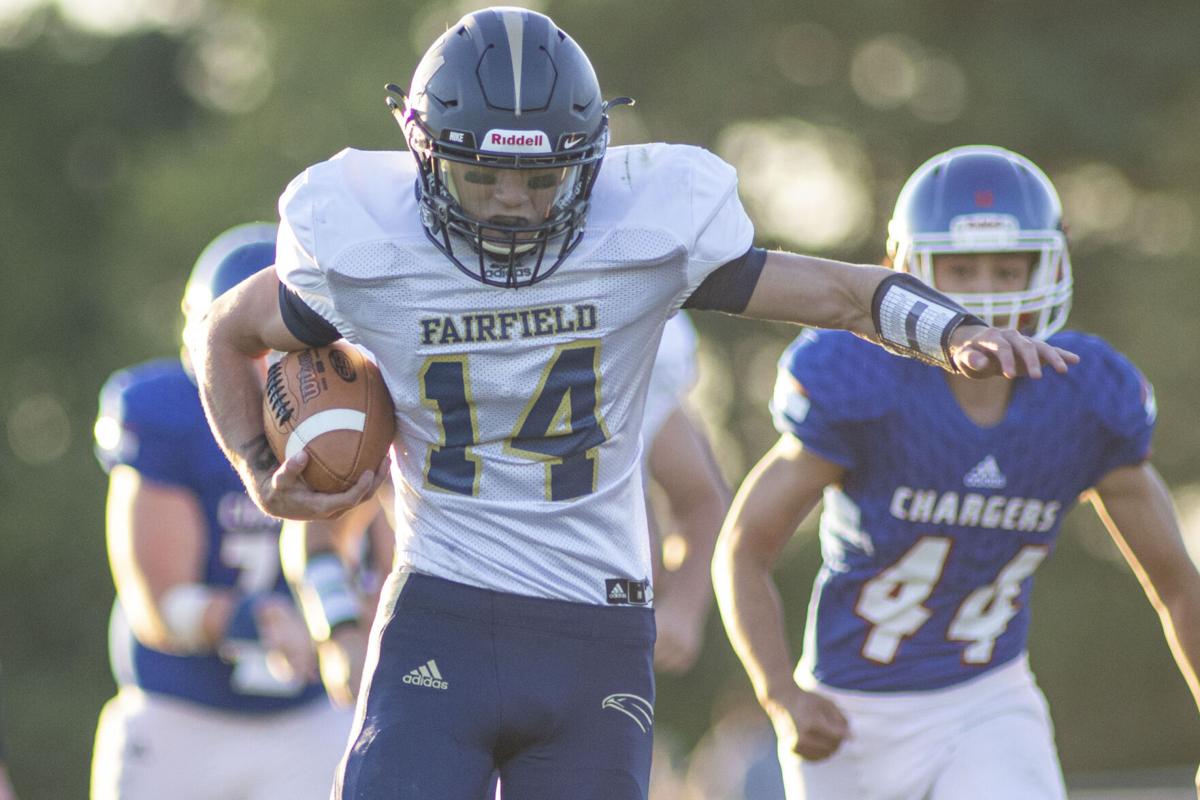 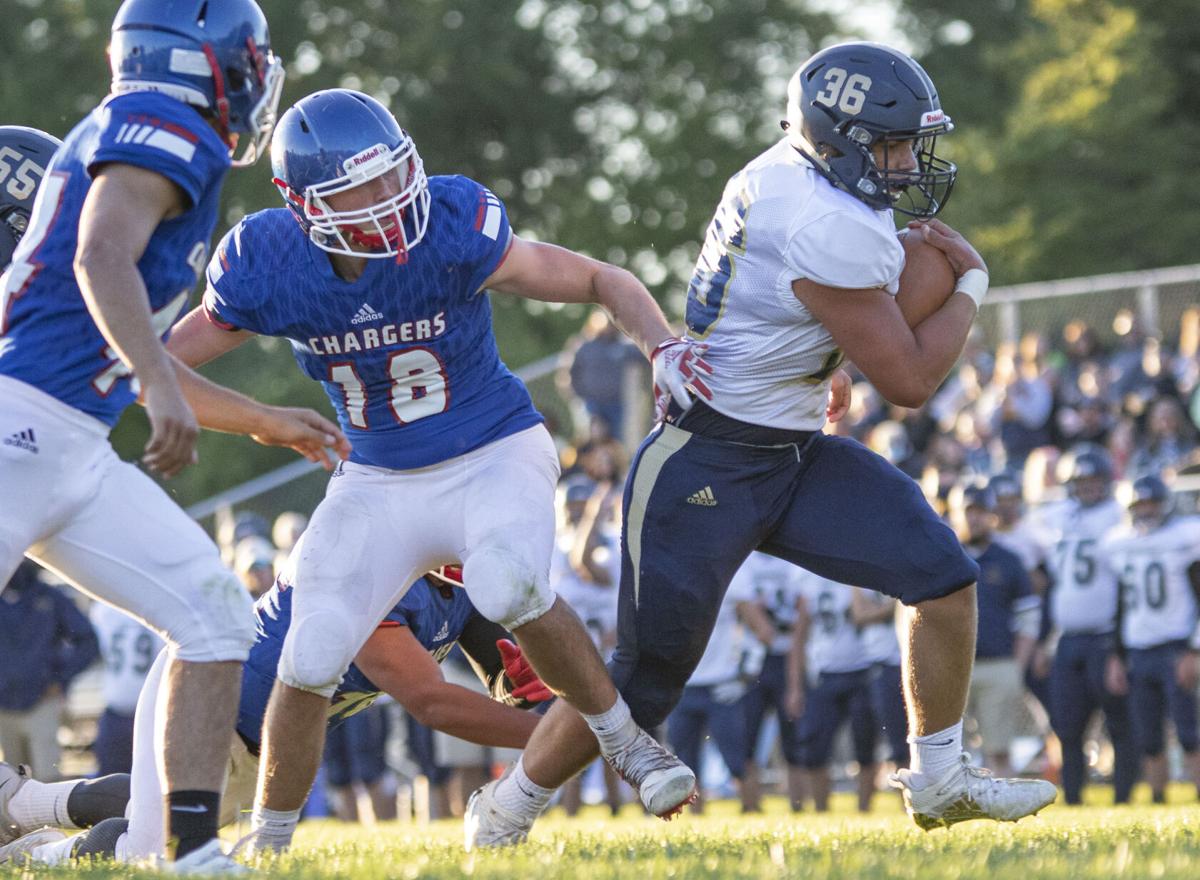 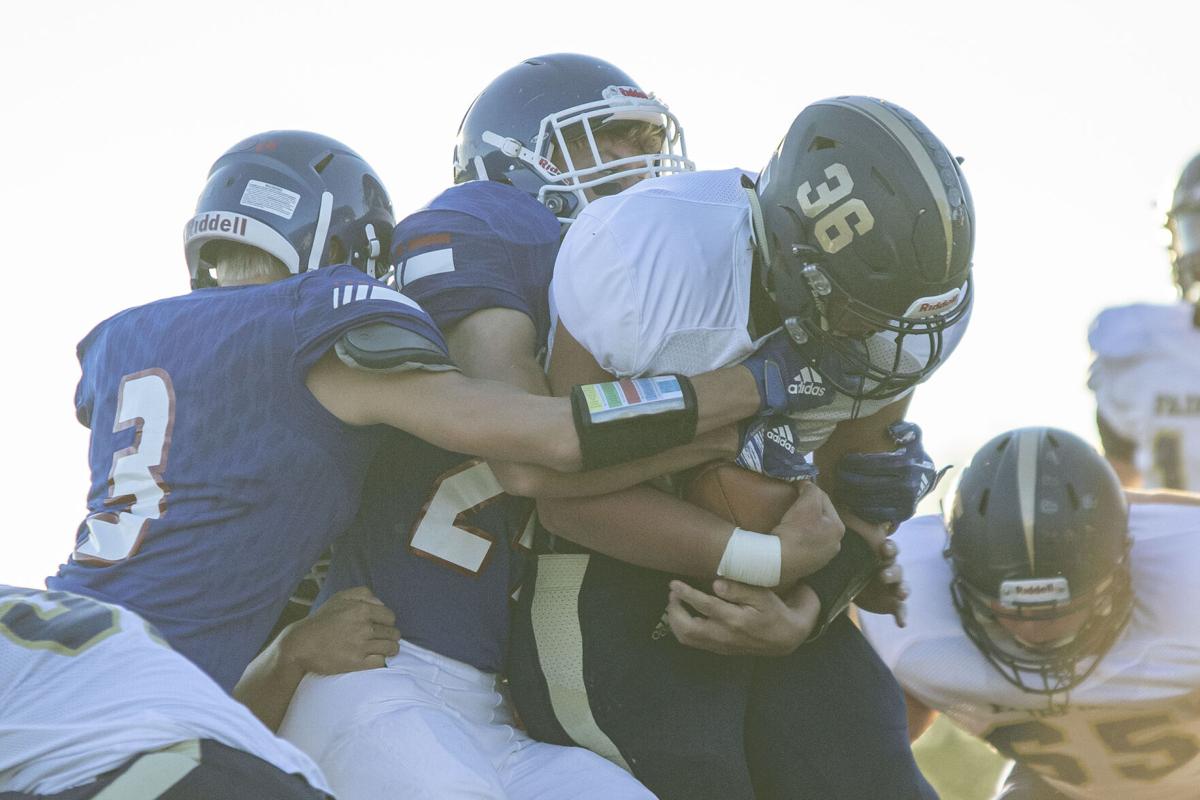 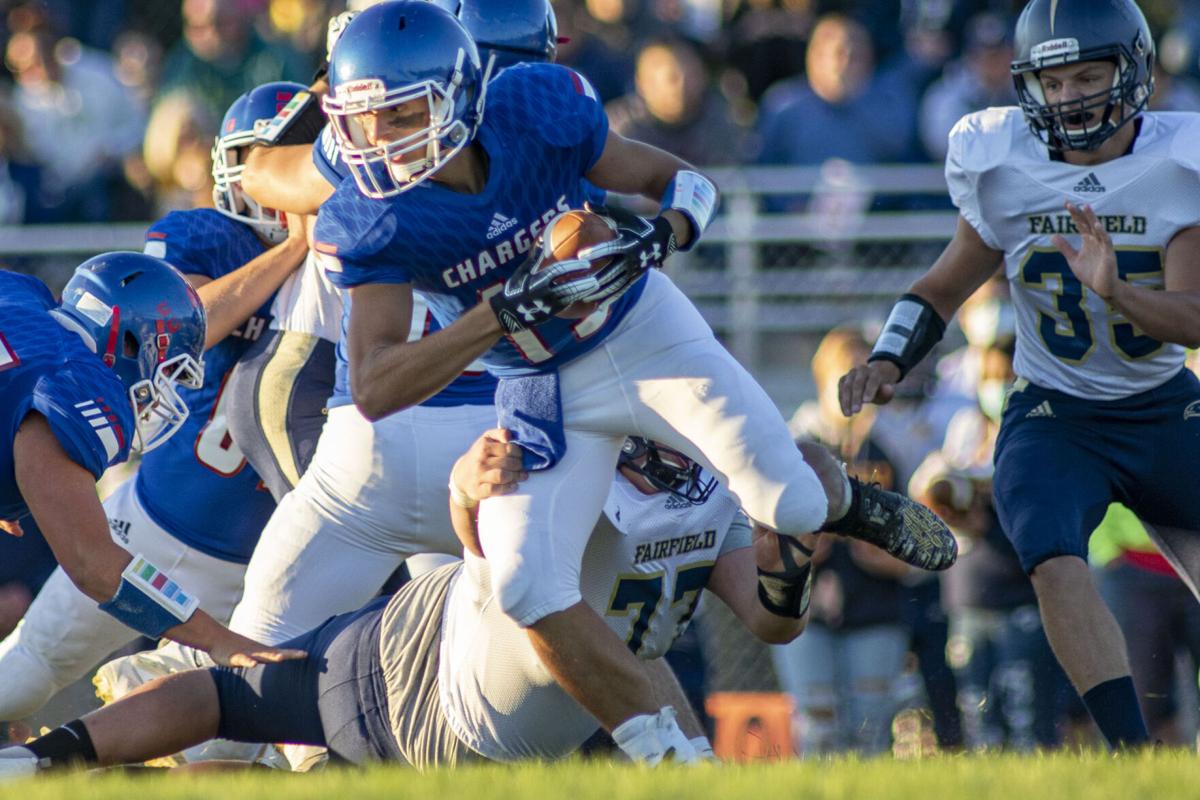 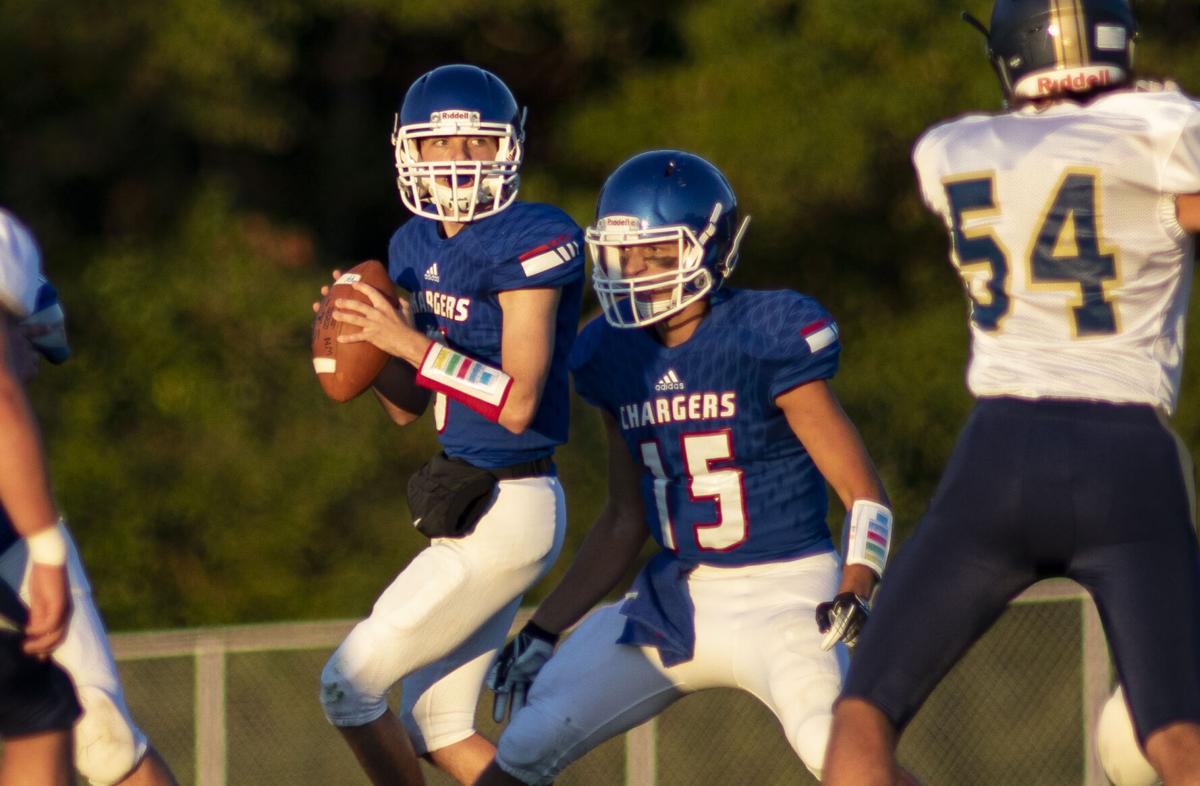 West Noble's Derek Slone (5) drops back to pass the ball to his teammate during Friday's game at West Noble High School in Ligonier. 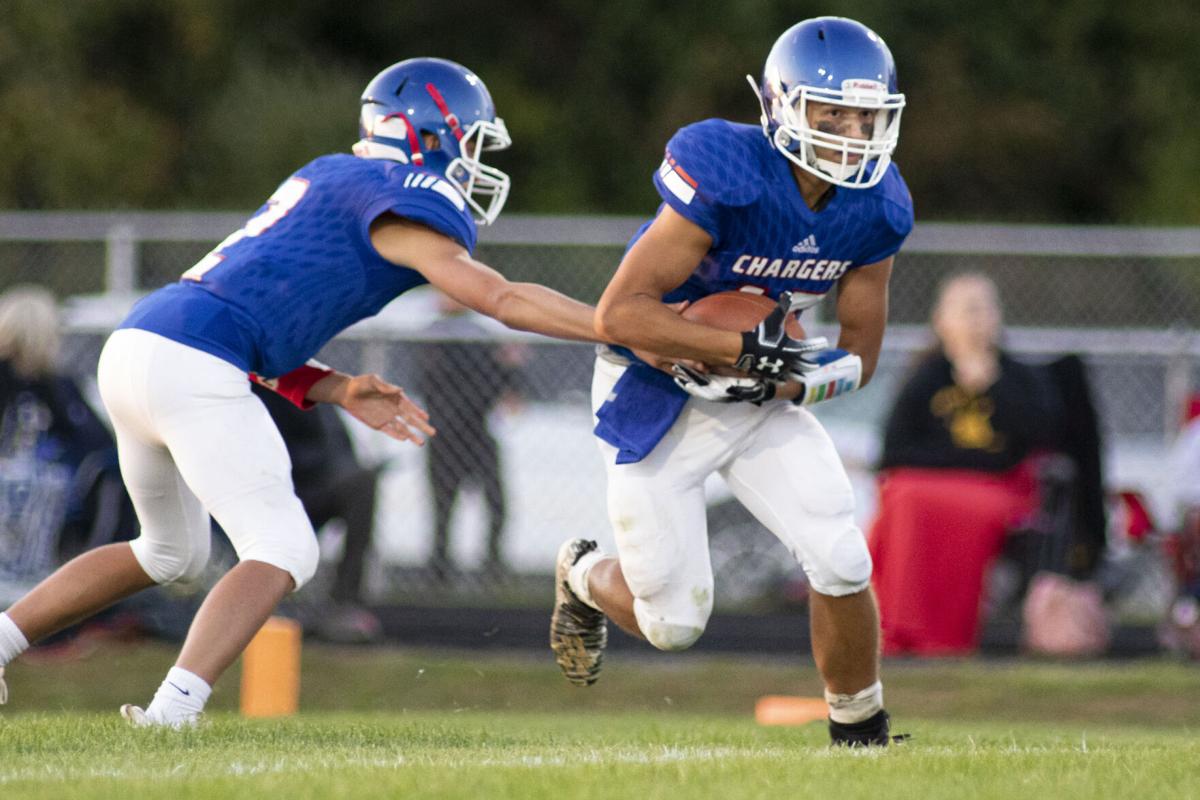 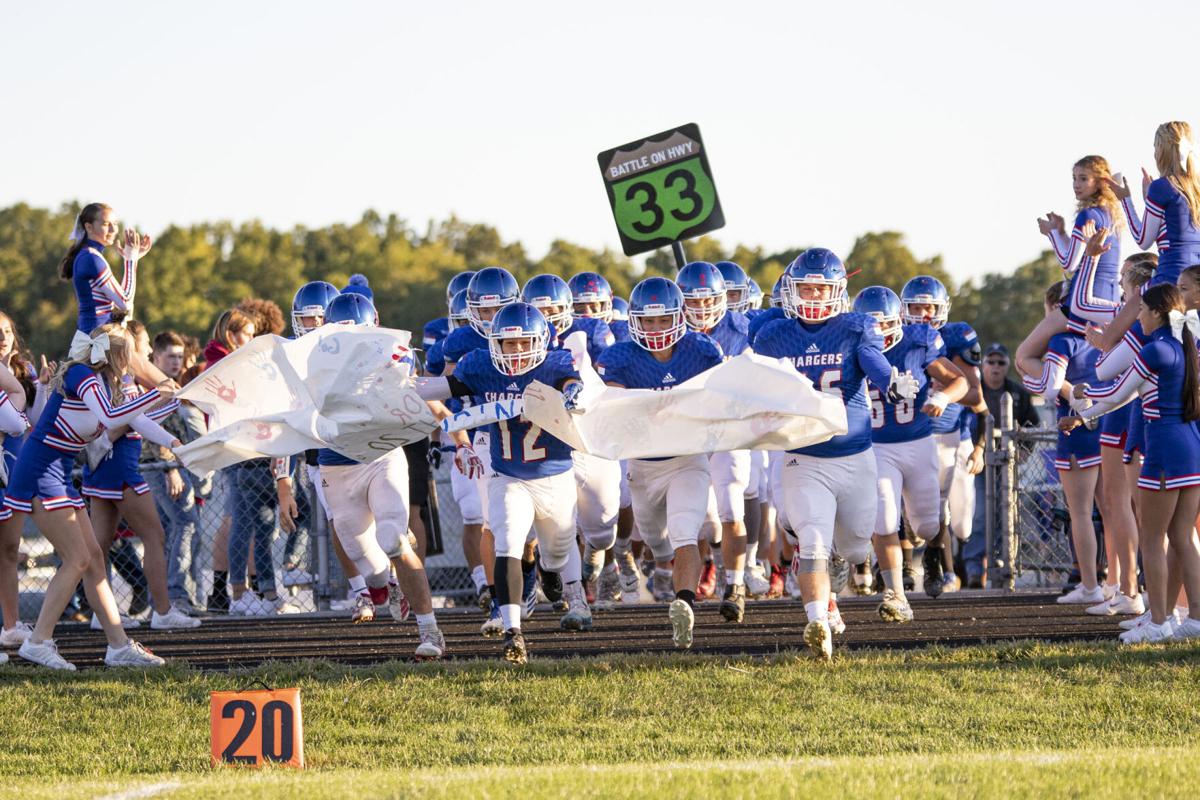 West Noble's Jose Cervantes (12) leads his teammates out on the field before the game Friday at West Noble High School in Ligonier.

West Noble's Derek Slone (5) drops back to pass the ball to his teammate during Friday's game at West Noble High School in Ligonier.

West Noble's Jose Cervantes (12) leads his teammates out on the field before the game Friday at West Noble High School in Ligonier.

LIGONIER — There was something about fourth downs that the Fairfield football team loved Friday night against West Noble.

Three of the first four touchdowns for the Falcons came on the down — two offensively and one defensively — as Fairfield cruised past the Chargers, 41-6, in Northeast Corner Conference action Friday night.

“I think we were 100% on fourth down,” Fairfield coach Matt Thacker said. “That’s kind of what we do. First down, as long as we have an efficient play, we get to second-and-efficient, we get third-and-short and that can give us fourth-and-short. That’s just what our offense does and that’s what position our offense puts us in.”

The Falcons run a triple-option offense, which emphasizes the run. They did it effectively Friday, rushing for 267 yards as a team.

“We just didn’t play well,” West Noble coach Monte Mawhorter said. “We had some kids that had to make some plays, and we didn’t make them.”

Fairfield scored its first touchdown on a fourth down following the first of its three first-half turnovers. Falcon senior Dalton Cripe intercepted a Charger pass on the third play of the game, running it back to the West Noble 14-yard line. On a fourth-and-seven from the Charger seven, senior Carson Abramson took a handoff and plunged into the end zone for a touchdown. The two-point conversion was missed, making it 6-0 Falcons.

Less than three minutes later, senior quarterback Cory Lantz took over. He ran all 54 yards on the drive, finishing it with a 33-yard scamper. Sophomore Brock Short added the two-point conversion to make it 14-0 with 6:25 to go in the first quarter.

Lantz would finish the game with 140 rushing yards and four touchdowns.

“He’s kind of getting it,” said Thacker of Lantz’s performance. “We have to keep him healthy, but he’s seeing stuff before it actually happens. He actually has started to call more of the plays at the line, which as a coach, you want someone that can say, ‘Hey, I can read this and we’re going there.’ It worked pretty much to perfection. Very proud of his progress from two years to now.”

Fairfield’s next score came on a fourth down, but this one on the defensive side of the ball. Facing a fourth-and-three at their own 41-yard line, West Noble attempted to throw the ball for the first down. The pass was picked off by Fairfield senior Nathan Klinedinst, though, at the 45-yard line and ran back for a touchdown. Lantz added a two-point run to make it 22-0 Falcons.

Thacker said a point of emphasis lately has been better cornerback play, and it showed with three interceptions in the first half.

“That’s been a focus: getting better, focusing on our technique, focusing on our fundamentals there,” Thacker said. “That’s great to see. That shows that the effort we’ve put in during practice has paid off during the game.”

Lantz’s second score of the game came on a fourth-and-one at the nine-yard line. He faked the handoff inside and bounced the run outside, scoring virtually untouched. The two-point conversion attempt failed, but Fairfield was up 28-0 with 3:27 left in the half.

West Noble mounted its first serious scoring threat at the end of the first half behind the arm of freshman quarterback Drew Yates. He completed two passes to senior Hunter Foreman, setting up one last play at the Falcon 37-yard line with 0.5 seconds left in the half.

Unfortunately for the Chargers, Yates’ final pass of the half was intercepted by Klinedinst. Despite the interception, Mawhorter liked what he saw from the freshman quarterback.

“I thought he played well; I thought he threw the ball well,” Mawhorter said. “He’s done really well on the JV level, so he’s probably going to get a look.”

Lantz’s final two touchdowns came on back-to-back scoring drives in the third quarter, both of 13 yards at 8:29 and 3:40 of the quarter, respectively, to put Fairfield up 41-0.

West Noble’s lone touchdown came on the ensuing kickoff, as senior Hunter Foreman ran it back 93 yards for a score. The extra point was missed.

Since Fairfield went up 35 points, the final 15 minutes of the game was played under a running clock.

West Noble (0-5, 0-2) will host Garrett next week. The Chargers are playing a lot of young players this season, and Mawhorter hopes the experience this year will translate to success in the future. He used Fairfield under Thacker as an example of what he hopes his program can do in the next few seasons.

“Fairfield is a good example: two years ago, they were horrendous. Maybe the worst team I’ve ever seen,” said Mawhorter, citing the 2018 season for Fairfield that saw them go 0-9 and be outscored 493-27 in those games. “Those same kids have worked at it and they’ve come back, and when you see them as seniors, I’m glad they’re having success. Hopefully that’s us in a couple years.”

Fairfield is 4-0 and 1-0 in NECC play. They’ve already matched last year’s regular season win total with four games remaining in the season. They have a big test next week as they travel to Angola (3-0, 2-0 NECC) in a game that could decide the NECC Big Division champion.

“We’ll enjoy the bus ride home (Friday night), and we’ll think about Angola (Saturday),” Thacker said. “Angola is Angola: they will be physical, they will run the ball, they will play physical, hard-nosed defense. We’ve got to take it one play at a time and one day at a time in practice.”