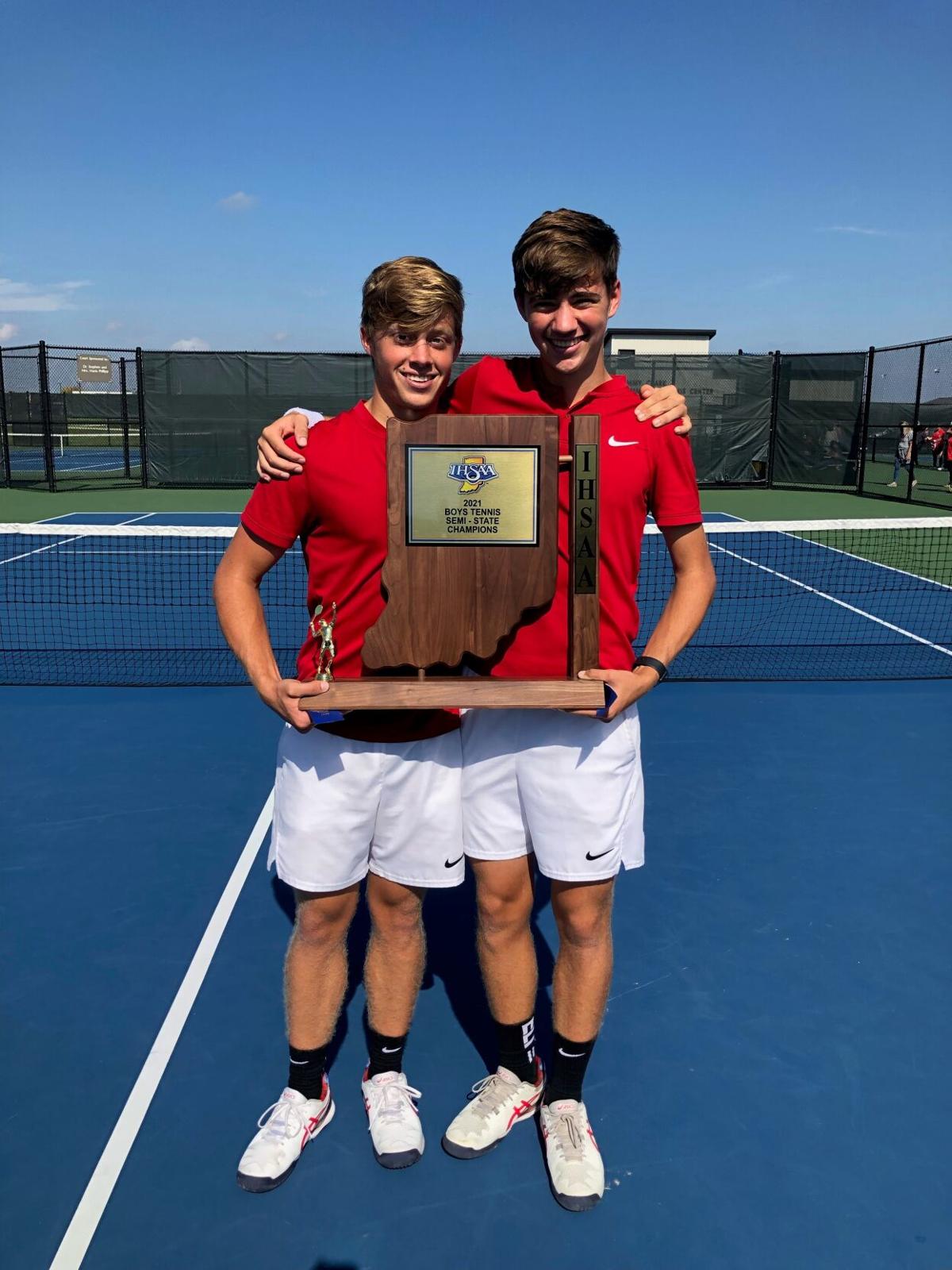 Westview tennis players Elijah, left, and Isaiah Hostetler pose with the semistate championship trophy this past Saturday at Homestead High School in Fort Wayne. The senior and junior brothers, respectively, have been the top two singles players for Westview all season. 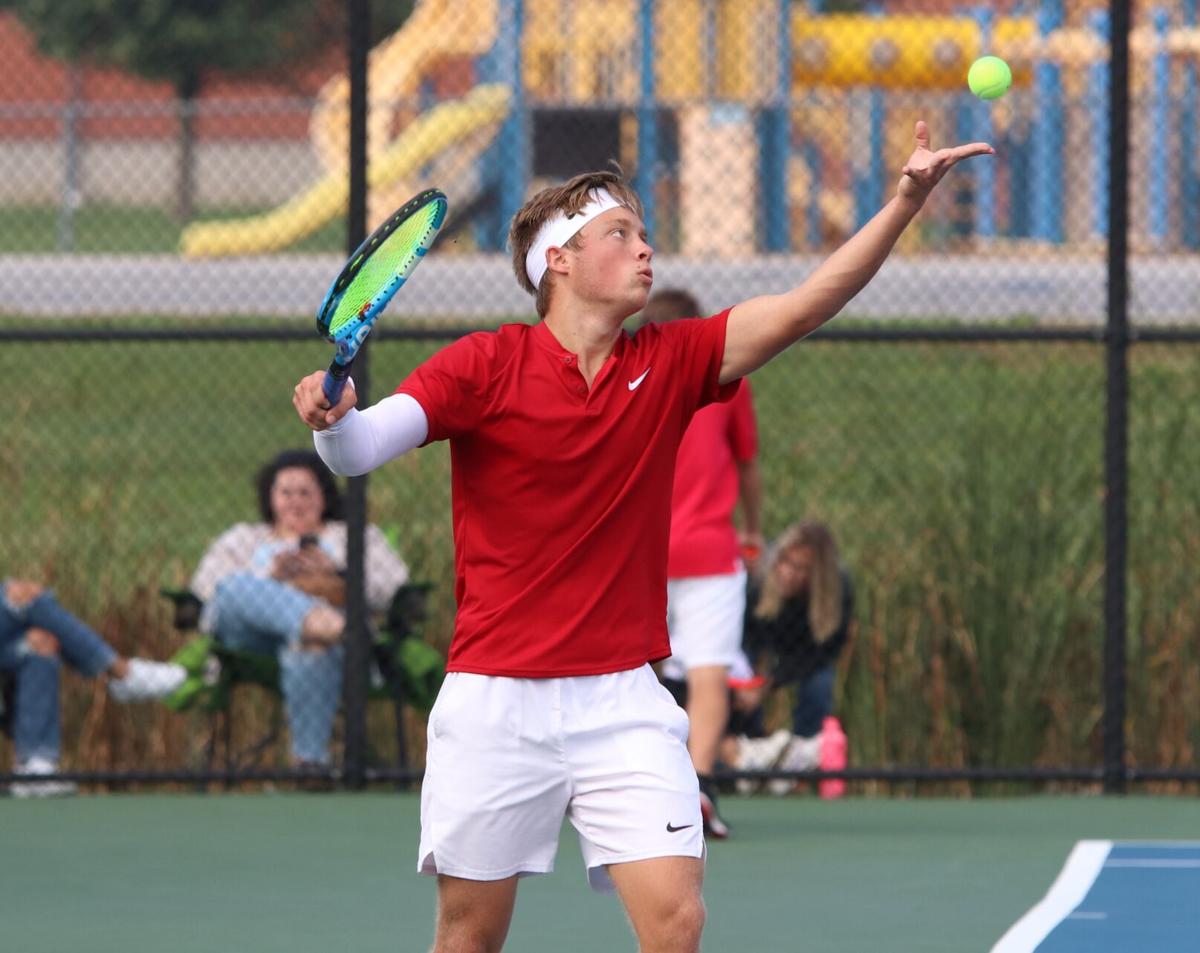 Westview senior Elijah Hostetler goes to serve the ball during his No. 2 singles semistate match against Mississinewa this past Saturday at Homestead High School in Fort Wayne. 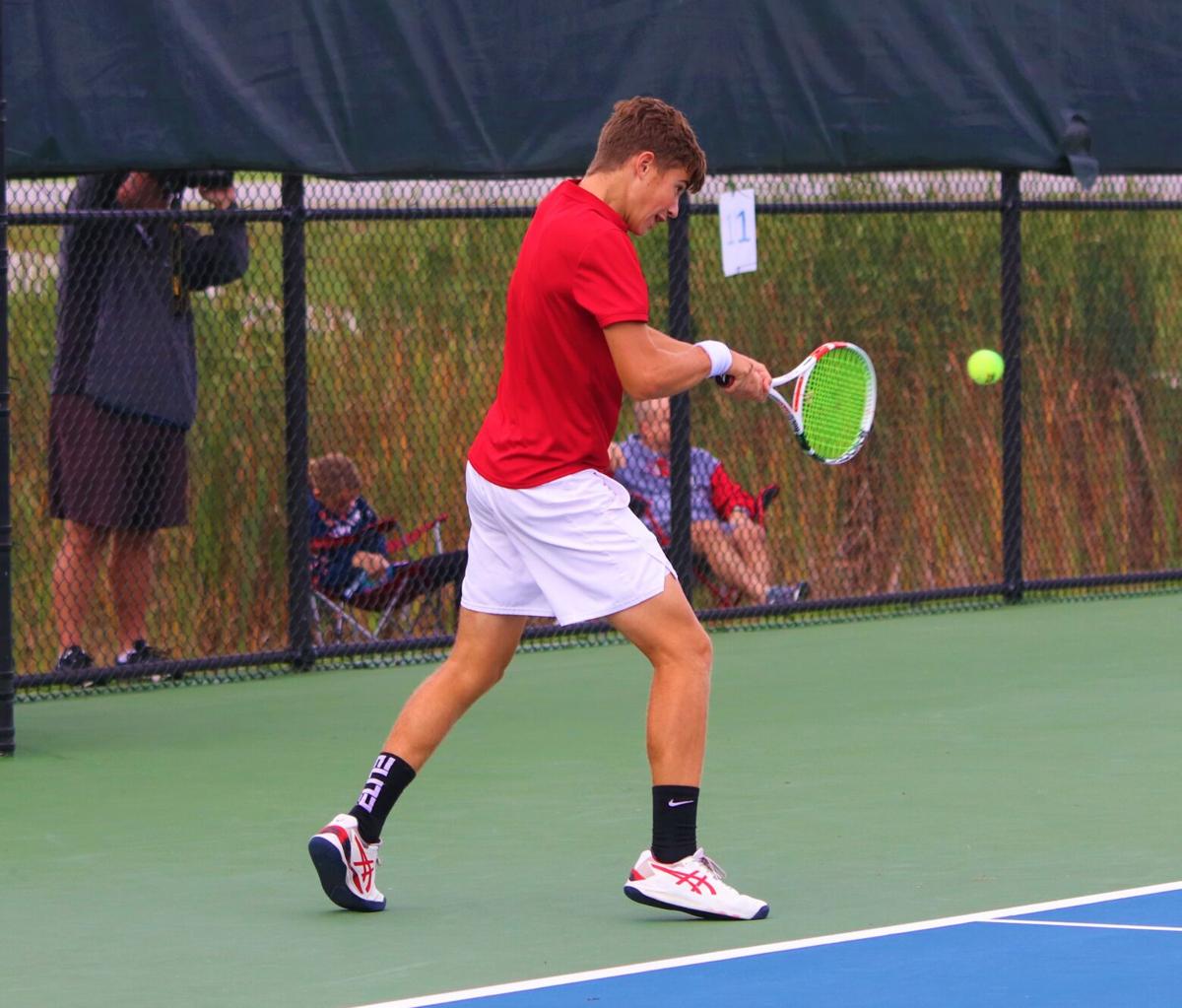 Westview junior Isaiah Hostetler hits a forehand shot during his No. 1 singles semistate match against Mississinewa this past Saturday at Homestead High School in Fort Wayne.

Westview tennis players Elijah, left, and Isaiah Hostetler pose with the semistate championship trophy this past Saturday at Homestead High School in Fort Wayne. The senior and junior brothers, respectively, have been the top two singles players for Westview all season.

Westview senior Elijah Hostetler goes to serve the ball during his No. 2 singles semistate match against Mississinewa this past Saturday at Homestead High School in Fort Wayne.

Westview junior Isaiah Hostetler hits a forehand shot during his No. 1 singles semistate match against Mississinewa this past Saturday at Homestead High School in Fort Wayne.

TOPEKA — As a kid, Isaiah Hostetler hated playing tennis. Now, he and his older brother, Elijah, are leading the Westview boys tennis team to its second state tournament appearance in three seasons.

Junior Isaiah and senior Elijah are the No. 1 and No. 2 singles players, respectively, for the No. 16 Warriors. They will be competing at those spots Friday when Westview plays No. 12 Jasper in the state quarterfinals at noon at Center Grove High School in Indianapolis.

“I’m too competitive to the point where I’d rather not play the game if I knew I was going to lose,” said Isaiah of why he didn’t like tennis when he was a child. “So, Elijah would beat me a lot of the times when we first started going out and hitting. I remember I’d get really frustrated that I couldn’t keep the ball in when it seemed like it should be easy.

“I also really loved reading at the time, so a lot of times I’d rather just want to read inside than go outside and play tennis.”

The two brothers began playing at a young age, mostly due to their father, Marion. Their dad played tennis in high school and passed along the love of the sport to his kids.

“Once he had us, he always wanted us to go out there and hit, so as we started growing up, he would take us out to hit,” Elijah said. “And so, we started getting into it.”

Eventually, both Isaiah and Elijah started getting better at the sport. Both brothers said they noticed that they were good at tennis during a junior high tournament in Angola when they played well against players from schools such as Homestead and Leo.

“The season of junior high kind of showed us we could be really good because we barely ever lost,” Isaiah said. “My eighth-grade year, I didn’t lose a single match, so that’s when I kind of realized, ‘Man, I can be kind of good at this sport.’”

Both brothers were at the school in 2019, with Elijah being a sophomore and Isaiah a freshman. That season, Elijah was on the No. 1 doubles team with junior Tim Brandenberger. Meanwhile, Isaiah was slotted into the No. 3 singles spot.

Powered by strong play at all five positions, Westview went 25-0 en route to a semistate title and the program’s first state tournament appearance. It would lose to No. 2 Columbus North in the state quarterfinals to bring its season to an end with a 25-1 record, but it was still the most successful season in the program’s history up to that point.

Isaiah remembers there being a different buzz surrounding his match when he was at state two seasons ago.

“Playing down at state, it was such a big atmosphere; like the atmosphere changed,” Isaiah said. “It was so much more important. I remember playing at the 3-singles spot and it just felt a little more tense and super important, which makes sense.”

After another regional title in 2020, both Hostetler’s went to work on improving their games even more during the offseason. At this point, Elijah had noticed that his brother had passed him in terms of skill on the tennis court. After years of older brother being better than younger brother, the younger one has become the stronger player of the two.

“I was like, ‘Wait, he’s getting better at this, and I’m playing these other sports,’” Elijah said. “After that, I just locked-in on tennis. So, junior year was actually the first year I only played tennis. It honestly helped me a lot; I got a lot better. From junior year to senior year is the most growth I’ve seen over that winter and spring.

“I’ve gotten quite a lot better from last year, so just seeing Isaiah’s motivation and seeing how hard he was working at it gave me a lot of motivation to get as good as I could.”

For Isaiah, he focused this offseason on working on a couple different aspects of his game.

“My net game and putting away balls at the net: approaches, volleys, overheads,” said Isaiah on what he worked on most during the winter and spring. “… I’ve always been good at ground strokes and keeping the ball back in. I’ve been really good at taking people’s pace and using it to my own advantage. As I started playing weaker players, I found it harder to make my own pace and crush the ball a little bit and hit it harder. And so, I’ve definitely worked on that all offseason, from sophomore year to junior year.

“I feel like I’ve gotten a lot better at putting players in difficult situations and then closing it off at the net.”

All of that hard work paid off for the brothers, as they have become two of the top individual players in the area. That work paid off this past weekend, when Westview beat Mississinewa in the semistate championship to advance to this week’s state tournament.

Isaiah was dominant in his match, winning 6-1, 6-2. Meanwhile, Elijah had a comfortable win on paper, winning 6-4, 6-2. The way the final game played out, however, was dramatic.

With the team leading 2-1 overall, Elijah stepped up to serve for the semistate title. It would ultimately take five championship points, but the senior finally made the right shots to win his match and win the team title.

On the sideline, Isaiah grew somewhat frustrated knowing that the end goal was in sight — only for his brother to keep on delaying the moment.

“All I was thinking was, ‘Elijah, it does not have to be perfect. It just has to be done,’” Isaiah said. “I knew he was trying to get that perfect shot. I was standing with a couple of my friends, and we were kind of almost laughing in a way because we knew Elijah was going to win — we were 100% sure he was going to. But the fact that it just kept going into so many match points; we were just sitting on the edge of our seats, going, ‘Come on, Elijah. Just get the point over with and win it and we can go to state.’”

Now, they do get to go to state for the second time in three seasons. Isaiah and Elijah are the only varsity players remaining from that 2019 state-bound team, giving them the most experience on the roster. Isaiah feels like his team is the underdog going into the weekend, mostly because of the size of Westview compared to all the other schools competing.

With this being Elijah’s senior year, the trip to state is that much more special. Having his brother by his side has only added to the journey.

“It’s honestly an awesome experience going down as a senior because I get to leave it off on this banger,” Elijah said. “Being able to leave off on this is just really incredible, and I couldn’t have asked for a better season or better team.

“And the fact I get to do it with my brother just makes it 10 times better. Just being able to play right beside him and feeling that connection when we play on the court is really awesome, and the fact I get to leave high school with all of these memories is just incredible.”