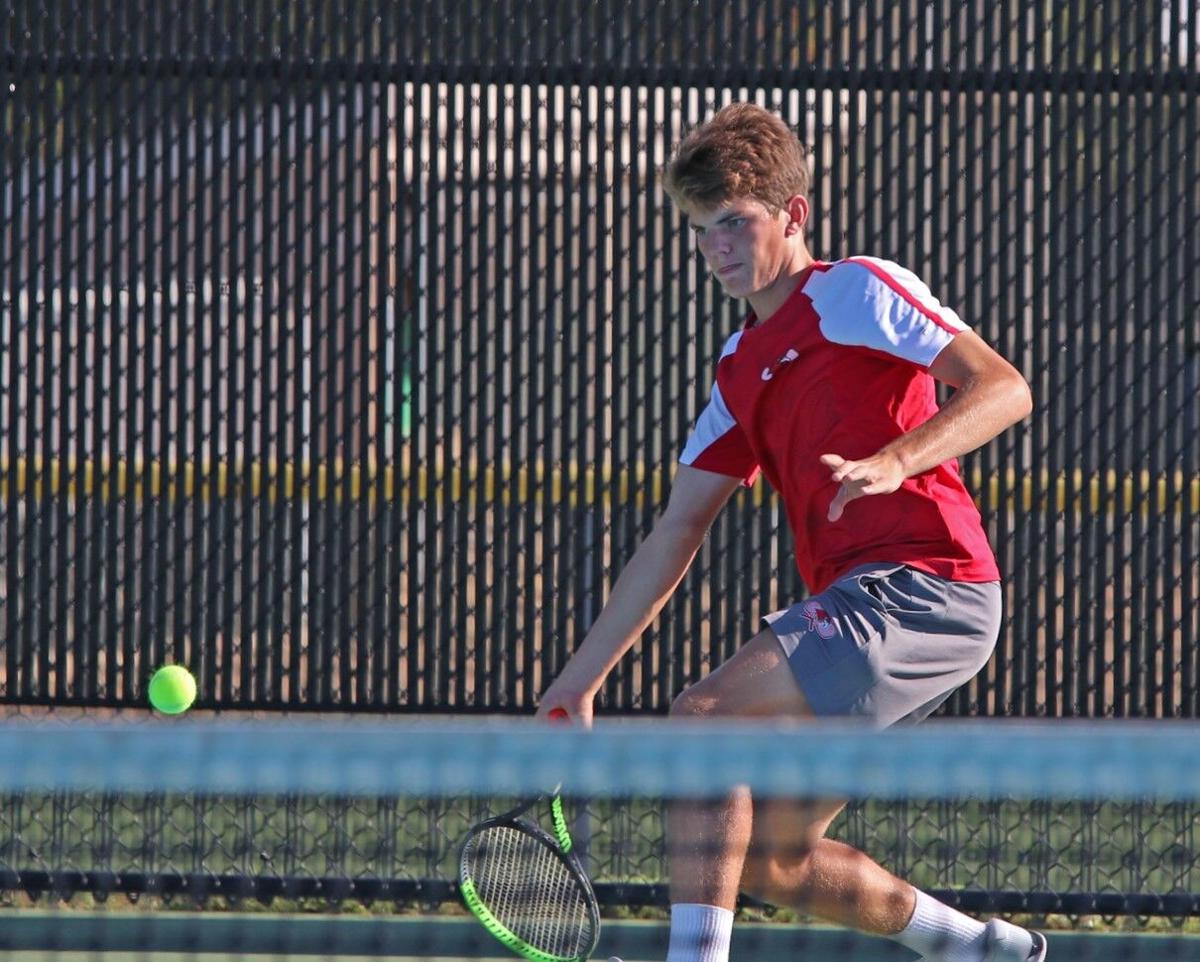 Goshen No. 1 singles player Pi Wellington goes to hit a shot during his match against Concord Wednesday at Concord High School in Dunlap. 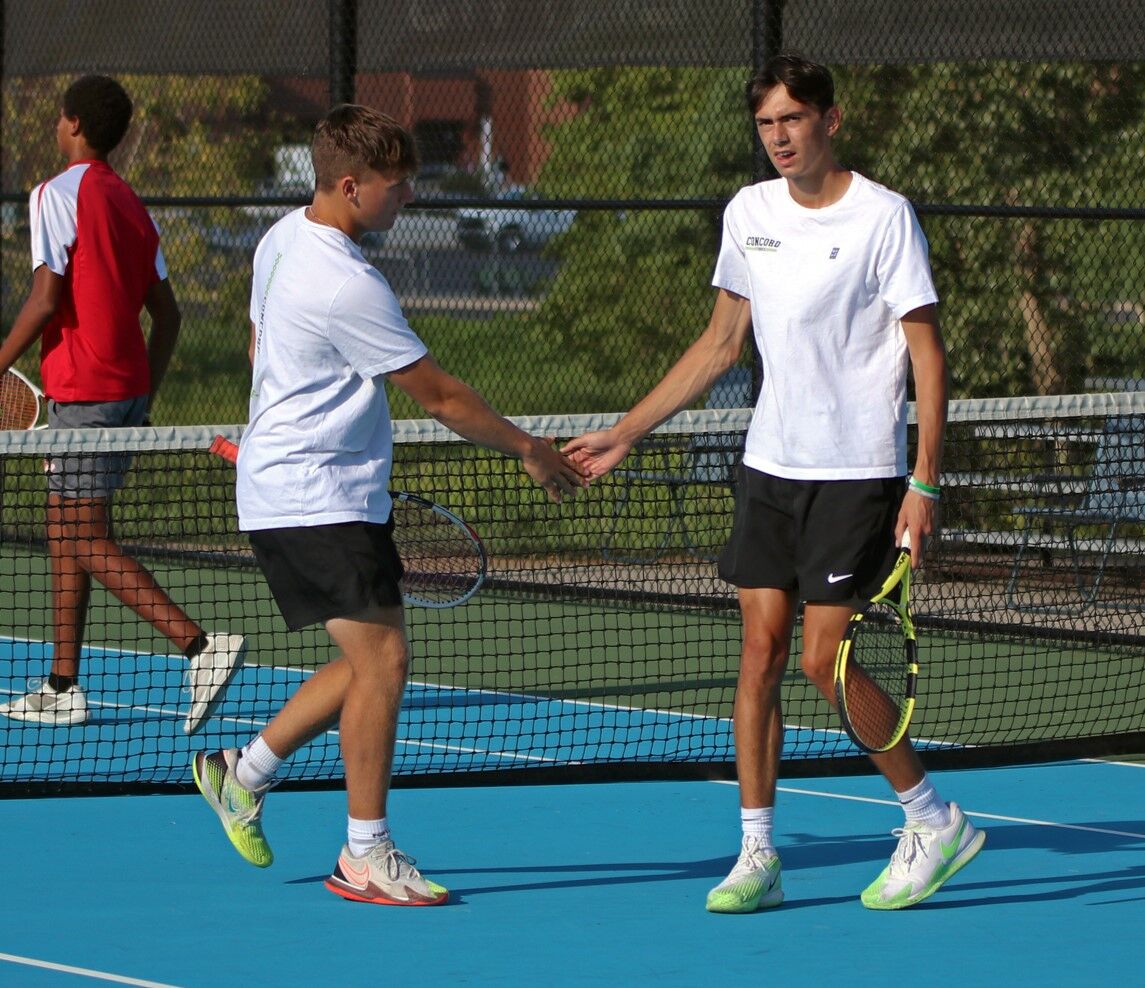 Concord’s No. 1 doubles team of senior Thomas Burkert, left, and senior Ethan Kavanaugh high-five after a point during Wednesday’s match against Goshen at Concord High School in Dunlap. 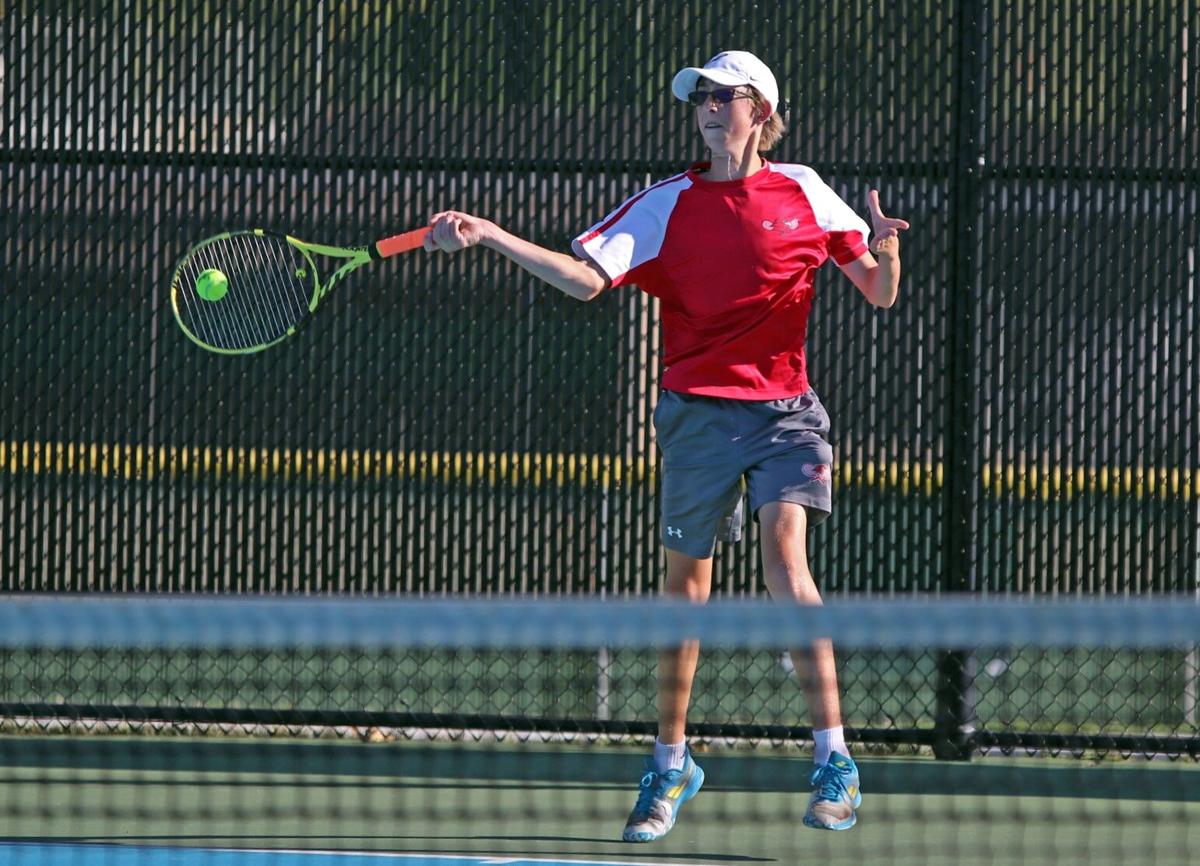 Goshen No. 3 singles player Isaac Stahly hits a forehand shot during his match against Concord Wednesday at Concord High School in Dunlap. 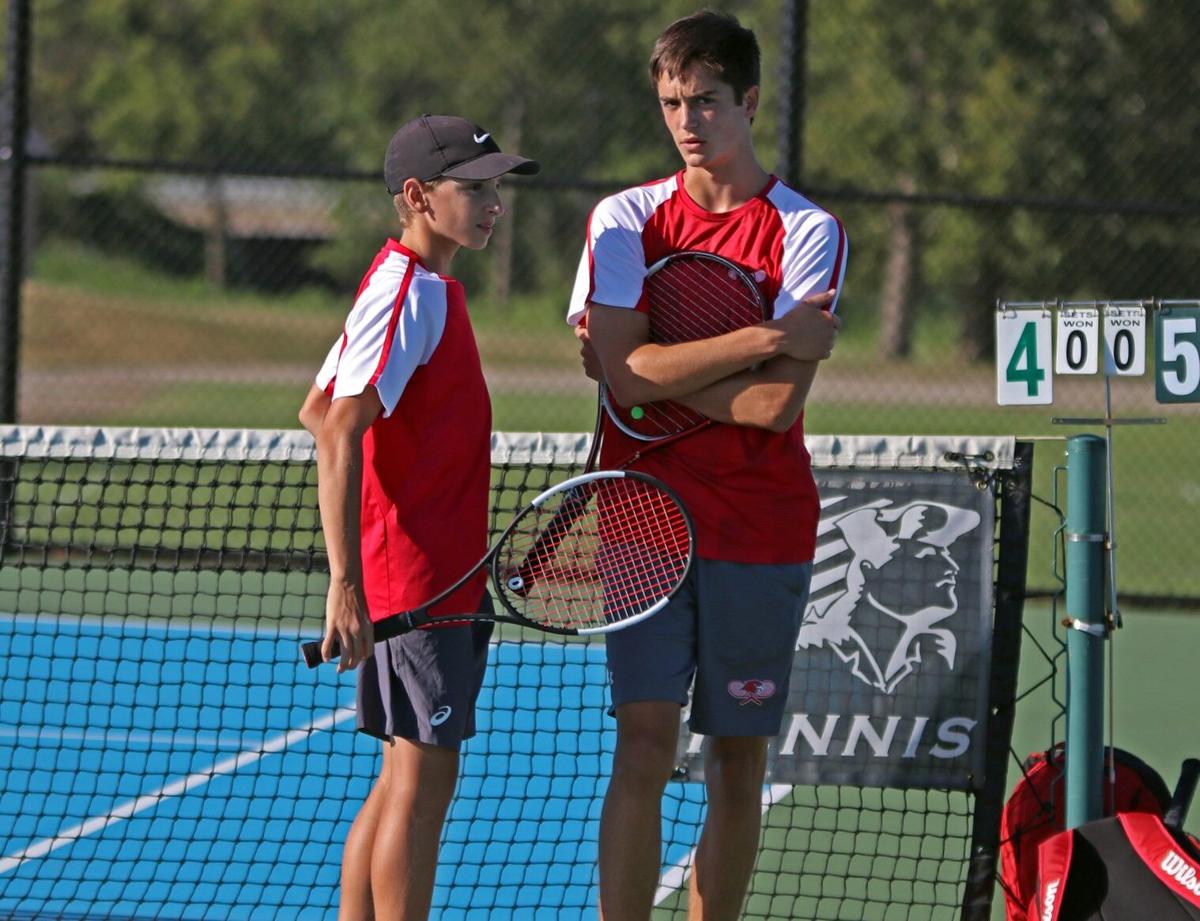 The Goshen No. 2 doubles pairing of Miles Mclaughlin, left, and Moses Kratzer talk strategy in between games during their victory over Concord Wednesday at Concord High School in Dunlap. 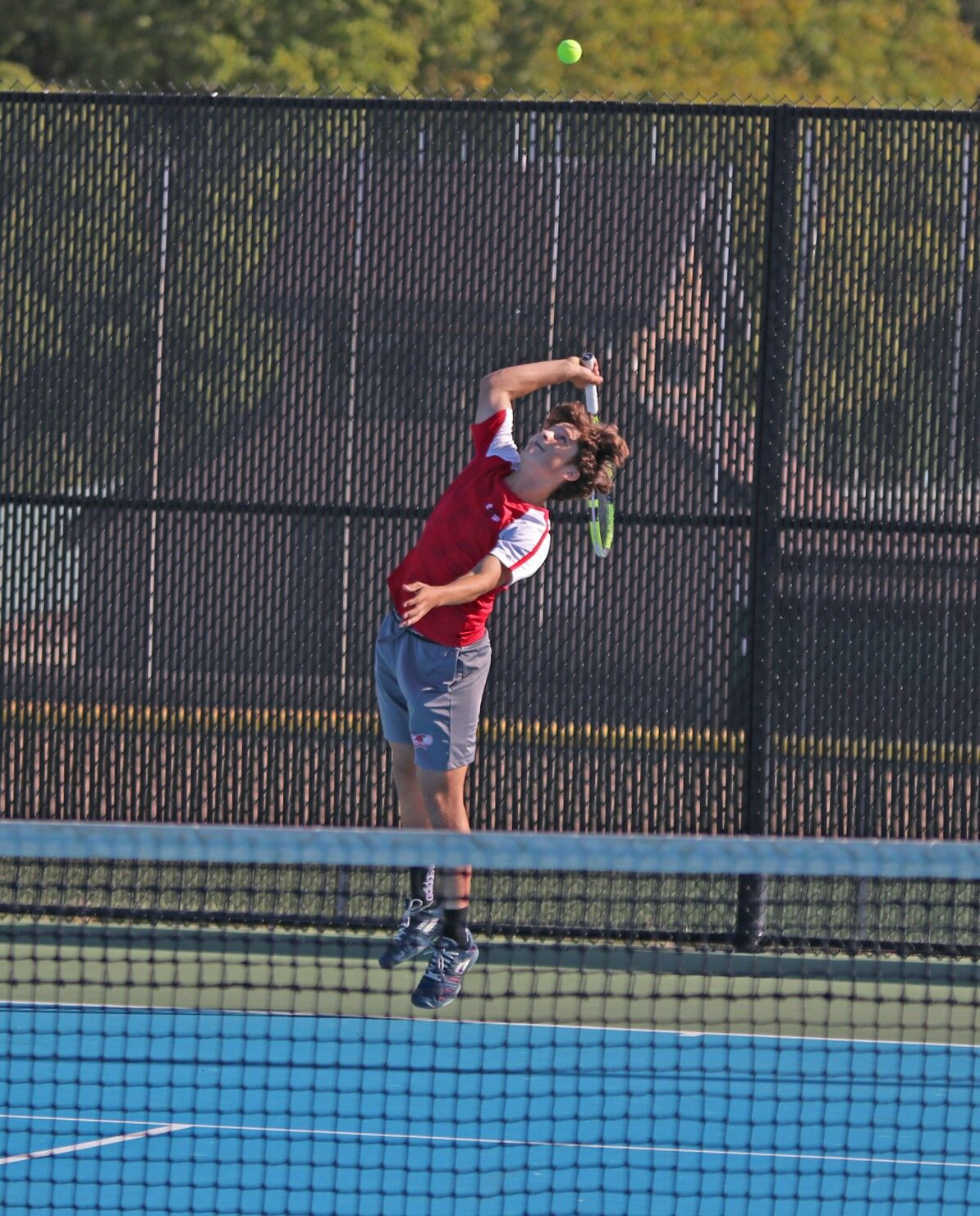 Goshen No. 2 singles player Moses Sawatzky serves the ball during his match against Concord Wednesday at Concord High School in Dunlap.

Goshen No. 1 singles player Pi Wellington goes to hit a shot during his match against Concord Wednesday at Concord High School in Dunlap.

Concord’s No. 1 doubles team of senior Thomas Burkert, left, and senior Ethan Kavanaugh high-five after a point during Wednesday’s match against Goshen at Concord High School in Dunlap.

Goshen No. 3 singles player Isaac Stahly hits a forehand shot during his match against Concord Wednesday at Concord High School in Dunlap.

The Goshen No. 2 doubles pairing of Miles Mclaughlin, left, and Moses Kratzer talk strategy in between games during their victory over Concord Wednesday at Concord High School in Dunlap.

Goshen No. 2 singles player Moses Sawatzky serves the ball during his match against Concord Wednesday at Concord High School in Dunlap.

ELKHART — The last time Goshen was Northern Lakes Conference champions in boys tennis, none of the players on the current team were born yet.

On Wednesday, those said players took another step toward making their own history.

The No. 25 RedHawks beat Concord, 4-1, to knock off a previously-unbeaten in NLC play Minutemen team. Goshen improves to 5-0 in NLC matches (11-4 overall) and now sits firmly in the driver’s seat to win at least a share of its first NLC championship since 1999.

“We knew it was going to be a big one, and we knew (Concord) was having a very good year as well, 4-0 in the conference,” Goshen coach Daniel Love said. “It was two teams fighting for that top spot, so we knew they’d play tough. Even though they have a smaller team than usual this year, Concord is never short on talent, and they showed that. It was a tough match, but I’m thankful and relived that we won it.”

“(Wednesday) wasn’t one of our better days,” Denton said. “We were a little bit flat — it may have been because of Goshen. They’re a solid team. … They just played a little bit smarter than us, and that’s what we were talking about: just playing a little smarter, maybe digging a little bit deeper and keep working.”

Goshen picked up some clutch victories across the board against Concord. The first match to end was No. 2 singles, where RedHawk junior Moses Sawatzky cruised to a 6-2, 6-2 win. Shortly thereafter, the No. 2 doubles pairing of sophomores Miles Mclaughlin and Moses Kratzer were straight-set winners for Goshen. Mclaughlin and Kratzer trailed early in the first set, but rallied three-straight games to take the set, 7-5. They then won the second set, 6-3.

The RedHawks officially clinched the match with a win at No. 3 singles from sophomore Isaac Stahly. He won his first set, 6-2, before going down 4-5 midway through the second set. Much like his teammates at No. 2 doubles, though, Stahly rallied off three-straight game wins to take the second set, 7-5, and give the overall victory to his team.

This cleared the way for the No. 1 singles and No. 1 doubles matches to finish up their respective third sets. After Concord won the first set in both matches, Goshen responded on both courts to win the second set and force decisive third sets.

At No. 1 doubles, the Minutemen duo of seniors Thomas Burkert and Ethan Kavanagh slammed the door shut on any Goshen comeback attempt, winning the final set, 6-1, to win the match by a score of 6-4, 4-6, 6-1.

On the No. 1 singles court, Goshen sophomore Pi Wellington was able to complete the comeback, winning the third set, 6-4. He lost the first set, 1-6, before coming back and winning the second set, 6-1.

Love complimented the play of many of his players from Wednesday, especially given the adversity almost all of them had to overcome to get the victory.

“Moses (Sawatzky) has been playing really well at 2-singles all year; he played great (Wednesday) and took control of that match early and didn’t give it up, and I was proud of that,” Love said. “At 1-singles, you have a lot of tough matches, and Pi did not wilt after losing that first set very, very badly. The way he responded was way different than how he’s been in the past, and that’s been a focus.

“Maybe our biggest surprise came at 2-doubles. Miles and Moses (Kratzer) have been rolling. Moses hasn’t lost yet this season, and Miles only lost the vert first match. They’ve been on fire.”

Concord (8-6, 4-1 NLC) now prepares for Northridge Thursday night. With less than a week to go before the conference tournament, Denton is looking to fine-tune some things on his team.

“They struggled the other night, and that was the same thing (Wednesday): the fight,” Denton said. “That’s what we preach every night, is to get better because one of our goals is, obviously, sectionals and conference. We still have a chance at conference, but sectionals, that’s definitely up there. So, we’re working hard to get better. … We live and learn; we play hard and we fight hard. That’s all it’s about.”

Goshen now controls its own destiny to win the NLC regular season title outright. They have two more regular season conference matches upcoming: home vs. Plymouth Thursday and at Mishawaka Monday. If the RedHawks win both of those, they’ll be the regular season champions heading into the NLC Tournament, which begins this upcoming Wednesday, Sept. 22 at Plymouth.

The success of Goshen this season has been noticed statewide, as the RedHawks recently entered the top 30 of the coaches’ poll. After being ranked No. 26 last week, the RedHawks moved up to 25th in Tuesday’s poll. Love said he couldn’t recall the last time Goshen was ranked in the top 30, but he and his team are enjoying the spotlight it brings.

“It’s exciting; it’s definitely an accomplishment. … I try not to psychoanalyze too much other teams are gearing up more (to play us) — I know it was a factor on Saturday only because I overheard East Noble talking about it,” said Love, referencing Goshen’s 3-2 loss to East Noble last weekend. “But we do the same. When we were playing state-ranked Northridge, we were doing the same. … I know it’s factor. I don’t know how much it’s really weighed on our own players; I haven’t picked up on that in practice. I think we’re fairly down-to-earth as far as that goes.”