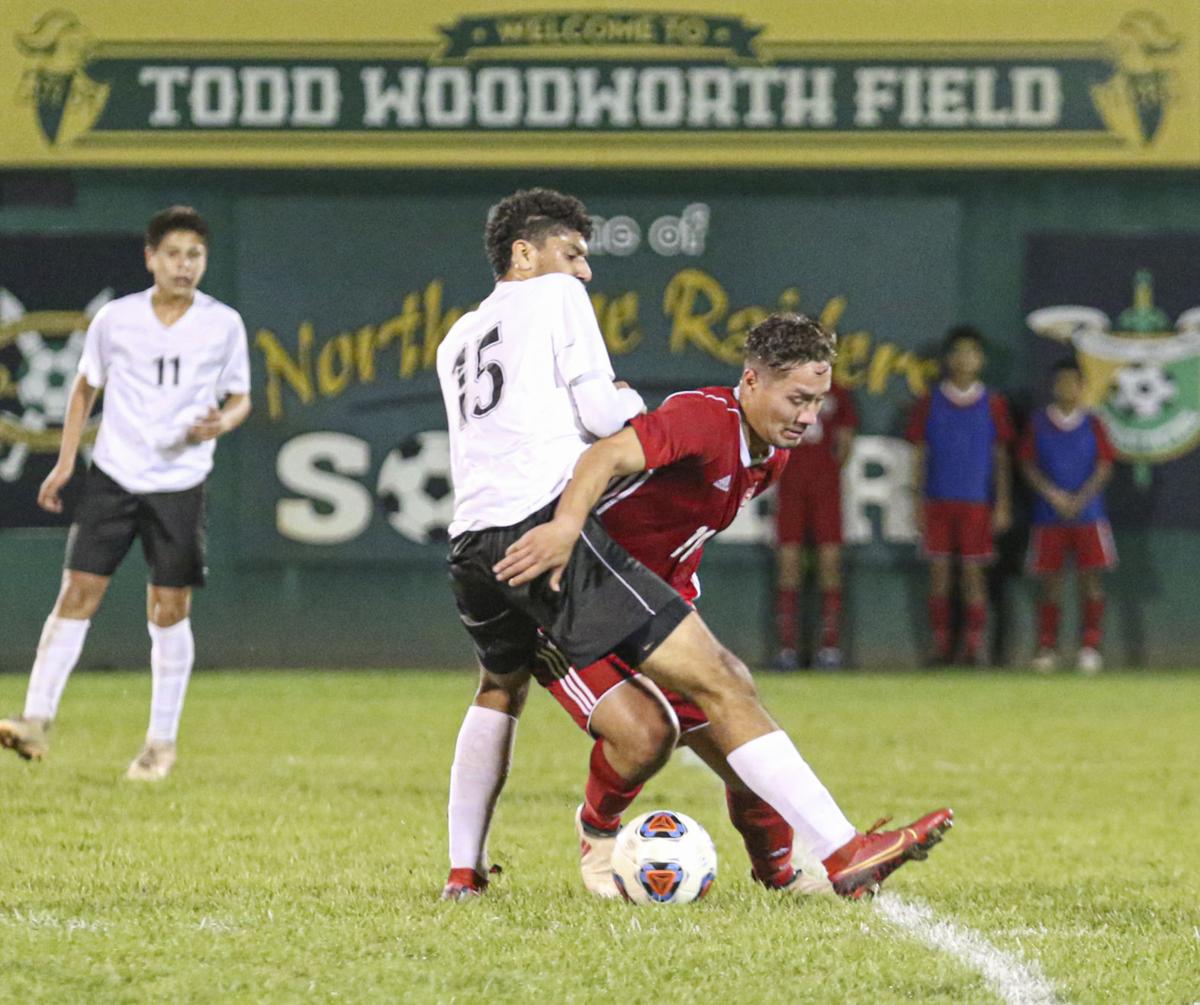 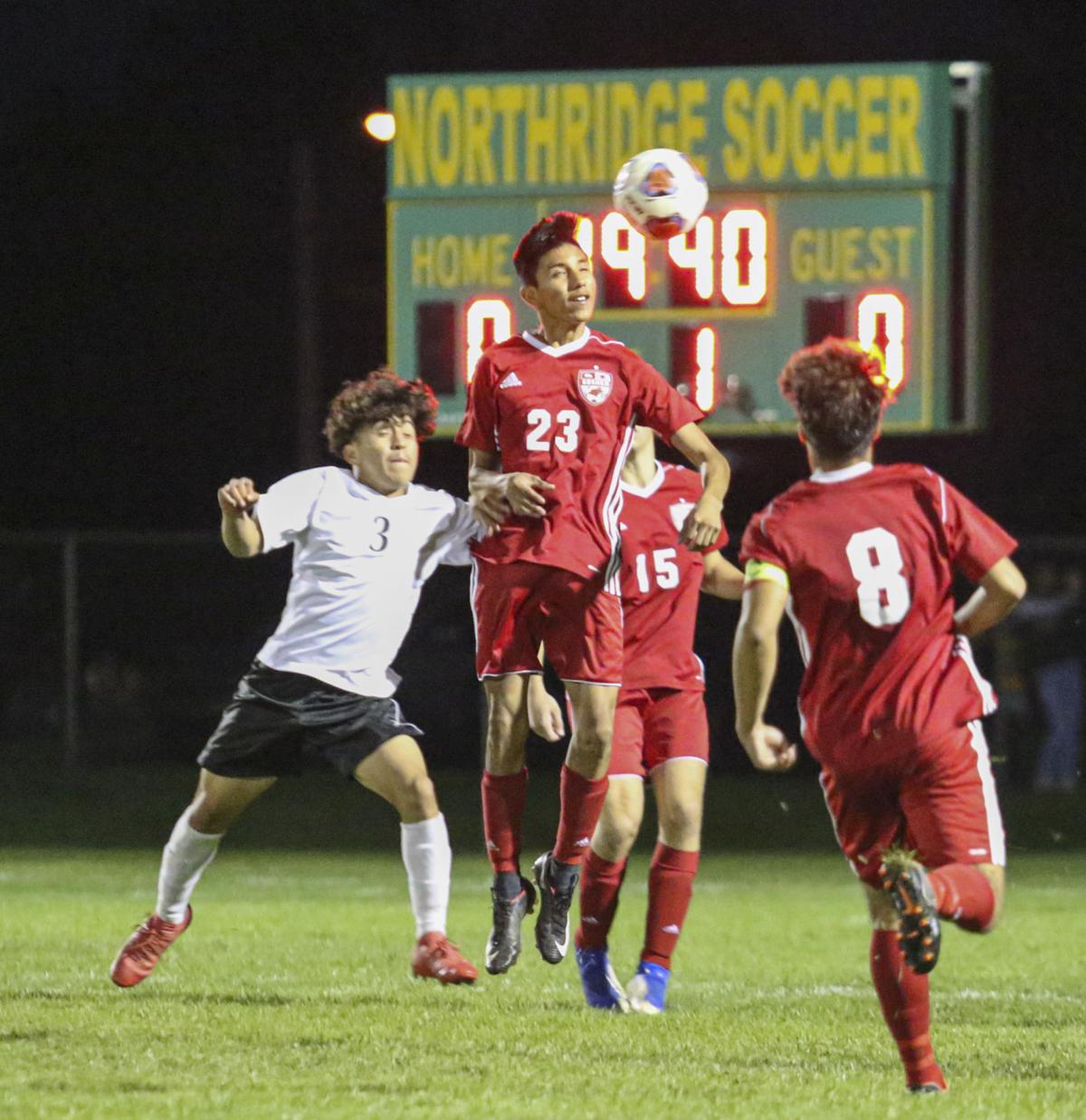 Goshen junior Jafet Gonzalez goes up for a header beside Elkhart Memorial sophomore Lucilo Villatoro Gomez in the IHSAA sectional opener for the two teams Tuesday night in Middlebury. 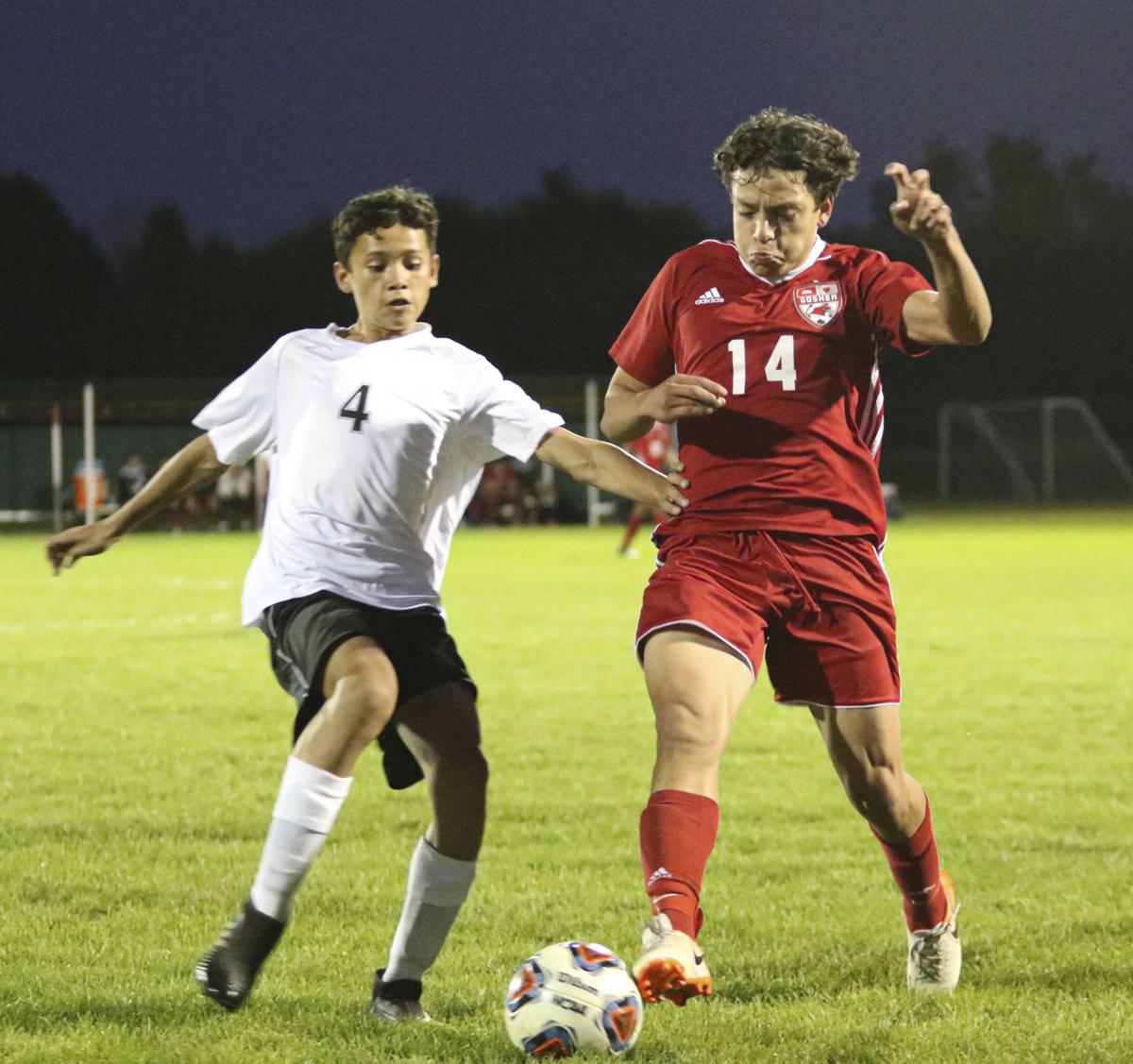 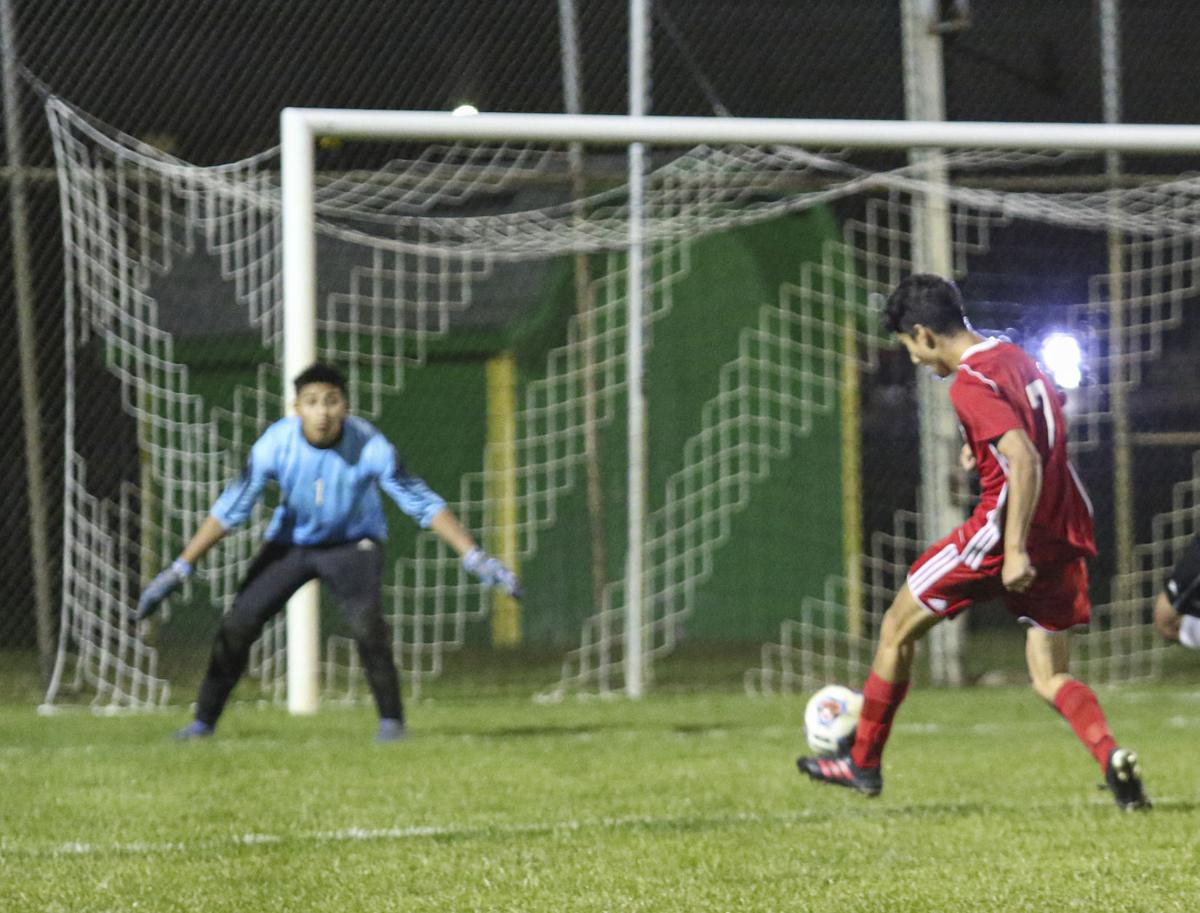 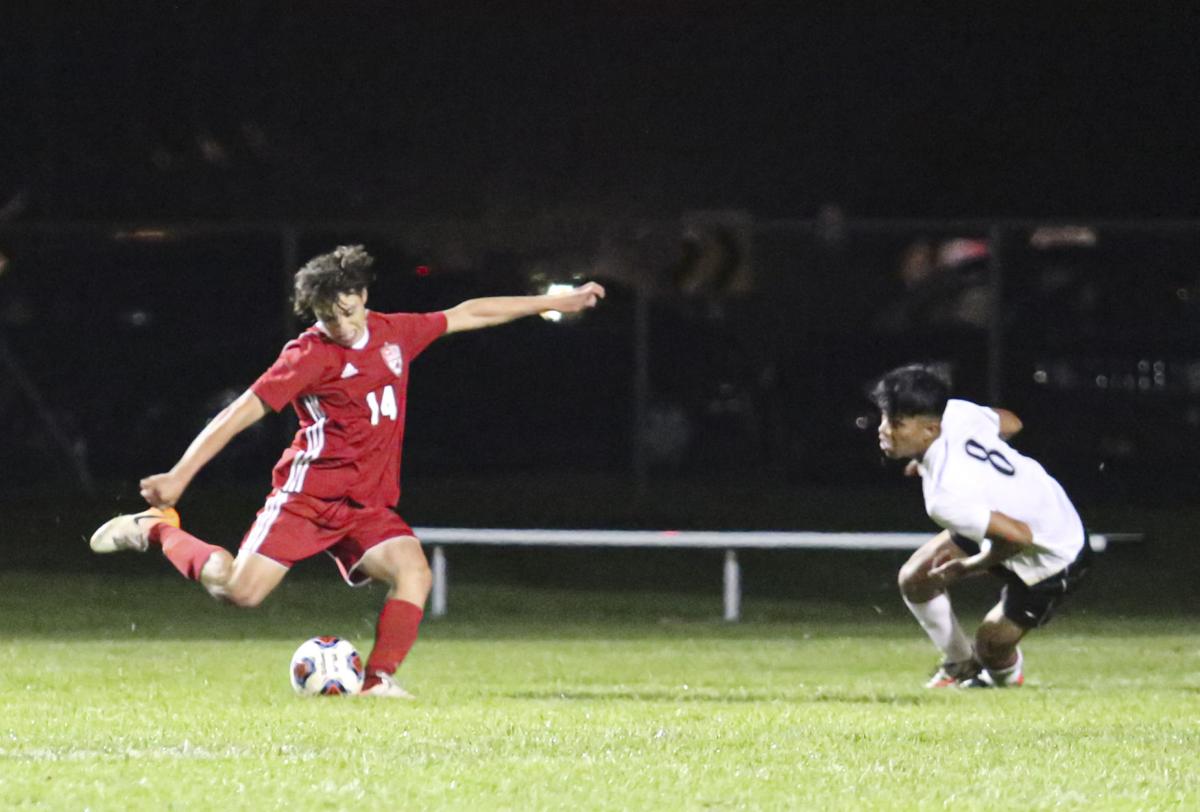 Goshen junior Jafet Gonzalez goes up for a header beside Elkhart Memorial sophomore Lucilo Villatoro Gomez in the IHSAA sectional opener for the two teams Tuesday night in Middlebury.

And the ball kept evading the net.

Finally, a goal was scored and the RedHawks (10-6-1) edged Elkhart Memorial, 1-0, Tuesday in the IHSAA Class 3A Northridge Sectional boys soccer tournament.

When the two Northern Lakes Conference schools met on Aug. 29 in Goshen, the RedHawks were 6-0 winners.

In the rematch under the lights at Todd Woodworth Field, the Crimson Chargers (6-9-2) withstood the Goshen onslaught with sophomore goalkeeper Bryan Guerrero making 11 saves and junior defender Mario Perez Alvarado another.

Goshen had many first-half scoring chances and led Memorial 7-0 in shots on goal at halftime, but it was scoreless until the 50th minute when an unassisted goal by junior Cesar Valdez put the RedHawks on the scoreboard.

“We created some chances. I was proud of our wide guys getting the ball into the box,” said Goshen varsity assistant Josh Snyder, filling in for head coach Viratham Mounsithiraj. “Something that’s plagued us all year is creating chances and not finishing.”

What was Memorial doing to curtail the RedHawks?

“They were saving the ball and that didn’t help,” said Snyder, who saw his team put 13 shots on goal for the night. “Their goalie played a excellent game. They had some defenders clear the ball off the line.

As a team, they worked really hard. They were organized and did their best to limit our chances.”

Chargers coach Todd Sheely talked about the drive of his team even with players not a full-strength.

“We could never get healthy the last week of the season, unfortunately,” said Sheely. “I’m proud of the boys. I can’t say one thing bad about their effort whatsoever.”

Goshen will play Elkhart Central (a 2-1 winner against Penn in Tuesday’s first match) in the second semifinal around 7 p.m. Wednesday. The Blue Blazers beat the RedHawks 2-0 in the season opener on Aug. 17.

The sectional championship is slated for 2 p.m. on Saturday.

Memorial put three shots on the net from long range between the 52nd and 58th minutes that were stopped by Goshen goalkeeper Ferando Salazar.

The RedHawks worked for 12 corner kicks — eight in the second half.

Memorial’s one corner came in the opening half.

Senior Bryan Ramirez scored two goals, including one with 2:35 left in the match, as Central edged Penn.