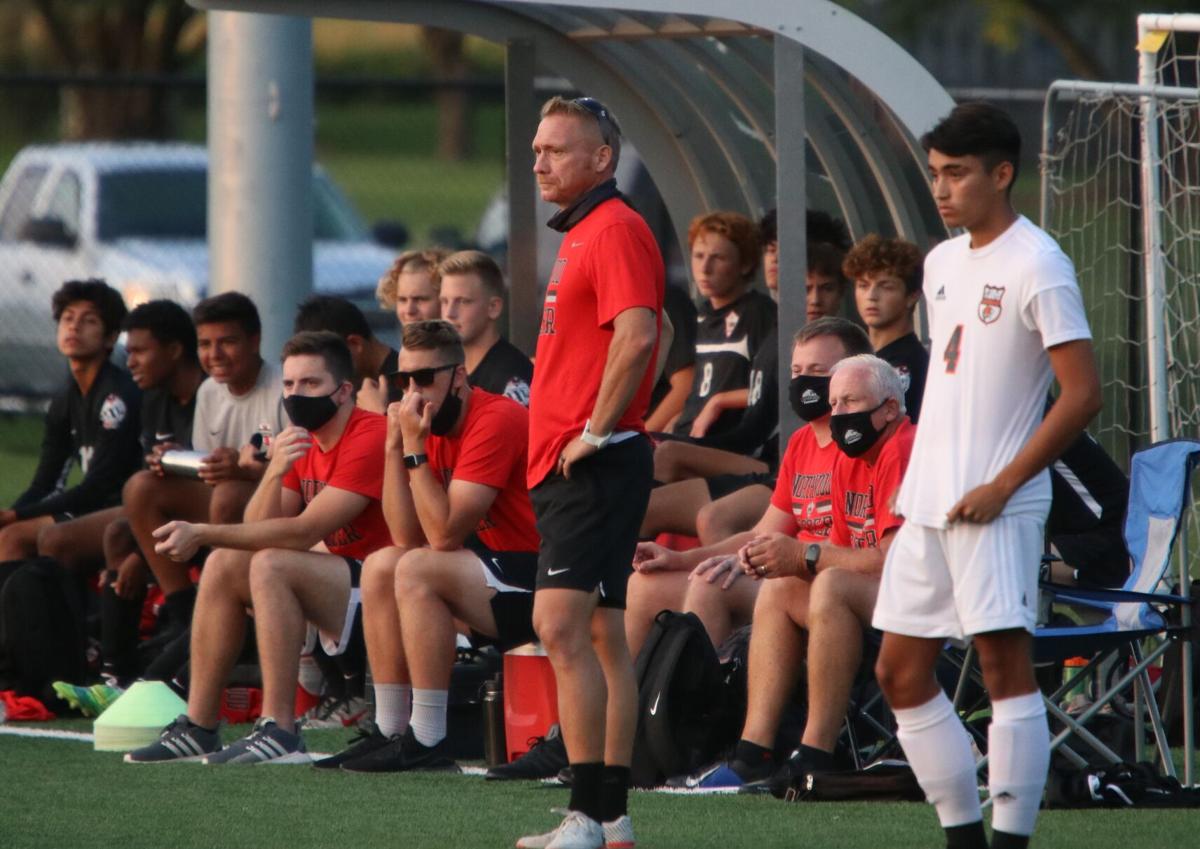 NorthWood boys soccer coach Brad Duerksen, standing center, looks on during a game against Warsaw in this Sept. 15, 2020 file photo in Nappanee. Duerksen is resigning as Panthers head coach after 24 seasons. 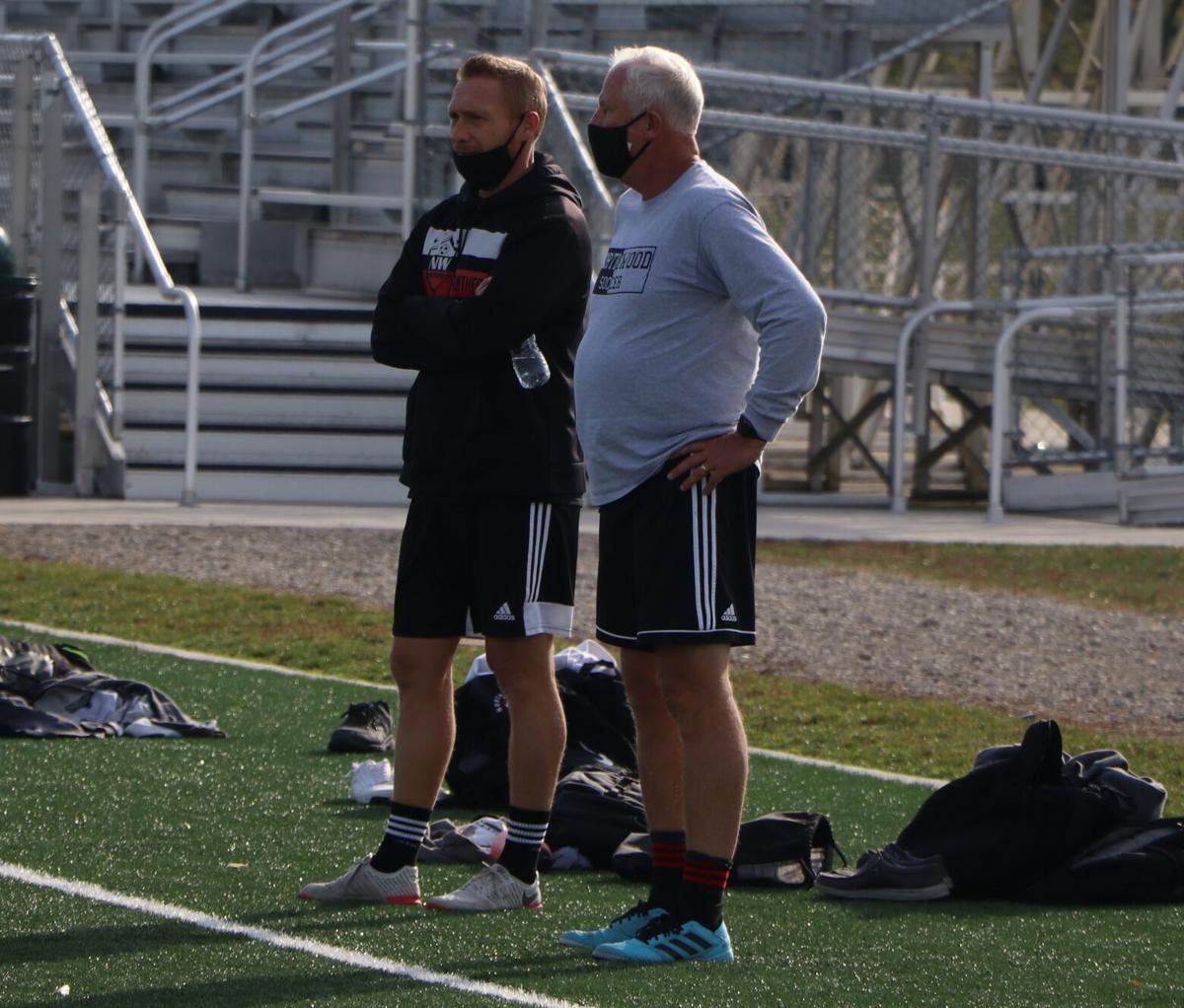 NorthWood head boys soccer coach Brad Duerksen, left, looks on during a practice with his assistant, Egbert Dijkstra, in this Oct. 21, 2020 file photo. Duerksen and Dijkstra coached together for 24 years. 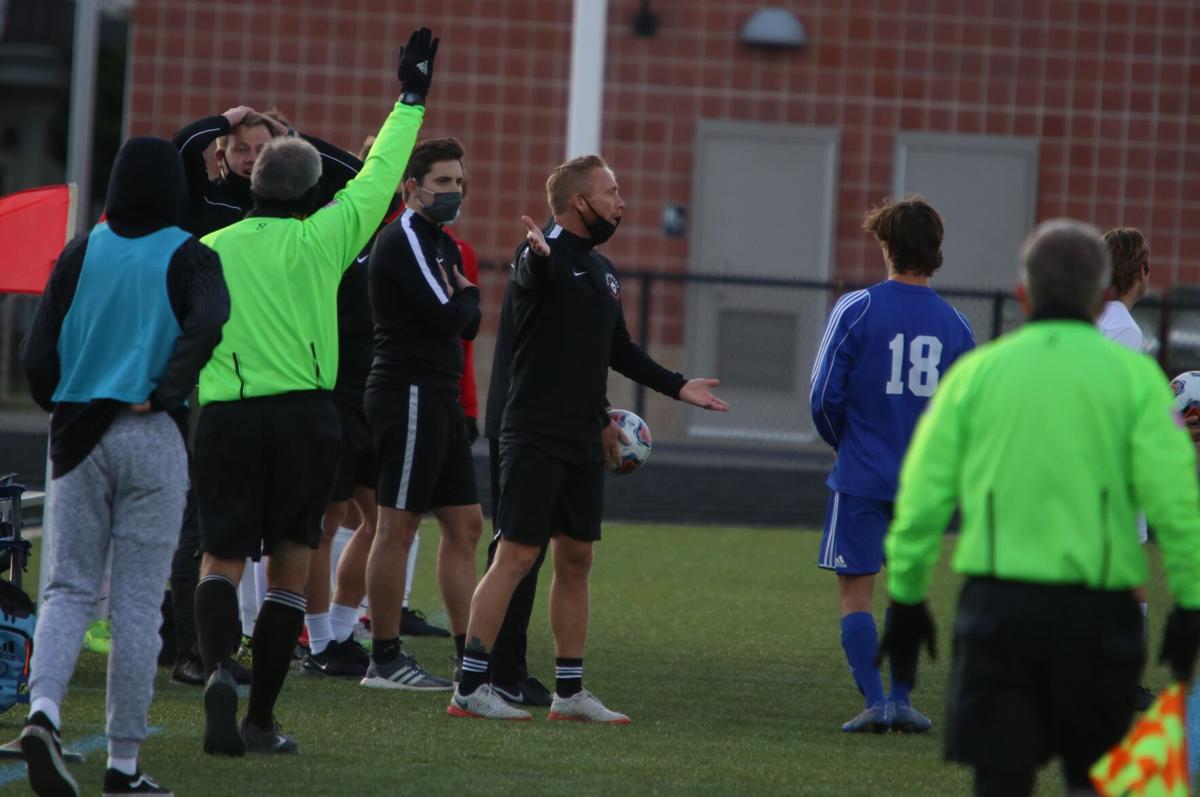 NorthWood boys soccer coach Brad Duerksen, center, gestures toward a referee during the Class 2A semistate game against Canterbury in this Oct. 24, 2020 file photo.

NorthWood boys soccer coach Brad Duerksen, standing center, looks on during a game against Warsaw in this Sept. 15, 2020 file photo in Nappanee. Duerksen is resigning as Panthers head coach after 24 seasons.

NorthWood head boys soccer coach Brad Duerksen, left, looks on during a practice with his assistant, Egbert Dijkstra, in this Oct. 21, 2020 file photo. Duerksen and Dijkstra coached together for 24 years.

NorthWood boys soccer coach Brad Duerksen, center, gestures toward a referee during the Class 2A semistate game against Canterbury in this Oct. 24, 2020 file photo.

NAPPANEE — For 24 years, Brad Duerksen has helped build the NorthWood boys soccer team into one of the best programs in the area.

Now, it’s time for the 48-year-old to take on a new challenge.

Duerksen is stepping down as Panthers head coach to pursue a new career in Florida. The news of Duerksen’s resignation was first reported by Ink Free News. Duerksen informed his team of the news Monday night.

“I feel like, with the season we had — last year, especially, but the last few seasons — we’ve accomplished some great things at NorthWood with the soccer program, and I feel like I want to leave it in the right position,” Duerksen said. “I don’t want to leave it after a bad year, so this felt like the right time.”

A week later, the Panthers fell to Fort Wayne Canterbury in the Class 2A northern semi-state game in a shootout.

Duerksen said the 2019 and 2020 seasons were his two favorites because he was able to coach his sons. In 2019, his oldest son, Skyler, was a senior while Chase was a freshman.

“Those two years combined have just been the most special years for me,” Duerksen said. “Being able to win the regional championship and being able to win that on Chase’s (goal) kind of being the difference there was a very special moment.”

“His friendship has meant more to me than anything,” said Duerksen about Dijkstra. “It was just something that happened on a chance 24 years ago … Honestly, I can’t even think of an argument we’ve had in 24 years. We haven’t always agreed on everything on the soccer field, but I take pride in taking advice from my assistant coaches. … He’s just been a great friend. It’s going to be strange without him.”

Duerksen will be moving to Winter Garden, Florida with his family to pursue a new coaching adventure. He will be the head boys soccer coach at Horizon High School, which will be opening in the fall. Similar to what he did with NorthWood, Duerksen will have a chance to build a program from the ground-up at Horizon.

“The opportunity arose that we couldn’t pass up at this time,” Duerksen said. “It’s a brand-new school in the Orlando area … I had the opportunity to meet with the principal and athletic director down there, and it’s just going to be an exciting time to build a new program.”

Duerksen is a Mishawaka High School graduate. He then played soccer at Bethel University for four years. Along with his coaching role at NorthWood, Duerksen was an English teacher at the school. Moving from an area he’s called home his whole life will be a big transition.

NorthWood athletic director Norm Sellers thanked Duerksen for his tremendous work in building the boys soccer program into what it is today.

“Brad and Maggie (Brad’s wife) have been wonderful friends to me and my family since the day I came to NorthWood as the AD,” said Sellers in an email to The Goshen News. “I had no experience in the world of soccer, and Brad has taught me what it meant to run a successful soccer program. Brad Duerksen is NorthWood Boys Soccer. He has seen our program grow into a large part of what we provide for our athletes. Brad, along with Egbert Dijkstra, have made NorthWood Soccer a successful, competitive and winning program in their time together.

“When considering the void he leaves behind, it is difficult to fathom. Brad is good for kids both as a teacher and as a coach. He is well respected by his colleagues and provides an enthusiasm that is tough to replicate. Brad will have the opportunity to do exactly what he did here at his new school. Start a new program with the tools he needs to be successful. Brad and his family will be greatly missed, but on behalf of our entire coaching staff, we wish him nothing but the very best as well all know he will be successful.”

Duerksen wanted to give thanks to everyone who’s supported him during his time with NorthWood.

“They’ve been amazing; very supportive, even after hearing about my resignation,” Duerksen said. “I’ve gotten no work done (Tuesday) at school because I’ve gotten so many text messages, phone calls and emails that I’ve had to reply to. It’s been a special day knowing how many haver reached out and showed their appreciation and kind words. It’s meant a lot to me.”