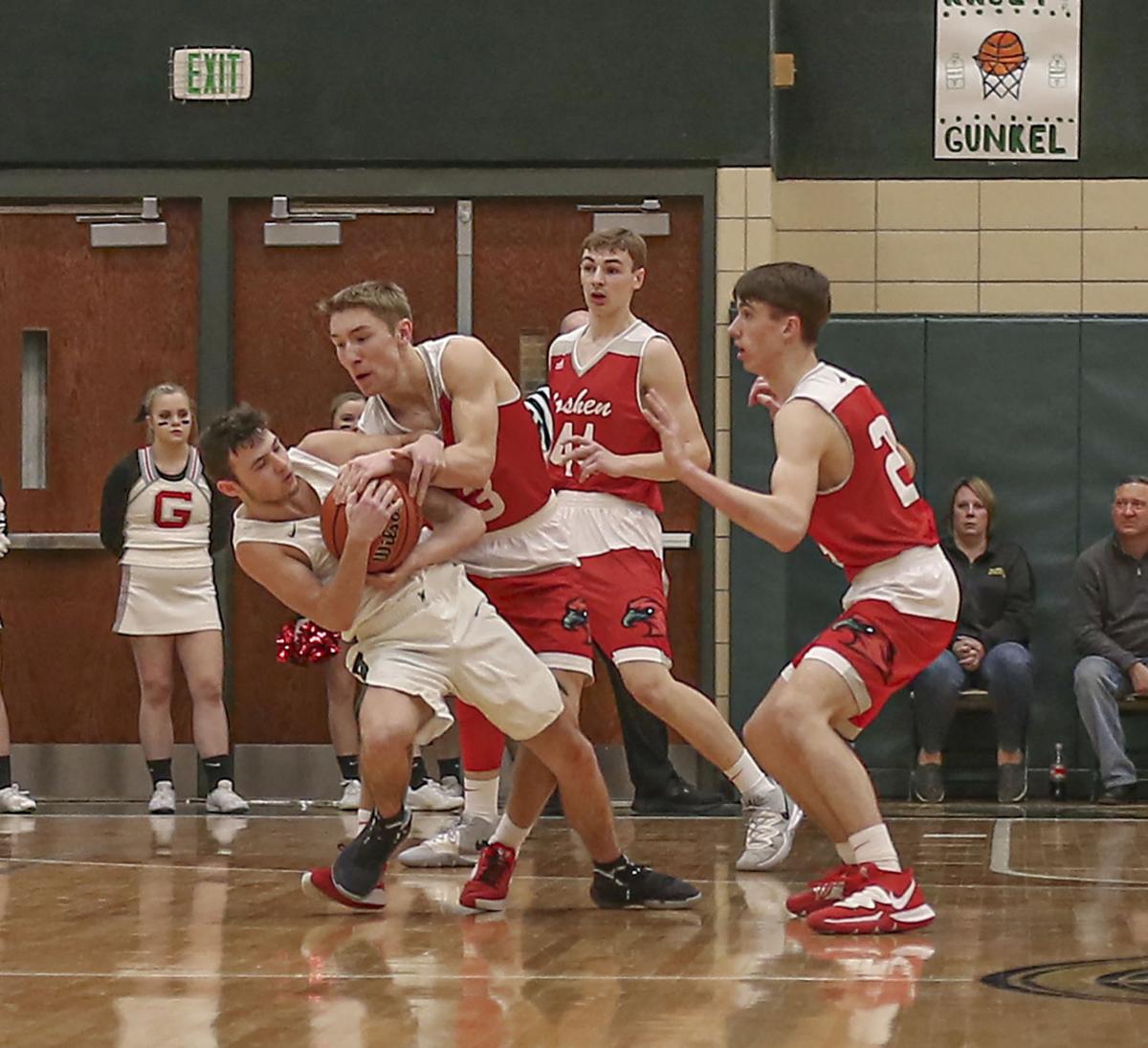 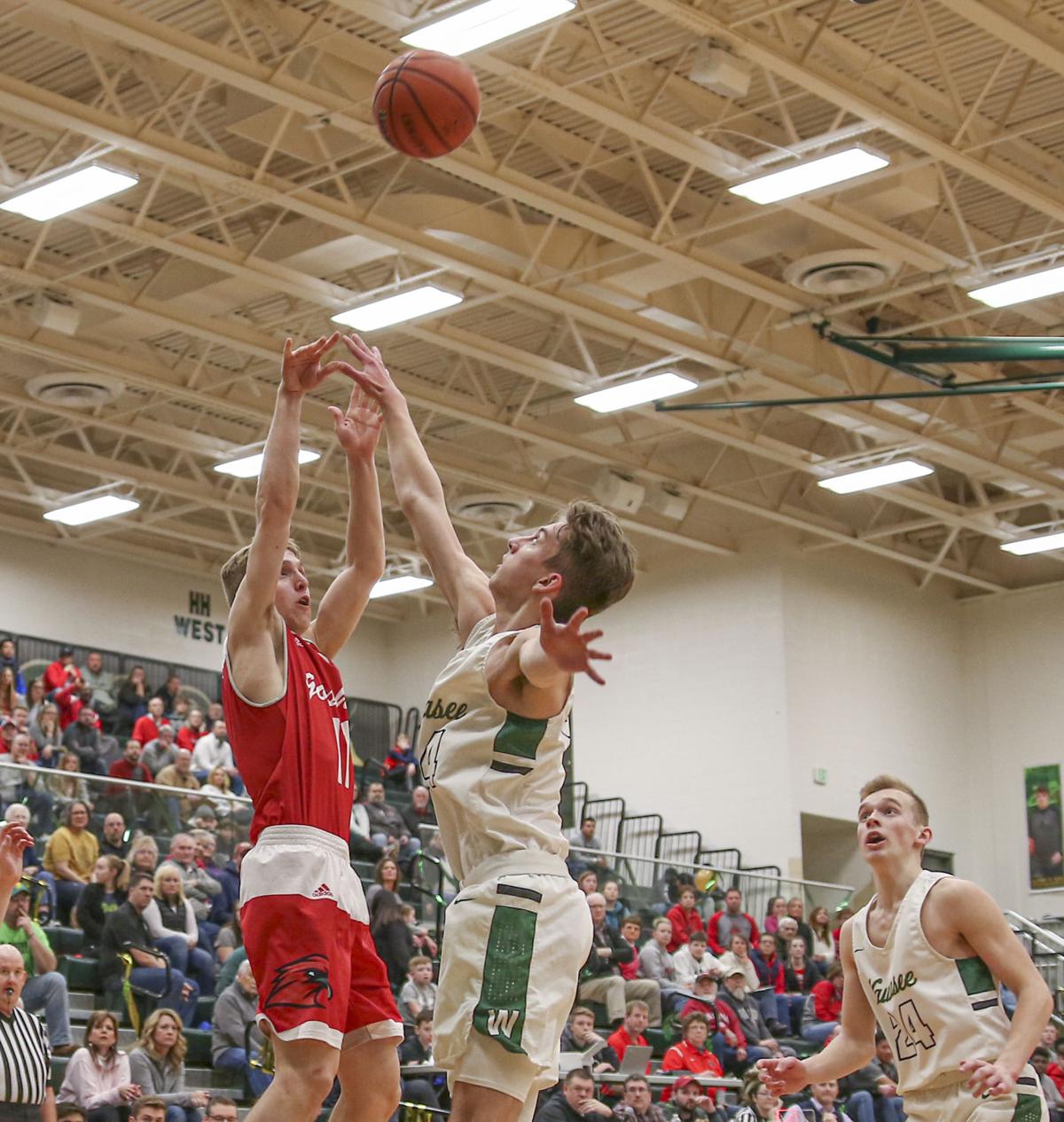 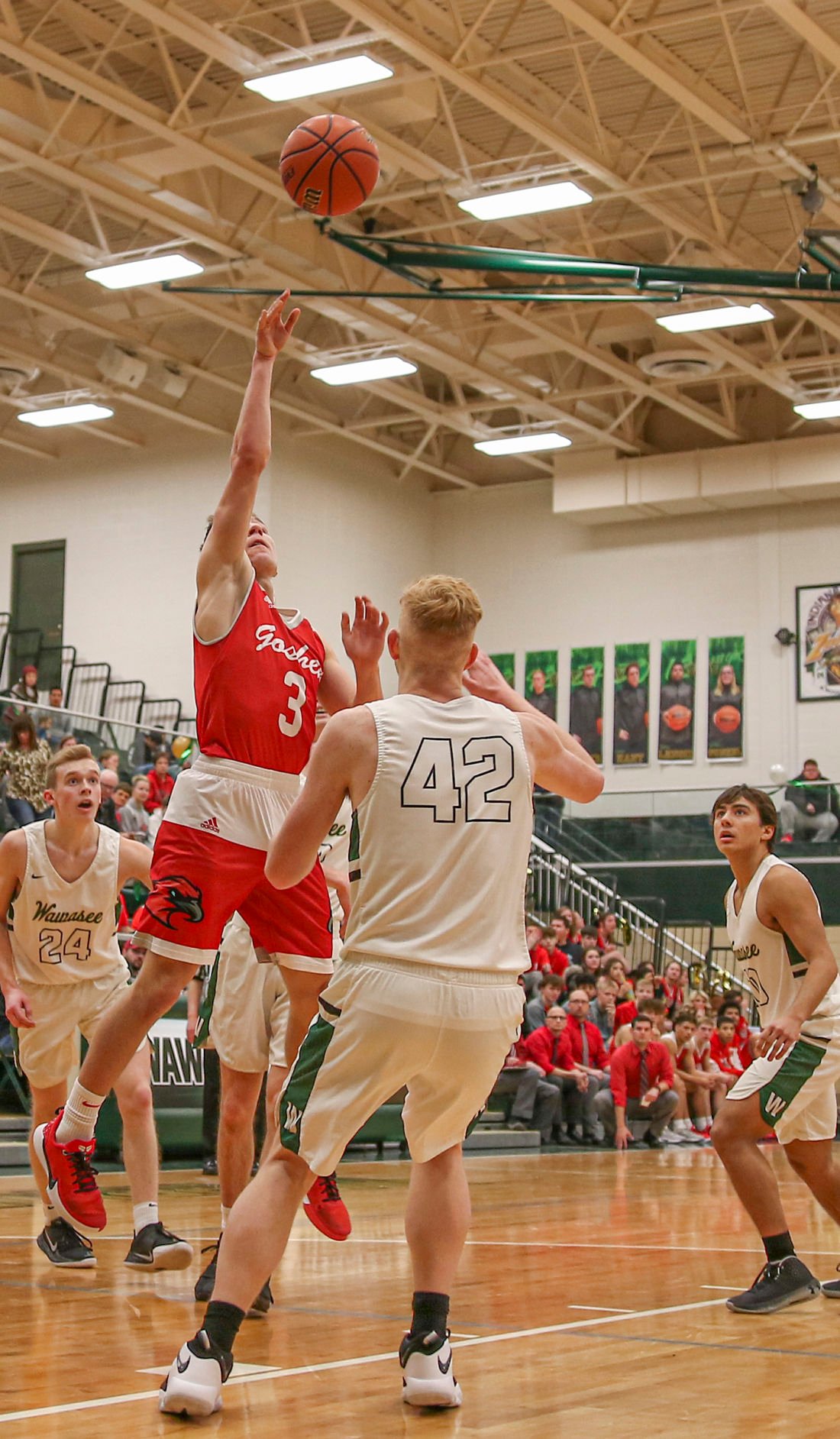 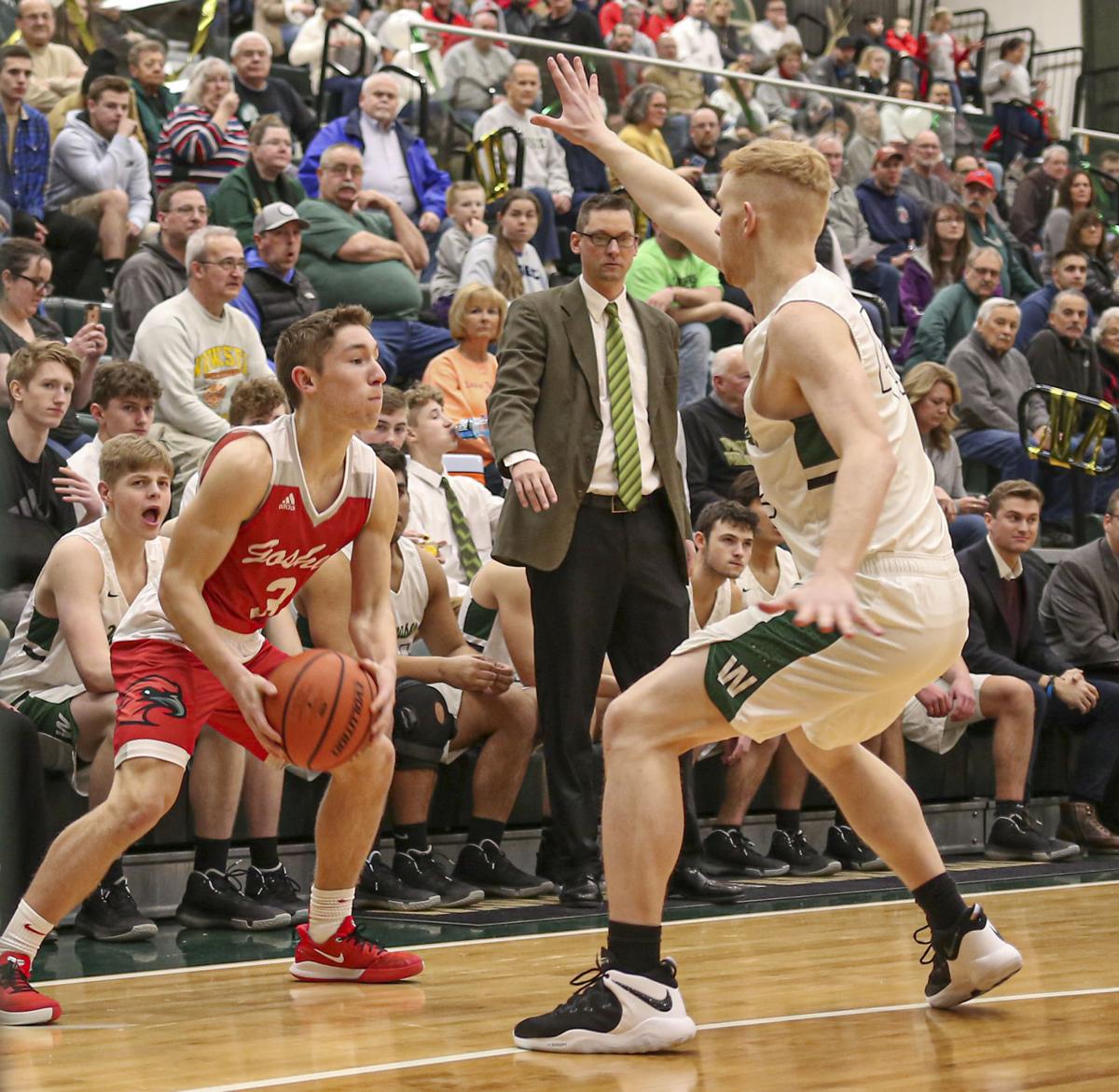 Goshen sophomore Drew Hogan (3) looks to pass the ball while being guarded by Wawasee senior Ethan Hardy (42). Behind them is former Goshen player and current Wawasee head coach Jon Everingham. 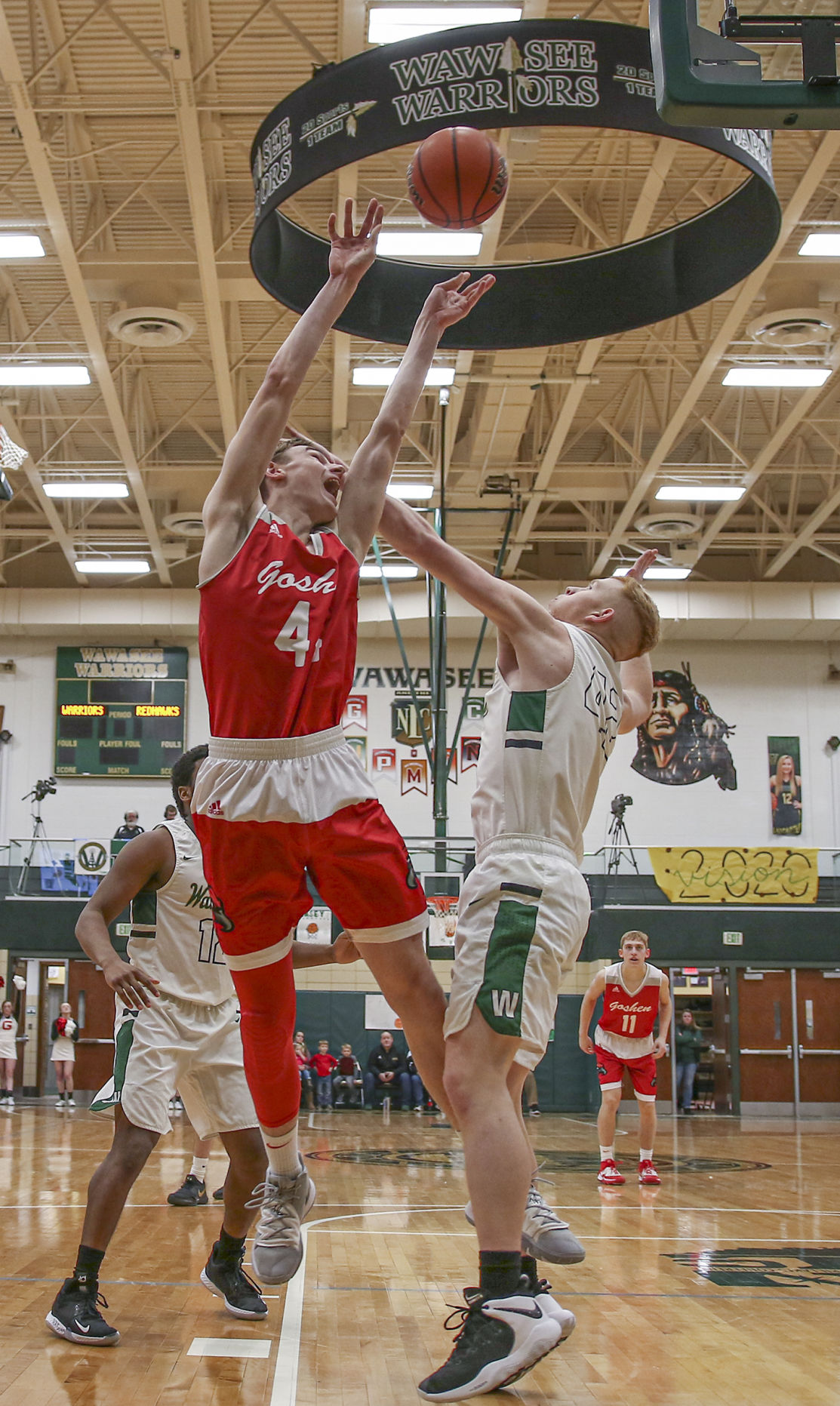 Goshen junior Blak Wiess (44) puts up a shot and gets fouled by Wawasee senior Ethan Hardy (42) during Friday night’s NLC matchup in Syracuse. 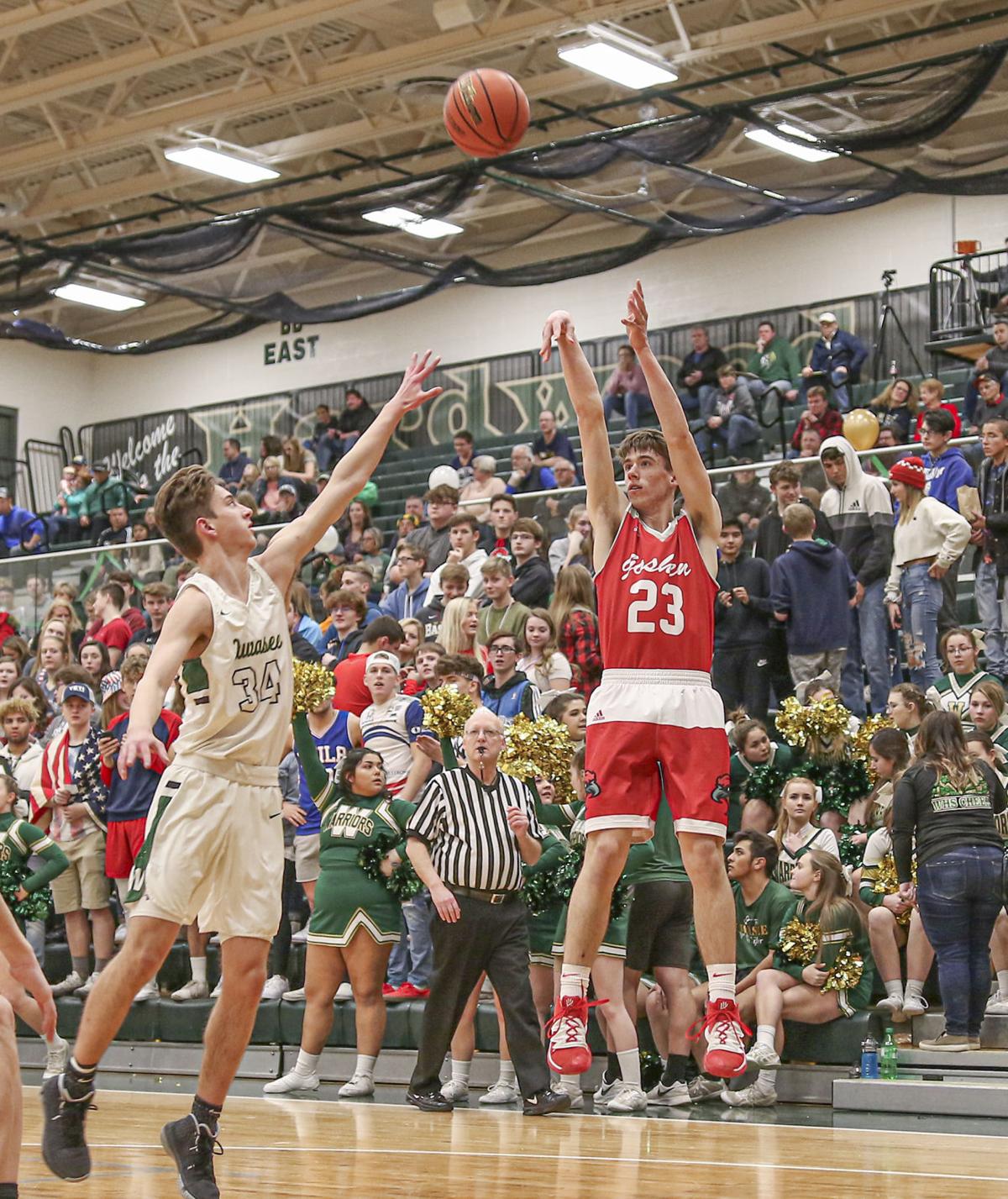 Goshen sophomore Drew Hogan (3) looks to pass the ball while being guarded by Wawasee senior Ethan Hardy (42). Behind them is former Goshen player and current Wawasee head coach Jon Everingham.

Goshen junior Blak Wiess (44) puts up a shot and gets fouled by Wawasee senior Ethan Hardy (42) during Friday night’s NLC matchup in Syracuse.

GOSHEN — Austin Miller was the man for most of the game, but it was Jaydon Boyer who made the game-winning play for the Wawasee Warriors in a 49-47 Northern Lakes Conference high school boys basketball thriller over the visiting Goshen RedHawks Friday night.

Miller poured in a game-high 27 points, but it was Boyer with a putback after an offensive rebound that accounted for the game winner as time expired.

Miller attempted the first shot for the Warriors, but it bounced off the rim into the hands of Boyer.

“Miller had the game of his life, but we forced him to take a tough shot. He missed but Boyer was there for the rebound,” Goshen coach Michael Wohlford said. “It’s not always the first shot that gets you. It’s the second one.”

According to Wohlford, Miller was 30-of-100 from 3-point range going into the contest before draining five long-range bombs against the RedHawks.

Boyer’s heroics spoiled a great comeback by the RedHawks. Goshen trailed 37-25 with 1:25 to go in the third period before charging back and taking a 39-38 lead at 4:27 of the fourth.

The RedHawks opened the final quarter with 3-pointers by Quinn Bechtel at 6:52 and Drew Hogan at 6:18 to cut the deficit to four points (38-34).

“We were able to get back into the game very quickly,” Wohlford said.

“One point didn’t beat us,” the coach said. “We played a very poor first half. Wawasee was playing a loose box-in-one defense and we turned the ball over in a lot of situations where we normally don’t. We had 16 turnovers and that is way too many.

“I have to give a lot of credit to our kids for battling back into this one, but this one stings. Two of the most difficult losses in my career at Goshen have been here. Tonight and two years ago (Wawasee won 51-48 in overtime). I didn’t have a lot to say to the kids in the locker room after this one.”

Both teams kept the score tied late in the contest by hitting at the free-throw line. The score was tied 43-43 when Kameron Salazar put the Warriors ahead with two freebies only to have Hogan swish a pair of his own to knot the score 45-45. Ethan Hardy hit two more tosses from the charity stripe for a two-point Wawasee lead only to have Hogan tie the score with two more freebies.

“We fouled players that we thought might miss, but that wasn’t the case,” Wohlford said.

Hardy chipped in with seven points for the winners, Keaton Dukes six and Salazar five.