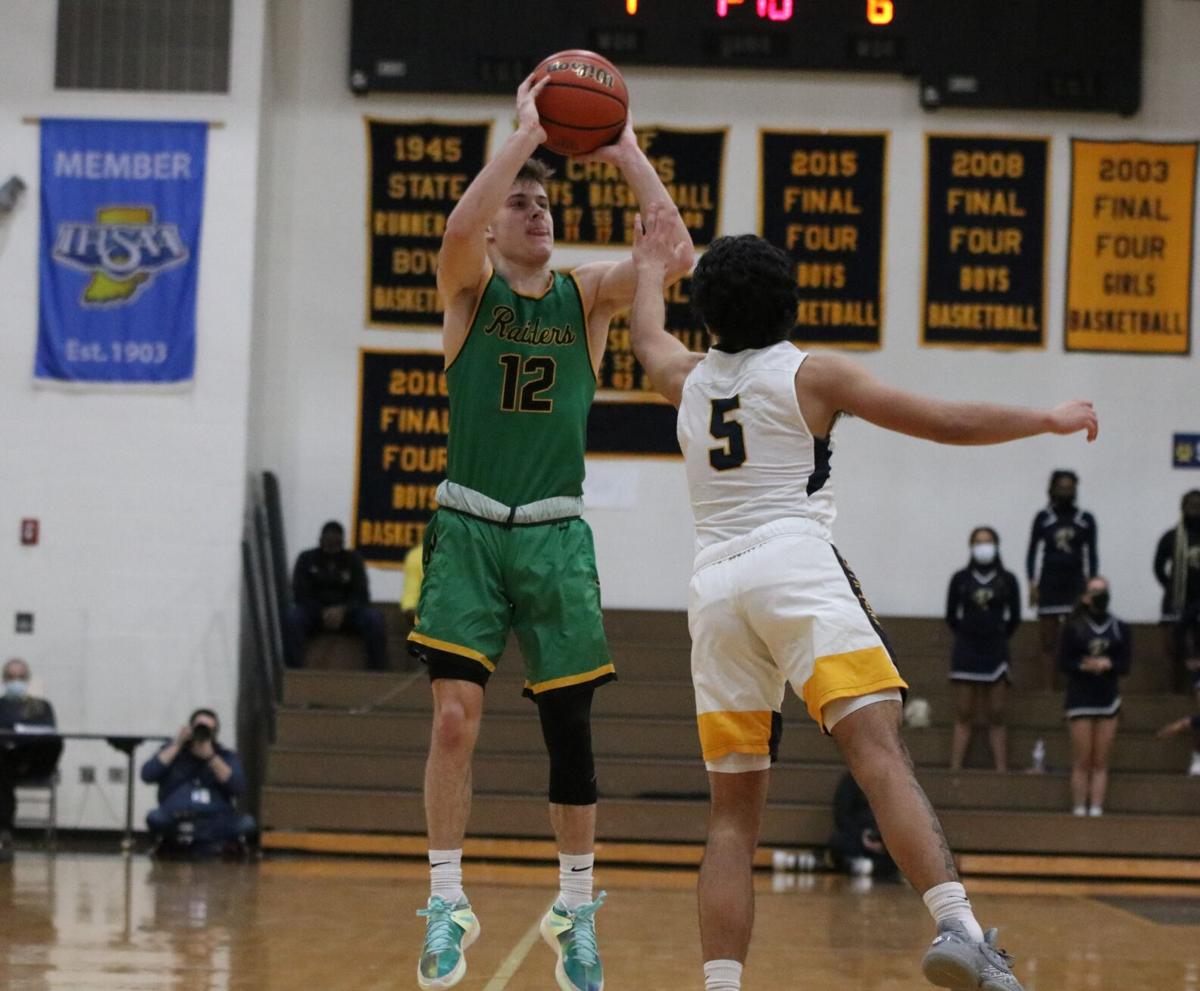 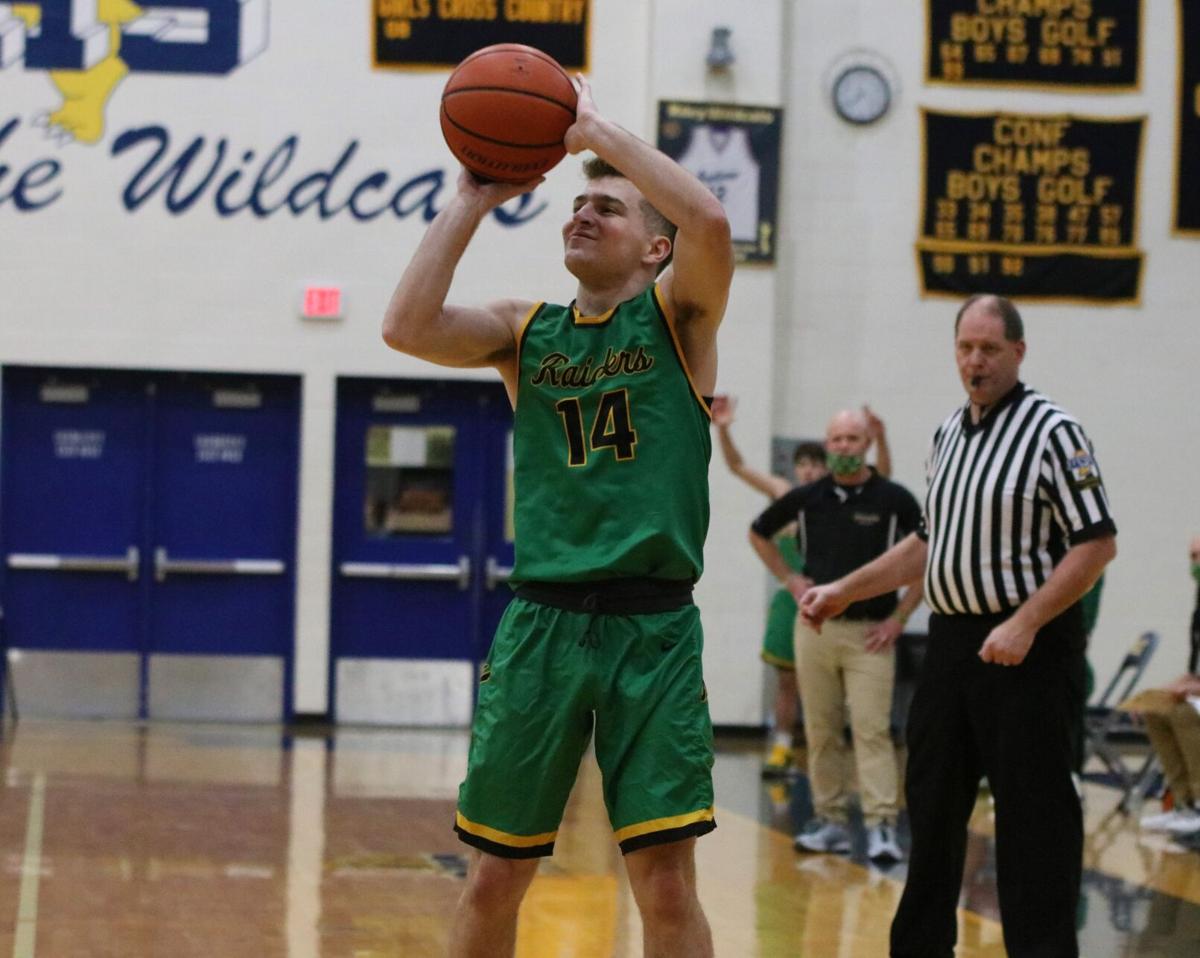 Northridge senior Clayton Stoltzfus shoots and makes a ‘3’ in the first half of Tuesday’s game against Riley in South Bend. 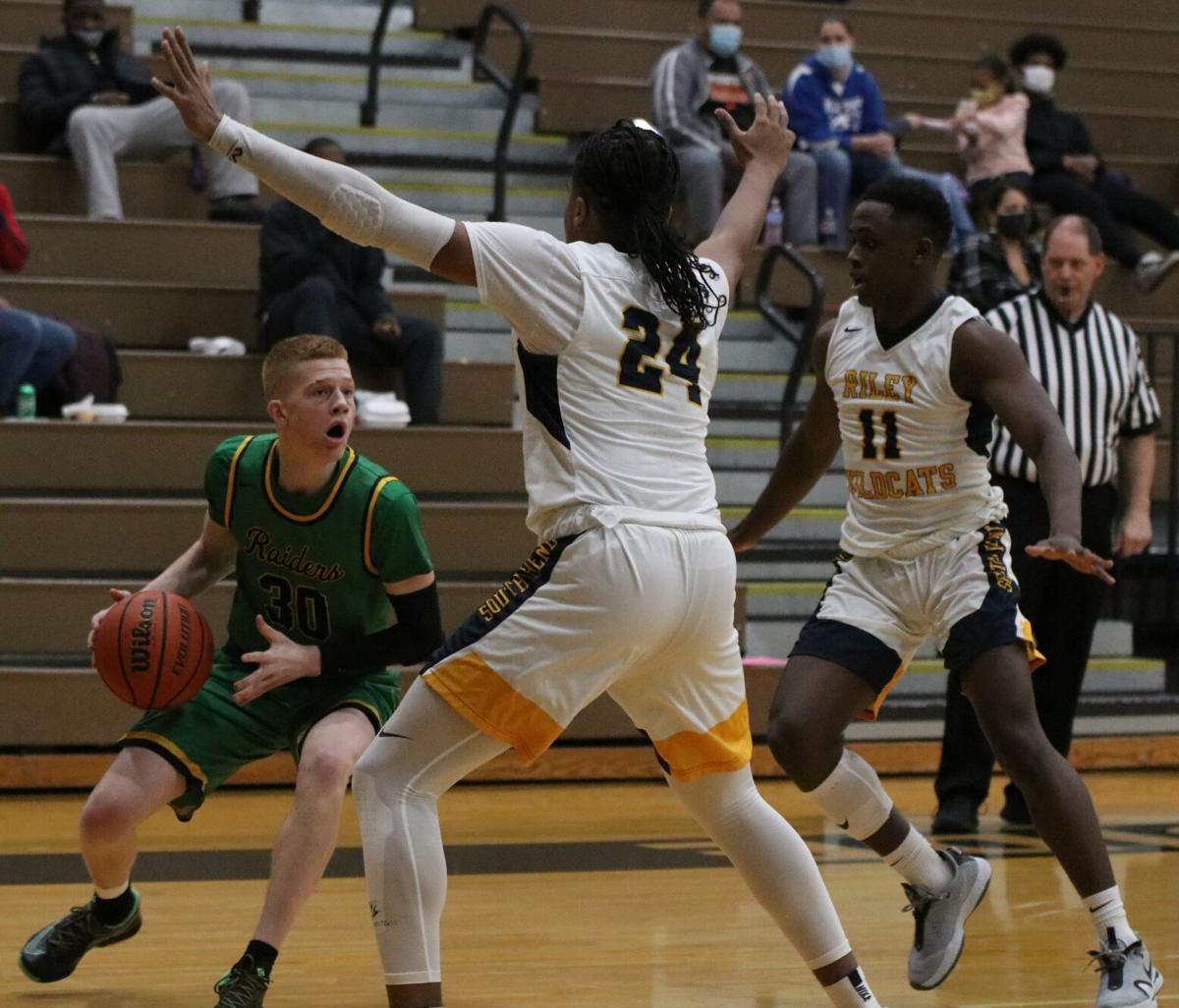 Northridge senior Sam Smith (30) looks to get around Riley senior Jackson Copley (24) and junior Isaiah Robinson (11) in the first half of Tuesday’s game in South Bend.

Northridge senior Clayton Stoltzfus shoots and makes a ‘3’ in the first half of Tuesday’s game against Riley in South Bend.

Northridge senior Sam Smith (30) looks to get around Riley senior Jackson Copley (24) and junior Isaiah Robinson (11) in the first half of Tuesday’s game in South Bend.

SOUTH BEND — Clay Stoltzfus never had a doubt in his team.

Down 41-30 to South Bend Riley with 3:41 remaining in the third quarter, it seemed as if Northridge was on its way to a second-straight loss.

Instead, though, Stoltzfus and the rest of his Raiders team responded with an offensive flurry, ending the game on a 31-13 run to pull off a 61-54 road victory over the Wildcats on Tuesday in South Bend.

“There’s no quit in this team,” Stoltzfus said. “We get knocked down 100 times, we get up 101 times. So, you just have to continue to play … You just keep battling and keep battling. It’s not over until there’s triple zeroes on the clock.”

The rally started on a ‘3’ from senior Sam Smith with 3:03 to go in the third. Stoltzfus then hit a three-point shot of his own to cut the deficit to five. With 52 seconds to go in the frame, Stoltzfus drilled another ‘3’ to make it a 41-39 game. On the next Riley possession, Stoltzfus’ twin brother, Carter, stole the ball and made an easy layup, tying the game at 41 heading into the fourth quarter.

Less than 30 seconds into the final frame, Smith sank another triple to give Northridge a 44-41 lead, their first advantage since midway through the second quarter (19-17). The 14-0 Raider run was finally ended on a three-point play from Wildcat senior Blake Wesley, tying the game at 44 with 4:58 remaining.

While Riley would tie the game at that moment, that’s the closest they would be the rest of the game. Smith sank two free throws to put the Raiders ahead for good with 4:44 to go in the contest. A minute later, junior Blake Jacobs made a layup off an offensive rebound to put Northridge up four points.

Riley eventually worked the deficit to one point, 53-52, with 2:03 left in the game. That’s when Carter Stoltzfus would step up for Northridge, hitting a huge ‘3’ to give his team a two-possession lead. Six seconds later, Wesley was called for an offensive foul while trying to drive to the hoop. The Stoltzfus twins would then make five-straight free throws in the final minute to ice the game away.

Northridge improves to 6-3 with the win, while Riley falls to 7-4.

“This game right here shows our guys that we can play with anybody,” Northridge coach Scott Radeker said. “Our guys are as tight-knit as it comes, and our culture is where it needs to be. These guys trust each other, they keep playing through stuff and several of them, right after the game, said, ‘That’s a big win’ just with intensity.”

Clay Stoltzfus finished the game with 19 points on six ‘3’s’ and one made free throw. The senior said the defense Riley was playing helped him get open and make shots.

“As soon as we got the ball, I saw a ‘triangle and two’ (defense) and my eyes kind of lit up because for the past two practices, we’ve been working against a ‘triangle and two,’” Clay Stoltzfus said. “When they’re going to take away guys like Carter and Sam, somebody has to step up and make shots, and I was able to do that tonight.”

Meanwhile, Carter Stoltzfus had 14 points, with seven of those coming in the final 90 seconds of the game. Having both Stoltzfus brothers playing well is a huge plus for Northridge.

“They just have a sixth sense for each other and knowing where people are going to be at, knowing where they’re going to cut,” Radeker said. “A part of that is their twins — they’re supposed to have that, right?”

It was a tightly contested first half between the two teams, with each team’s largest lead only reaching five points. Riley led 29-26 at halftime before opening the third quarter on a 12-4 run, allowing them to build that 11-point cushion.

Northridge was successful in slowing down Wesley, who’s signed to play collegiately at Notre Dame. The Wildcat senior was held to 19 points, just the second time this season he hasn’t reached 30 in a game.

“Early on, the goal was to get him to shoot the ‘3,’ which he did,” said Radeker on the strategy to slow down Wesley. “He wasn’t penetrating the zone (defense) a lot until it got late. Once he got through the zone a little bit, we wanted to run at him and trap him with our top two guys a little bit.”

Along with the Stoltzfus’ scoring output, Smith had 15 points, Jacobs 10 and senior Trevor Brown three to pace the Raiders, who now get set for a huge Northern Lakes Conference showdown with NorthWood on Friday night in Middlebury. Clay Stoltzfus is hoping the win over Riley sparks his team for the second half of the season.