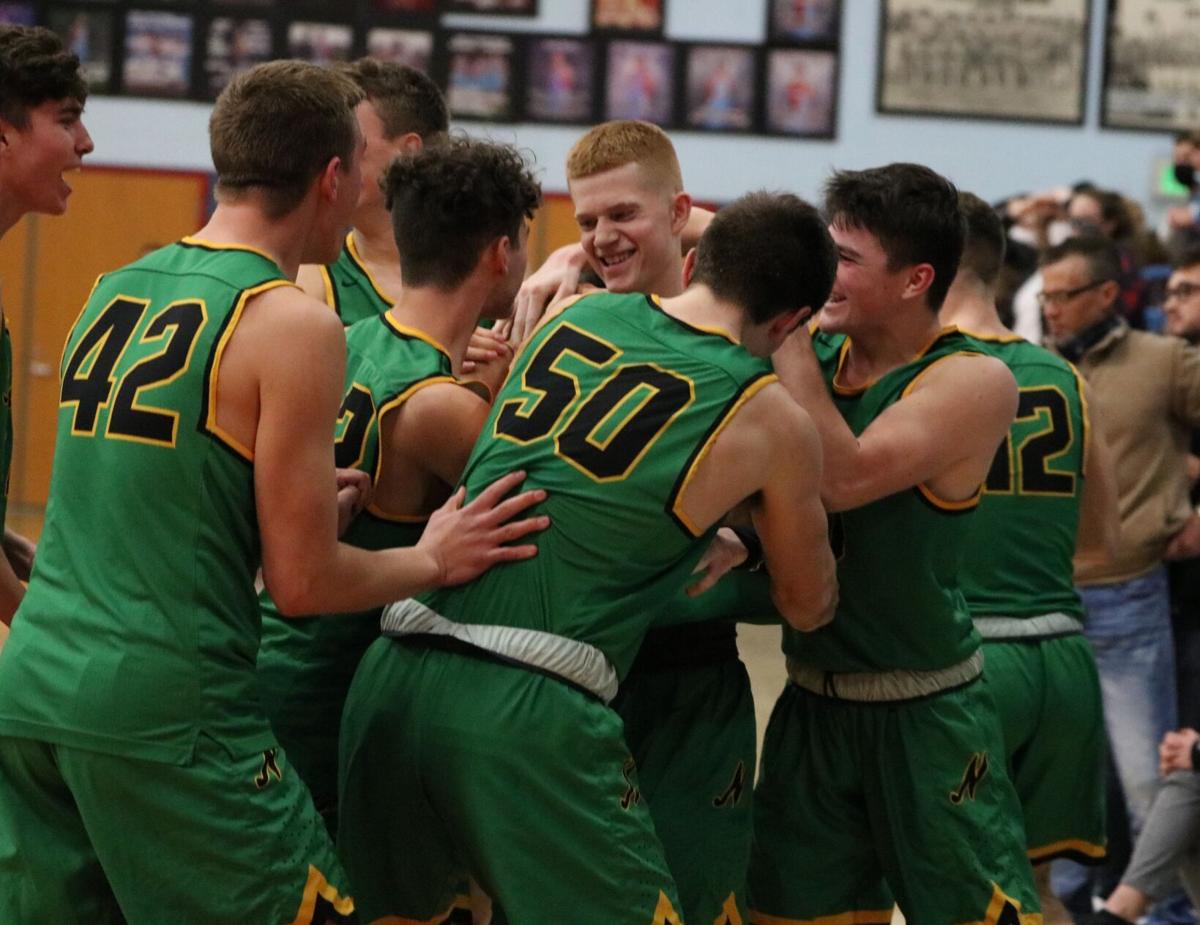 Northridge senior Sam Smith, center, gets mobbed by his teammates after making the game-winning 3-point shot to beat Lakeland, 65-62 in overtime, Thursday at Lakeland High School in LaGrange. 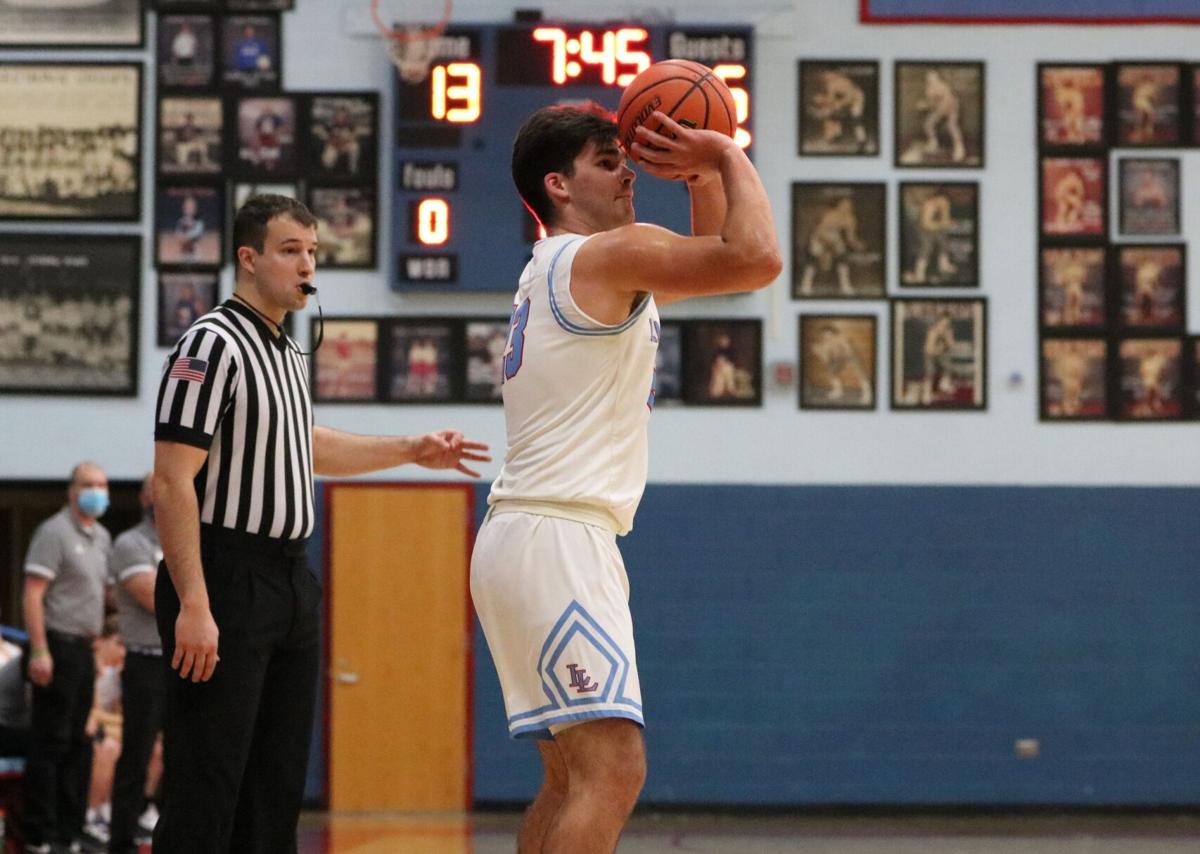 With this 3-point shot in the second quarter, Lakeland senior Brayden Bontrager became the boys basketball all-time leading scorer in Lakeland history. The shot came in a 65-62 overtime loss to Northridge Thursday at Lakeland High School in LaGrange. 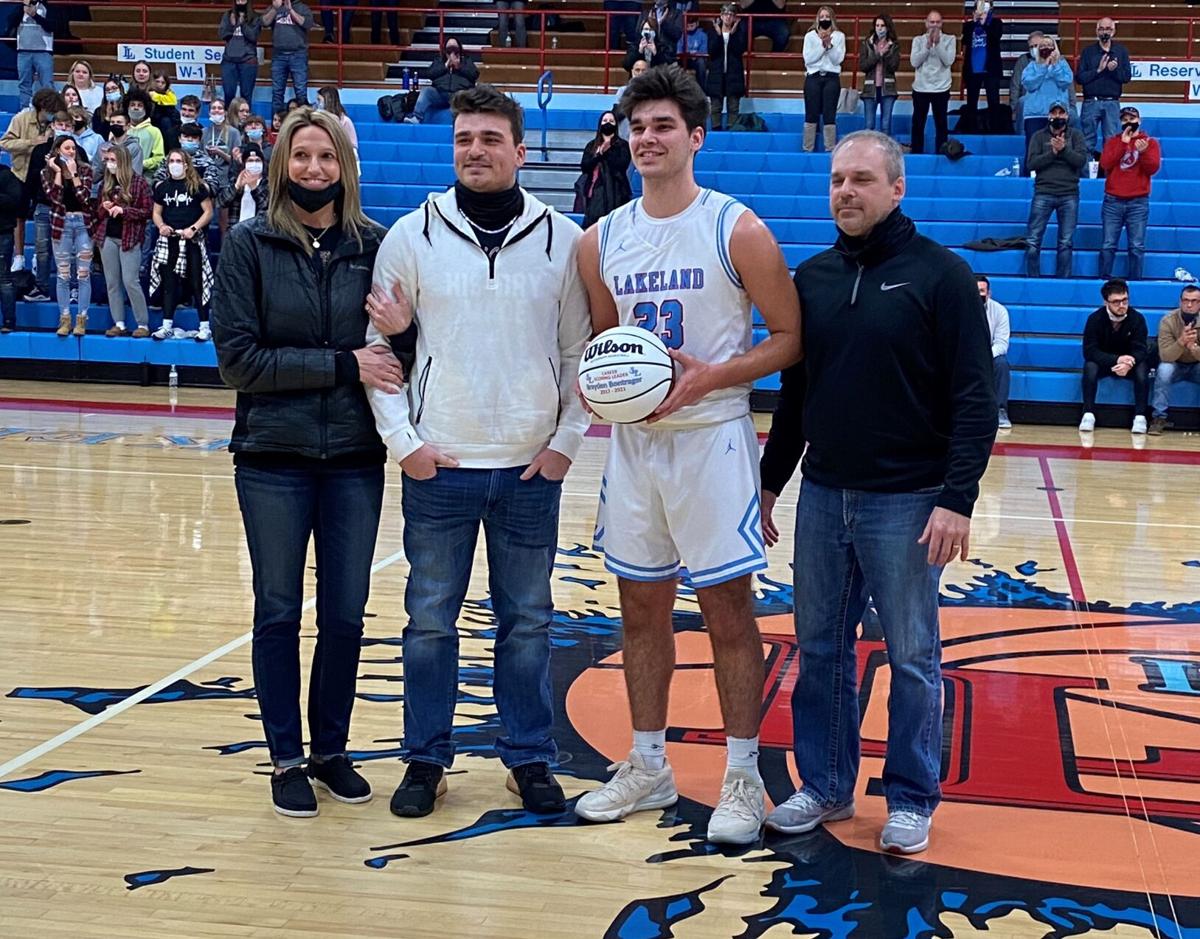 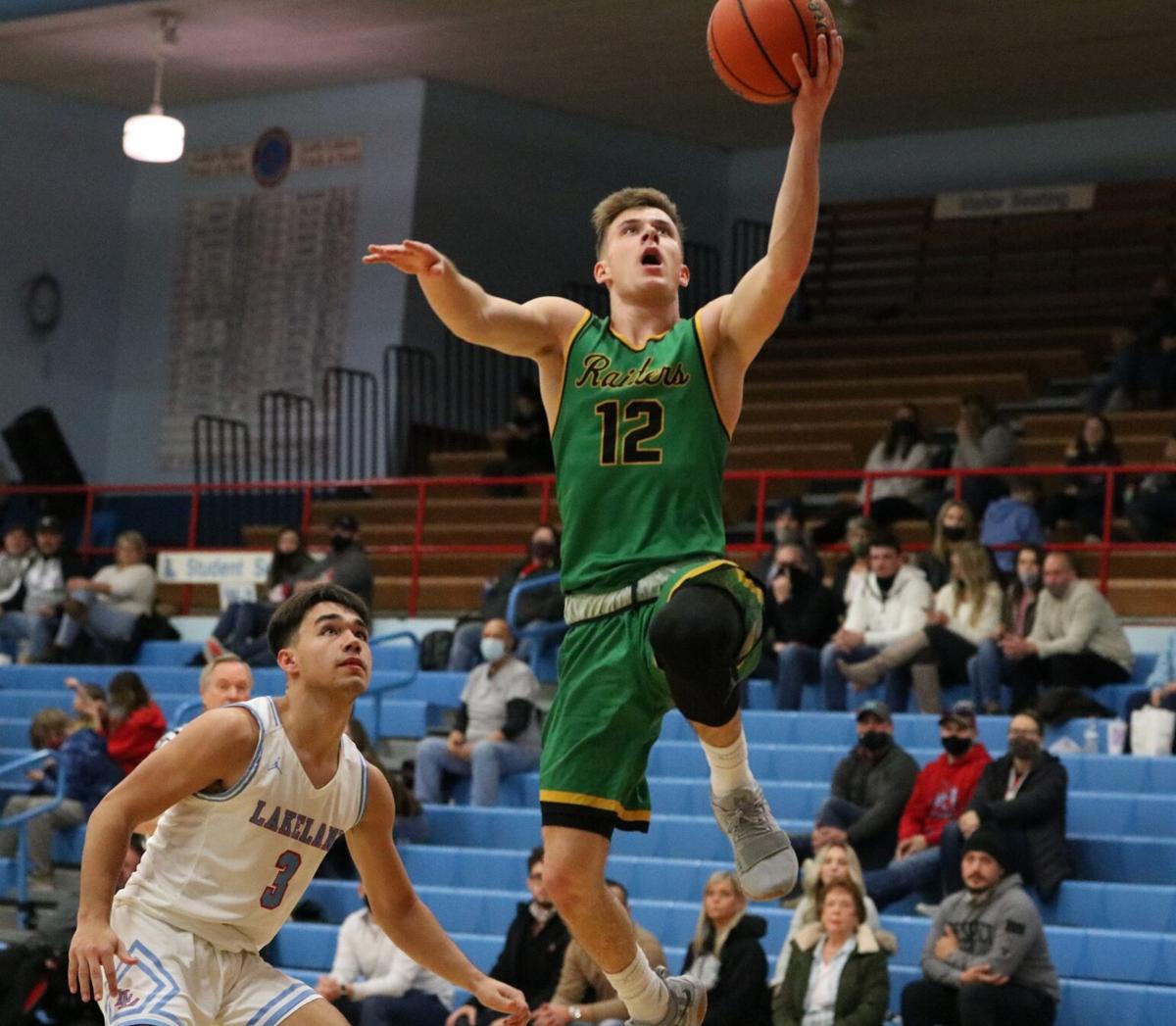 Northridge senior Carter Stoltzfus (12) goes up for a layup during Thursday’s game against Lakeland in LaGrange.

Northridge senior Sam Smith, center, gets mobbed by his teammates after making the game-winning 3-point shot to beat Lakeland, 65-62 in overtime, Thursday at Lakeland High School in LaGrange.

With this 3-point shot in the second quarter, Lakeland senior Brayden Bontrager became the boys basketball all-time leading scorer in Lakeland history. The shot came in a 65-62 overtime loss to Northridge Thursday at Lakeland High School in LaGrange.

Northridge senior Carter Stoltzfus (12) goes up for a layup during Thursday’s game against Lakeland in LaGrange.

LAGRANGE — Sam Smith is always confident in his shot.

That confidence shone through in a big way Thursday night in LaGrange.

With 3.8 seconds separating Northridge and Lakeland from a second overtime, Northridge senior Carter Stoltzfus brought the ball up court. Double teamed, he turned around and passed to Smith, who hurled a shot from 30-plus feet off the backboard and in as the buzzer sounded, giving the Raiders a 65-62 overtime win over the Lakers on the road.

For good measure, Smith was fouled on the play. He made the free throw, but it didn’t count since the point did not factor into the result of the game.

“We’re always looking to get Carter the ball, and he got open a little bit but then they doubled him,” said Smith, recalling the final play. “He’s such a tough player to stop, so he drew two (defenders) and I found a little opening. It was a little deep, but I always have confidence I can knock it down. … I have trust in my shot and my teammates have trust in me. I’ve put in the amount of work to knock down those shots, and that’s why I’ve got confidence.”

“What we told them (in the timeout) was we wanted to throw it into Carter, get it to Sam and have him try and bank-in a ‘3.’ Just exactly how we drew it up,” Radeker said. “No, we were just trying to get it into Carter’s hands and let him make a play. With 3.8 seconds left, we thought there was plenty of time.”

Smith’s heroics were set up by a heads-up play from Stoltzfus moments before. Lakeland called timeout with 8.5 seconds left in overtime, hoping to get the final shot of the game. The Raiders’ defense was stout, though, and the ball was tipped and heading out of bounds. Instinctively, Stoltzfus jumped for the ball and called timeout in mid-air before landing out of bounds. This meant it was a Laker turnover and Northridge ball with 3.8 seconds left.

“The guys’ wanted to go with a 1-3-1 (zone defense), and we went with it. Carter got a great trap on the pass coming out of the corner and was heads-up enough to call that timeout,” Radeker said. “We were able to sneak out of here with a win.”

The game reached overtime in large part to a fourth quarter flurry from the Raiders. Trailing 54-47 with 2:39 left, Northridge scored nine unanswered points in 57 seconds to take a 56-54 lead.

“We were just trying to get a good shot and keep ourselves alive in the game, whether it was a ‘2’ or ‘3,’” said Radeker of his team’s run to take the lead. “We’re capable of hitting shots in a row like that; we’ve done it before. Thankfully, at the right time, we were able to get the bang-bang-bang and get us back in the game and give us the lead.”

Smith finished with 23 points to lead Northridge (15-4), who have now won seven-straight games. Stoltzfus had 19, junior Blake Jacobs nine, senior Clay Stoltzfus eight and seniors Trevor Brown and Brandon Miller three each. The Raiders visit Columbia City Saturday, where Smith will have a chance to reach 1,000 points for his career. The senior currently is four points away from reaching the milestone.

“I’ve looked up to my big brother for a long time. I got to play with him with my freshman year, and it was the best moment of my life,” Bontrager said. “We got to compete for a sectional championship … just to have (my family) here tonight, it’s just a blessing. He’s just a great brother to have.”

Bontrager finished with a game-high 31 points, bringing his career total to 1,549 points.

Despite the loss, Bontrager was proud of the effort his team showed against a very talented Northridge team.

“It was unbelievable,” Bontrager said. “I mean, we played one of the best teams in the NLC conference right now. That’s a tough conference and they’re a really strong team. I just think we came out and we played like dogs tonight.”