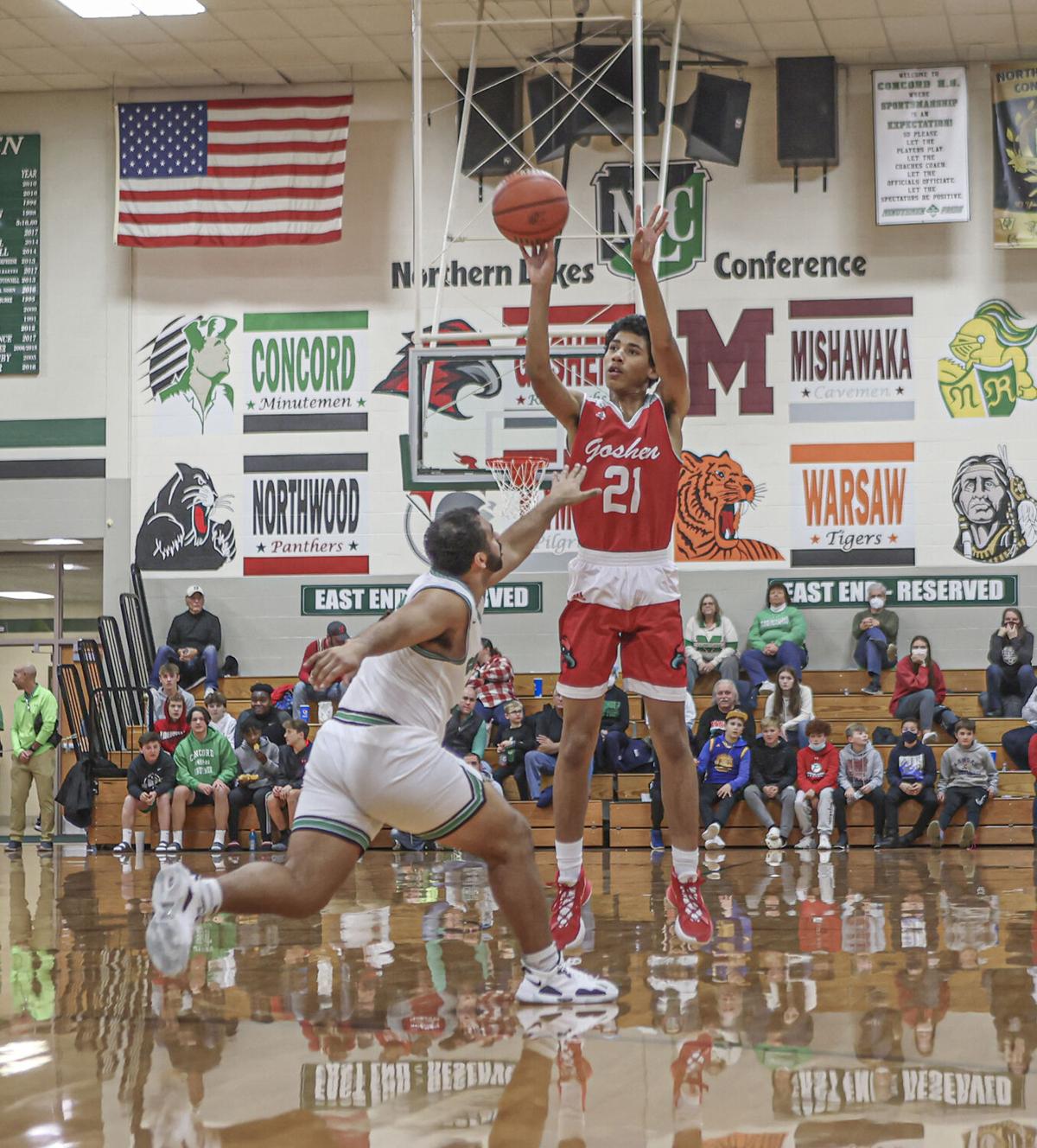 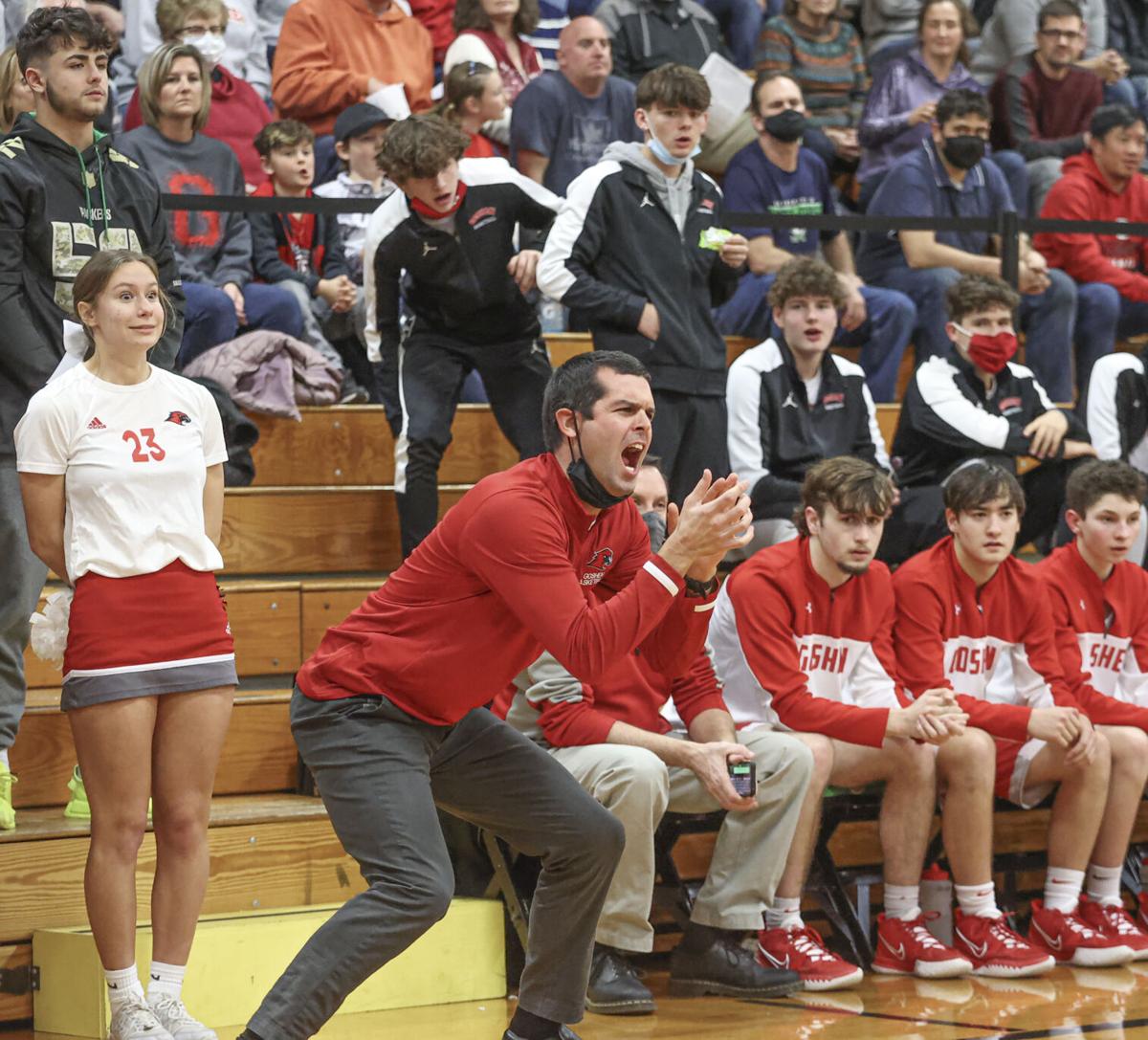 Goshen head coach Michael Wohlford gets excited after a play during last Friday night’s victory over Concord in Dunlap.

Goshen head coach Michael Wohlford gets excited after a play during last Friday night’s victory over Concord in Dunlap.

GOSHEN — Through two weeks of Northern Lakes Conference boys basketball play, four teams spot 2-0 conference records, while the other four are 0-2. This leaves a four-way tie for first atop the conference standings — and a four-way tie at the bottom of them as well.

That four-way tie at the top will be down to no more than three by the end of Friday, though, as Goshen (9-1, 2-0 NLC) makes a road trip to Warsaw (7-4, 2-0 NLC) in a game that is expected to play a big factor in who ultimately wins the NLC championship.

This is the first time Goshen has started 2-0 in NLC play since the 2015-16 season. They wound up losing to Warsaw in their next conference game that season and finished 3-4 in league play. The last time Goshen was 3-0 in NLC action was the 2000-01 campaign.

Warsaw leads the all-time series over Goshen, 72-42. Last year’s regular season game was a tight one, as the Tigers escaped Goshen with a 48-38 win. The RedHawks last beat Warsaw in the 2018 sectional opener, 58-45. Goshen hasn’t beaten the Tigers in the regular season since Jan. 11, 2013.

“I think we’re just excited for the opportunity to be in a game like this,” Goshen coach Michael Wohlford said. “The kids have performed well enough to play in a game that has some conference implications. We know what we’re up against; it’s a really good team, it’s a really good tradition, really good players, excellent coaching staff. I think it’s just been a normal week in the sense we’re prepping for a game, but I think the kids are excited that it feels like it matters a lot.”

The RedHawks come into Friday’s game the hottest team in the conference, winners of eight-straight games overall. They cruised to a 53-32 victory over Concord in their last outing seven days ago, building the lead to as many as 25 in the contest.

The consistent play of Goshen’s starting guards of senior Drew Hogan and junior Quinn Bechtel have been one of the biggest keys for success this season so far for the RedHawks. Hogan leads the team with an average of 13.8 points per game, while Bechtel is the team leader with averages of 5.1 rebounds and four assists a contest.

Not only has their on-court production been important, but their work ethics have also been keys for the RedHawks’ success, according to Wohlford.

“When your leaders are all business, I think everybody follows,” Wohlford said. “You couldn’t have two more workman-like leaders in Drew Hogan and Quinn Bechtel. Their habits are just really, really strong, and everyone has just kind of fed off that all week.”

Goshen now prepares for a Warsaw team that lost to No. 8 (Class 4A) Penn, 71-59, Tuesday. The Tigers didn’t have Jaxson Gould for the game, as the 6’2” junior guard sat out the game for precautionary reasons. Gould has blossomed into one of the best players in the NLC this season, as evident by his 28-point, 13-rebound performance in a 61-47 win for Warsaw against Northridge last Friday.

“He’s a difficult matchup because he’s 6’2” and can play on the perimeter, but he’s their best interior scorer also,” said Wohlford of Gould. “So, he can score all over the floor. He’s very good at going really hard and then getting under control.”

“Warsaw just does such a nice job of finishing at the basket area,” Wohlford said. “It’s not just (Gould); it’s Simfukwe and Heckaman. They’re almost an inverted team in that their bigger player actually shoots most of his shots on the perimeter, and their guards do most of their damage on the inside. Simfukwe and Heckaman are both scoring a lot this year, but they’ve only hit two ‘3’s’ combined.”

In order to leave The Tiger Den with a victory, Wohlford knows his team will have to match Warsaw’s physicality.

“Executing, offensively, the way we need to play against their style of defense is very important,” Wohlford said. “They’re physical; they don’t like to switch. … Playing a physical offensive style is going to be really key to getting the shots we need to have a chance to win the game. If we play, offensively, trying to get away from contact, we’ll really have a tough time.”

The scheduled game between Mishawaka (7-2, 2-0) and Wawasee (4-7, 0-2) has been postponed due to COVID issues. A rescheduled date for that game has not yet been determined.

No teams from The Goshen News coverage area made it to the semifinals of the Northeast Corner Conference basketball tournaments, meaning Fairfield, Lakeland, West Noble and Westview all have the weekend off. Regular season games resume for those schools Tuesday.