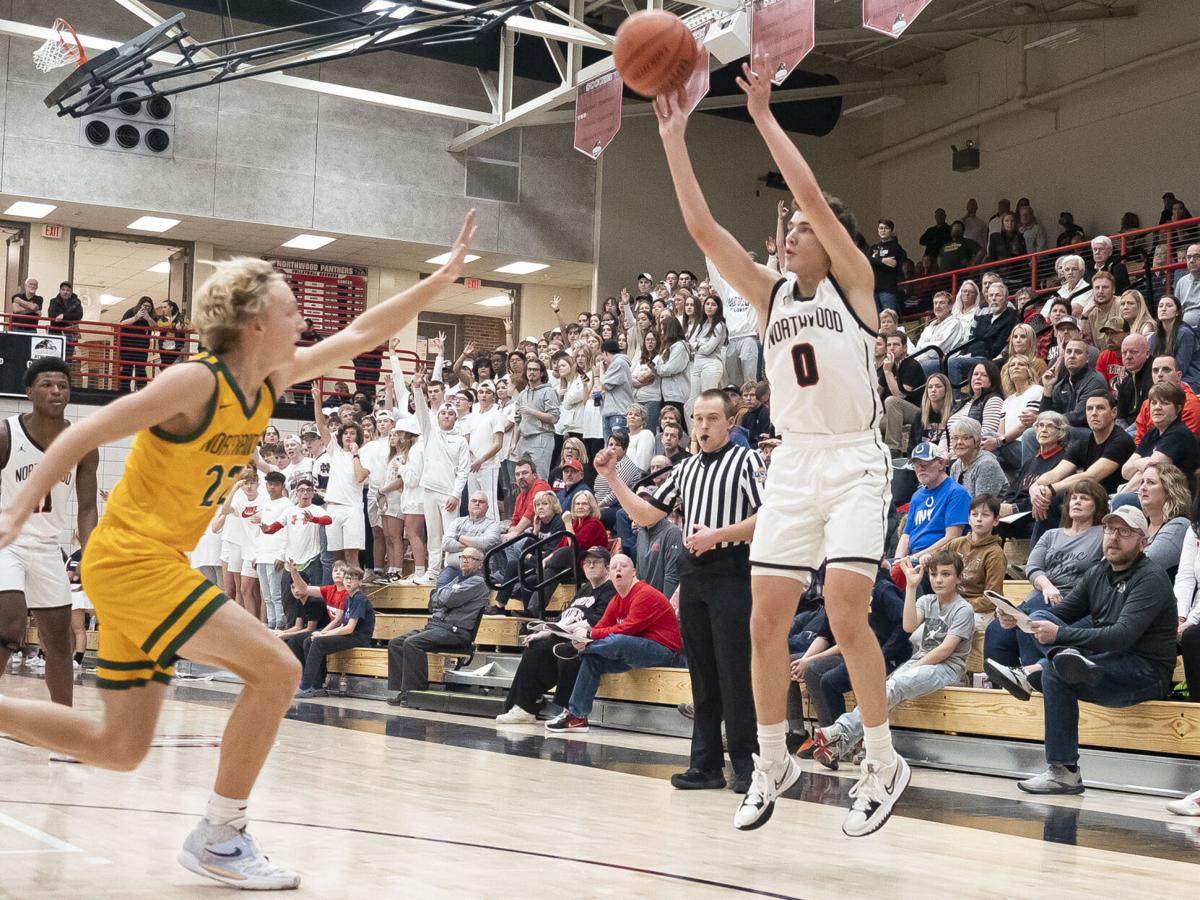 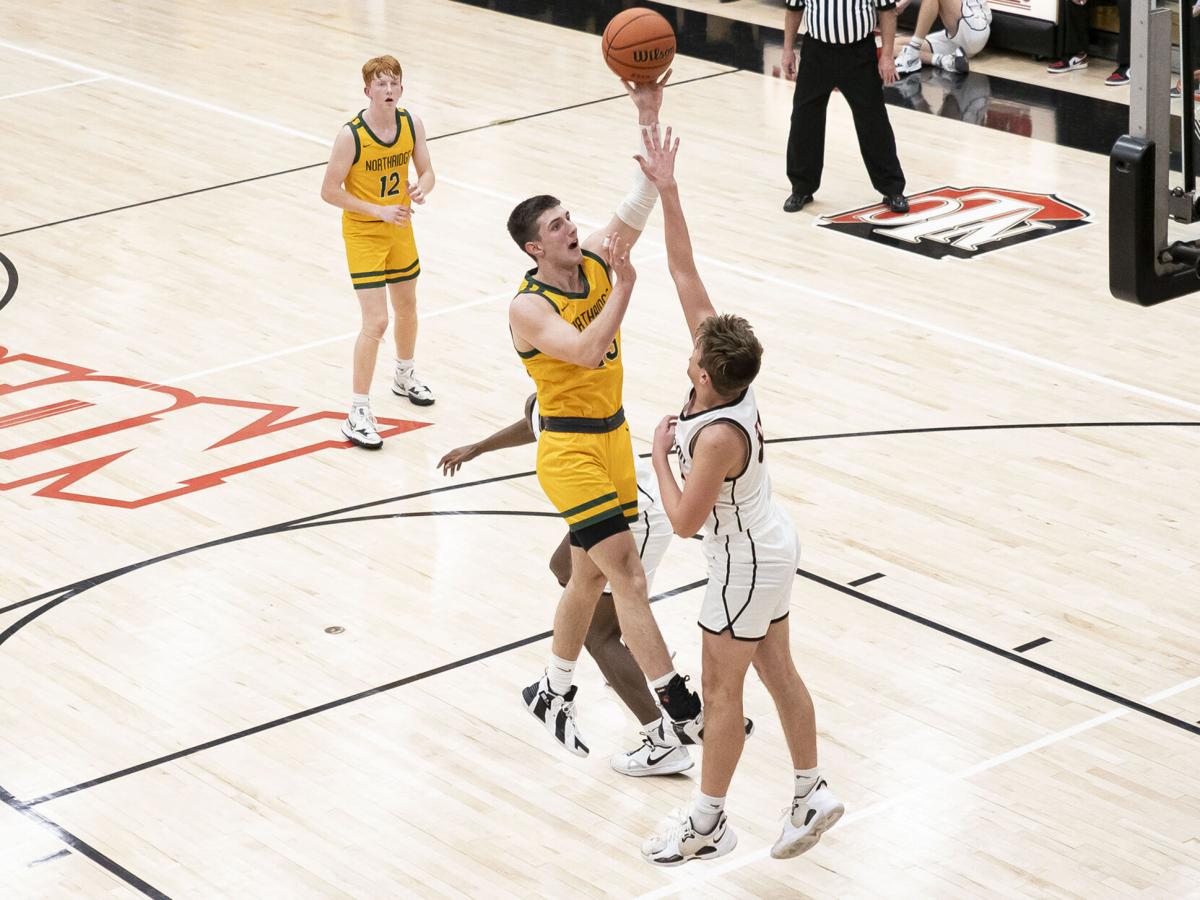 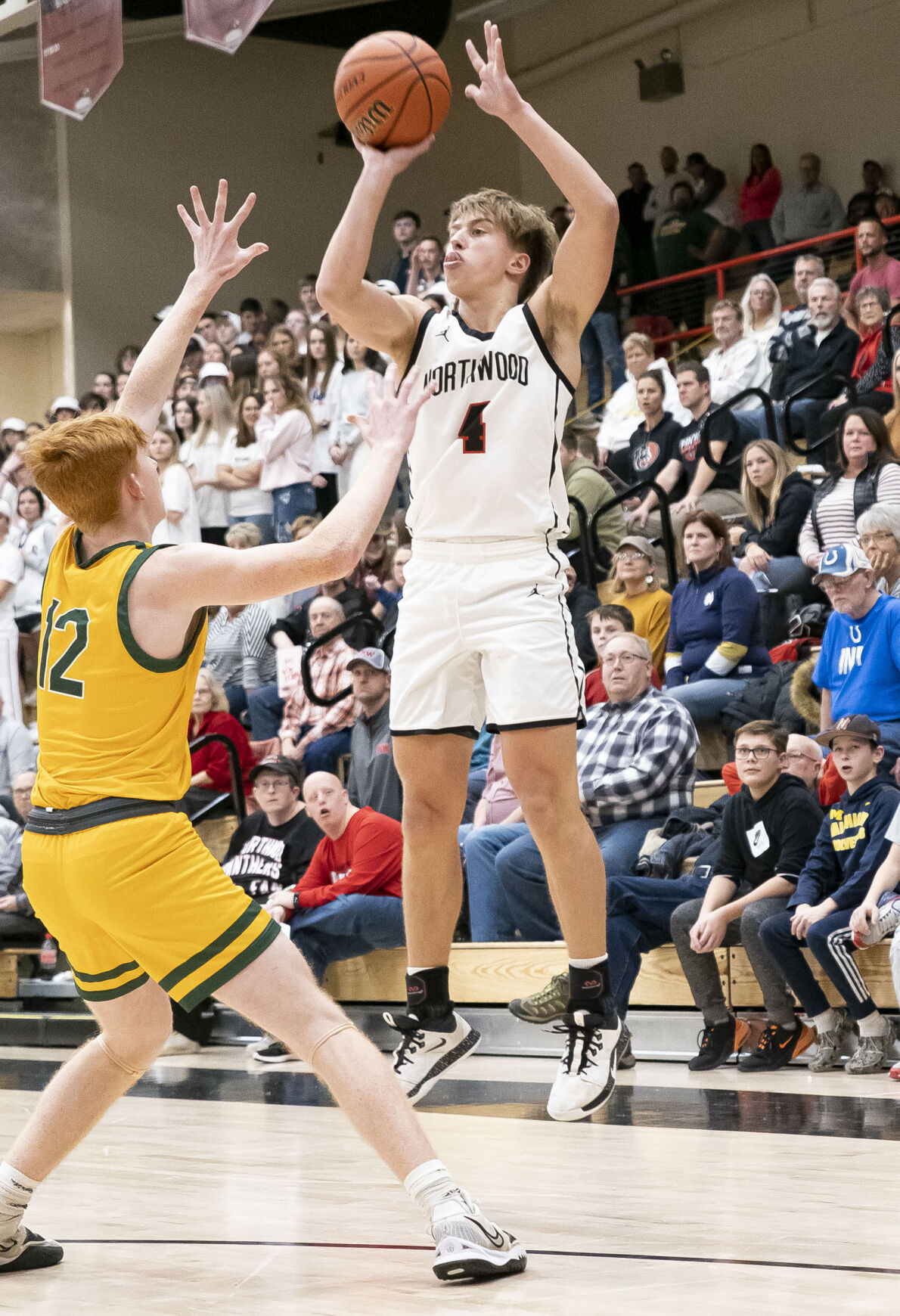 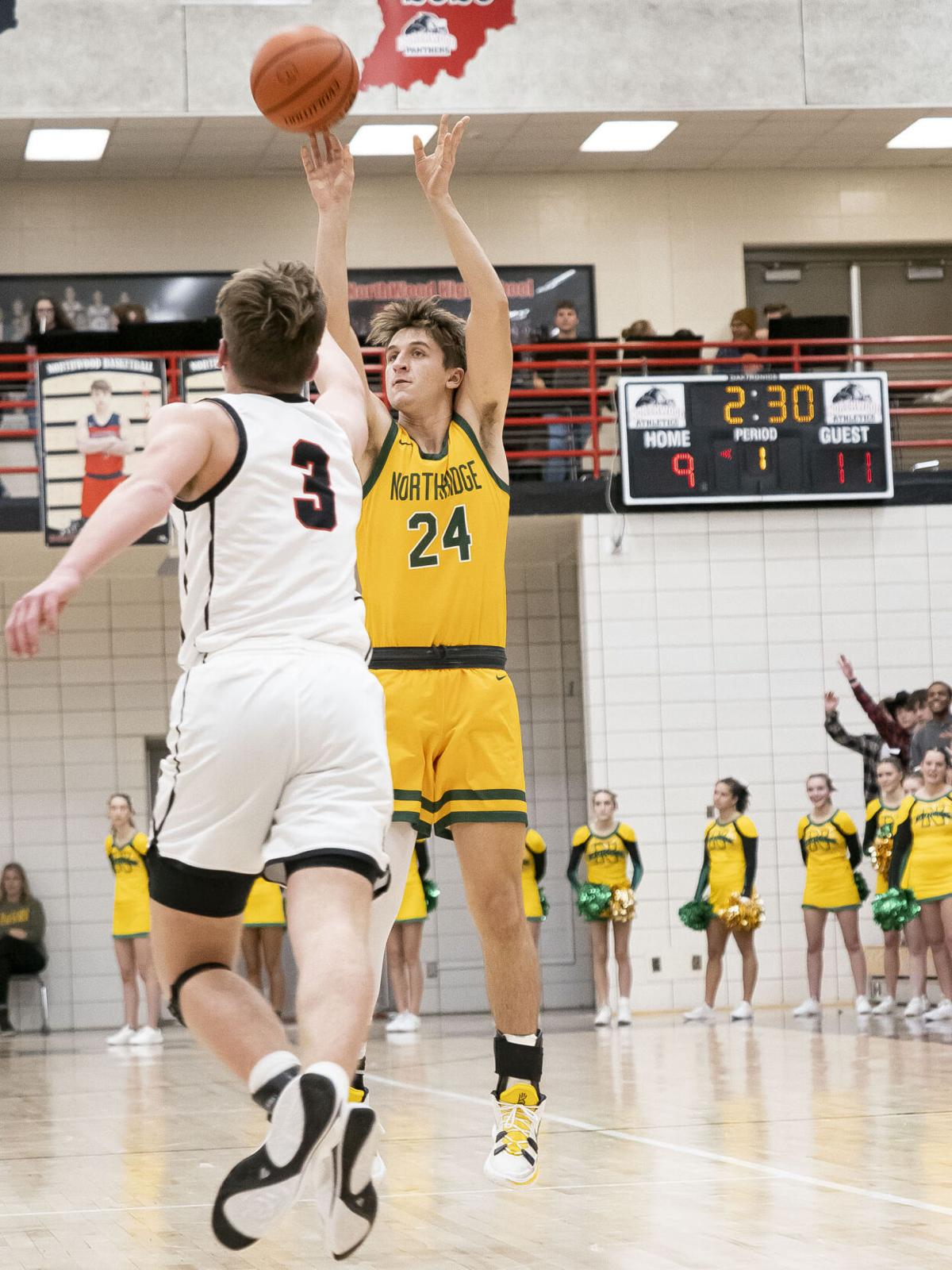 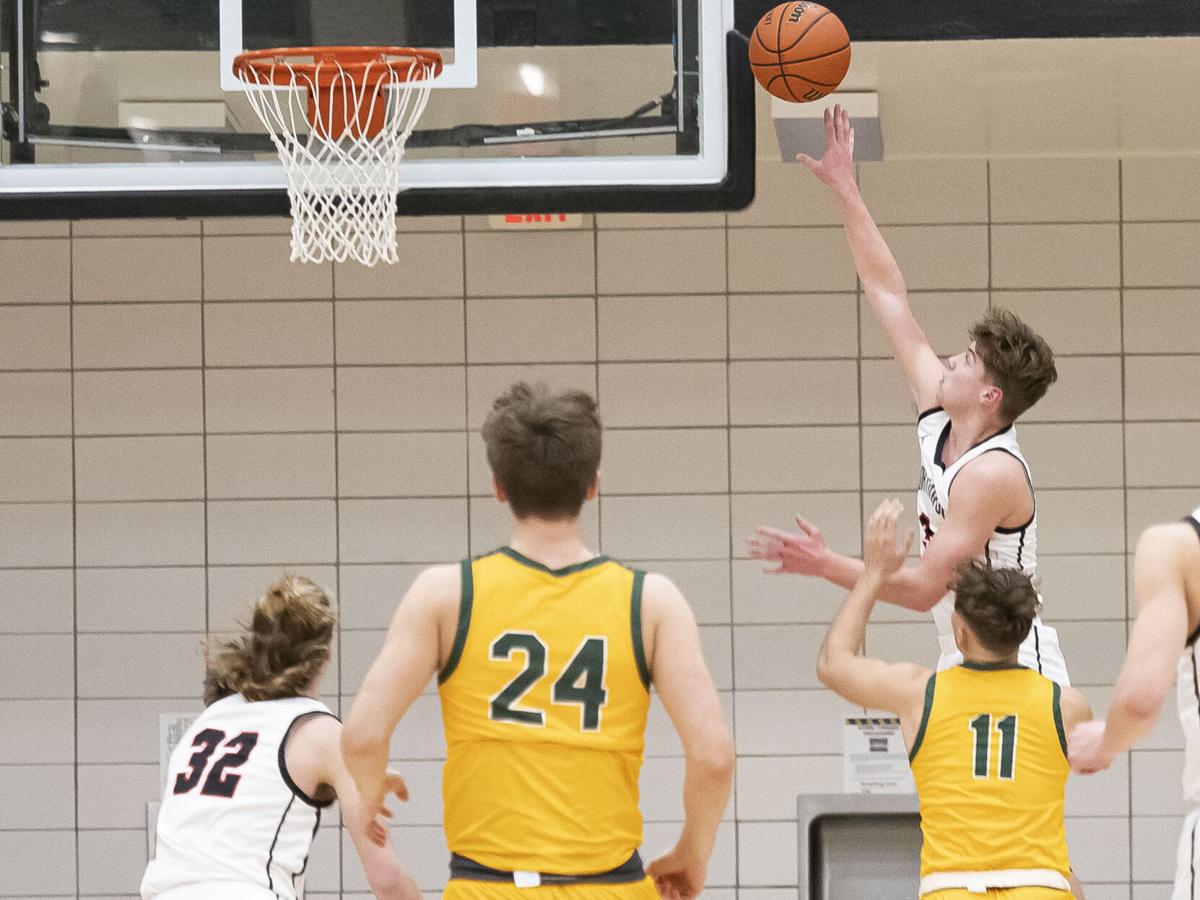 NorthWood junior Cade Brenner (3) goes up for a layup during Friday's game against Northridge at NorthWood High School in Nappanee. 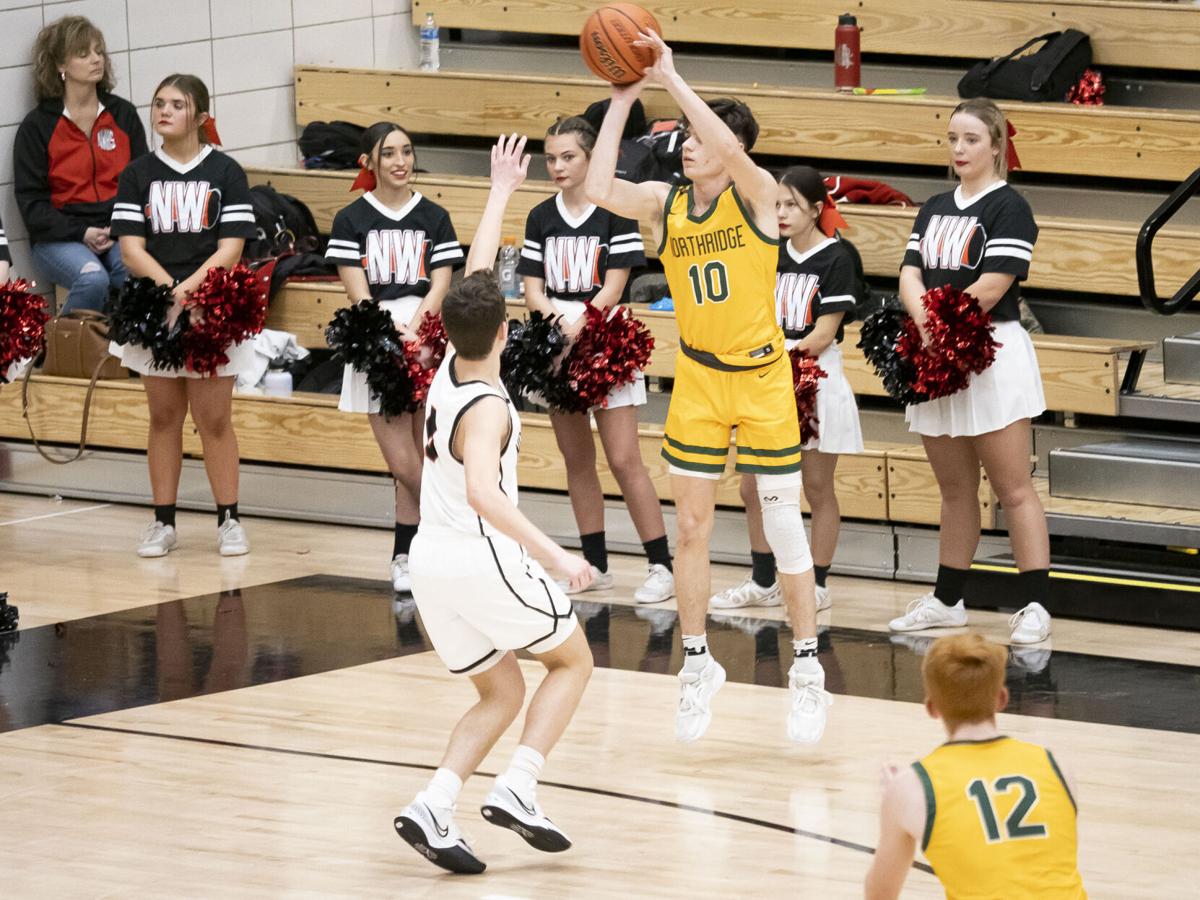 NorthWood junior Cade Brenner (3) goes up for a layup during Friday's game against Northridge at NorthWood High School in Nappanee.

NAPPANEE – With under a minute to go, and the game tied at 46, NorthWood took possession of the ball.

Just a minute after leading scorer Cade Brenner fouled out of the game, the Panthers needed an answer from somebody else.

Left open from beyond the arc on the left side, Wolfe spotted up off a pass and nailed the trey to give his team the three-point advantage with 46 seconds to go.

“I’m proud of him,” said NorthWood head coach Aaron Wolfe of his son’s shot. “It’s rare that you get to coach your son. He’s growing as far as his confidence and maturity. And miss or make, I was proud that he took the open shot. That was a proud dad moment.”

Northridge would cut that lead to one after senior Blake Jacobs knocked down a couple of free throws with less than 30 seconds left. The Raiders would get one more shot at winning with just eight seconds to go, but senior Micah Hochstetler’s desperation ‘3’ from the right corner came up short at the buzzer, handing the home team a dramatic 49-48 Northern Lakes Conference victory.

“What happened there was not what we drew up,” said Northridge head coach Scott Radeker of the final possession. “I’m regretting not calling a timeout there. I probably should’ve. We switched the play to a high ball-screen play, and we didn’t make the right read. First, we didn’t get to the screen to use it. We didn’t make the right read, and it just fell apart. That’s a play we’ve run a million times, but again, I should’ve called a timeout.”

The Raiders (3-8, 0-3 NLC) got out to a scorching start at the start of the game by going on an 11-2 run within the first four minutes of the contest. The Panthers (13-1, 3-0 NLC) quickly woke up from its early game fog though and started chipping away.

Behind a ‘3’ from Ethan Wolfe and six points from Brenner, NorthWood managed to tie the game before the end of the first quarter.

During the second eight minutes of play, the Raiders continued their inspired play by punching the Panthers right in the mouth again. Northridge went on a 7-0 run – finished off with a ‘3’ from freshman Kam Radeker – to make it 22-14 with five minutes to go before half.

The Raiders maintained a healthy lead heading into the final two minutes of the half, but a technical foul on Jacobs followed by Ethan Wolfe getting fouled on a three-point attempt during the possession after led to Northridge’s five-point lead completely evaporating within a 20-second period.

Despite the mistakes, the Raiders still led 29-26 at halftime.

In the second half, NorthWood had trouble guarding against the ‘3,’ as all 12 of Northridge’s points came from beyond the arc in the third quarter. Senior Malachi Campbell and Nolan Bales each knocked one down before junior Jethro Hochstetler buried a couple of his own to help the Raiders extend their lead to as many as 10 in the quarter.

That effort allowed Northridge to bring a 41-35 lead into the fourth quarter.

From there though, NorthWood senior Cooper Weins took over. Weins scored eight-straight points for his team, including back-to-back three-pointers to help his team tie the game at 43 with just over six minutes to go in the game.

“I thought that was the key,” said Aaron Wolfe of Weins. “We were down six there, and they were varying their coverages on different players. And Cooper stepped into two shots like a senior should and really carried us in those moments.”

After NorthWood tied the game, the Raiders held the ball on offense for over two minutes. Their patience eventually paid off when Kam Radeker stepped into a three near the top of the key to help his team regain the lead with just under four minutes to go.

From there, NorthWood junior Ian Raasch would tie the game again with a ‘3’ of his own from the left corner.

Although Brenner fouled out and gave Northridge a chance at a 1-and-1 opportunity, junior Noah Zmuda would miss the front end, leading to Ethan Wolfe’s opportunity from beyond the arc.

The Raiders would then have a couple opportunities to both tie and win the game down the stretch, but the shots didn’t fall. Jacobs led Northridge with 12 points, while Jethro Hochstetler was next with 11.

“The guys executed the game plan,” Scott Radeker said. “We won three quarters, but you have to play four. We didn’t win the fourth. They made a few more plays than we did. It was 46-46, and we were getting stop after stop, but then we’d either turn it over or take a bad shot. I’m proud of the guys for the effort, but we have to be able to execute down the stretch and take care of the ball in critical situations.”

Despite fouling out late, Brenner led his group with 15. Ethan Wolfe had 12 and Wiens finished with 11.

“In this one, we were fortunate enough to make some plays in the fourth quarter and come out on top,” Aaron Wolfe said. “These experiences are really healthy for your basketball team, and I think you need to learn how to play behind, and you need to play in tight ball games. And (Friday), we had to grind it out just to compete, and we ended up making some winning plays.”