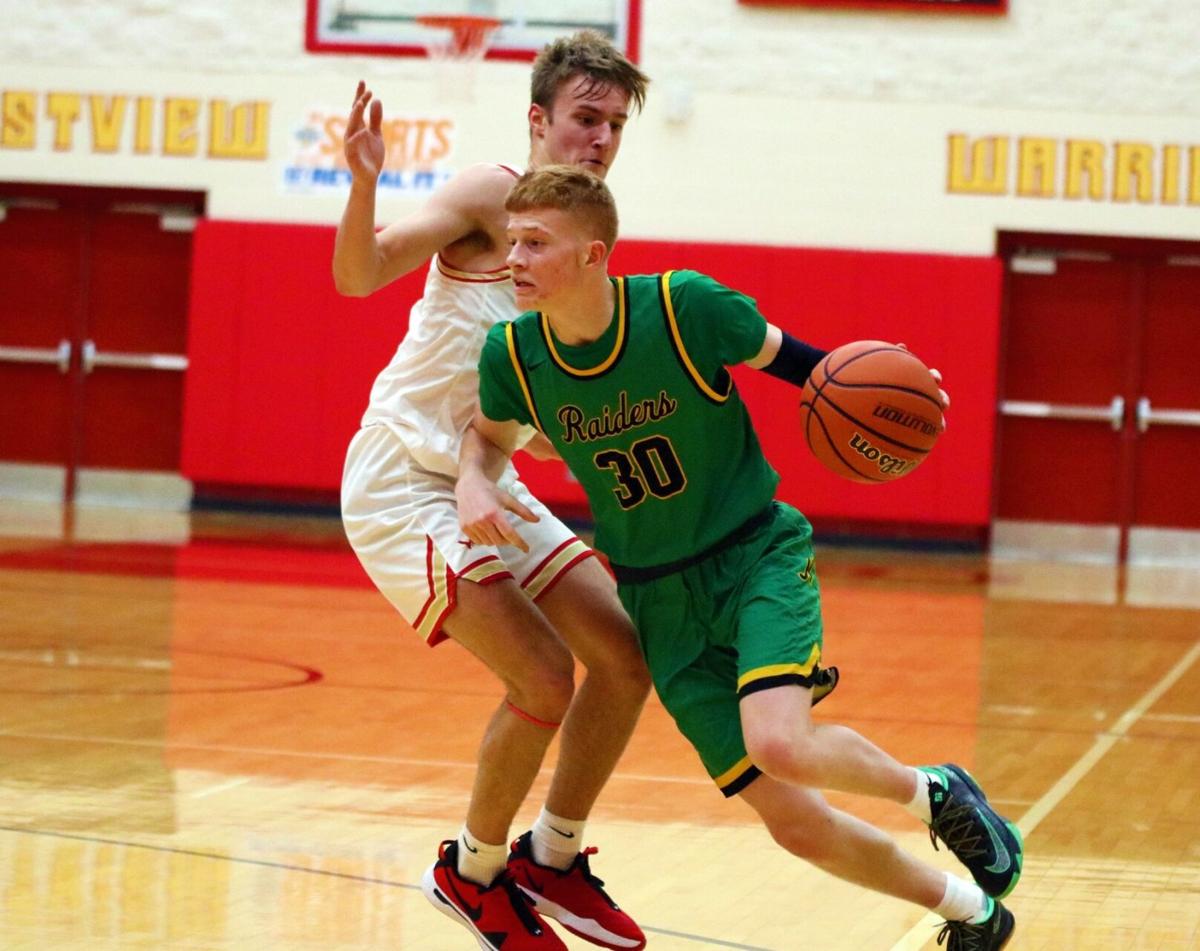 Northridge senior Sam Smith (30) drives past Westview senior Lyndon Miller in the second half of Northridge’s 66-59 victory over Westview Saturday in Topeka. 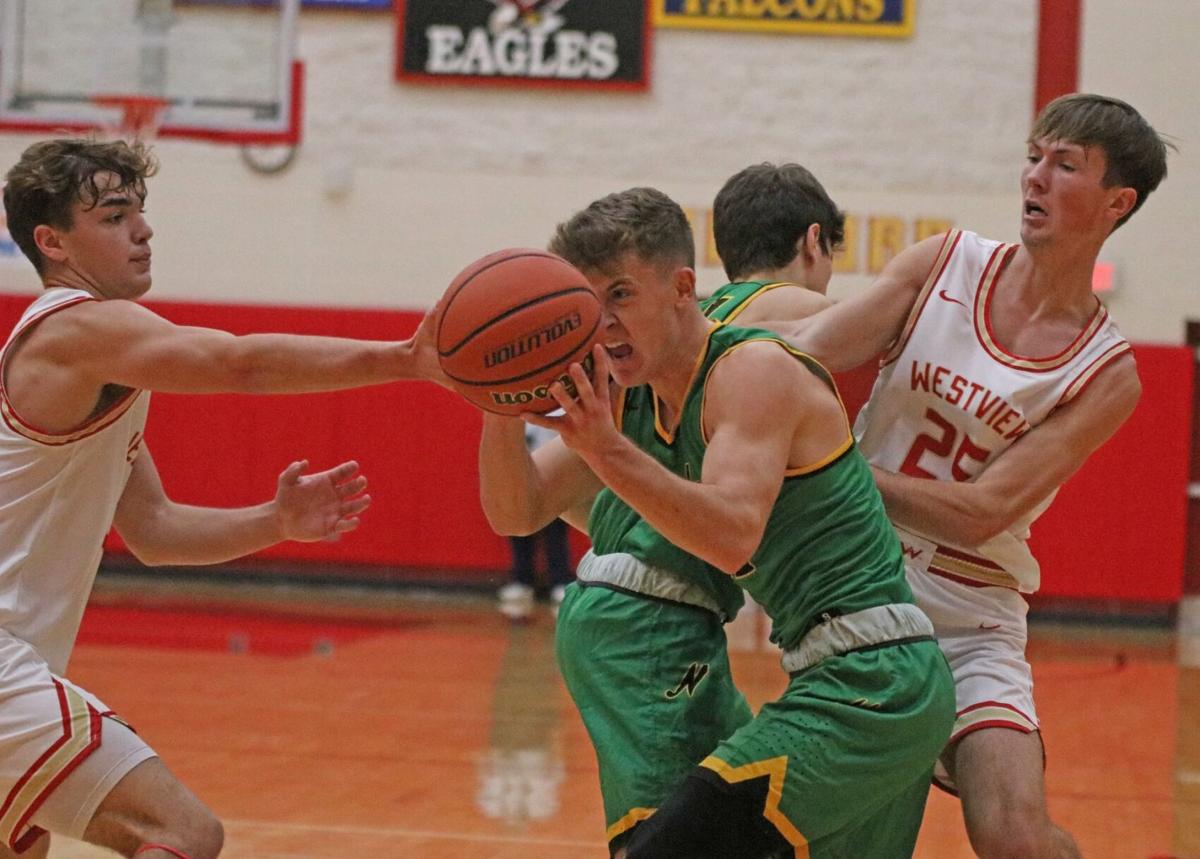 Northridge senior Carter Stoltzfus, middle, fights for the ball in between Westview seniors Drew Litwiller (25) and Luke Miller in the first half of Saturday’s game in Topeka. 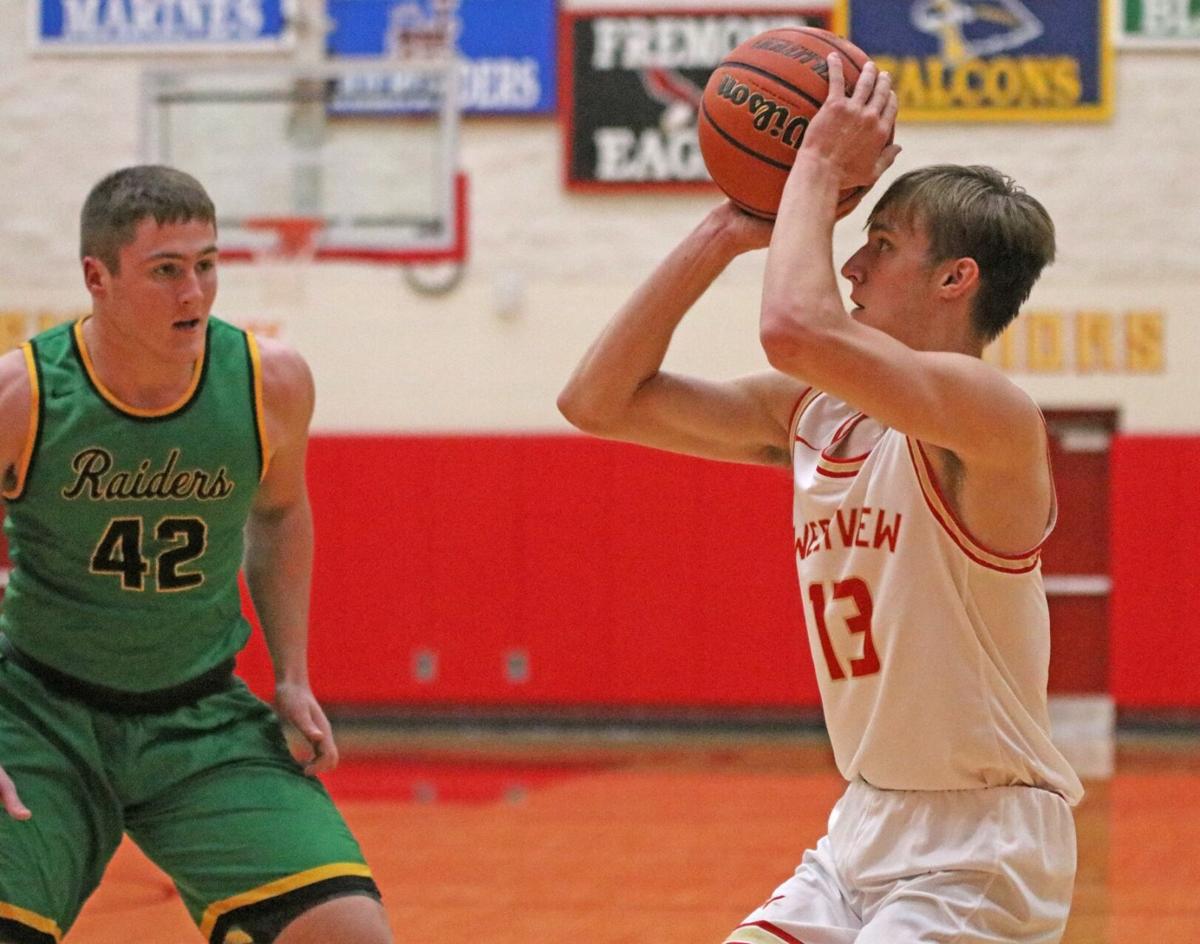 Westview junior Mason Yoder (13) takes a shot while Northridge senior Carter Bach (42) looks on in the first half of Saturday’s game in Topeka. 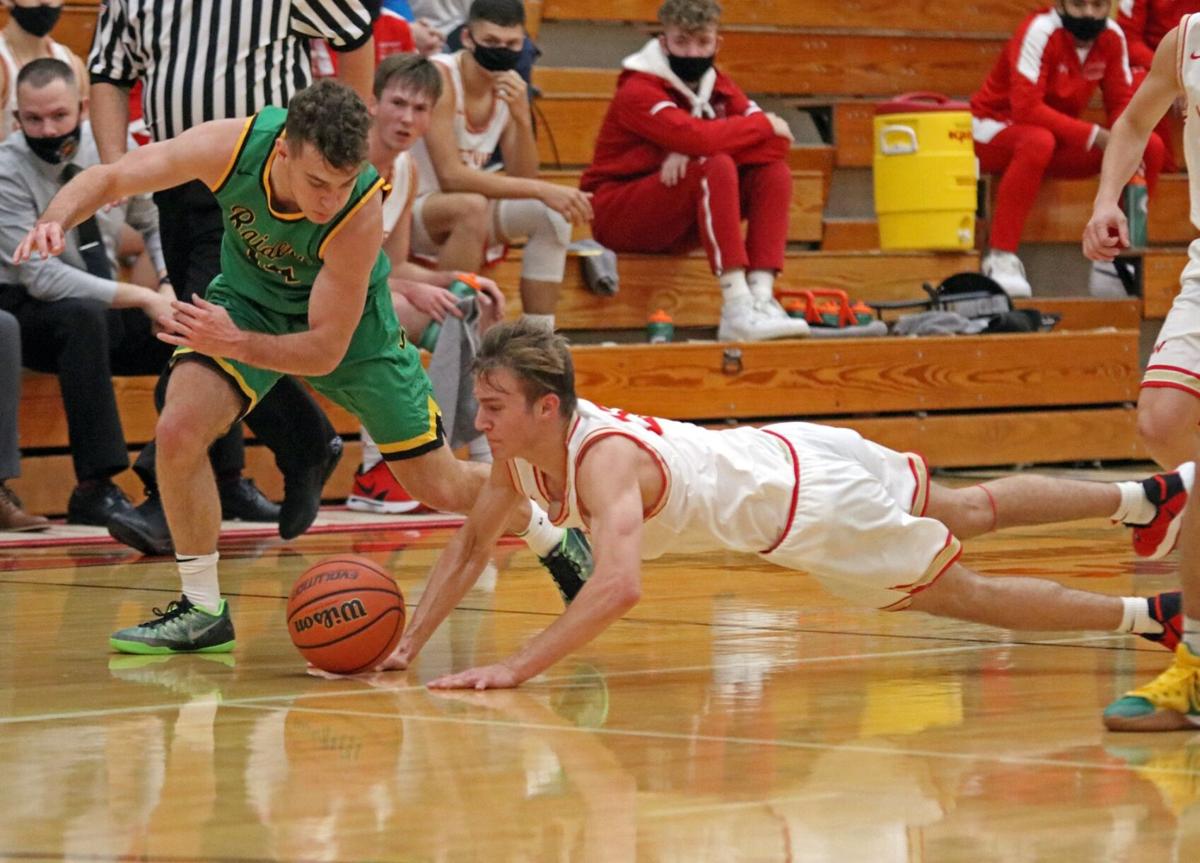 Westview junior Mason Yoder dives for the basketball while Northridge senior Clay Stoltzfus tries to reach for it as well in the second half of Saturday’s game in Topeka. 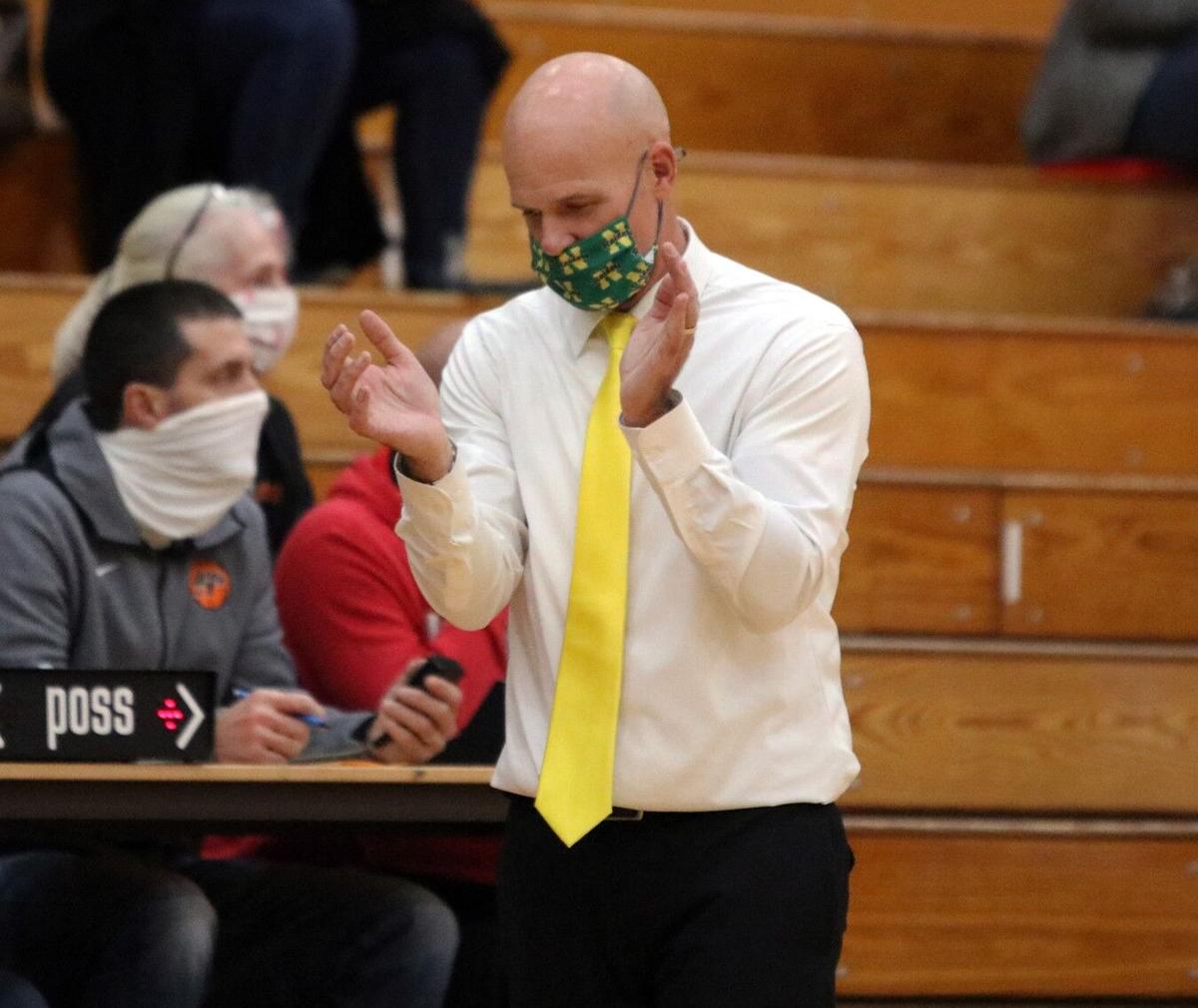 Northridge senior Sam Smith (30) drives past Westview senior Lyndon Miller in the second half of Northridge’s 66-59 victory over Westview Saturday in Topeka.

Northridge senior Carter Stoltzfus, middle, fights for the ball in between Westview seniors Drew Litwiller (25) and Luke Miller in the first half of Saturday’s game in Topeka.

Westview junior Mason Yoder (13) takes a shot while Northridge senior Carter Bach (42) looks on in the first half of Saturday’s game in Topeka.

Westview junior Mason Yoder dives for the basketball while Northridge senior Clay Stoltzfus tries to reach for it as well in the second half of Saturday’s game in Topeka.

TOPEKA — The Northridge boys basketball team picked up right where they left off from a season ago, shooting better than 60 percent from the field in a 66-59 victory over Westview Saturday on the road in Topeka.

Much like most of the 2019-20 season, the Raiders were led by guards Carter Stoltzfus, Clayton Stoltzfus and Sam Smith. All three are seniors this year, and they played like it against the Warriors. Carter led all scorers with 23 points, while Smith had 21 and Clayton had 11.

“Anytime you’ve got guard play, you feel comfortable,” Northridge coach Scott Radeker said. “I think we’re going to be able to score in a lot of different ways once we get rolling. … All of our guys really did a good job sharing the ball. We missed some good looks that we got out of our offense. Really excited for where we’re at right now.”

Replacing center Alex Stauffer is going to be Northridge’s biggest challenge this year. Junior Blake Jacobs played well in Stauffer’s old role, finishing with nine points. Jacobs had back-to-back made baskets late in the fourth quarter that put his team up 13, icing away the game for the Raiders.

“Blake plays hard,” Radeker said. “It’s really benefited him to play against Alex for two years, just battling him every single day in practice. So, it’s been a huge benefit for Blake from that standpoint. He’s one of our best talkers; he’s a leader out there on the floor. He encourages and works hard every single night.”

Northridge never trailed in Saturday’s contest, but Westview battled throughout. After trailing by 14 at halftime, the Warriors were able to cut the deficit to seven with less than a minute left in the third quarter.

“They missed some shots, first of all; that helps,” said Westview coach Ed Bentley of what helped Westview in the third quarter. “I thought we did a little better of staying in front of them (defensively).”

The Stoltzfus connection thwarted any momentum Westview had built up, though, as Carter found Clay for a ‘3’ as the third quarter buzzer sounded, giving the Raiders a 49-39 lead entering the final frame.

“I thought, defensively, we were pretty good, and then (Westview) made a little run and hit some shots against our zone (defense),” Radeker said. “That ‘3’ to get it back to 10 was huge for us. It kind of did give us our momentum back as we headed into the fourth.”

For Westview (1-1), junior Mason Yoder led the way offensively with 21 points. Senior Drew Litwiller had 19 points, sophomore Brady Yoder chipped in 15 and senior Luke Miller had four. Bentley knows it’s going to be a learning experience for his younger roster early in the season. They don’t play again until Friday at Churubusco.

“We’re playing a lot of guys in different roles who’ve been here the last four years and are now in, what I would call ‘primetime’ roles where they have to handle the ball more and make these plays where it’s not just playing off of somebody,” Bentley said. “I think that’s going to take an adjustment for these guys when we play these better teams. That’s something you can’t really simulate in practice. We’re going to use this as a learning experience and move on.”

Northridge (1-0) next plays this Saturday at home against Elkhart. The Raiders were one of 64 programs in the state to end with a win last year, as the IHSAA boys basketball tournament was canceled at the regional round due to the COVID-19 pandemic. Radeker acknowledged that the way last season ended is motivating his team this season.

“We had no control over that; we much would’ve rather have played in the regional and lost, to be honest,” Radeker said. “Obviously, we wanted to win the regional, but we would’ve rather played. Now, it’s a 17-game winning streak. There are 64 teams that got to go into this year on a winning streak, and that’s what we’ve got to try to do. We’ve got to try to make a positive out of a negative. Now our guys are taking in pride in continuing to win and building off what we did last year.”

UHRICHSVILLE [mdash] A 1969 graduate of Goshen HS, she is survived locally by siblings, Genevive (Jesse) Kehr and Daniel Miller. Her funeral was Jan. 18 in Dennison, Ohio. A full obituary is available at www.lindseyfh.com. Arrangements by R.K. Lindsey F.H. 740-922-1970