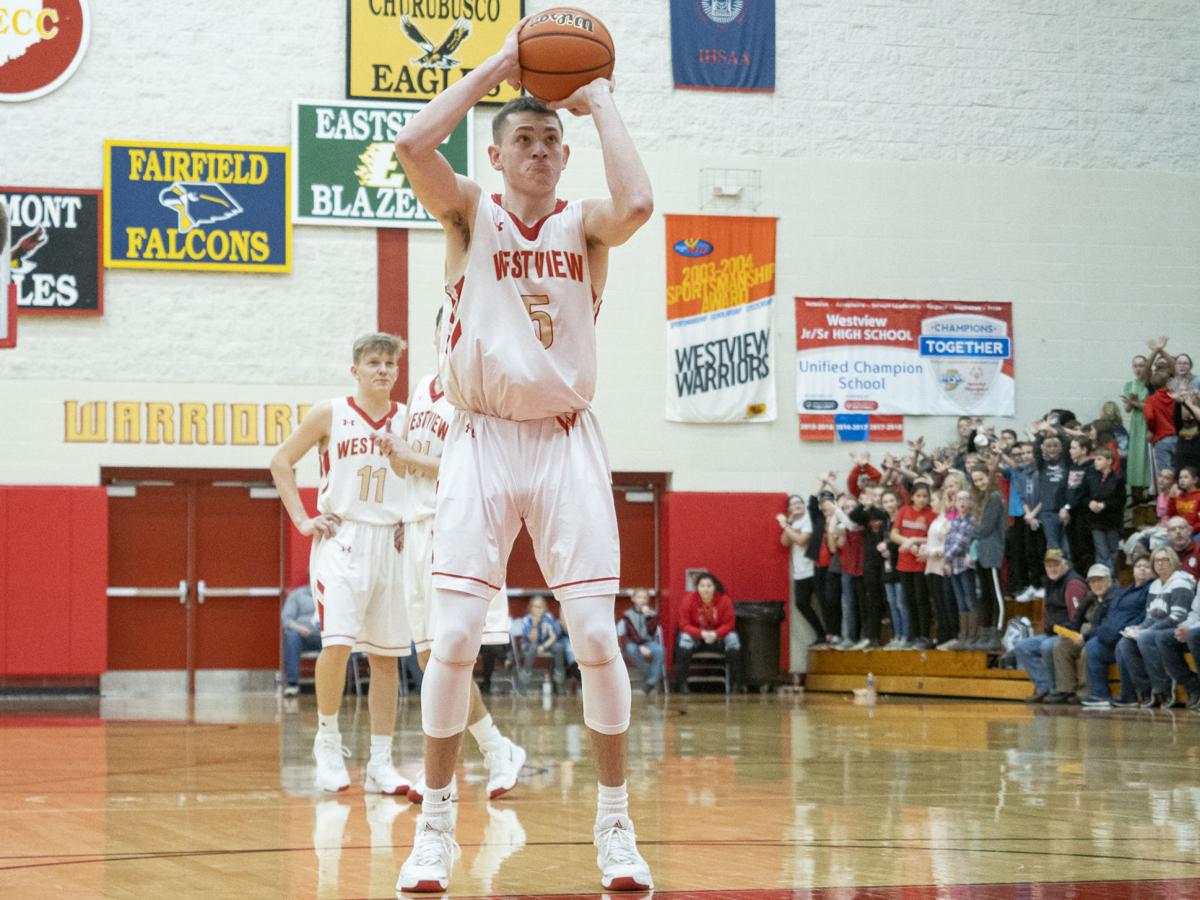 Westview Warriors senior Charlie Yoder (5) shoots a free throw Friday to break the previous Westview boys basketball record of 1,711 points during the game between the Hamilton Marines and the Westview Warriors. The previous record was set in 1973 by Gary Yoder. 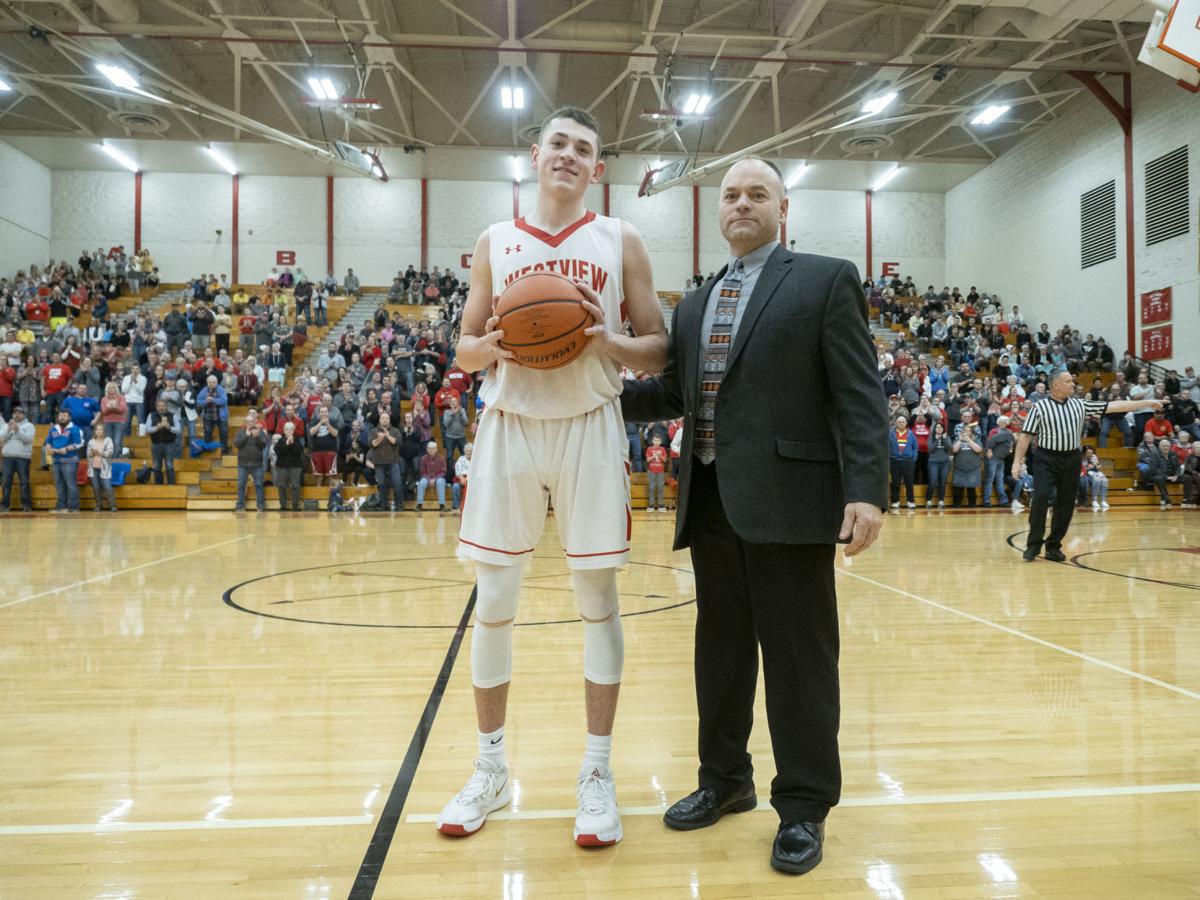 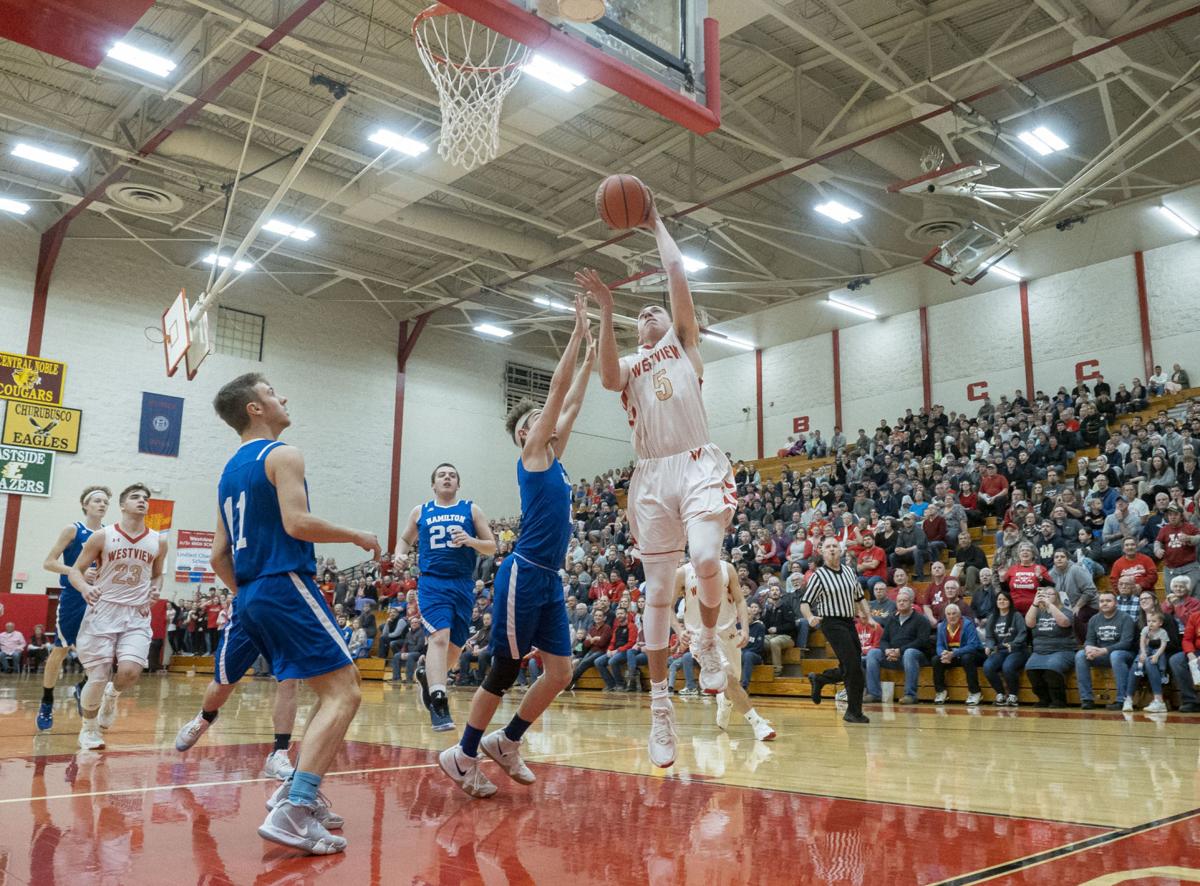 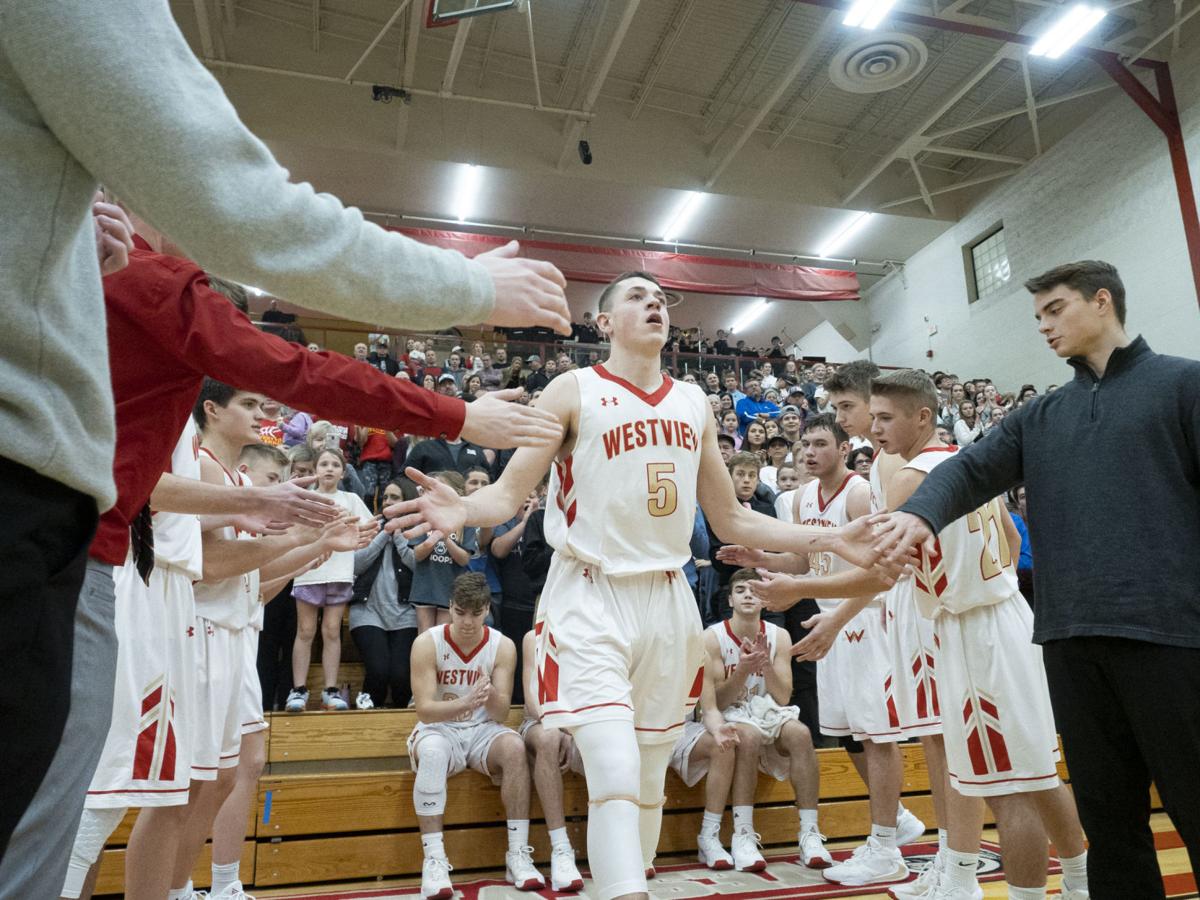 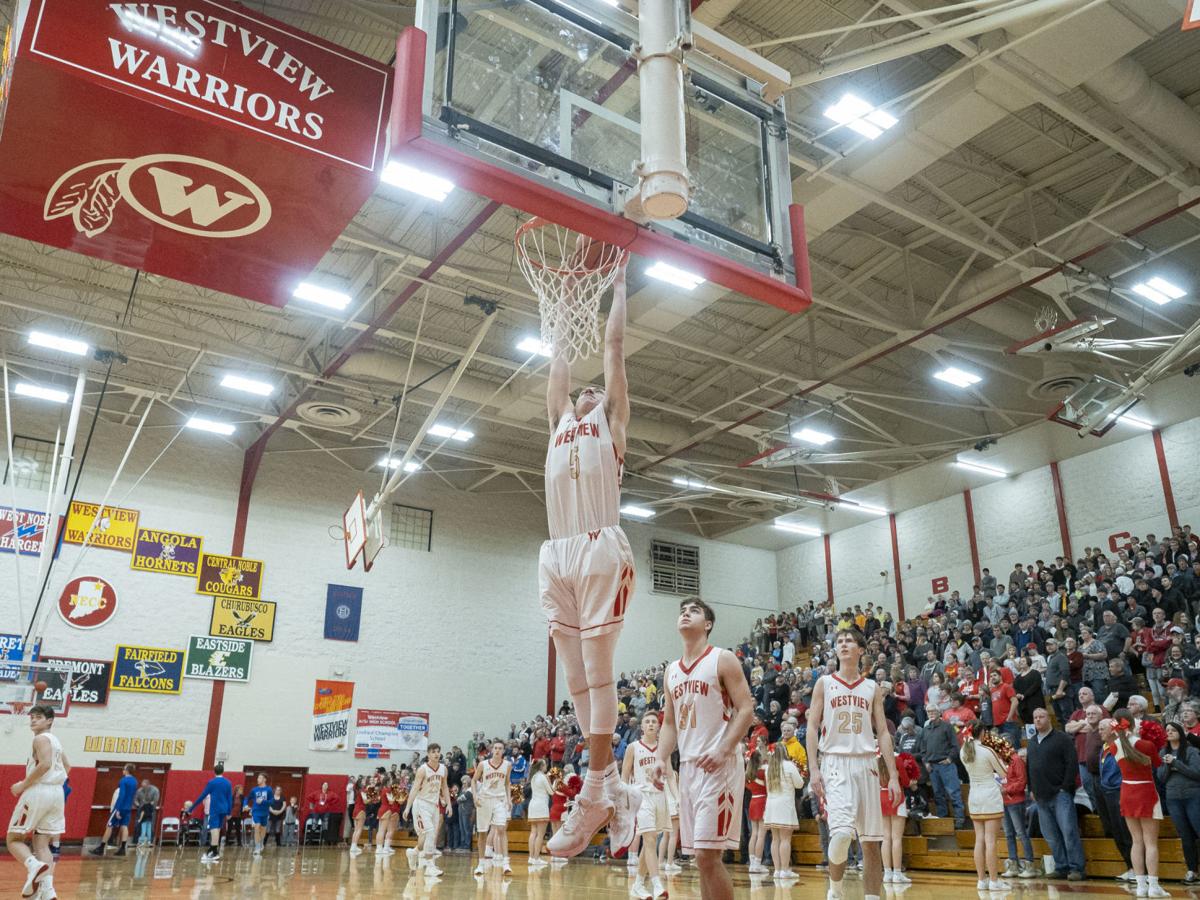 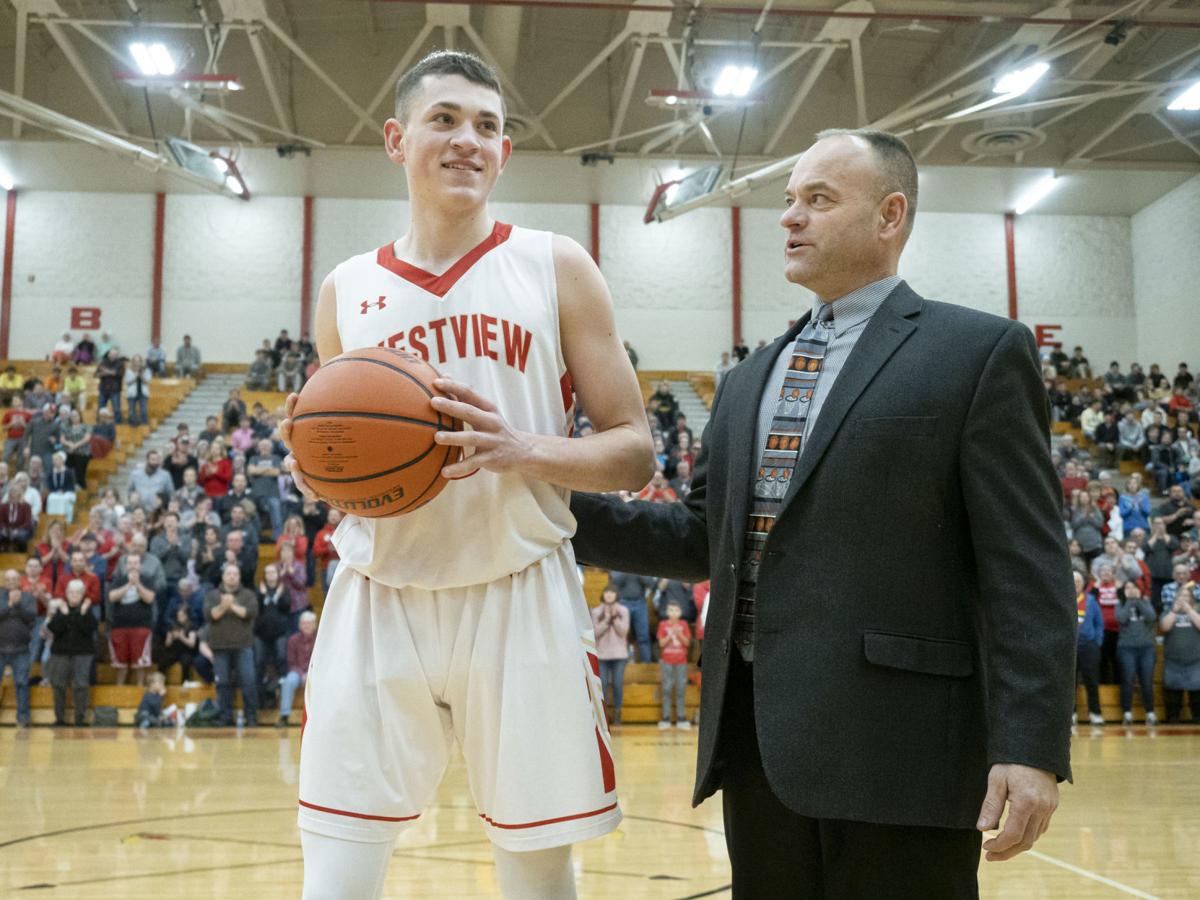 Westview Warriors senior Charlie Yoder (5) shoots a free throw Friday to break the previous Westview boys basketball record of 1,711 points during the game between the Hamilton Marines and the Westview Warriors. The previous record was set in 1973 by Gary Yoder.

TOPEKA — For 17,114 days, Gary Yoder has held the record for most points scored by a Westview Warrior boys basketball player in their career.

“It’s crazy,” Charlie said. “To break a record that old. (Gary) was such a great player. It’s incredible to be in the conversation of the great players in the history of this school.”

“I think it’s a little bit surreal because, honestly, I never thought I’d see anybody break Gary’s record,” Westview coach, and Charlie’s dad, Rob Yoder added. “I just never thought I would, and so when it happened, and it’s one of our players and it’s my son — that’s pretty special.”

Charlie drove the ball to the lane after a steal and was fouled. Needing just one point to break the record, the left-handed senior took a dribble, shot and drained the free throw. He missed the second free throw, but the ball went out of bounds. This allowed the officials to stop the game to allow Charlie to be presented with a game ball from Rob.

Charlie finished the game with 28 points, bringing his career total to 1,739.

As for Gary, he’s OK with his record finally being broken.

“Well, after almost 50 years, it isn’t something to be sad about,” Gary said. “I’m more delighted that Charlie has the opportunity to do it and that he’s worked so hard to get in this position to do it. I’m delighted for him.”

Gary and Charlie actually re-connected back in October when Gary was in town visiting. The two are technically related, but Rob said “you’re going to get really confused” as he explained how they are.

“Gary would be a brother in-law to my aunt, who is my dad’s sister,” Rob said. “Just remember a Yoder married a Yoder.”

The 64-year-old Gary took in a preseason workout.

“He’s just a fine young man and he’s worked extremely hard to get where he is today,” Gary said of Charlie. “I’m very proud of him, his dad — coach Rob, who I know very well, I talked to him as well — has done a great job. His teammates have been very supportive.”

“I’ve always looked up to him,” Charlie added. “It was just good to see him again. I hadn’t seen him for a while. He’s a nice guy, very humble.”

THE PLAYER WHOSE RECORD IS BROKEN

When Shipshewana, Topeka and Scott High Schools combined to form Westview Jr.-Sr. High School in 1966, the students, teachers and staff of the new school were looking for their first basketball star.

They had to wait six years, but the school eventually had one in Gary Yoder.

The 683 points in a single season was a program record until last year, when Charlie scored 734.

“Coach Denny Foster came to our school at that time and was the key in unlocking our potential as players,” Gary said. “My teammates were terrific because they sacrificed a lot of their offensive game to elevate our efficiency as a team. I played inside as a center at 6-4, and I could score pretty well around the basket and such. (My teammates) were very unselfish and that was very helpful.” 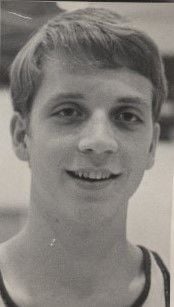 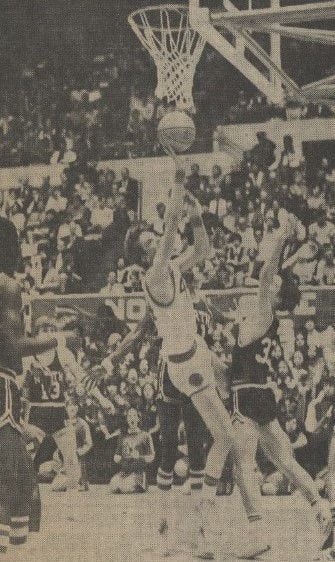 Gary Yoder puts up a shot in the regional semifinal against Fort Wayne North Side at The Coliseum in Fort Wayne in this March 2, 1973 file photo. Yoder was the Westview boys basketball all-time leading scorer for 47 years until Charlie Yoder broke his record Friday against Hamilton. 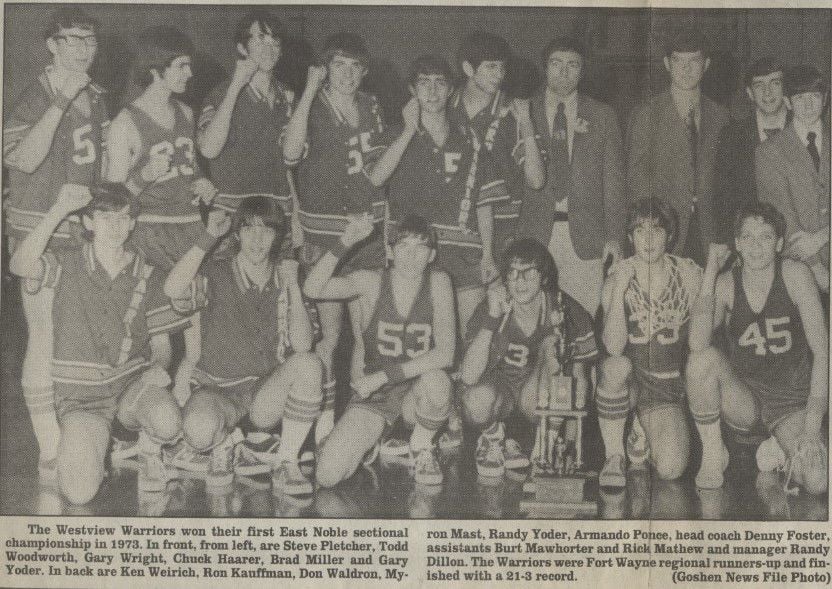 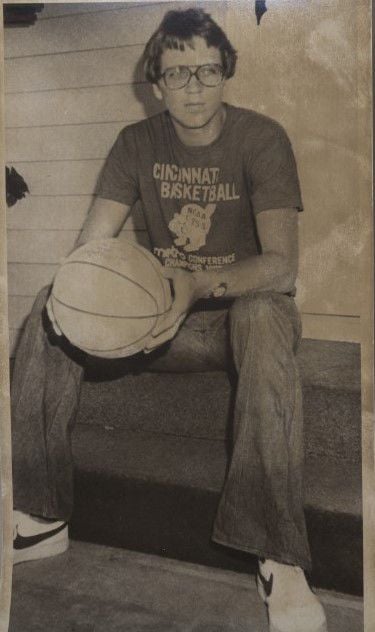 Gary Yoder sporting a Cincinnati basketball shirt in this unmarked file photo. Yoder played for the Bearcats in the 1975-76 and 76-77 seasons.

Gary Yoder puts up a shot in the regional semifinal against Fort Wayne North Side at The Coliseum in Fort Wayne in this March 2, 1973 file photo. Yoder was the Westview boys basketball all-time leading scorer for 47 years until Charlie Yoder broke his record Friday against Hamilton.

Gary Yoder sporting a Cincinnati basketball shirt in this unmarked file photo. Yoder played for the Bearcats in the 1975-76 and 76-77 seasons.

The sectional-winning team of 1972-73 is often cited as the birth of what Westview basketball has become today.

“I grew up thinking Gary was almost bigger than life,” said Rob, who grew up cheering for Westview. “I kind of still feel that way. I think a lot of people would say he’s almost a legend around here. The things he did and the things he accomplished and how long the records he held stood.”

Gary credited his family for not just supporting him, but also helping him develop into one of the area’s top basketball stars.

“Richard, my older brother — he’s eight years older — was very instrumental in helping me develop my basketball fundamentals,” Gary said. “He and I had an eight-year age difference, but he and I would play a lot of 1-on-1 and such.”

After high school, Gary went to Ole Miss. He played there for one season before transferring to Southern Idaho Community College. After a year in Idaho, Gary transferred back to a Division-I program at Cincinnati. While there, Gary helped the Bearcats to back-to-back NCAA Tournament appearances in 1976 and 1977. He was named the Metro Seven Conference Player of the Year his senior season.

Gary was drafted in the third round of the 1977 NBA Draft by the Milwaukee Bucks, but never played in the league.

Since 1981, Gary has worked at Morgan Stanley Wealth Management. He’s moved up to a senior vice president position over the near-four-decade career. Gary lives in San Luis Obispo, Calif., and runs his office out of Fresno, Calif. He and his wife, Carroll, have four kids, Megan, Katelyn, Brian and Angela, and three grandchildren.

Carroll is from Fort Wayne, so the couple comes back to the area from time-to-time to visit their family. Even living three time zones away, Gary still follows the Warriors.

“I think (the program) values teamwork, playing hard, playing smart — I think that was our motto: play hard, play together, play smart,” Gary said. “That’s been the motto.”

Like Gary did in 1973, Charlie faces a major college decision. Charlie said he’s received approximately 15 to 16 scholarship offers to play collegiately and won’t make a decision until after the season. Gary stressed that Charlie focus on more than basketball when making his decision.

“It’s really about getting a good education at a good school that you feel good about and looking at it as a stepping stone to the next 30 years or 40 years, in terms of what you want to do,” Gary said. “It is basketball, but it’s more than basketball.”

Charlie was able to break the record Friday on his homecourt, somewhere he’s dreamed of playing since his childhood.

“We have a great fan base, and so for me to be able to do just whatever I can for the town and our fan support — and for us, as a team, just to give them an enjoyable game to watch — it means a lot,” Charlie said. “We’re just trying to do whatever we can for the town of Shipshewana and for this school.”