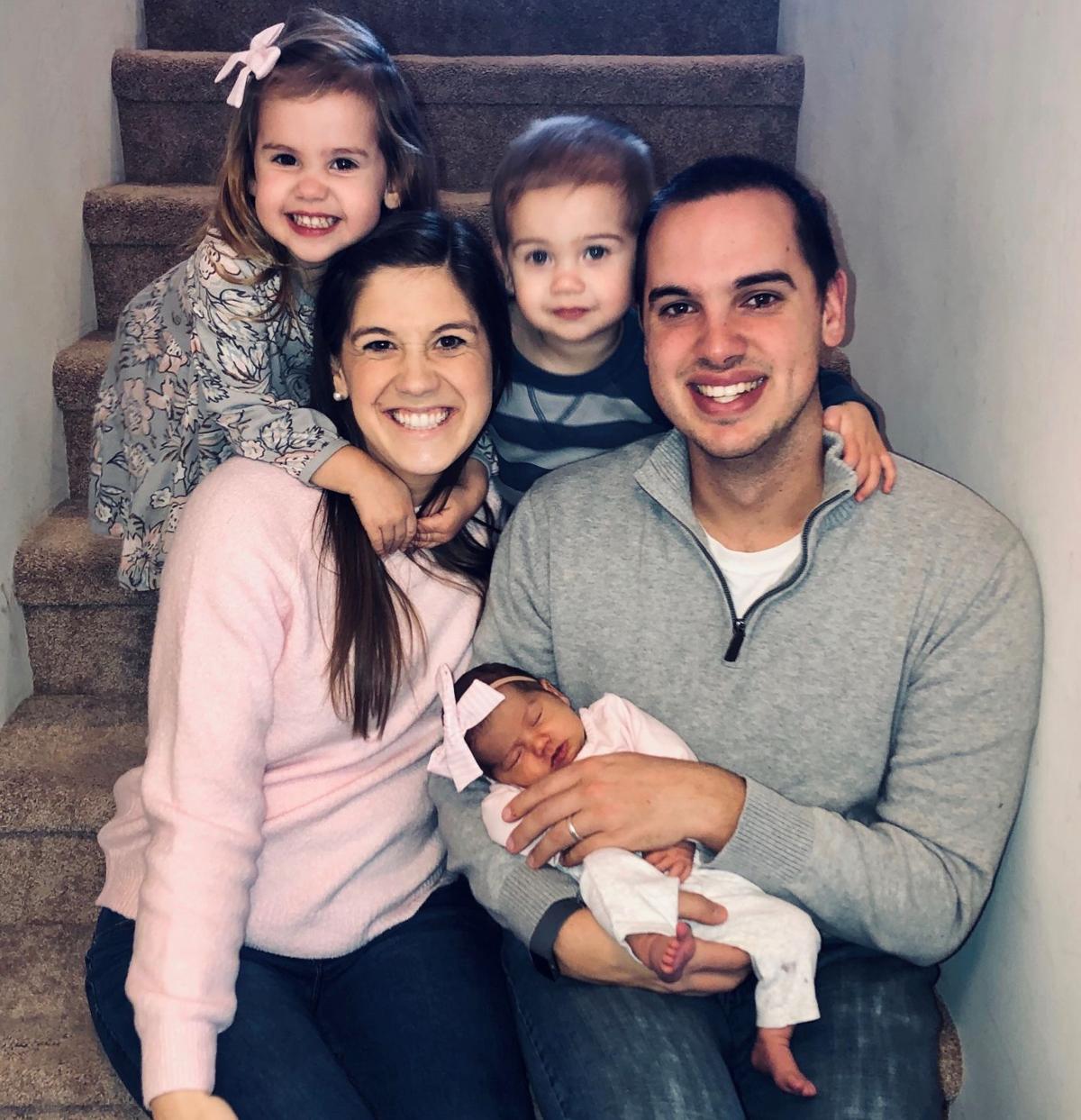 Goshen baseball coach JJ DuBois, seated right, holds his newborn daughter, Ellie, while taking a family picture. Seated next to JJ is his wife, Holly. Sitting above JJ and Holly, from left to right, are their daughter, Hope, 3, and son Owen, 1. 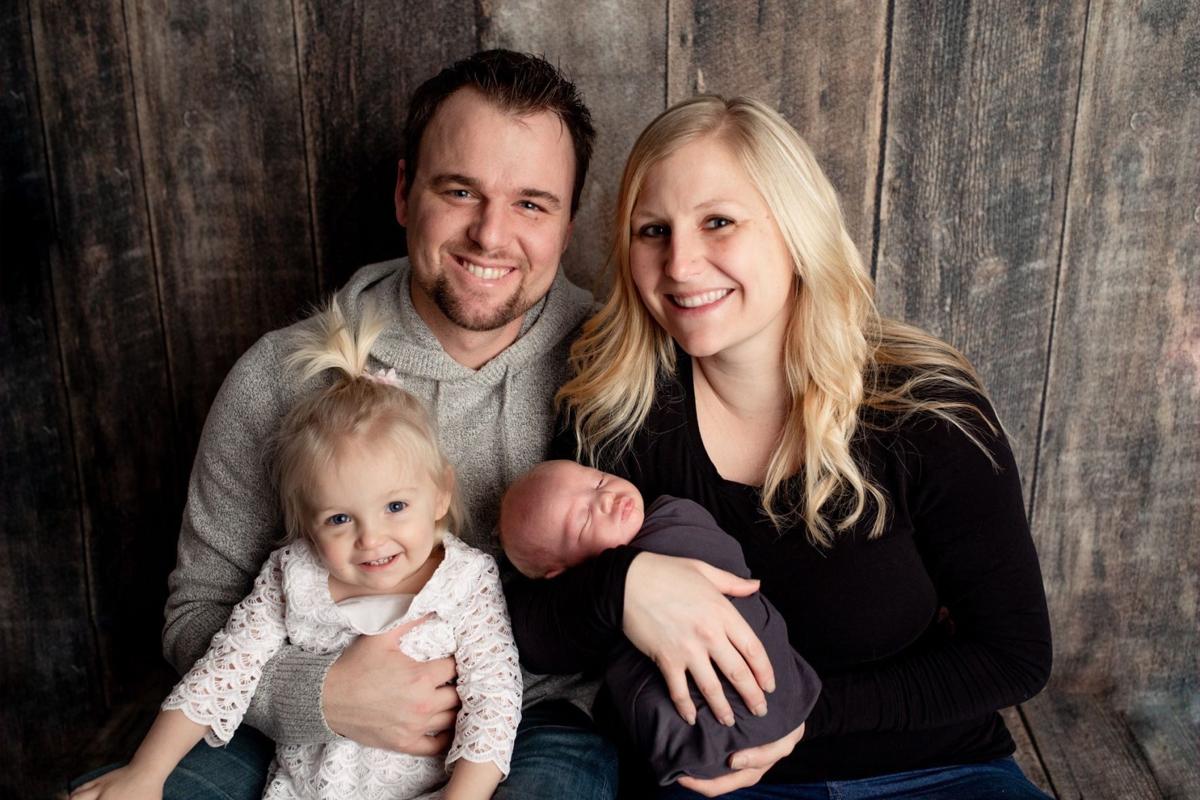 Fairfield baseball coach Darin Kauffman, seated right, holds his daughter, Charlee, 2. Seated next to him is his wife, Lindsay. In Lindsay’s arms is their newborn son, Rizzo.

Goshen baseball coach JJ DuBois, seated right, holds his newborn daughter, Ellie, while taking a family picture. Seated next to JJ is his wife, Holly. Sitting above JJ and Holly, from left to right, are their daughter, Hope, 3, and son Owen, 1.

Fairfield baseball coach Darin Kauffman, seated right, holds his daughter, Charlee, 2. Seated next to him is his wife, Lindsay. In Lindsay’s arms is their newborn son, Rizzo.

Ten days from now, JJ DuBois and Darin Kauffman were expected to be trading lineup cards with each other as the high school baseball season was to begin. JJ would be starting his second season leading Goshen, while Darin was set to start season number three at Fairfield.

Now, the only way the two will be able to see each other on March 30 is if they set up a play date for their kids.

Concerns over the coronavirus have led Indiana Governor Eric Holcomb to cancel school through May 1, meaning spring sports are put on hold as well.

This allows the dads to be home with their newborn children, though, which provides mixed reactions for their respective wives.

“We’re definitely not upset about it, but we’re disappointed that we’re not getting to do our normal spring stuff,” Holly DuBois said. “We’re loving extra daddy time.”

“As sad I know Darin is that he can’t coach his season, I really enjoy having him home, and I know Charlee has, too,” Lindsay Kauffman added. “I’m enjoying it.”

The Kauffmans have two kids: their daughter Charlee, who turns two on April 4, and Rizzo, who was born on Jan. 15. Their son was named after Anthony Rizzo, the first baseman for the Chicago Cubs. With no sports being on currently, the Kauffmans made sure to watch an old baseball game on Wednesday to honor the name of their new son.

“We watched the Cubs World Series game from 2016 — we have it on DVD,” Lindsay said. “We’re just trying to make the best of it. I think it was funny having the game on (Wednesday); it just felt a little bit more normal. Charlee kept calling it ‘football’ even though it was baseball.”

This is kid number three for JJ and Holly. They have a daughter, Hope, 3, a son, Owen, 1, and a new daughter, Ellie, who was born on Feb. 21. For the DuBois family, a joke they made in the week after Ellie’s birth has now become their new reality.

“We joked all week, ‘Can we just be a stay-at-home family?’ And now we’re kind of getting that,” Holly said. “We laughed at, ‘Well, our wishes came true for a little bit.’ Just soaking up all the family time.”

Darin couldn’t help but make a basketball reference when talking about taking care of his two kids with his wife.

“We’re both home and we can take the one-on-one approach, where one takes one (kid) and one takes the other,” Darin said. “Little one-on-one before we have to go back to zone (defense); we can go man-to-man right now in basketball terms.”

For JJ, he knows what his top priority is at home with his children.

“I’ve been just focused on keeping the house clean because with two mobile kids, they just terrorize the house,” JJ said. “I’ll pick up after them while my wife entertains.”

Holly is a part-time teacher at West Goshen Elementary School, so her maternity leave was going to let her be home with Ellie and her children the rest of the school year. Lindsay is also a teacher, teaching sixth grade at Benton Elementary School. The Kauffmans were going to need to use a babysitter eventually, but don’t have to now with school canceled.

While both baseball coaches expressed frustration at the delaying of their seasons, both are happy to be spending quality time with their families.

“It’s weird to not have a season right now and be without the players, but it’s like, ‘Well, now I’m able to spend time with my kids and my wife and being home,’” Darin said.

“I’m having a pretty difficult time dealing with this whole thing, but it is nice to have a family and have my kids and all of that,” JJ added. “If I didn’t have them here, I’d be in a really bad place because I’d have nothing to do. They keep me busy.”