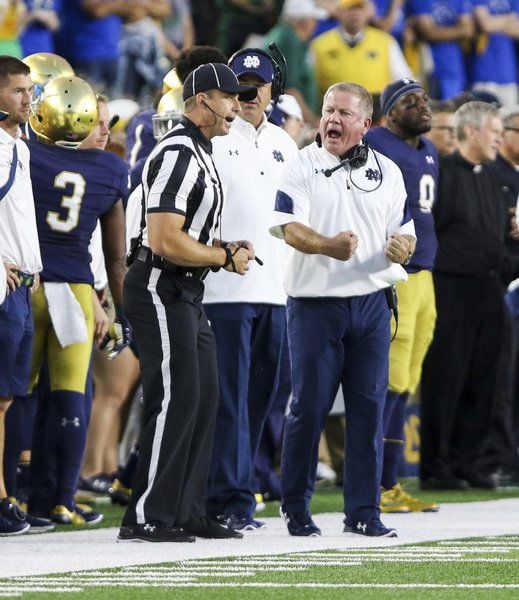 CHAD WEAVER | THE GOSHEN NEWSNotre Dame head coach Brian Kelly yells at an official during the first quarter of the Sept. 17 game against Michigan State at Notre Dame Stadium. 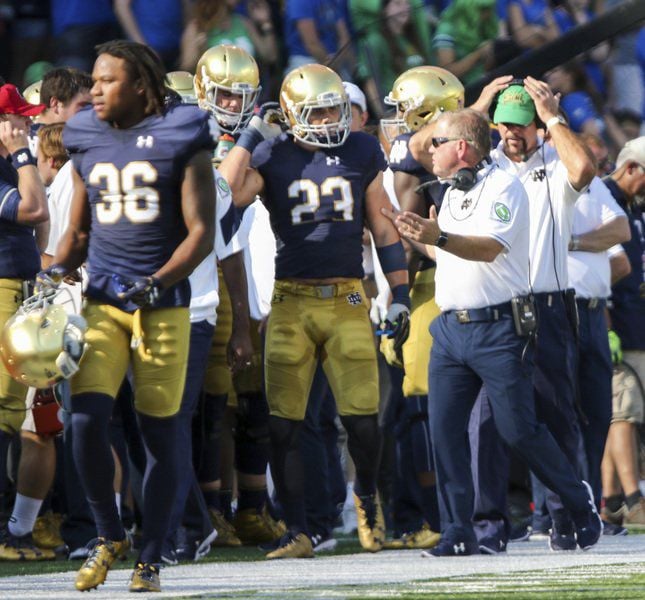 CHAD WEAVER | THE GOSHEN NEWSNotre Dame head coach Brian Kelly yells at an official during the first quarter of the Sept. 17 game against Michigan State at Notre Dame Stadium.

SOUTH BEND — He doesn't believe his players have given up, so Notre Dame head coach Brian Kelly isn't throwing in the towel on 2016, either.

At 2-4 following the 10-3 loss to North Carolina State Saturday, the temptation to approach the final six games with full attention toward grooming young players for next season is understandable. But Kelly said Tuesday he doesn't believe it's necessary to sacrifice today in the name of a more promising tomorrow.

“So I'm in the present and we're coaching to win right now, but everything that we do is to return us back to the top. And we want to stop the slide, and that means start winning again. And so everything we're doing right now is to stop right now losing games and (start) winning games and keep building on that for the future.”

Halfway through the schedule, the outlook has changed significantly since the Fighting Irish began the season ranked 10th with College Football Playoff dreams. Now they're going to have to pull off a few upsets to salvage the season by earning a bowl berth.

Clawing its way to six wins and a low-level bowl is the last big carrot left for Notre Dame to chase. In the meantime, the focus turns to incremental development in a micro sense.

“We're doing some good things on offense. I like our personnel. I like what we're doing,” Kelly said during his Sunday teleconference. “But we just lack that ability right now, that maturity, that toughness, that thing that you can't put your finger on, that 'it.' We've got to have that late in the games. And we haven't had that yet, and we have to develop that on offense.

“So developing that on offense, continue to grow on defense, those are the immediate goals.”

Kelly-coached teams have finished with a losing record just once in his career, the 2004 Central Michigan Chippewas who finished 4-7 in Kelly's first year on the job. Two more losses this year would make it his worst season at the helm in South Bend.

Kelly's run at Notre Dame has been relatively boom-or-bust, with two 10-win seasons to go along with four eight- or nine-win campaigns. By that metric, this year has already marked its place firmly in the disappointment column.

As a portion of the fan base grows increasingly weary with Notre Dame's cyclical program under Kelly, the coach said he does his best to avoid talk about his job being in jeopardy.

“So yeah, 2-4 is unacceptable. It's not where we want to be. But I'm looking for guys that want to be a solution and not worry about what other people think or say.”

Kelly used the phrase “game-wrecker” on a weekly basis in 2015 to describe the upcoming opponent's best player. While Kelly hasn't used the term yet this season, he did bestow it upon dynamic Stanford running back Christian McCaffrey before last year's tilt.

The much-maligned Irish defense may be in for a break, as McCaffrey as dinged up in the Cardinal's loss to Washington State last week. A decision on McCaffrey's availability for this weekend won't be made until Friday or Saturday, Stanford head coach David Shaw said, per Jon Wilner of Bay Area News Group.

Since taking the silver medal in his battle with redshirt sophomore DeShone Kizer for the starting quarterback job, redshirt junior Malik Zaire has virtually faded into anonymity.

Zaire made a brief appearance in Week 4 against Duke, taking a handoff to begin the game and botching a gadget play later on. Kelly was angry with the execution after the loss, and Zaire hasn't been seen since.

Kelly would like to create a role for Zaire to thrive and remain involved with the offense, but doing so has proved too cumbersome so far.

After former defensive coordinator Brian VanGorder was shown the door and before the Irish took on Syracuse in Week 5, Kelly answered a question about his oft-criticized fiery sideline demeanor by saying he thought, if anything, he should ratchet up the energy and emotion.

The subject was raised again Tuesday after Kelly was seeing giving center Sam Mustipher a verbal lashing on the sideline at N.C. State.

“I've got a great relationship with my players,” he said. “I'm just coaching; I'm being Brian Kelly. If people have a problem with that, then they're not going to be friends or fans of Notre Dame football — and I can't help that. I don't feel like I'm crossing a line. I think I'm being who I am; I'm being direct. I'm handling the situation as it, you know, hits me. I'm just going to be who I am. And if I feel like there's a matter that needs to be attended to, I need to handle it right away.”