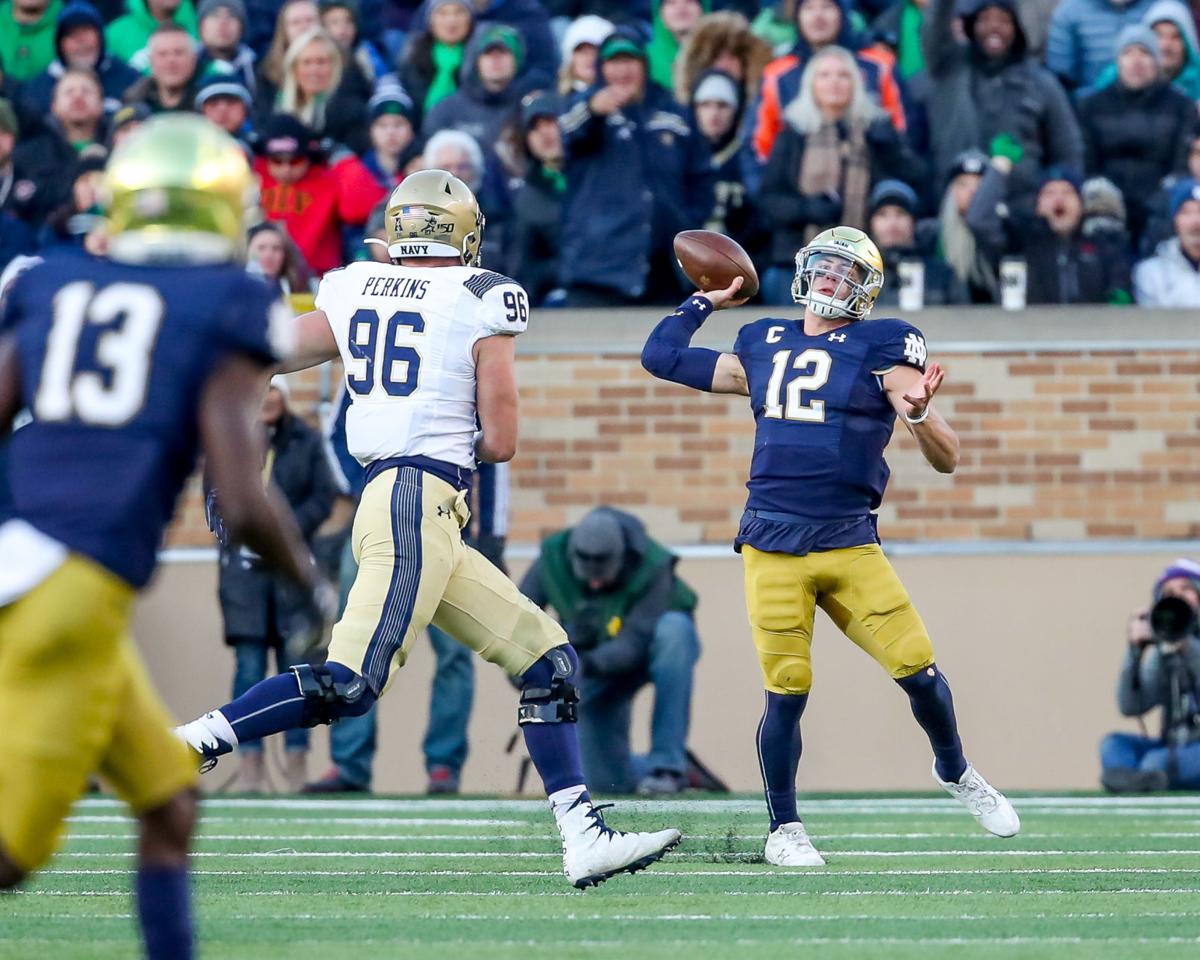 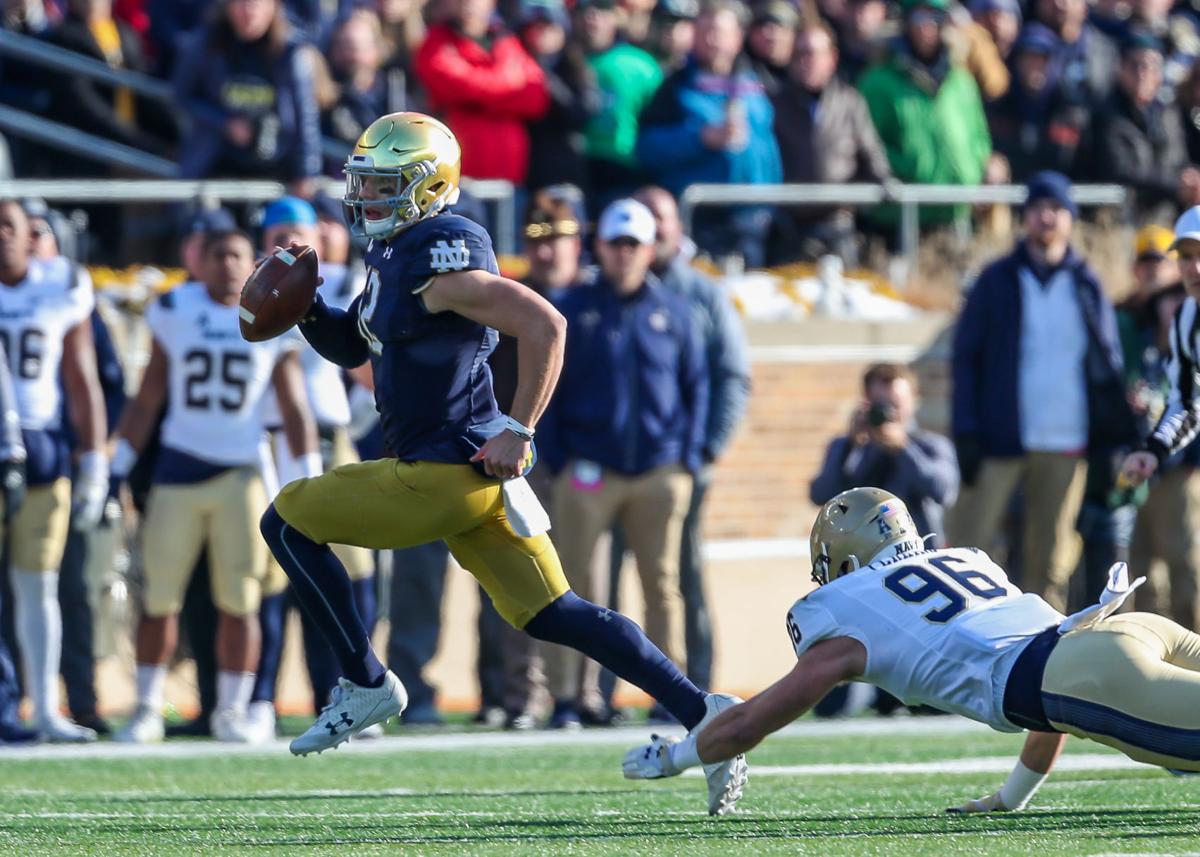 Notre Dame quarterback Ian Book, 12, scrambles for a first down in the first half of Notre Dame’s 52-20 victory over Navy Saturday at Notre Dame Stadium in South Bend.

Notre Dame quarterback Ian Book, 12, scrambles for a first down in the first half of Notre Dame’s 52-20 victory over Navy Saturday at Notre Dame Stadium in South Bend.

SOUTH BEND — There may not have been one play that illustrated Ian Book had his mojo back more than the throw he made to Lawrence Keys in the third quarter Saturday against Navy.

On a third-and-seven from the Notre Dame 25-yard line, Book took a shotgun snap and immediately felt pressure. The redshirt junior scrambled out to his left to buy some time. Still facing some heat, Book twisted his body and fired a strike down the sideline to Keys. The redshirt freshman hauled in the pass, keeping both of his feet inbounds for the 27-yard reception.

“Probably should have thrown it to somebody else if we’re going to be honest, just because of the look we had,” Book said after the game. “It was really one of the plays I wanted back. Was able just to extend the play. I knew I wanted to go to my left with all the receivers already over on that side. Saw Keys coming to the sideline.”

It was this play that reminded people of what they thought Book would be for all of 2019. After an up-and-down first seven games, it appears Book has found his swagger again.

The change in Book’s game appeared to have come on the final two drives against Virginia Tech on Nov. 2. The first of those two drives saw the Irish drive from their own three-yard line all the way to the Hokies’ four-yard line. A 15-yard penalty — followed by a missed field goal — kept points off the board for Notre Dame, though.

Book didn’t waver, however, getting the ball again and driving 87 yards on 18 plays, capping it off with a seven-yard touchdown run to win the game for the Irish. After having a career-worst performance the prior week against Michigan, Book was able to lead Notre Dame to victory.

The comeback win has served as a launching pad for the quarterback. In the next week’s game against Duke, Book threw for 181 yards, rushed for 139 and finished with four passing touchdowns. It was one of his most complete games in the blue and gold.

Book carried that momentum into the Navy game. He finished 14-of-20 passing for 284 yards and five touchdowns. He also used his feet effectively, rushing for 31 yards on five carries.

Irish coach Brian Kelly said there were some changes made in practice following the Michigan game, and its paid dividends for Book.

“We’re not scripting as much (in practice) in terms of just calling it off the script and running it from a particular area in the field,” Kelly said. “We’re on the sidelines and we’re running plays much more like a scrimmage. So, Ian is getting plays from the sideline and getting it in much more of a game-like fashion instead of just standing there and getting it off a script and almost it being formulated for him.”

This has allowed Book to simulate what Saturday feels like throughout the week instead of going into the game cold turkey.

“We wanted it to be one where (Book) had to see it, digest it, and then we would coach it after the fact in film study,” Kelly said. “Because it seemed to me that we looked great in practice because he already had the answers to the test. … He had to show us the work by going through all the progressions before he saw it. He did not know what the play was. I think that’s really helped him decipher what’s going on and what he’s seeing out there.”

There was a lot of chatter about benching Book after his performance against Michigan, but Kelly said Book has done a good job of blocking most of it out.

“Some of it is going to seep through, naturally, because of the nature of the position at Notre Dame,” Kelly said. “You don’t come to the Notre Dame as the quarterback expecting to have to wear earplugs. You’re going to hear it, and you have to be able to deal with it. I think he’s figured out how to do that.”

Coming into 2019, there was some thought as if Book might declare for the 2020 NFL Draft if he had another strong season. After how his year began, though, those discussions have tampered off.

This leaves Book and Notre Dame in a predicament. Although he’s an academic senior, Book is still eligible to come back for another season since he redshirted his true freshman year. Kelly wouldn’t comment in-depth on whether or not Book will be returning or not for the 2020 season.

“I’ve talked to a lot of the guys. Not going to get into the specifics. Those are conversations that we try to have with guys that have eligibility remaining,” Kelly said. “Lots of those conversations are percolating. They’re not priorities right now, but we like to lay the groundwork right now.”