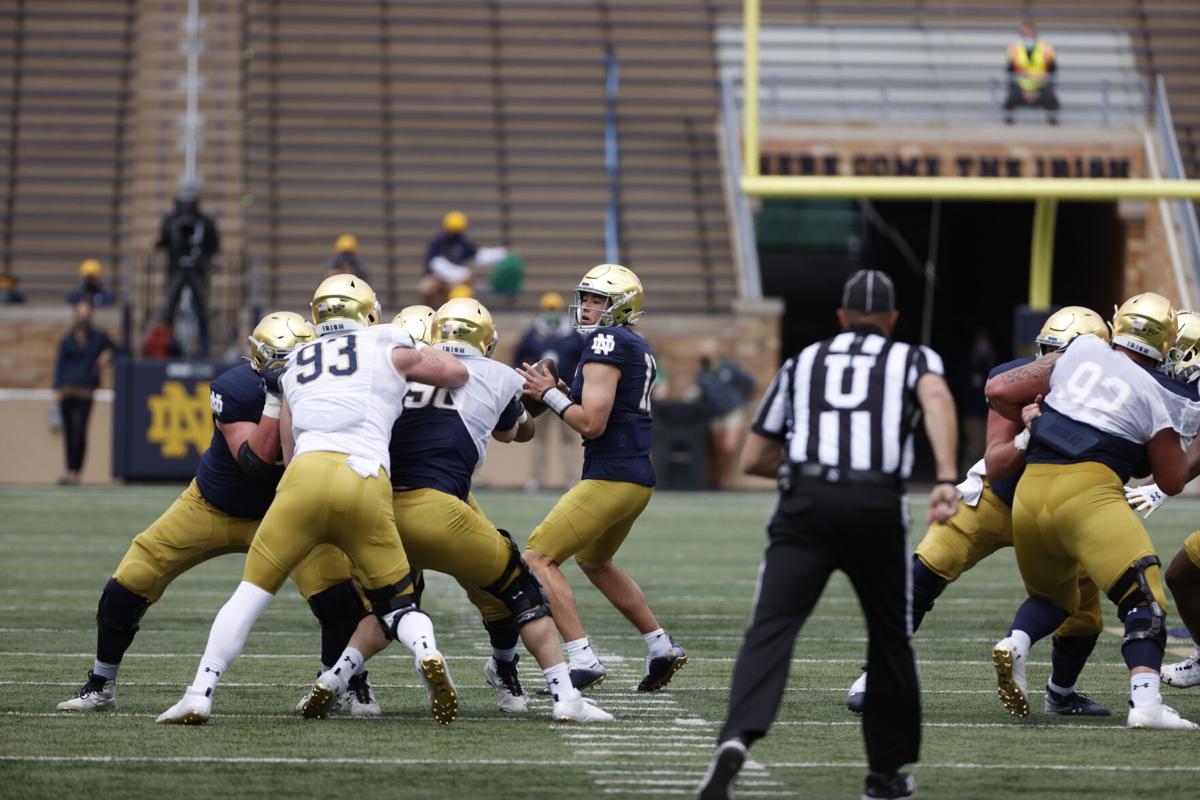 Notre Dame quarterback Tyler Buchner looks down field during the second half of Saturday’s Blue-Gold Game at Notre Dame Stadium in South Bend. 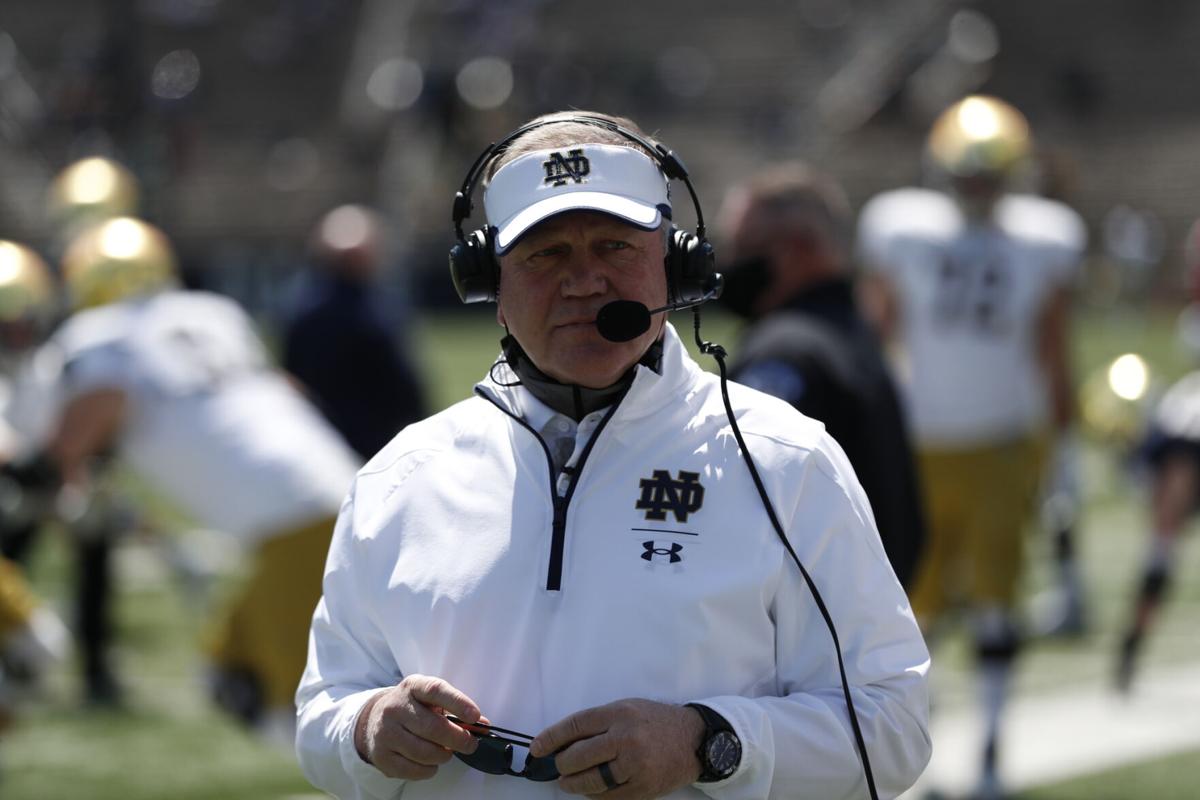 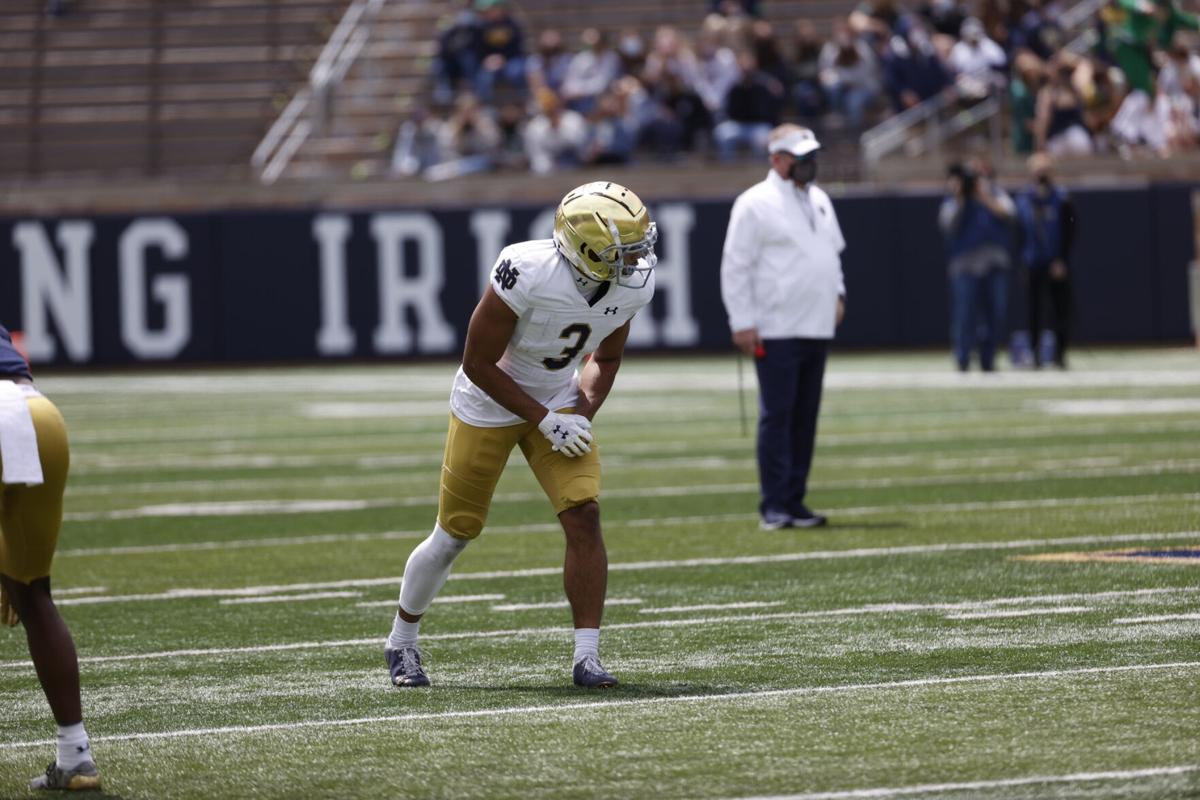 Notre Dame wide receiver Avery Davis waits at the line of scrimmage before the snap during the first half of Saturday's Blue-Gold Game at Notre Dame Stadium in South Bend. 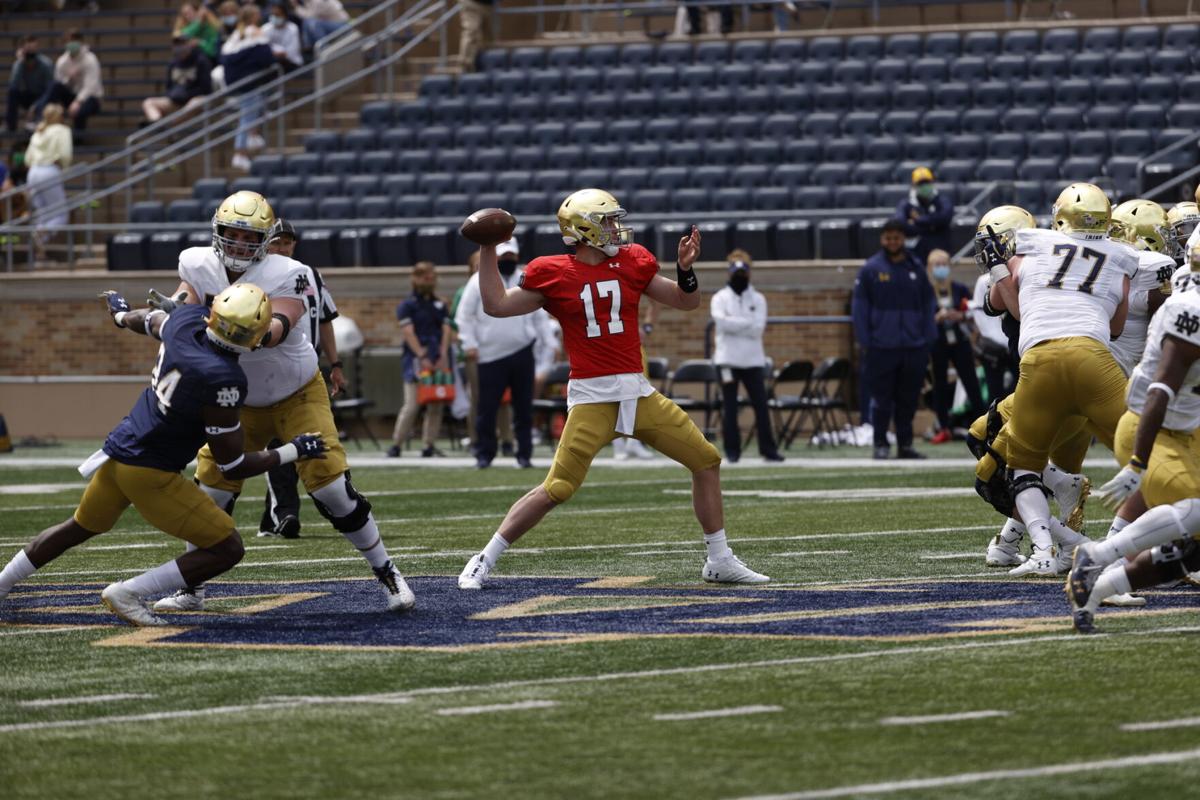 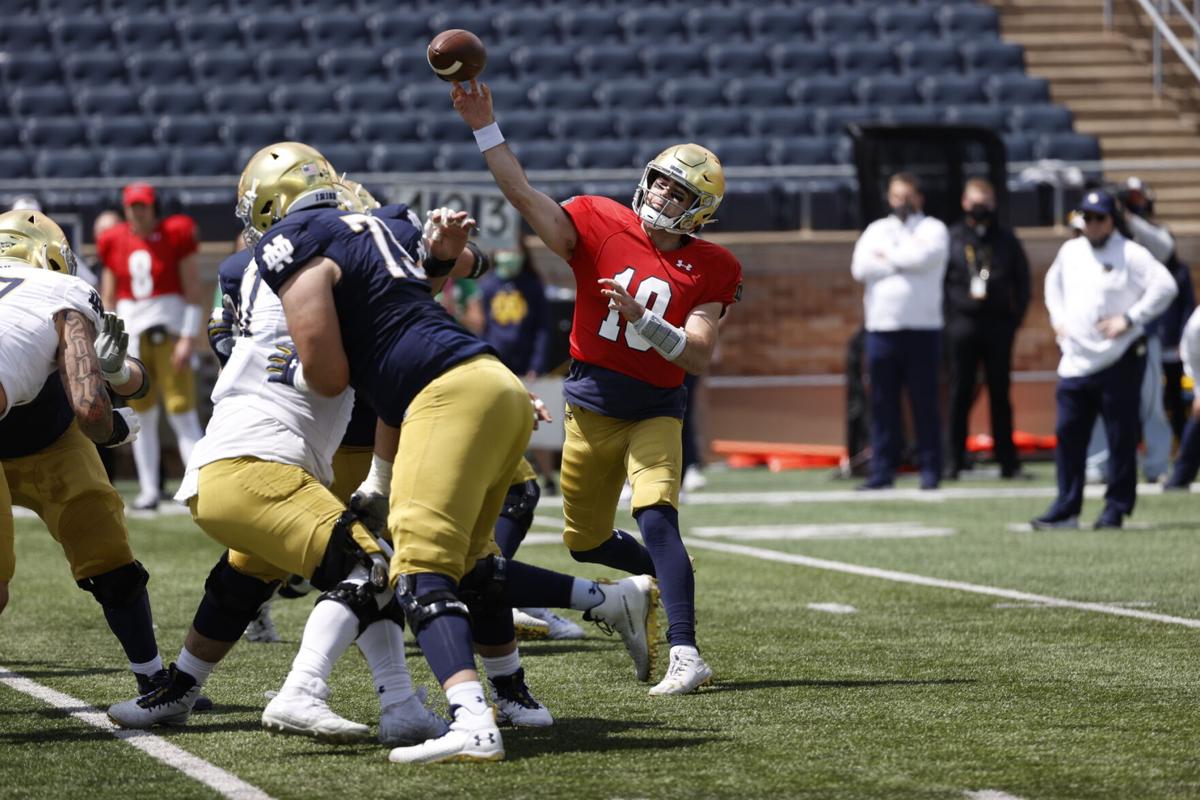 Notre Dame quarterback Tyler Buchner looks down field during the second half of Saturday’s Blue-Gold Game at Notre Dame Stadium in South Bend.

Notre Dame wide receiver Avery Davis waits at the line of scrimmage before the snap during the first half of Saturday's Blue-Gold Game at Notre Dame Stadium in South Bend.

SOUTH BEND — Notre Dame football’s spring came to a close on the turf of Notre Dame Stadium on Saturday.

For the first time in two years, the Blue-Gold Game was played, and the feeling of football was alive again for those who were fortunate enough to attend.

“We really wanted to put guys out there and force them to compete in some of the more difficult situations they could be in,” Notre Dame coach Brian Kelly said. “They’ll be supported in the fall by veteran players or scheme, and we wanted them out there in the most difficult circumstances. So that’s why you saw some sacks, and that’s why you saw maybe not as many points. But it was all calculated, and we got exactly what we wanted out of it from that perspective. We’ll have a great evaluation that allows us to move in the direction we need to into the offseason.”

If anybody went into Saturday’s contest with hopes of finding a clear-cut leader at the quarterback position, they would’ve been sorely disappointed.

Senior Jack Coan, sophomore Drew Pyne and Buchner all received ample playing time, with each showing in spurts why any of the three could start in the fall.

Coan — the Wisconsin transfer — has been deemed the favorite at this point with the amount of collegiate experience he brings to the offensive huddle. He flashed early with a perfect 32-yard pass along the left sideline to Joe Wilkins Jr. during the first drive, but a sack quickly killed the momentum created from the eye-opening play.

That’d be a theme on Saturday for Coan, as he finished the afternoon 18-of-32 for 197 yards and one interception. The two times Gold had opportunities to score touchdowns, Coan overthrew Avery Davis in the end zone in the second quarter and Wilkins Jr. couldn’t hold on to a pass across the middle after being blasted by safety Litchfield Ajavon in the third.

Pyne had similar numbers (11-of-23, 146 yards, INT) and similar flashes, but he failed to convert any of his drives into end zone trips. The sophomore showed off the ability to be accurate on roll-out throws and passes along the sidelines. He also featured his wheels on occasion to escape from the pocket when needed, but similar to Coan, turnovers and sacks ended drives before they could come to fruition.

Perhaps the surprise performance came from Buchner. The 6-1, 207-pound freshman looked poised, knowing when to throw and when to pull it down and take off. He went 6-of-9 for 140 yards passing and scored on the ground with a seven-yard TD scamper that put Blue up 10-3 in the third quarter.

The connection between Buchner and wideout Brendan Lenzy led to the second touchdown of the day. Eighteen and 37-yard grabs by Lenzy from Buchner setup a one-yard TD run by running back Leo Albano in the fourth.

“I think all of them obviously have work to do,” said Kelly of his quarterbacks. “I don’t think anybody went into this game expecting one guy to dominate. We knew that there were some things to work on because you don’t have the full rotation of players you want. … I thought Tommy (Rees) did a great job of giving them all the varied throws that we put in so we can continue to help them grow and develop. All-in-all, I thought all of them did a fine job of what we asked them to do in this format.”

The Irish offensive line lost four of the five starters from a year ago due to graduation or an early exit for the NFL. Three of them — Liam Eichenberg, Aaron Banks and Robert Hainsey — were picked within the first three rounds during this year’s NFL Draft.

With talent like that gone in abundance, it’s unlikely to expect the Irish offensive line — though talented in its own right — to be ahead of the defensive line in early May.

The d-line wreaked havoc in the trenches on Saturday, accumulating nine sacks from both sides during the game. On Blue, Isaiah Foskey, Howard Cross III, Jayson Ademilola and Justin Ademilola all registered a sack. And on Gold, Marist Liufau, Myron Tagovailoa-Amosa, Jordan Botelho, Nana Osafo-Mensah and Kurt Hinish each earned a sack as well.

The running game was also handled well by the defense. Gold’s leading rusher Kyren Williams only managed 16 yards on three carries, while Chris Tyree ran for 43 yards on 10 carries for Blue.

Despite the numbers, Notre Dame’s performance along the offensive line would’ve been better had Jarrett Patterson been available. And with four months left before the regular season starts, there’s still plenty of time for this group to improve before then.

“Right now, we’re focused on getting the best five together,” said Kelly when asked about the performance of his offensive line. “(Saturday) was a tough situation for them. We could’ve made it a lot easier for Rocco (Spindler), Blake (Fisher) and Dillan Gibbons snapping for the first time. We could’ve made it really easy, but that wouldn’t have been the best thing for this football team moving forward. … (Saturday) allows us to evaluate much more clearly about where we need to go to be a championship football team.”

Throughout the spring, Kelly has preached the importance of wide receivers Lawrence Keys, Lenzy and Wilkins Jr. reaching that next level by the time the 2021 season reaches its beginning.

“Their attention to detail has to be better,” Kelly said. “They want to do it. They’re capable of doing it, and we’re going to stay the course. And when they get there, they will ascend to the level that we need them to play at. … They’re 100 percent all-in. I thought they flashed (Saturday), but we’ve got some work to do with the details.”

On defense, the linebacker group had a good day overall. Blue’s Jack Kiser led all tacklers with eight tackles, and Bo Bauer was behind him with three solo tackles and a tackle for loss. Gold’s Liufau had five tackles, including one for loss to go along with a sack.

Irish tight end Michael Mayer was held out for precautionary reasons, which opened the door for a couple of other tight ends to show off in the passing game. Freshman Mitchell Evans had three catches for 59 yards for Blue and senior George Takacs grabbed three of his own for 32 yards for Gold.