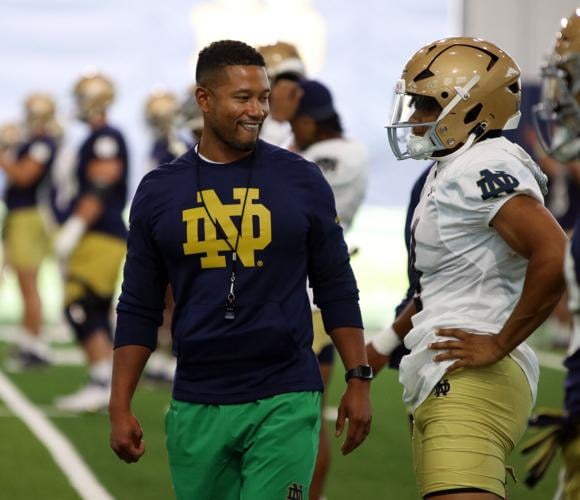 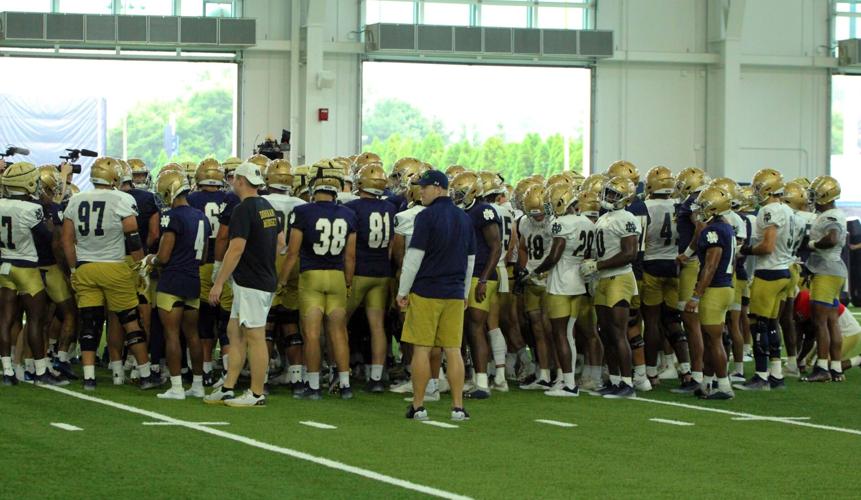 The Notre Dame football team huddles up before practice Friday at the Irish Athletics Center in South Bend.

The Notre Dame football team huddles up before practice Friday at the Irish Athletics Center in South Bend.

SOUTH BEND – The calendar has turned to August, which means college football is only a few weeks away from making its return.

The Notre Dame football team began its preparation for the regular season with the start of fall camp at the Irish Athletics Center on Friday. In just four weeks, the Fighting Irish will clash with Ohio State on the road in primetime.

“We’re excited to get back out there,” Notre Dame head coach Marcus Freeman said. “Our kids and our coaching staff were just itching to get back out there on that field. I was pleased with the effort. … Like any Day 1, I knew the energy would be there. This is just the starting point, and we’ll have to continue to move forward from here.”

The energy from the players was noticeable early on within the IAC, but at points during the warm and humid late morning, some players couldn’t beat the elements.

Offensive linemen Blake Fisher and Zeke Correll were among the few that had to take extended breaks during the 2 and-a-half hour practice.

While it’s understandable some players were worn out based on the combination of harsh weather and opening day, a fiery Freeman could be seen in the middle of the team huddle expressing his feelings of non-satisfaction after the end of practice.

“We have to get in a position to where our guys aren’t being pulled from practice,” Freeman said. “We have to condition our body, we have to develop fast because we have to be ready to roll right out of the gate.

“At the end of practice, I was trying to send a message to the players saying whatever they have to do to be ready for practice, they have to do it. We aren’t changing anything, because I believe what we’ve scheduled out is what we need to be prepared to go. … If they’re looking for us to pull back, it’s not going to happen.”

Tight end Mitchell Evans and running back Jadarian Price could be seen wheeling around practice with walking boots on after both players suffered foot injuries in the offseason.

While those two won’t be returning to the field for an extended period of time, several key players who missed spring practice were suited up for the first day of fall camp.

Diggs was wearing a red non-contact injury, but he looked very explosive during drills. Wilkins Jr. was moving well during warmups and drills but was limited during 11-on-11 action.

Patterson looked to be at full strength, while Davis was going through drills with a noticeable brace on his recovering knee.

On the defensive side of the ball, defensive lineman Jayson Ademilola was participating Friday after missing the spring with a shoulder injury.

Linebacker J.D. Bertrand was also suited up after he had offseason wrist surgery. Fellow linebacker Marist Liufau – who missed all of last season recovering from a broken ankle – was practicing on a limited basis too.

“The only players that definitely won’t be available to start the season are Joe Wilkins, Mitch Evans and J.D. Price,” Freeman said. “The rest of the guys we expect to be ready to go Sept. 3. Now, there is a progression for some of these guys getting back. We can’t just go zero to 100, so some guys are on limited reps like Logan Diggs and Marist Liufau.”

Tanona was injured in a car accident earlier this year on the way to a workout on Notre Dame’s campus. According to Freeman, the 6’5”, 284-pound interior lineman just hasn’t been able to recover fully since.

“He’s medically retired,” Freeman said. “After his accident, he kept trying to come back. But mentally and physically, he just wasn’t in a place where he was ready to play football.”

A four-star prospect from Zionsville, Tanona was one of five offensive lineman signed by Freeman in Notre Dame’s 2022 recruiting class.

While his football career is over, he’ll stay at Notre Dame to pursue his undergraduate degree.

“That’s the greatest thing about this place,” said Freeman of Notre Dame’s education. “At some point, the game of football is always going to be over. But if you have an opportunity to get a degree from this university, you have a chance to be successful.”