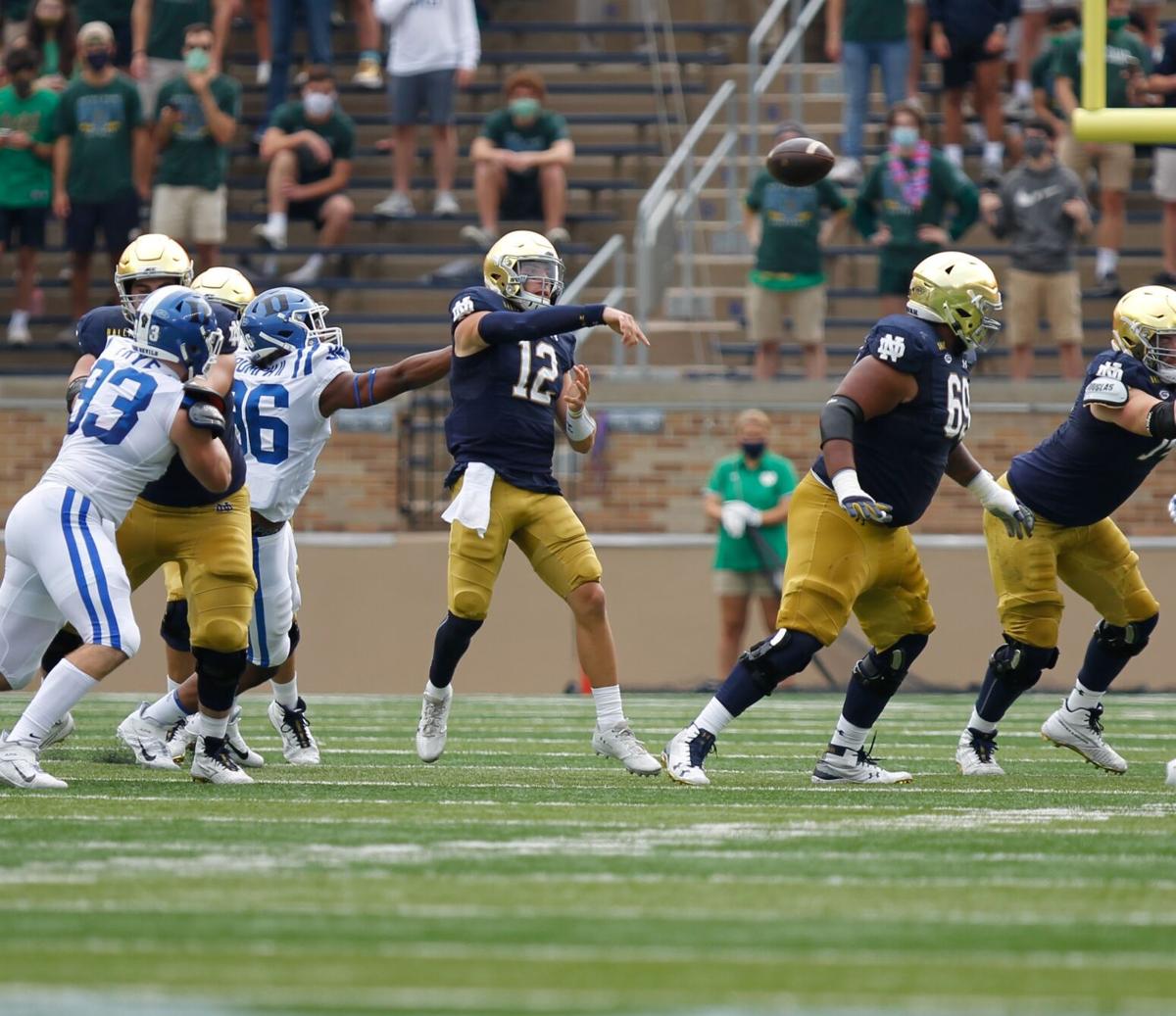 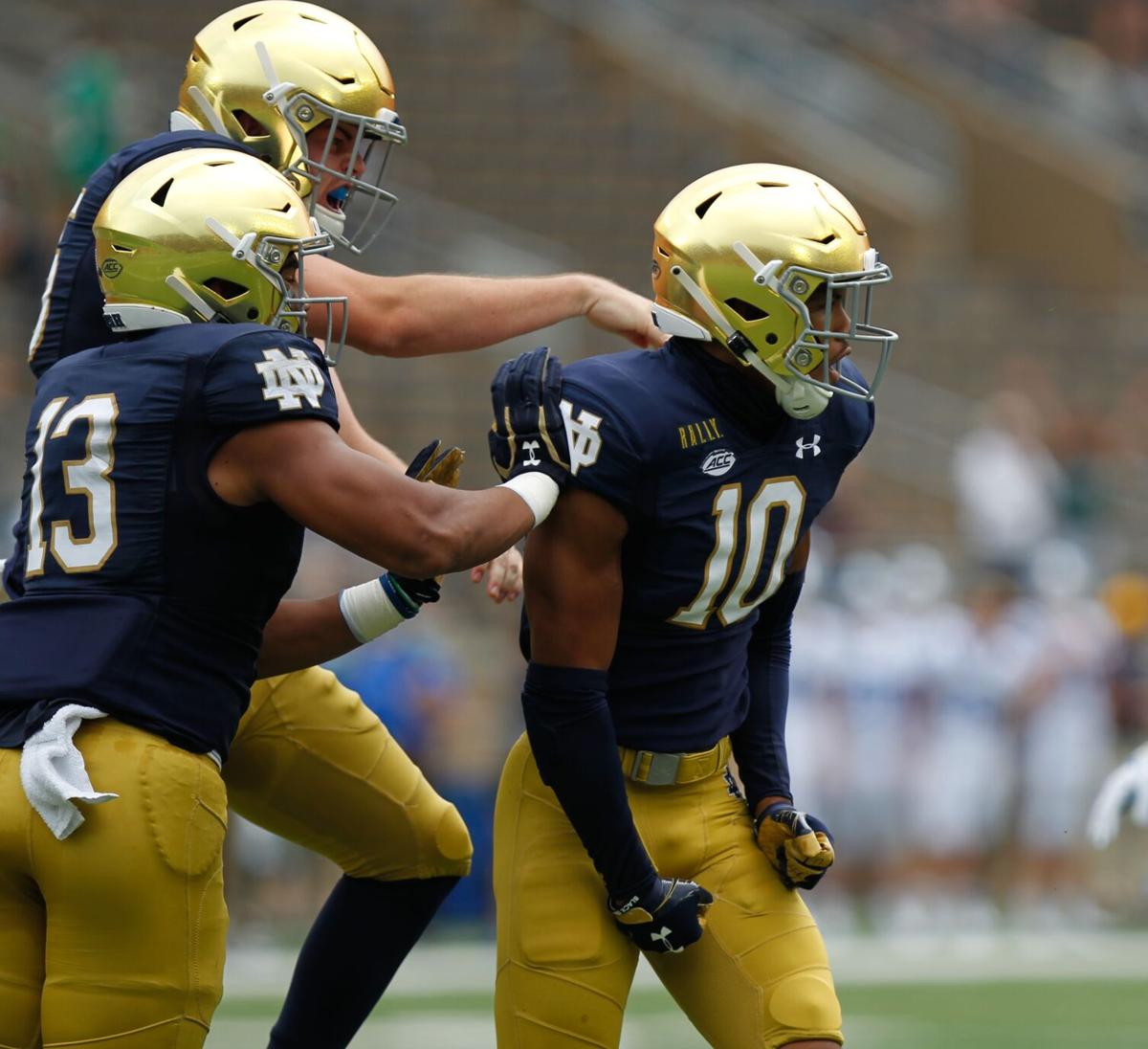 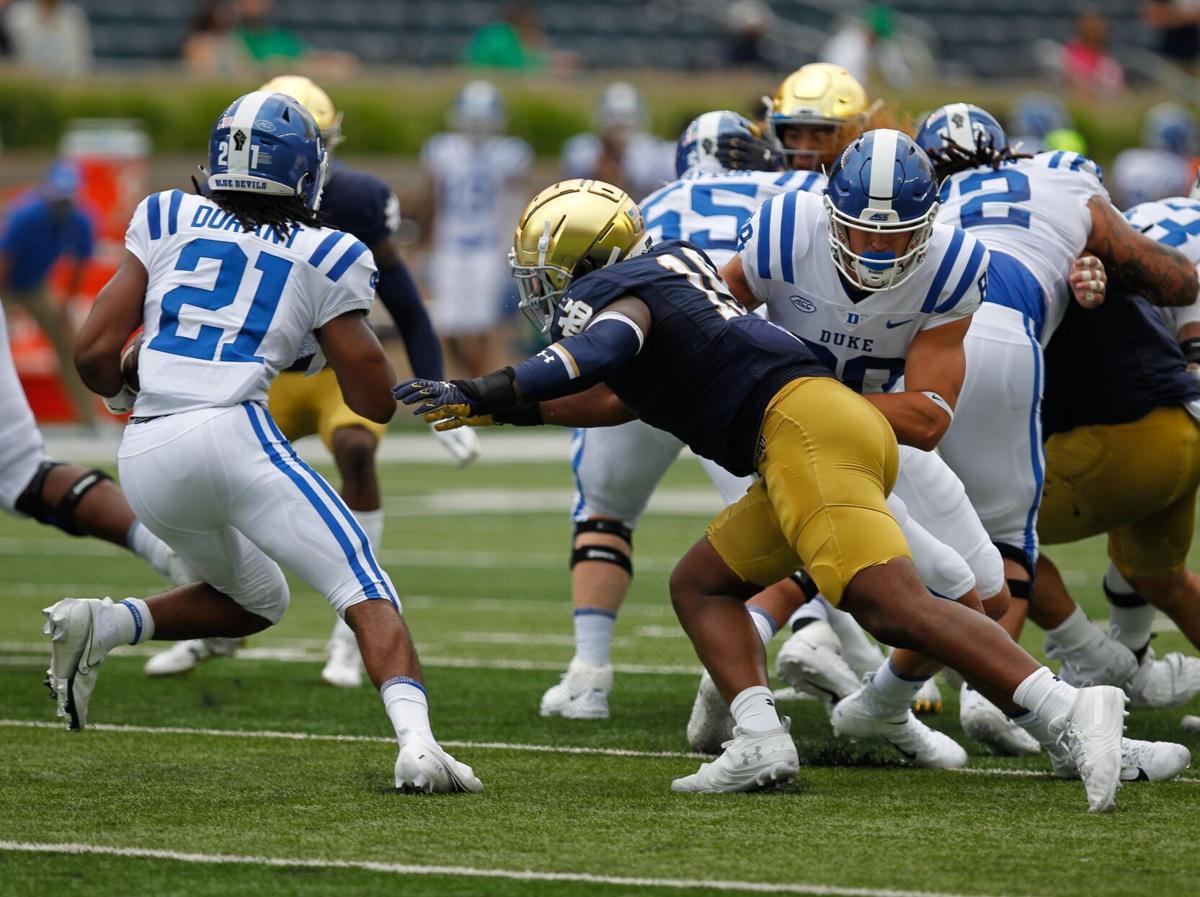 Duke’s Mataeo Durant rushes in the first quarter at Notre Dame while Irish defensive lineman Justin Ademilola goes in for the tackle. 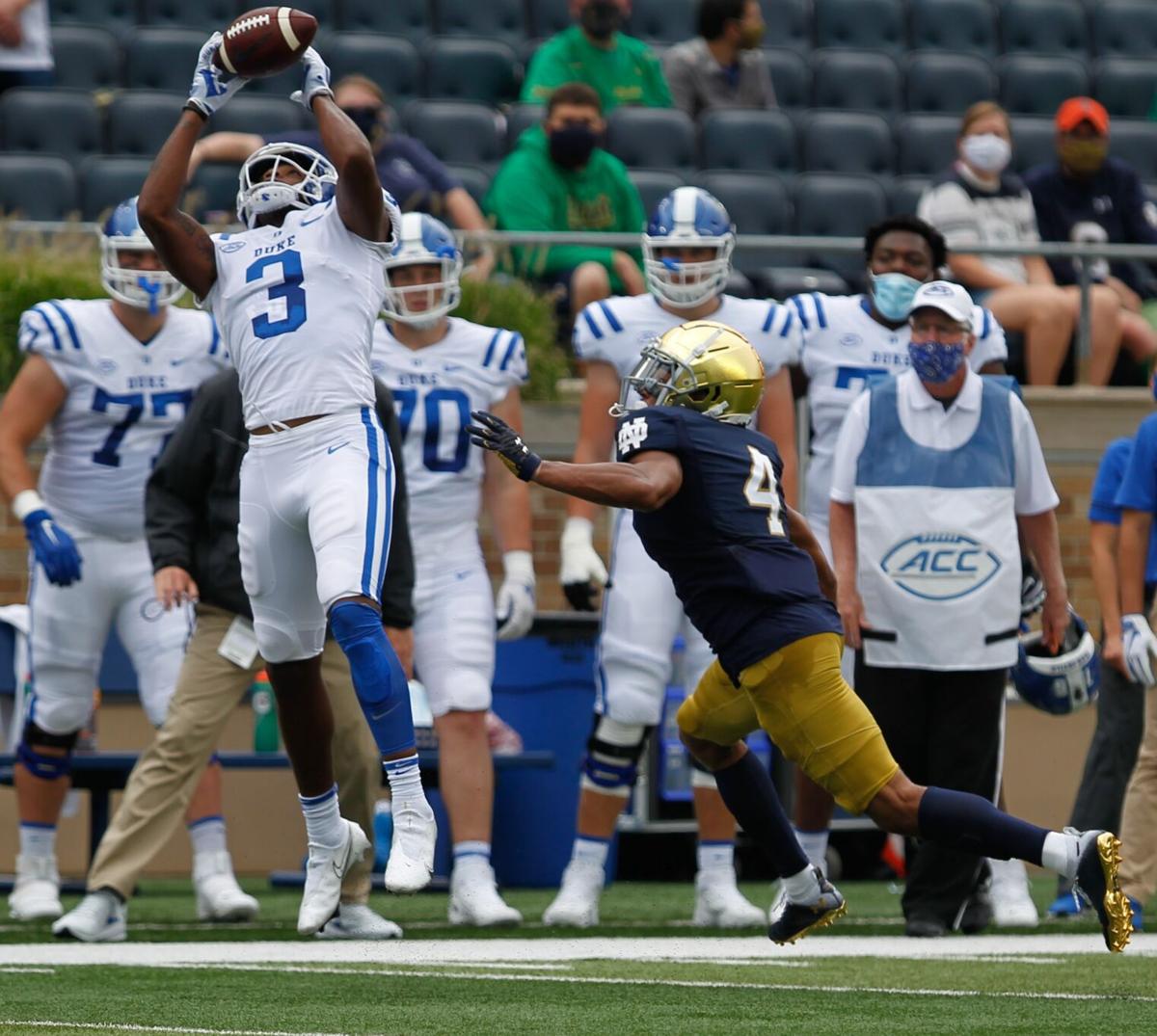 Duke’s Mataeo Durant rushes in the first quarter at Notre Dame while Irish defensive lineman Justin Ademilola goes in for the tackle.

SOUTH BEND — A win is a win, no matter how they draw it up.

While it wasn’t the cleanest game Notre Dame has even played Saturday, the No. 10 Fighting Irish made enough plays to defeat Duke, 27-13, to win its season and Atlantic Coast Conference opener at Notre Dame Stadium.

It was a big day offensively for redshirt freshman running back Kyren Williams. Making his first collegiate start, he rushed for 112 yards and two touchdowns and had 93 receiving yards, 75 of those coming on one play. He led Notre Dame in both rushing and receiving yards in the contest.

“During camp, I had taken a lot of reps,” Williams said. “I feel like my (work) load is exactly where I want it to be. I definitely thought, for sure, that I was going to have a big impact in this game. I came in with a great mindset and a great confidence. I knew that if I just played my game, I could play well.”

The first quarter belonged to the visiting Blue Devils, as they outgained the Irish, 151-7, in yards. Duke only had three points to show for it, though, on a 29-yard field goal from Charlie Ham with 3:53 to go in the frame. Notre Dame’s defense forced a turnover on downs on the Blue Devils’ first possession and two punts on its final two possessions of the first quarter.

“We prepared all week for a certain type of offense, but Duke came out with something different that we really didn’t expect, so we had to make a lot of adjustments,” linebacker Jeremiah Owusu-Koramoah said. “They have a lot of talented players.”

Struggling on offense, the Irish dipped into its bag of tricks in the second quarter. Facing a punting situation at its own 21-yard line, Notre Dame called a fake punt. Sophomore punter Jay Bramblett took the snap and ran it 14 yards to pick up the first down, extending the drive.

This appeared to wake up the Irish offense, as they would drive 65 more yards after that and score on a one-yard touchdown run from Williams. Notre Dame took a 7-3 lead with 10:39 to go in the second, a lead they would never relinquish.

“My thought process was I hope the heck it works,” Notre Dame coach Brian Kelly said. “That was my first thought process. It was there. We saw it on film. We felt like it was there. It was one of those that you needed to call it in a very vulnerable area.”

The teams traded field goals the rest of the quarter to make it a 10-6 affair at halftime.

Williams’ second touchdown run would prove to be the game-winner midway through the third quarter. Facing a fourth-and-one from the Duke 26-yard line, the redshirt freshman took the handoff from quarterback Ian Book, bounced it outside, and found space for a 26-yard score.

“We were kind of able to dictate their defense,” Williams said. “We knew what they were going to be in, so (offensive coordinator Tommy) Rees took advantage of that and I was able to make a play.”

Duke’s only touchdown of the game came on a short field. Starting at the Irish 39-yard line, the Blue Devils ran five plays before quarterback Chase Brice ran it in from two yards out, cutting the deficit to four with 2:24 to go in the third quarter.

After allowing 151 yards in the first quarter, the Irish defense only allowed 183 over the final three quarters.

“We executed to the best of our abilities … with the adjustments that we made, I thought that was the best aspect of our play on defense today,” Owusu-Koramoah said.

After struggling at times Saturday, Book finally converted on his first touchdown pass of the season in the fourth quarter. He connected with senior Avery Davis, who made a tough catch for a 17-yard touchdown reception.

Book finished 19-of-31 passing for 263 yards, a passing touchdown and an interception.

“I liked the way the energy was today,” Book said. “We might have had a slow start in the first half — I didn’t see anybody shy away or anything like that. Everybody was like, ‘OK, we’re ready to go.’”

“I thought it was up and down,” added Kelly of Book’s performance. “You know, I think Ian made some really nice plays for us. What I had said to Ian on the sideline was he has to make some of the easy plays, the lay ups, if you will.”

Jonathan Doerer booted another field goal late in the fourth to provide the final points of the game.

The victory was Notre Dame’s first as a conference member in program history. It will play a non-conference game next, as they host South Florida on Sept. 19.