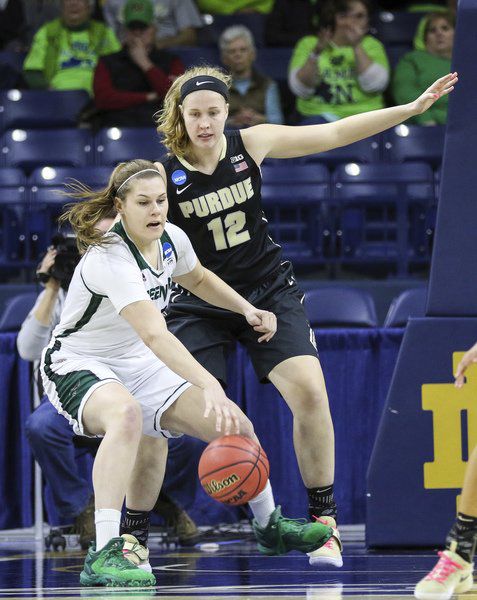 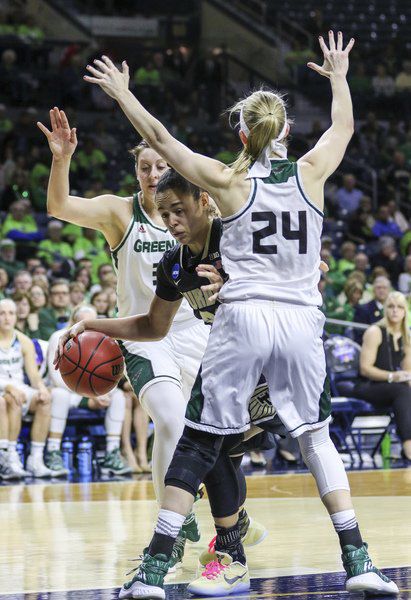 Purdue sophomore Dominique McBryde tries to find space under the basket while being guarded by Lexi Weitzer and Allie LeClaire of Green Bay during the first quarter of Friday night’s NCAA Women’s Basketball Tournament first-round game at Notre Dame.CHAD WEAVER | THE GOSHEN NEWS 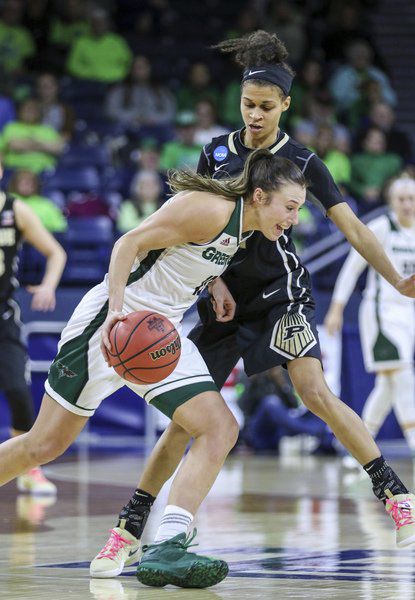 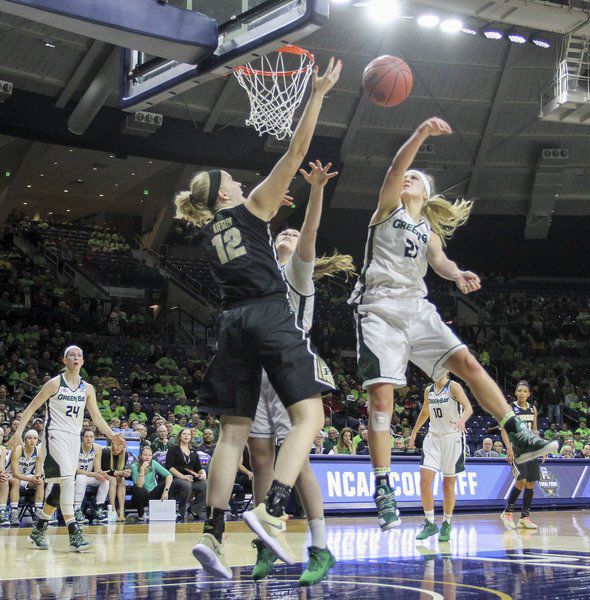 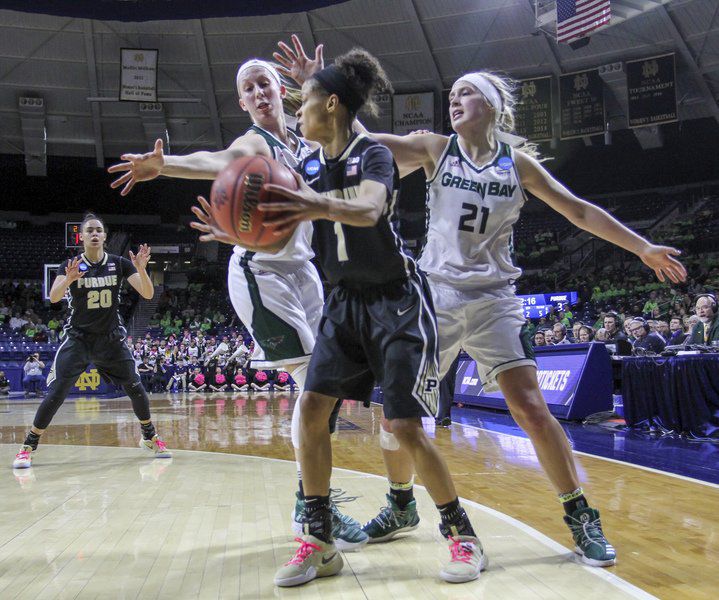 Purdue sophomore Dominique McBryde tries to find space under the basket while being guarded by Lexi Weitzer and Allie LeClaire of Green Bay during the first quarter of Friday night’s NCAA Women’s Basketball Tournament first-round game at Notre Dame.CHAD WEAVER | THE GOSHEN NEWS

SOUTH BEND — It was a homecoming for Purdue women’s basketball coach Sharon Versyp that resulted in a NCAA tourney first-round win, but due to the efforts of the Green Bay Phoenix it was not an easy task.

The Boilermakers opened an early lead, let Green Bay back into the game, opened another lead only to let the Phoenix get within five points before pulling off a hard-fought 74-62 win Friday night at Notre Dame’s Purcell Pavilion.

“Green Bay is extremely tough,” said Versyp who is a 1984 Mishawaka High School graduate and a 1989 Purdue grad. “We always have a battle when we play them. They will out-physical you for 40 minutes.”

“The start of the third period was key for us,” Versyp said. “They had made a run at us, but we hit some key 3-pointers and we made our free throws down the stretch.”

Purdue (28-5) moved to the second-round, also at Notre Dame where they will meet the Irish Sunday at a time to be determined.

“I’m very proud of my girls, despite the disappointing finish,” Phoenix coach Kevin Borseth said. “We had battled our way back into the game in the second period so we felt at halftime the start of the third period was critical for us. What did we do but come out and turn the ball over on three straight possessions. We didn’t get a good start. We were not comfortable.”

Purdue had an inside presence from the start in 6-1 freshman Ae’Rianna Harris from Indianapolis. She scored 12 points (6-of-6 field goals) to go with seven rebounds and three blocked shots.

“Harris is becoming more dominate,” Versyp said. “She is an explosive athlete. She is a fun one to watch. Some of that is coming through a Big Ten season.”

The Phoenix didn’t have an inside force until Purdue had opened its first lead and Borseth brought 6-3 red-shirt freshman Madison Wolf off the bench.

Wolf netted eight points and grabbed four rebounds, but just as important slowed down the Boilermakers on the inside.

“When she came in the game we had a presence around the basket,” Borseth said. “Had we had that kind of presence early in the game things might have been a little different.”

Senior Ashley Morrissette tossed in 24 points to top the Boilermakers. Freshman Dominique Oden chipped in with 13 points, including a huge 3-pointer with 1:54 left to play that extended the Purdue lead to 65-57.

“We have been seeing her hit big shots all season,” junior teammate Keys said of Oden’s 3-pointer. “The one today really boosted our lead.”

“We were trying to take away the 3-point shot,” Versyp said. “We wanted them to shoot as many 2-pointers as possible.”

‘Borseth felt his team had their chances.

“We just turned the ball over 23 times and gave Purdue a lot of points,” the coach said. “They got 16 points off our turnovers. That is one of the reasons why we gave up more points than we normally do.

“We just don’t see the size and talent level that Purdue players have often enough.”

Borseth is in his fourth season at Green Bay and he has taken the Phoenix to three straight NCAA appearances.

“In three years we have faced LSU, Tennessee and now Purdue,” he said. “It’s not easy to get here and it is not easy to win once you do.”

That is the challenge of a mid-major, one Versyp is familiar with.

“I coached at a mid-major so I know what it is like,” she said. “Green Bay is very talented and they never give up. The mid-majors are the teams that no one wants to play.”