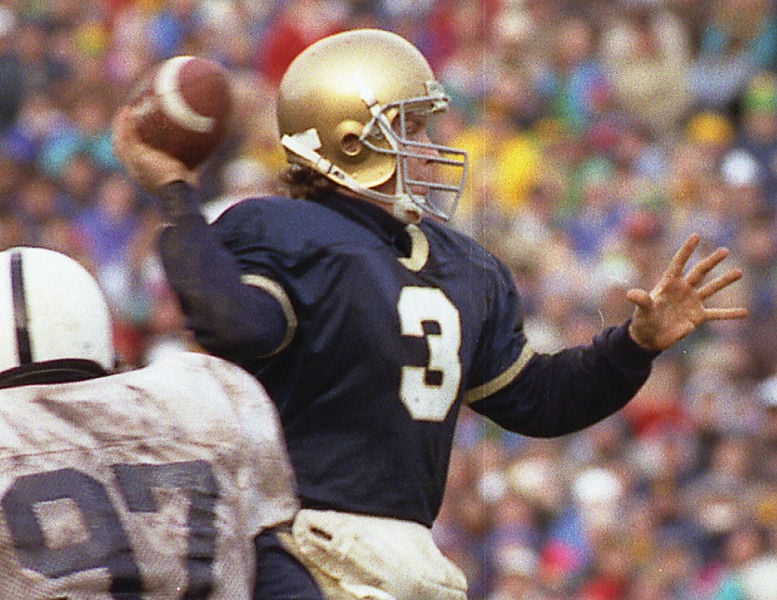 Goshen's Rick Mirer throws a pass against Penn State on Nov. 14, 1992, in the "Snow Bowl," the last game Mirer played in at Notre Dame Stadium. 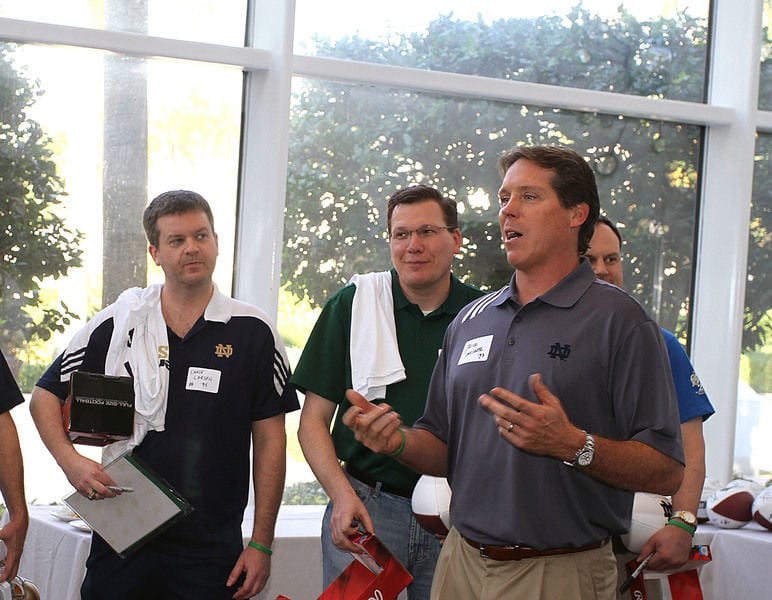 In this file photo, former Notre Dame quarterback Rick Mirer addresses the crowd gathered at the Rally for ND Scholarships at the Hyatt Regency Pier 66 in Fort Lauderdale, Florida, during festivities leading up to the 2013 BCS National Championship game. 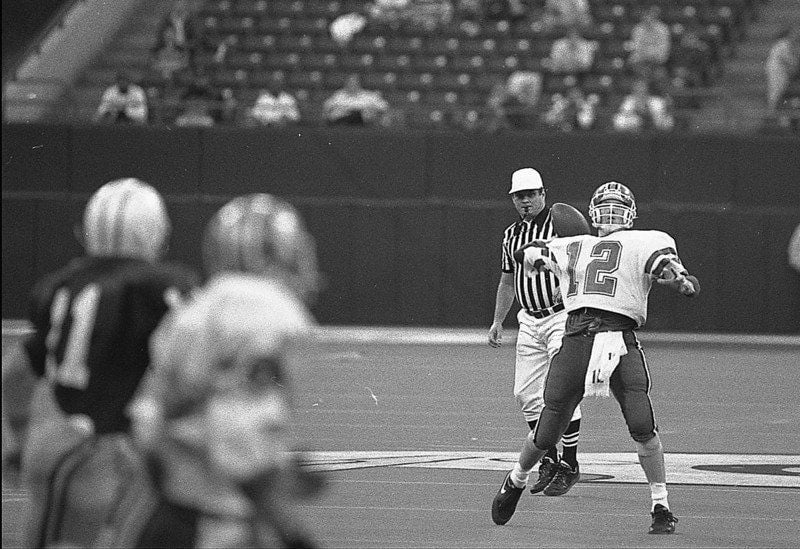 Goshen's Rick Mirer throws a pass against Penn State on Nov. 14, 1992, in the "Snow Bowl," the last game Mirer played in at Notre Dame Stadium.

In this file photo, former Notre Dame quarterback Rick Mirer addresses the crowd gathered at the Rally for ND Scholarships at the Hyatt Regency Pier 66 in Fort Lauderdale, Florida, during festivities leading up to the 2013 BCS National Championship game.

GOSHEN — From time to time, Rick Mirer still opens his mailbox to find a piece of history that takes him back to a different time.

Often it's a Sports Illustrated from Sept. 24, 1990. The headline on the iconic cover reads, “Golden Boy.” A sophomore Notre Dame quarterback wearing the No. 3 has his arms stretched out as he enters the endzone to help the Irish beat Michigan.

That quarterback, of course, is Mirer.

Instead of people walking up and asking the 44-year-old to autograph the historic cover, Mirer said more people, now, mail the cover to his home in the San Diego, California, area and ask for him to sign it.

“It’s always fun to see those pictures and remember those moments,” the 1989 Goshen High School graduate said via phone.

Now, Mirer’s football days are nothing but memories. It’s been 10 years since he last played competitively, retiring from the NFL in 2004 after 12 seasons in the league and three years as a starting quarterback at Notre Dame.

Today the “Golden Boy” finds himself competing in a more red and white industry. But for him, it’s still black and gray. There’s winning and losing. He’s still competitive.

But Mirer also has another job since retiring from the NFL that he said is like a full-time job.

And now Mirer is learning what it was like for his dad, Ken, to watch a son play football.

But those years also exposed him to a new hobby: exploring wineries and learning about wine.

“I met a lot of interesting people,” Mirer said of his time in the bay area. “I was always interested. I was just a consumer just educating myself a little about wine.”

After he retired, some of those people he met help him make his transition into the business world.

Mirer partnered with Rob Lawson, someone who had been in the wine industry who knew more about it, and together they launched Mirror in 2008.

“Getting started was the easy part,” Mirer said. “Growing, evolving, having things go in a predictable fashion, those were a little trickier. But the launch part was simple.”

While Mirer might not be able to compete in the NFL anymore, he still finds ways to be competitive. In fact, that’s his favorite part of the wine industry. It’s a competitive business. It’s something he has to work hard at to see a reward.

In a sense, it’s just like the game of football.

“It’s hard to believe it’s been over six years now working on it.”

When Mirer was growing up in Goshen and people had discussions about what you want to be when you grow up, Mirer always said he wanted to play professional football. He knew the odds were stacked against him, but he couldn’t see himself doing anything else. It was the only thing that made sense.

As his years went on, he realized he couldn’t play in the NFL forever.

But he knew he needed something to keep him motivated. He needed a challenge. He needed competition.

Mirror, and his family, give him that.

“I have stuff to get up and do,” he said. “I think the hard thing for a lot of guys is, if they’re financially secure, and they’re just kind of relaxing, you just don’t have anything to wake you up. There’s no purpose in certain types of days. Everybody enjoys vacation, but a year of it straight is too long.”

In the Mirer household in San Diego, there’s a calendar of things to do.

None of the items on that calendar are Rick’s, or his wife, Stephanie’s.

That calendar is full of things going on for Morrison, Oliver and Charlie — Rick and Stephanie’s children.

Morrison is the oldest. He turns 16 in August and will be a sophomore in high school.

“We’re learning how to drive and everything,” Mirer said.

Morrison plays football and lacrosse. Rick used to coach him, but not any more.

Rick’s dad, Ken, was the head coach of Goshen’s first football team to win state in 1978. Growing up, Rick always assumed his dad would be his head coach when he made it to high school.

But then Ken stepped down just before Rick got to varsity.

“I didn’t really imagine him not staying with it until it happened,” Rick said. “Then it was like, ‘Okay. Well, we’ll just adjust.’ It wasn’t a traumatic thing.”

Ken opted to watch his son from the stands rather than be on the field.

The move allowed Ken to watch Rick not just at Goshen, but also at Notre Dame and then the NFL, where he was the No. 2 overall pick in the 1993 draft.

“In the end, my dad made the best decision for both of us, I’m sure,” Rick said. “It took away all the struggle of having conflicts with your old man and he got a chance to sit back and watch.

Rick remembered his dad as always wearing headsets during Rick’s games. Ken preferred listening to the broadcast of the game rather than hearing what other fans had to say.

Sometimes fans questioned Rick. Sometimes they criticized him. Sometimes, Rick said, they had no clue what they were talking about.

Now, watching Morrison, Rick understands why his dad liked listening to the radio.

Hearing other people talk about the game is the most frustrating part of being a fan in the stands for Rick, just like it was for Ken.

“Whether it’s positive or negative stuff, it’s intriguing to hear what people say and how they look at it,” Rick said. “I don’t think anybody means harm, it’s just like, ‘Wow, you’re not even close to what’s going on and actually happening.’”

So instead, Rick prefers to be on the field. He now coaches his middle son, Oliver, who is 13 and entering eighth grade, in Pop Warner football.

“I’m just more comfortable on the field than I am sitting back and watching,” Rick said. “That’s really not a surprise, now that I think about it.”

He coached Morrison when he was coming up, but opted to stop when Morrison got to high school. He plans to do the same for Oliver and with Charlie, who is 10.

With Charlie and Oliver, Rick enjoys driving them to all of their practices and tournaments. He likes keeping up with the schedule. He understands there will be a time when he won’t be able to drive them everywhere anymore.

“There’s a limited time of that,” he said, “and we’re trying to participate in everything and enjoy it while we can.”

It’s been 24 years since Mirer was on that Sports Illustrated cover. It’s been almost 26 years since his historic 1988 season at Goshen, still one of the most memorable moments of his life.

“To this day, the accomplishment at the end of that season is as rewarding as anything I ever did, even with all those other seasons,” he said. “It just was kind of fun to take a little town, a little squad, and go all the way and have that forever. That’ll never go away.”

While Mirer’s life doesn’t involve playing football anymore, and he doesn’t sign nearly as many autographs, it’s still very much a fulfilling life for him, one he enjoys.

For the first time, he worries about injuries. Not to himself, but to Morrison, Oliver and Charlie. As a player, he never feared getting hurt. As a parent in the stands, it runs through his mind all the time.

But he’s enjoying experiencing what Ken must’ve felt like in the stands at Foreman Field and Notre Dame Stadium.

He still treasures his last memory of Notre Dame Stadium, walking off the field against Penn State in the “Snow Bowl” after throwing a last-minute touchdown pass on fourth down and completing a two-point conversion to come away with a 17-16 victory on senior day.

And he knows he’s the answer to a trivia question, the last NFL rookie quarterback before Peyton Manning to hold the rookie records for pass attempts, completions and yards.

"That does seem like old news," he says, laughing.

It’s all a collection of memories. Just like the SI’s he finds in his mail every now and then.

“There’s things I’m super proud of, there’s things I really wish would’ve gone better or gone differently. We all have that,” he said. “Not everybody’s lucky enough to ride off in the sunset after winning the Super Bowl and have it all just end perfectly. There’s a ton of things you can’t control.

“All in all, I feel super lucky. Hopefully people say nice things forever, but legacy things I don’t think too much about. I’m just proud. Now I’m a proud parent, trying to raise these guys the right way and hopefully they’re next, going through some version of what I was lucky enough to go through. Time will tell.”